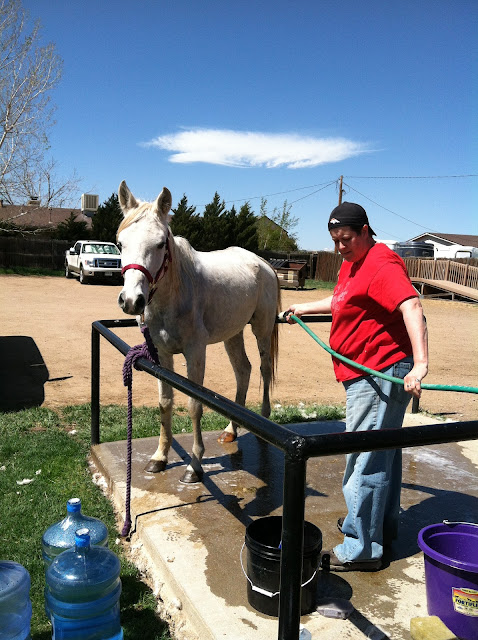 Guess what we did today? For the second time . . . Ashke did a great job. He let us shampoo him, including his belly and his legs. Then we rinsed him off with the hose set on mist. He just stood there and caged treats whenever he thought he could. J and I braided his mane. We shampooed his tail and rinsed it with the hose. No problem. Shampooed all four legs. Rinsed with hose. No problem. J even brushed his whole body to help him dry.

Here is a week ago: 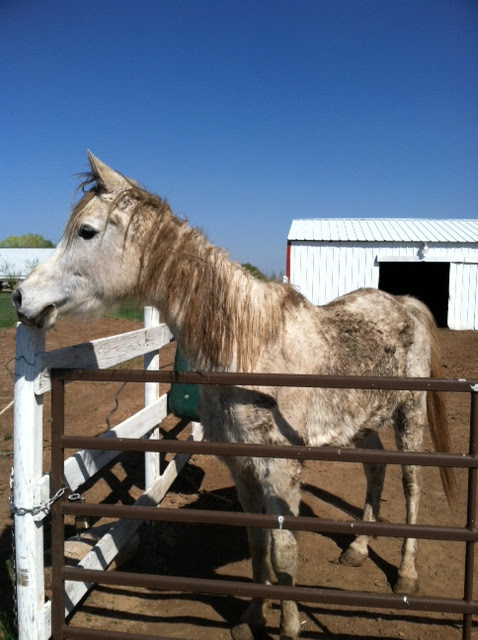 Today, after his second bath: 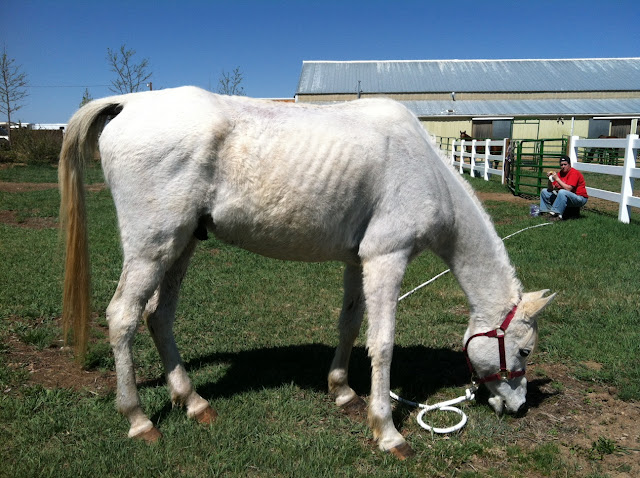 Does this even look like the same horse? He's still really thin, but putting on weight and gaining energy every day. When I was washing him I discovered an area on both of his hind legs that is covered with what looks like scabs. I asked one of the other women at the barn if they had ever seen something like that. From what she said, the scabs are caused by the skin being irritated by splashed urine. I guess this is typical when a horse is on hard dirt, or ground, because the urine isn't soaked into the dirt and it splashes instead. I am going to try to coat the area with Bag Balm and see if that helps. He is standing on sawdust, and that keeps the urine from splashing, so hopefully the scabby area with improve.

After the bathing and some grazing we moved to the area. Ashke has started to balk when asked to walk forward. It has gotten bad enough that I decided to use the lunge line to encourage him to walk forward on a verbal cue. I ran the lunge line behind his hind legs and when he refuses to walk forward I tighten the line around the back of his legs and he moves forward away from the pressure. It is very effective in encouraging him to walk on a verbal command. We walked over to the round corral and I worked with him for about 30 minutes. He still tires pretty quickly. After the round pen we walked him back to his stall and tucked him in for the day.

Here are a couple of videos of him working in the round pen.