We left at 6 am for the drive to Texas - me, JJ and L. JJ drove their F-350 and pulled L's 3 horse slant-load horse trailer. I walked down the hill from our place and met them on the road. I was early, in part because I didn't sleep well the night before we left. I don't think I fell asleep until 1 am and I woke up before the alarm went off at 5 am. To say I was feeling a tad bit nervous would certainly be an understatement. I could only hope Ashke was in a little bit better shape than when we were there three weeks ago.

The trip down was pretty uneventful. We took I-70 East to Limon and then 287 due south to Amarillo. It has to be some of the most uneventful land in the country. I do have to say that Oklahoma has landscape in the form of cliff walls and arroyos. No trees. Except where home owners have planted them around their homes. In fact, the majority of the drive looked like this: 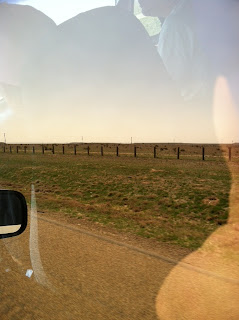 We spent most of our time on the drive down talking and sharing stories. It was really nice to be able to get to know them better and we all seemed to enjoy our time together. They are both funny and articulate and made good traveling partners. We stopped for gas twice on the way down, but mostly just drove. We made it in 8 hours, which was pretty good time pulling the trailer. We expected the trip back to take 12 hours.

When we got to Amarillo we had a great time trying to find Steve's house, since I was pretty wiped at that point. In fact, I mistakenly caused JJ to drive the wrong way on a one way frontage road (roads in Amarillo are jacked up to say the least.) I had to call J and get directions because Amarillo confuses me in a way no other city has ever done. We got straightened out and ended up at Steve's house about 4pm. This is what we found: 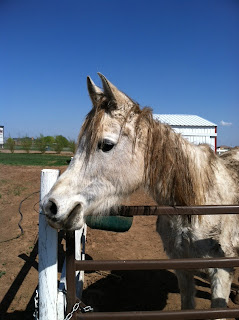 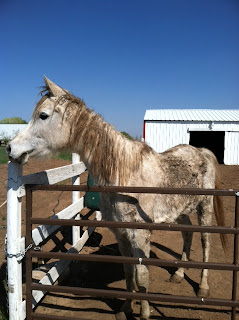 Although he was as filthy as he was three weeks ago, his attitude had improved, his eyes were brighter, and he had put on between 50 and 75 lbs. He was very interested in the trailer and what was happening, but seemed relaxed and comfortable. With treats, I was able to put the halter on him and lead him out. While JJ and L got the trailer open and ready we wandered around the farmstead and did this: 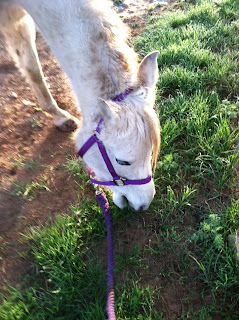 Ashke thought the grass was wonderful and I let him eat for about 20 minutes. More than that and it could founder him (causes inflamation in the laminitis bones in his feet). He loved the opportunity to fill his stomach before we started trying to load him in the trailer. When I figured he had enough we moved to the trailer and fun trailer games.

Ashke didn't want to load. As soon as he got close he would throw his head up in the air and pull back, his eyes wide and scared. I knew from talking to Steve that the last time he was trailered it had entailed a fight and he had trailered home sick. I figured it would take some patience and time to get him past that trauma. There were two things I needed to address. The first was his pulling back. If he pulled back and pulled me out of the trailer, it sent a message that he was controlling the situation and that if he kept doing so, he didn't have to get into the trailer. Second, I didn't want to make loading into the trailer a fight. I wanted to convince Ashke that loading into the trailer was easy and fun.

I asked L if there was a place in the trailer where I could secure the rope so that when Ashke pulled back he wouldn't pull the rope out of my hands or pull us away from the trailer. She showed me a hook at the end of the trailer and I wrapped the rope through it and on JJ's suggestion we left him tied there to think about it. We went around to the side of the trailer in the shade and sat and waited for him to work through what we were asking him to do. Ashke knew by this time that we had treats - Apple flavored oat treats and he couldn't quite reach us to get one. He was also very interested in what we were doing and feeling a little frustrated that we were ignoring him. At the point where I figured he was ready to try again, we got up and went back into the trailer to try.

After talking with L for a bit, we closed the top chute and I used it to anchor the rope so that I could move Ashke closer to the end of the trailer without him pulling away from me. We got him right to the edge. And waited. And waited. L came around with a lunge line and asked me if I wanted to rope him (run the rope around his haunches and pull him into the trailer). I told her I wanted to wait and see if Ashke could figure out he wasn't going to be hurt and step into the trailer on his own. She agreed and came up into the trailer with me. We turned our backs and started talking about nonsense, listening for him to step in. Finally, after a couple of failed attempts (he put his foot up and pawed the floor and then pulled back) he stepped up into the trailer. We gave him a lot of positive attention and treats, letting him stand in the trailer for ten minutes or so, then we turned him around and walked him out.

I walked him in circles around the trailer, letting him look around and explore his surroundings. Ashke snorted the entire time. He was alert and interested. When we tried to walk back into the trailer, he balked at the edge again. I asked JJ and L if we could rearrange the hay in the back of the trailer, so that when Ashke pulled back and came forward he wouldn't hit his chest on the end of the divider. We made those adjustments and within a few requests, Ashke walked into the trailer for a second time. This time we closed the gate and kept him in the stall for fifteen minutes or so, petting and praising his effort and feeding him lots of treats (so many I was forced to buy another jug of them later that night.) When I went to release him, he started trying to back out of the stall when his feet slipped and he almost went down. We freed him from the chute and got the gate out of his way. I half expected him to charge past me and out of the trailer, but although he was nervous he waited for me to lead him out of the trailer. (I have to say I love the fact that you can turn a horse around and let him walk out of the trailer instead of backing out.)

We were done for the day. I was exhausted and felt like handling him any more wouldn't help our cause. I put him back into the corral while JJ and L moved the trailer and then unhitched it. We were leaving it on the property for the night. We went to our hotel, did a little bit of horse treat shopping and then went to dinner at the Saltgrass. Dinner was yummy. Back at the hotel I didn't last very long and went to bed early after we made plans to wake up at 6 am.

Again, I didn't sleep well. We met for breakfast and then loaded up.

When we got back to Steve's we found this: 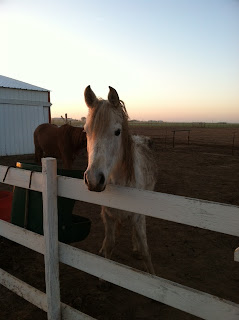 While JJ was hooking up the trailer, I let Ashke eat some grass. 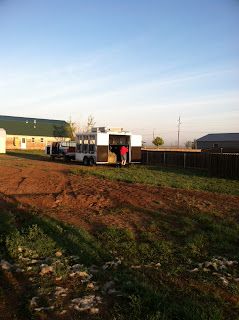 L had the great idea of picking all of the grass near the barn to take and fill his feeder in the trailer. After about fifteen minutes of grazing I moved Ashke over to the trailer. I thought he was going to follow me in, but about that time K came out of the house to see what was going on. Ashke positioned himself as far away from her as possible and was much more interested in watching her then in paying attention to me. Finally, she moved to the other side of the trailer and out of his view. I went to move the hay at the front of the trailer and when I did I took a hold of his leadrope. He stepped forward and into the trailer. Easy peasey. 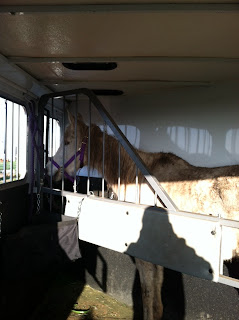 Ashke was a trooper on the drive. He never lost his balance, ate the grass and snacks we left in the feed bin. We stopped a couple of times and checked on him. This is what he looked like in the trailer: 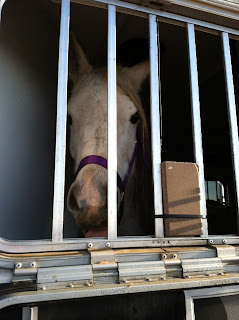 We stopped in Lamar and let him out of the trailer. He had been inside for four hours. He was happy to get out of the trailer and spent our lunch break grazing, looking around, and trying to eat our lunches. He was interested in everything going on around him. At one point he took me on a walk across the empty field to search behind the building. I walked him back and discovered he loves bread. He must have eaten six slices. In fact, all L had to do was wave a slice of bread at him and he walked right into the trailer to get it. Funniest thing, ever.

The rest of the trip was uneventful. Ashke liked the window open a little bit and the day was warm, so I rigged it that way. Ashke would stick his nose out of the window and snort then pull it back in. It was the funniest thing. JJ was watching him in the mirror and laughing. We made the trip home in 9 hours, much faster than we had expected.

Here are a few pictures of him unloaded in his new home: 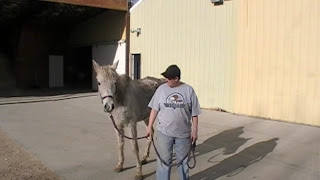 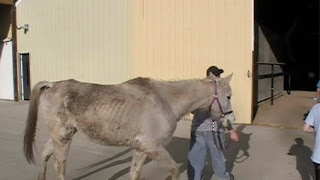 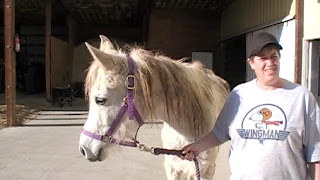