I can't believe Ashke has been here for only four days. It feels like it should be longer. We are settling into a routine and he is making progress.

On Sunday he was washed (without soap) and I discovered he absolutely didn't like his ears or his belly touched. It also took treats in the stall to encourage him to let me put the halter on him. That day has been documented in an earlier post.

On Monday the weather turned bad and by Monday night it was getting cold. We trooped out to the barn to put Ashke into his new blanket (69") after grooming him. I worked with his ears and brushed his belly and then slid the blanket onto his back. He was a little tense, but settled down once I rubbed his neck and talked to him a bit. He looks really good under the blanket, mostly because his neck doesn't look as bad as the rest of him. 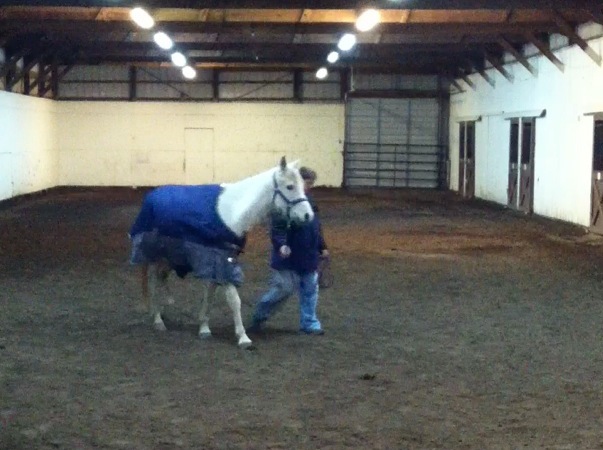 See? I know the blanket is super huge on him and I didn't have the underbelly straps correct, but he didn't seem to mind. He liked it so much, he even laid down in it to sleep.

This is one of my favorite pictures from that night. I love his face. 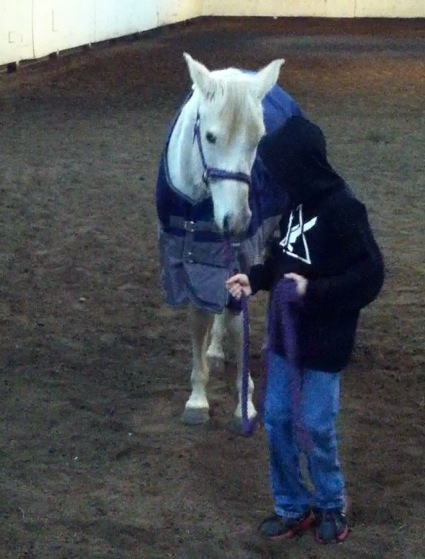 On Tuesday, I went to the barn by myself. It was sleeting and snowing and cold. T and J opted not to go, so I got to spend the time working on his belly and his ears. I also picked up and cleaned out both front feet, although he did get a bit touchy about his right fore foot. I bribed him with treats and picked it up a couple of times, until he stopped trying to pull it out of my hand. I was able to take off the blanket and put it back on without any issue. When I walked him down the barn isle the first time, he insisted we go outside so he could see what was going on. He snorted softly at the rain and snow and then was willing to go back inside.

On Wednesday (tonight) we all went back out. Ashke walked up to me in the stall and put his head in the halter. He was very interested in going outside with us. It was a beautiful night and T led Ashke around in a circle and let him eat some grass before we groomed him. There was no issue with playing with his ears and he especially loved my using the shedding blade on his rump. He backed up into the wall and rubbed as I was shedding out the back of his legs. It must really itch. He also leaned into me when I did the top of his neck and his face. He is still touchy about his stomach and he really doesn't like the brush or the shedding blade being used there, no matter how gently. I have gone over his belly with my bare hand and can't find a reason for his sensitivity, so we will continue to work on it every night. Tonight I had no issues with lifting and cleaning out all four hooves. We opted not to put the blanket back on him, since he was showing signs of sweating under it and tomorrow is supposed to be even warmer than today.

After grooming, we took him outside to the round pen and turned him loose. He had a blast. Ashke trotted up and down the fence, blew loudly at everything, flipped his head around, reared, kicked out, played chase with me, trotted and canter in a circle and generally played a bit. After about ten minutes I walked up to him and he let me put the halter on him with no issues. We walked back to his stall and he was definitely ready to finish his dinner. All in all, a great night. I am so pleased with his progress and I swear I can see him gaining weight every single day. He still has a long way to go, but I can see some progress.