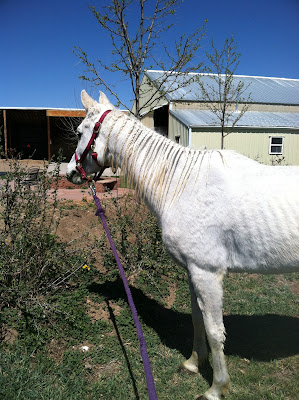 We went out last night too late to get pictures, so I thought I would share some of the pics we took on Sunday. Ashke is certainly settling into our routine. He understands that there are lots of treats involved in everything we do, although he is still being a bit balky when asked to walk some of the places on the farm. He is less interested in exploring if I am the one directing where we are going to go. I really think that dealing with this phase is a lot like dealing with a three-year old. I have to find ways to encourage him to do what I want, while not scaring him into it. On Sunday, I took the long lunge line and looped it over his haunches to encourage him to walk forward. I had to do the same thing again yesterday, since when I walk him out of the barn he stops and refuses to move forward. I really think he wants to walk in a circle and greet all of the horses in their pens at the end of the barn, when what I want him to do is walk with me to the arena. 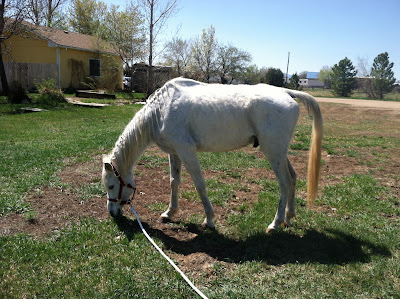 Last night we took him out of the stall and he walked right into the grooming stall where he can be crosstied. Of course, I think it helped that he knew he would be getting peppermint treats. J gave him treats while I groomed him. He is finally leaning into the brush when I get to the itchy spots and this time when I was grooming his belly, he pawed the floor with his right front leg. He let me lift and clean all four feet. His front feet really have me worried. They are very short in the heel. I am trying to find a farrier to come out, but haven't had any luck so far. 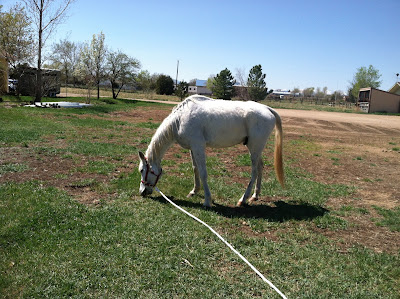 After finishing grooming him, we walked outside. He balked. I asked and he refused to move forward. I got the soft lunge line (its a soft, round cotton rope that's maybe 30' long) and made a figure eight around his neck and the back of his haunches. He really doesn't like the rope around his hind legs, but he didn't fuss as much as he did on Sunday (Sunday there was some kicking and humping his back and being offended and indignant). He walks out much quicker when the rope is around him. I am going to work with him this week with the rope and see if I can get him cued on the verbal commands. 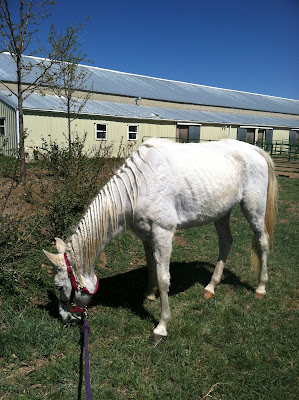 We walked him over to the large arena and turned him loose. He stood next to us and looked around. I took off around the arena and he shook his head, snorted and trotted with me. (Won't do that when the lead rope is on, but he'll do it when we are playing, go figure.) I did a circuit and then J did a second circuit and then I did a third (I am so sore today.) By the end of the third circuit, Ashke was warm and breathing heavier. I think his reserves are still very low and so we are taking it slow. The gentle exercise will help develop muscle and tone as he continues to gain weight, without stressing the joints or bones. His feet continue to bother me and the heels on both front feet are very worrisome. Unfortunately, no one is calling me back. I am going to try the farrier from the stable who is also a vet and see if I can get an appointment. After the arena work, we slipped the come-along back over him and walked over to the pasture. There was some very scarey vinyl fencing laying on the grass that we snorted at. We turned him out into the pasture and let him graze and explore for 20 minutes or so, and then took him back into the stall. It was very dark by then. At the end of our adventures, he willingly walked everywhere I asked without me having to put pressure on the line around his rump.  It was a good day.