Wow. it's been a long time since I posted and so much has happened that it might be a book to detail all of the things that have been going on . . . . that said, this is a story about Ashke.

We started working on flying changes in December of 2018 and Ashke has shown moments of brilliance, but less of consistency. His issue has been from the change from his right lead to the left. From left to right, he is flawless and it takes just a slight shift and bump on the rein to execute, but in the other direction, he can be half a step off behind. We had reached a point where he was getting it clean 90% of the time, but the consistency wasn't there. I worked on making the warm up work we did consistent to see if that helped and although it does help overall (a warm horse is more consistent than a cold horse - who knew?) it didn't fix the real underlying issue. I began to suspect there might be something else going on, since otherwise he is well balanced and we have worked on getting him equally strong on both sides.

We started with having the chiro come out. I felt like he was out in his SI area (chronic issue) which was the case, and also in his neck. He was better after that, but still kind of struggling. We brought in the vet and had his teeth done. They weren't horrible but there were a couple of points that needed to be addressed. It had been two years since his last teeth float, and as is usual with geldings, I had his sheath cleaned while he was drugged. He, of course, didn't drop and my vet, bless his soul, he had to go digging.

At the end of that adventure, my vet pulled three beans the size of my thumb out. Ashke must have known that he was trying to help, since Ashke didn't kick or thrash, but also didn't drop. The vet said to me, going forward, we need to do his teeth once a year, specifically so we could clean his sheath. That poor boy.

Guess what got 100% better? That's right, his change is now correct and balanced in both directions. Life is hard when you are a gelding. 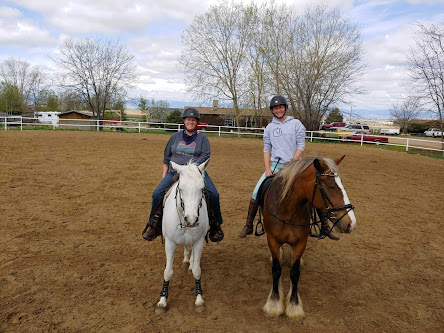 Mother's Day ride with Amanda on the Drum mare, Portia.