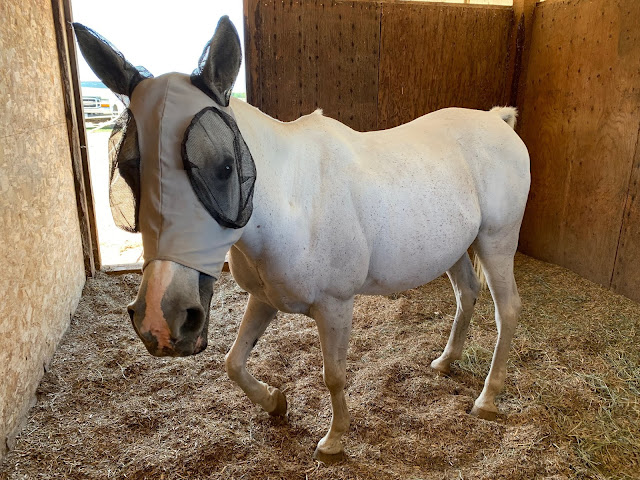 Awkward stall photos are the best.
New fly mask which he doesn't try to remove.
Come to find out, it was a vision issue and he can see in this one. 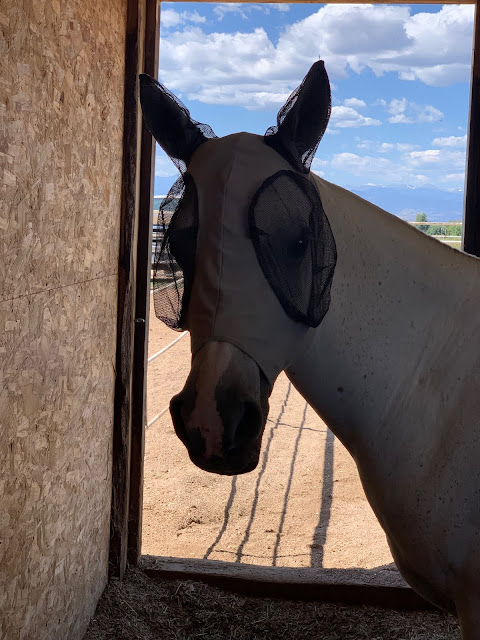 He even lowers his head so I can get it on. 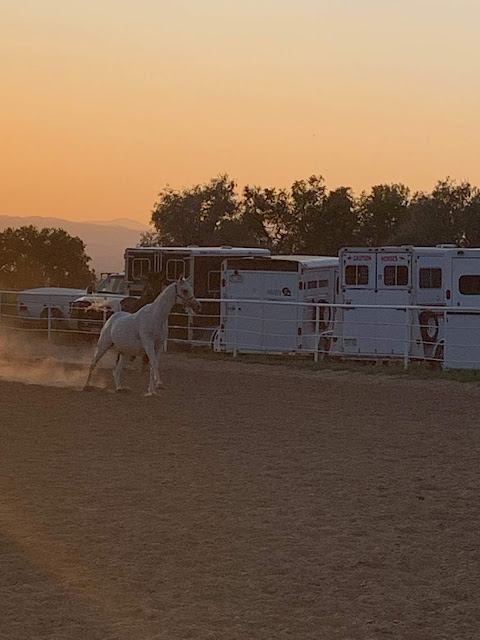 Some nights I don't have time to ride, so he gets to run. 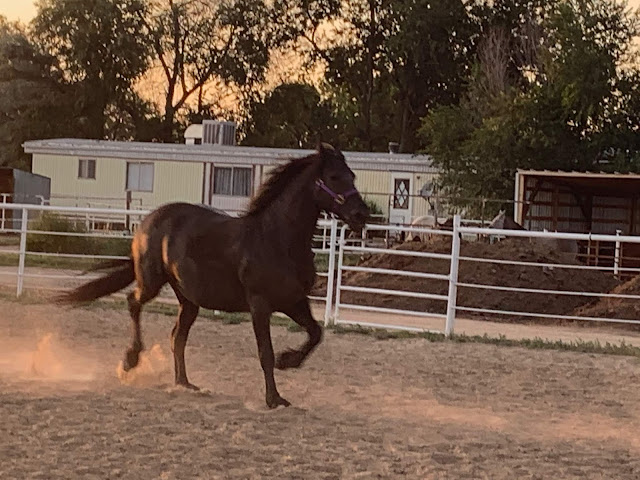 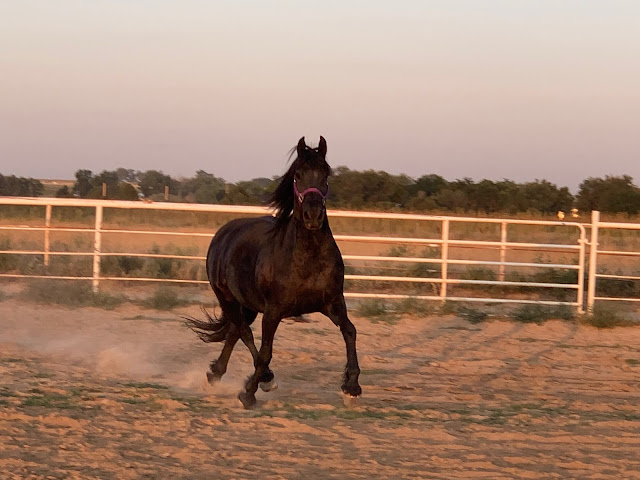 She is a pretty horse.
Ashke loves her. 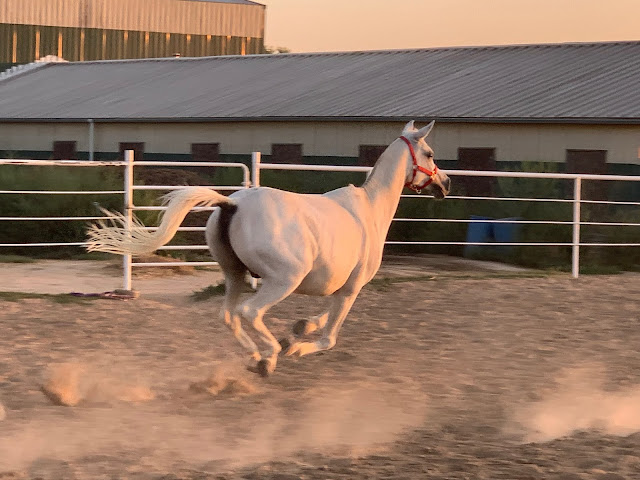 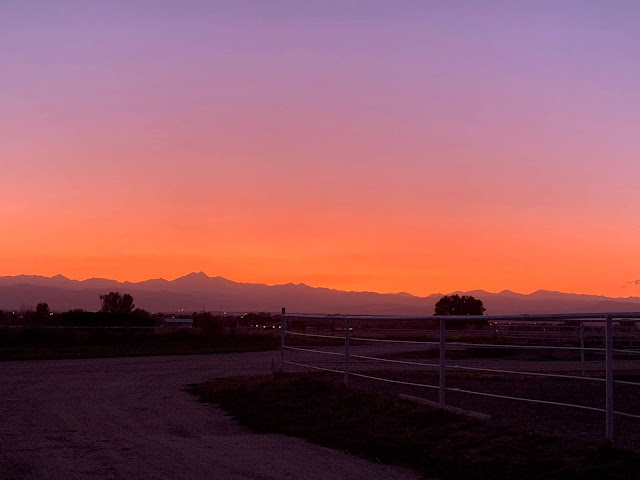 Posted by Cricket at 3:59 PM No comments:

On December 2, I did a clinic with a woman named Nicole Harrington. She was there to help the competitive dressage riders with various items and Amanda suggested I ride with her one time. I was struggling with cueing Ashke properly for our flying changes and we were really struggling. This was before I realized how much his hocks were impacting his ability to collect. At this point, I was just looking to be able to ask for the change and have him understand what I wanted.

Our very first clean changes
Since that break through, we have been working on our changes every ride. Even with my sporadic riding schedule of maybe three days a week, and sometimes it’s only my lesson day, he has still progressed. I am getting better at recognizing tension and stopping to reassure him that he is okay. That kind of helps reset his brain. Sometimes I tell him what I am wanting him to do, so that the picture in my mind is really clear. That also seems to help keep him from getting muddled.

Today, working on our half-pass to flying change work.
As you can see he has a harder time going from right to left, but I think that’s because I biomechanically sit harder on the left, due to an injury that damaged the muscle in my torso in 2006. It has been pretty obvious I sit harder to the left than to the right. I am working to improve that, but its still an issue. He is getting much better at listening and waiting for me to let him know when it is I want the change. We do transition work after the changes, because other wise he just gets more and more amped.
And here is some running video of him out with Kat a week ago, stretching their legs.
Posted by Cricket at 11:01 PM 3 comments:

So, I'm struggling to find the proper label for this post. It's hard because there are so many pieces floating around in the air, that nothing seems to fit. So, aftermath it is.

First, I have been asked when I will start blogging again, or if I ever will. My intention is to come back to this space, eventually, but it's hard to blog about your horse when you never see him. A friend of mine went through the sale and purchase, plus moving, of a house at the beginning of the year and she didn't ride for three months. That was with her horses on property (like could see them from her front door). I figure part of my lack of time is just the time suck this process takes. There is light at the end of the tunnel, however, since the condo is under contract (still waiting for the inspection results) right now.That means this should all be completely over by the end of September.

So, for some updates: 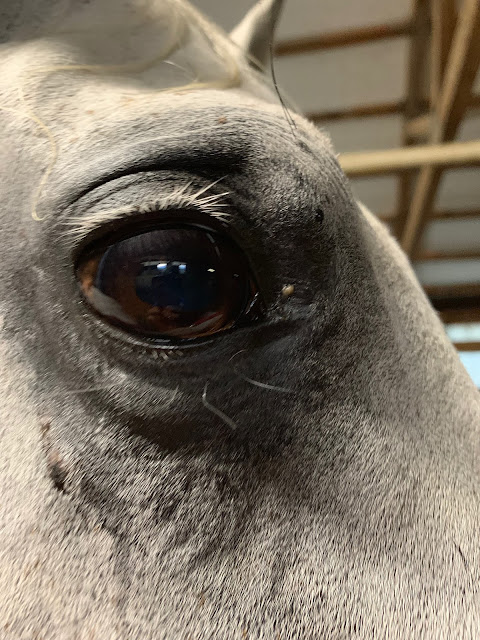 I have made some short term decisions about Ashke. He is going to continue in weekly lessons with Amanda, since we are making huge strides in our progress, but we are going to take a hiatus as far as showing in Working Equitation for at least a year. He can handle the dressage test just fine, but the tight turns required in the Ease of Handling test are too much for his left hind hock. He is currently getting injections when he indicates that he is in pain, and I have started him on daily previcox, which has really helped. Since we are needing both to keep him comfortable, it doesn't make sense to put him in a situation where he is required to really rock back on his hocks.

Instead, I might look at some Western Dressage next year. It's one or two dressage tests over one or two days, and the tests have very similar elements to the Intermediate level tests in WE. The other benefit is that I could go with the group of women from my barn as part of Amanda's student group, which means having more than one hand around to help with stuff.

Additionally, I want to get back out on trail, even if that means hauling out and riding by myself. I miss the long riding we used to do and want to get back to it. There are a lot of trails we can explore that were closed to us in the past because they were too difficult for a bike. I may not have the time before next spring, but being able to ride for long distances with elevation gains and loses will help strengthen his back and butt. And he loves being out and I love being with him.

We are currently working on bending off my legs at the trot, half-pass and leg yield at the canter, flying changes when I ask for them, rather than when he thinks he should (such an overachiever), although his anticipation the other night gave me the incentive to try a line of two tempis, which were not nearly as much fun at my request as the bouncing from one lead to another every couple of strides. I have started using my voice again, asking him to relax and wait. I had silenced my voice because we can't use our voice when we show, so I had stopped. But, we both prefer it when I talk to him.

I know he is missing me. Some weeks I have only made it out on my lesson day. On Monday night, as he followed me to the outdoor arena, he kept reaching forward and bumping me with his nose. 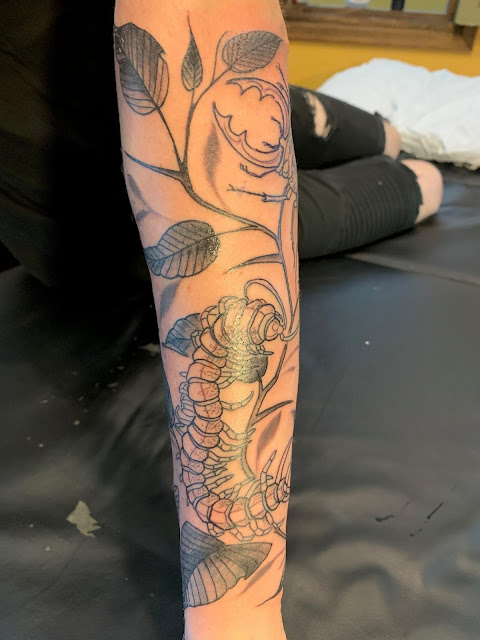 T has started his second sleeve. He wanted a thorn bush surrounding his rose, so they added bugs in the leaves of the thorns. Centipede for the win. It will have some red in it after his next session. 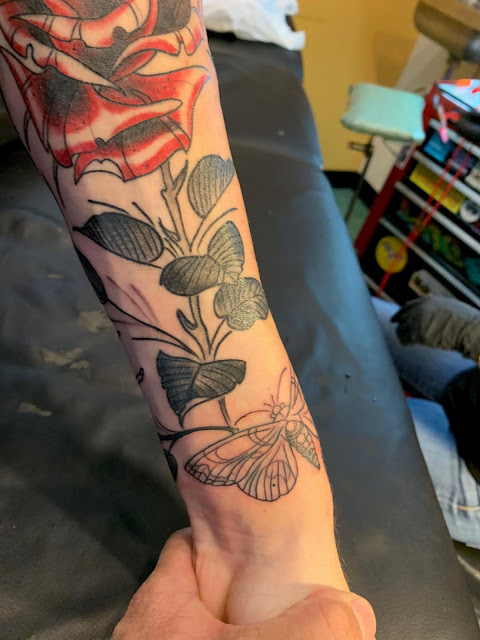 The rose was the first part of this tattoo. The moth was added at the bottom. It will also have a little bit of red in it. 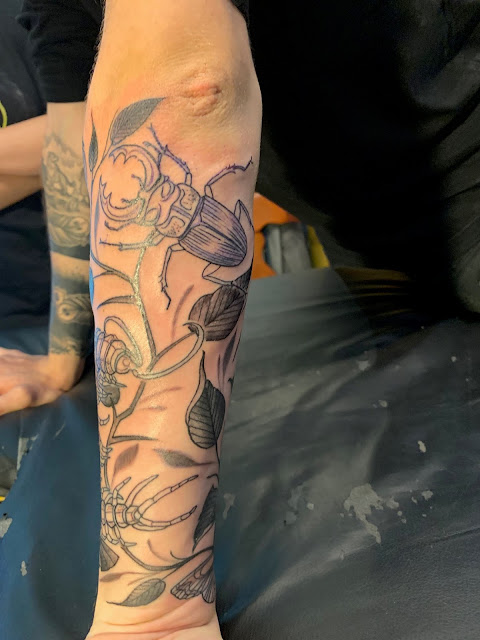 And final bug is a stag beetle. It will also have red in it. The top part of the sleeve with consist of thorn bushes with a cardinal on the inside of his upper arm (it will hurt a lot), and a stag in an opening in the bushes on the deltoid (upper outside arm). It will be at least two if not three more seesions. 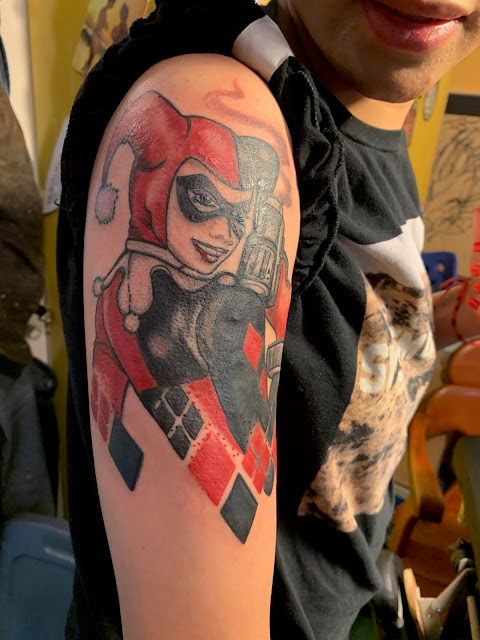 B's Harley Quinn tatttoo after her touch up.
I really wish I had a pic of the original, because the change was amazing.
I am thinking of having the tattoo on my left calf fixed. I have never liked the horse in that one, and Rachel said she could fix it.

In the meantime, I have a tattoo scheduled for 9/15. I will unveil it when it is done.
I am beyond excited about it. 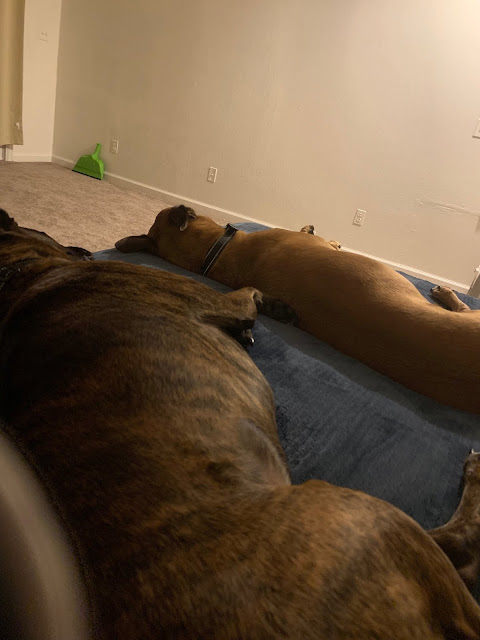 I have started reading again. I am reading on my kindle and the books that are holding my interest the most right now are apocalyptic novels. I think it is apropos to my current personal apocalypse. 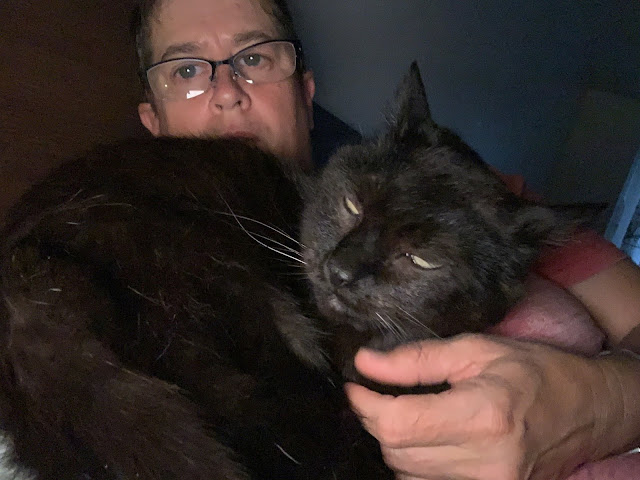 This wonderful little cat left my life today. She was taken to her new home unexpectedly.
We didn't get a change to say goodbye.
I will miss her so much. 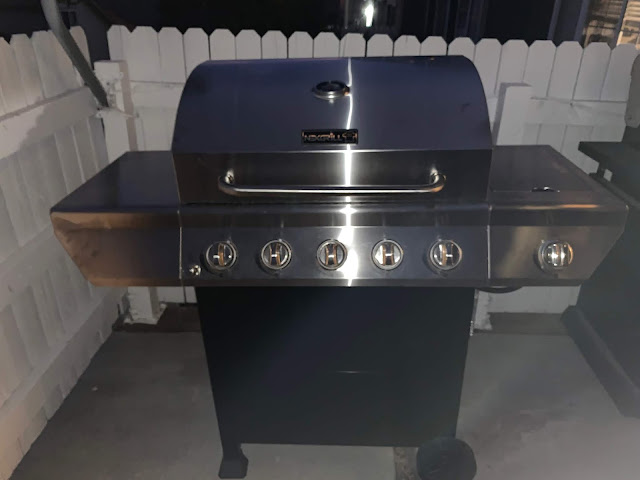 My new grill. It was just about $200 and works a treat.
I do need to learn how to cook peaches and pineapple on it, however. The meat I have down, but the fruit and veggies are another story. 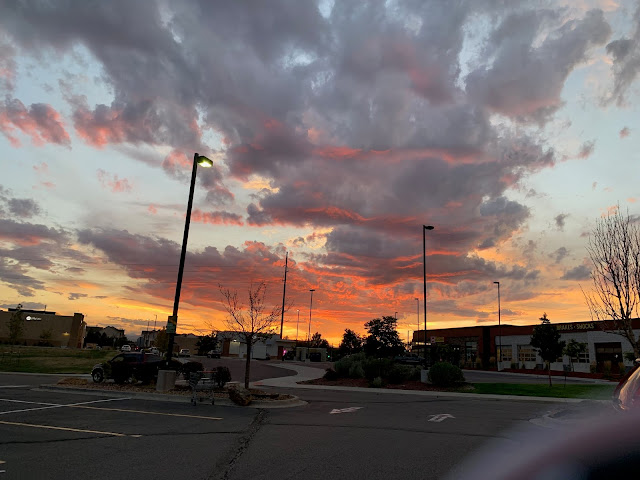 I think sunsets are the Universe's way of reminding us that beauty can be found after things end.
Sometimes hope is all that keeps us moving.