I was planning on riding again last night, but then I discovered the joy of owning a white horse. He had so much poo and pee all over both sides of him and although I tried to brush it out, it was still pretty gross. We decided to wash him and although it was almost dark, the temp was still almost 70.

J was wonderful enough  to fill the wash bucket from the sink with warm water so he didn't have to be completely washed in cold water. If we could have gotten him in the inside bath room he could have had a warm bath, but I don't think that was going to happen. I showed him the room and he wasn't real excited about it. Getting him up on the concrete pad at the outside wash area was a struggle in itself.

I had to resort to getting the lunge rope and doing the "come-along" to get him to step up. BECAUSE THE CONCRETE WAS WET! He didn't want to step up onto the water and even with the come-along he stopped and snorted before stepping up. Once he was up he was fine. And I'm happy to report that he has enough body fat that he didn't get cold. In fact his temp stayed pretty good and he came out white. 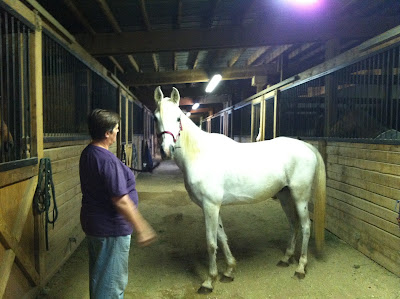 We wandered around the barn until he dried. He was being a pill. He threatened to kick at me when I was running my hands over him for which he got swatted on the shoulder. I could swear he giggled afterward. He also bit at me at least once and they jerked his head up like he knew he was going to be smacked. I laughed at him.

Here is the other side: 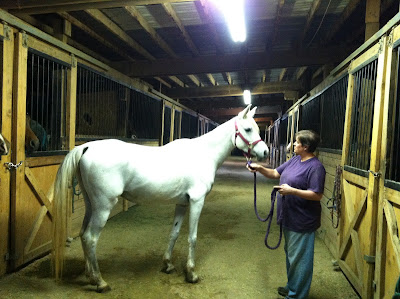 ﻿
He is getting muscle on the stiple and across his chest. The vet (who I'm beginning to believe is a real doof) talked like he shouldn't need to put on much more weight, but I disagree. He is still a three or so on the body condition chart and I want his butt, shoulder and back to fill out more. J thinks she can see wrinkles in the skin where he can still fill out.

I hope he doesn't get too dirty today.
Posted by Cricket at 10:54 AM