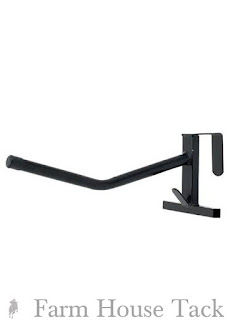 Have you seen one of these?

Saturday, I had Ashke tied in the same spot he is usually tied in, while I groomed and got him ready to ride. One of my friend's had her Friesian in the crossties half way down the row, and we were chatting as we got ready to ride. There was a portable saddle rack hooked over the rail next to where Ashke was tied, but it was turned away from him, with the pokie part facing into the feed stall. I went into get my saddle and heard my friend yelling whoa. I came around the corner and saw Ashke on his hind feet, pulling back, with the portable saddle rack attached to his face.

He must have lowered his head and hooked the back hook onto the side of his halter.

I dropped the saddle and said, "Ashke, whoa. Stand."

He dropped down, and although he was trying to stare threateningly at the object attached to his cheek, he stood. I calmly, but quickly, walked out and put my hand on his shoulder, using my other hand to steady the rack until I could get it unhooked. He was shaking and snorting, but trusted me to take care of it. I put it out of harms way and then spent a little bit of time running my hands over his neck and back, telling him how proud I was that he listened and waited for me to save him. I told him over and over what a good boy he was, while I waited for the adrenaline shakes to stop.

Then both he and the Friesian (who was alarmed by not overwhelmed by Ashke's reaction) got peppermints for being great horses.

Teach your horse the command "stand". That is like the fourth time it has saved either me or Ashke from a trainwreck. And be careful with those saddle racks. I had no idea he could do that to himself with one.
Posted by Cricket at 2:53 PM 3 comments:

Ashke seems to have gotten past whatever might have been causing pain in his left hock. I’m beginning to believe it was caused by a game of kick-me, kick-you with the gelding in the run next to him, since I caught them kicking at each other when I drove up the other day. For now, I’m pretty happy with how he is moving.

Saturday, a friend’s daughter came out and learned a little bit about horses. She learned how to hold a lead rope correctly (no loops), how to groom and pick out feet, watched the saddling process and held Ashke while I went to the bathroom. I rode him and then she untacked him, brushed him down and took him over for what is likely his last bath of the year.


This was at the end of our Saturday ride.
He is working on keeping himself straight when we do a line of changes.
It is definitely getting better every ride. 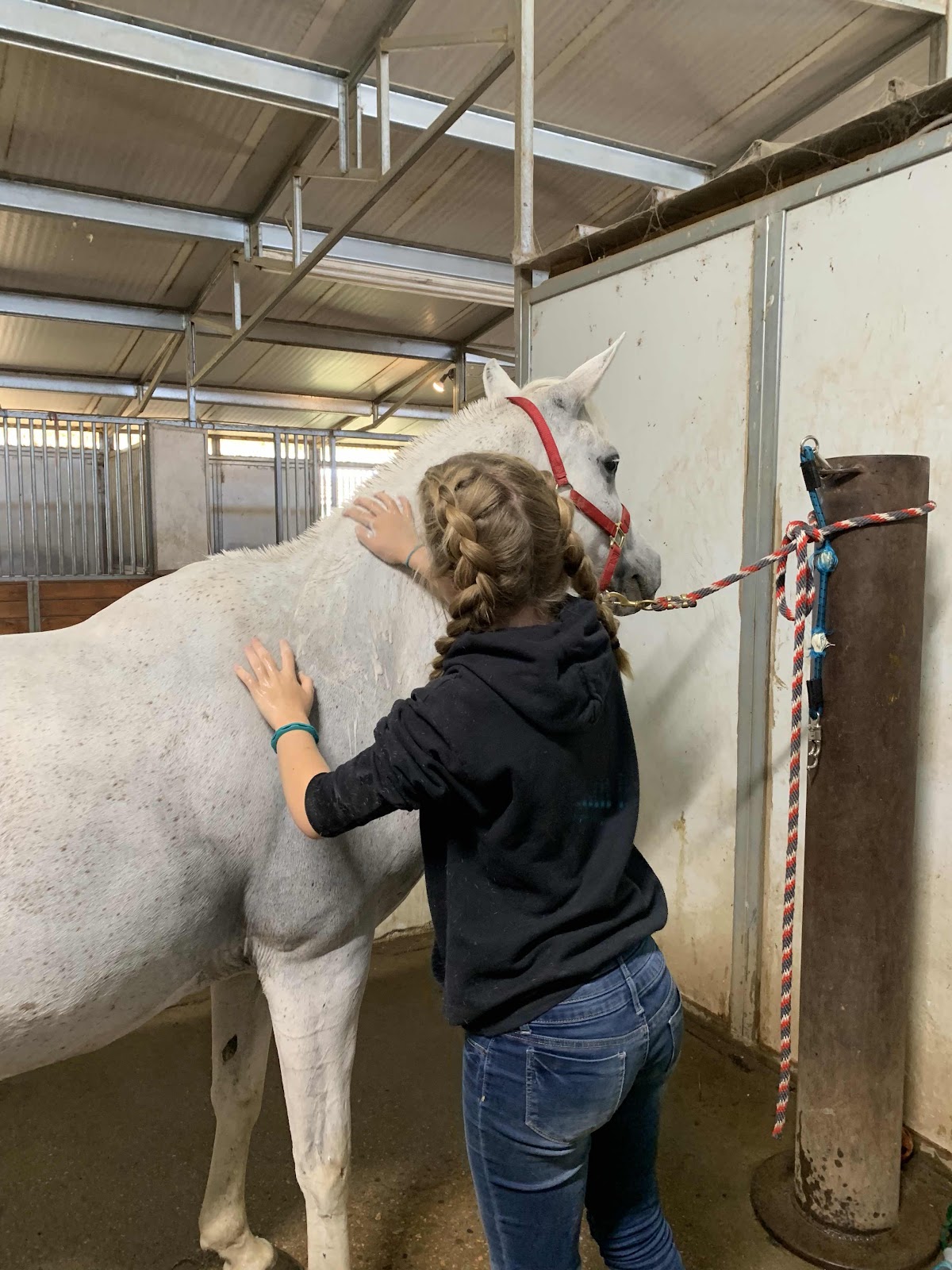 Don’t we all want our own 13 year old horse crazy girl groom? 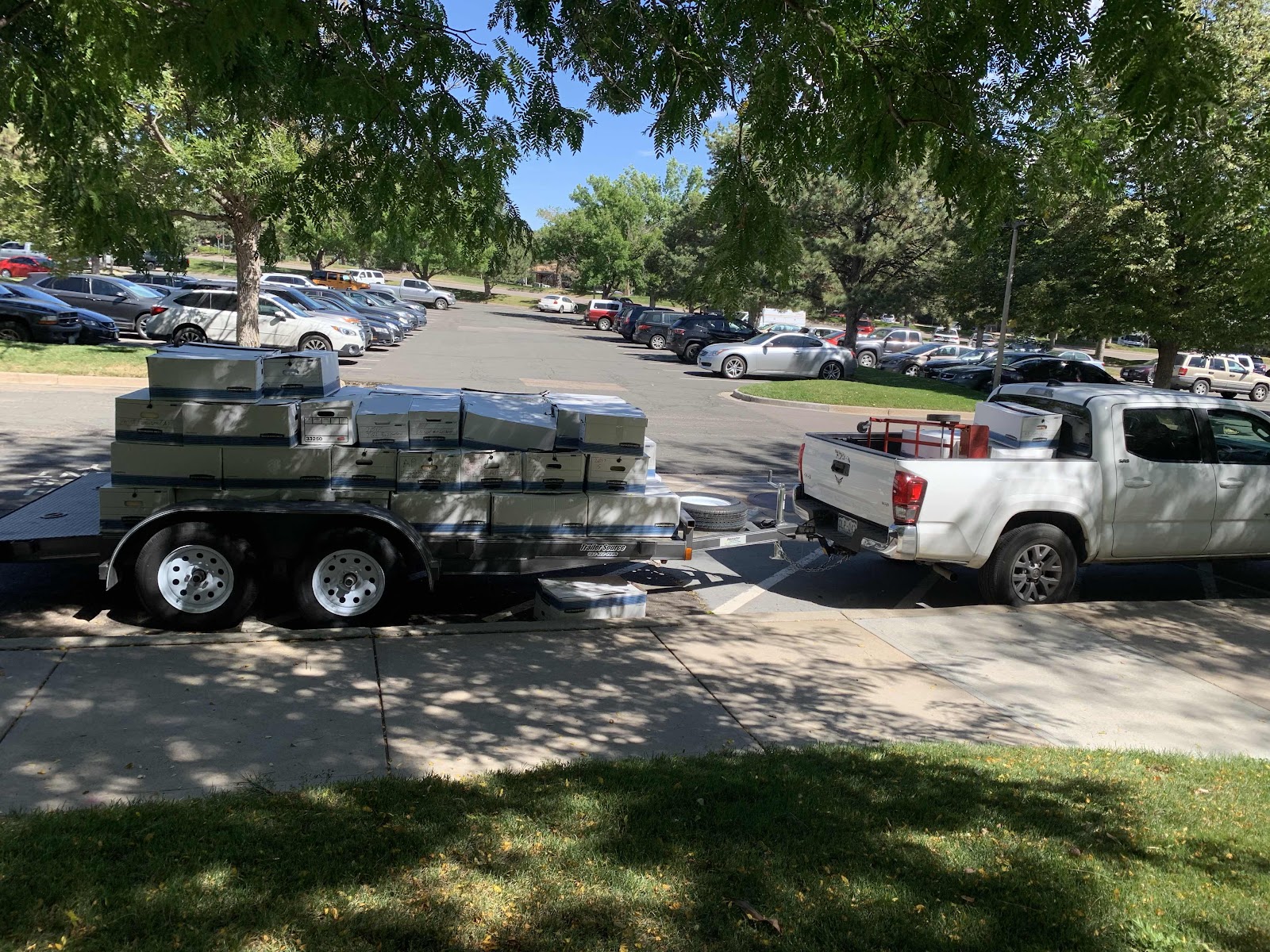 What I did at work on Friday.
There were more than a 100 legal sized Banker Boxes on that trailer. T and I moved them from the office to the storage unit across the highway. Marvel handled it like a champ and none of the boxes fell off. 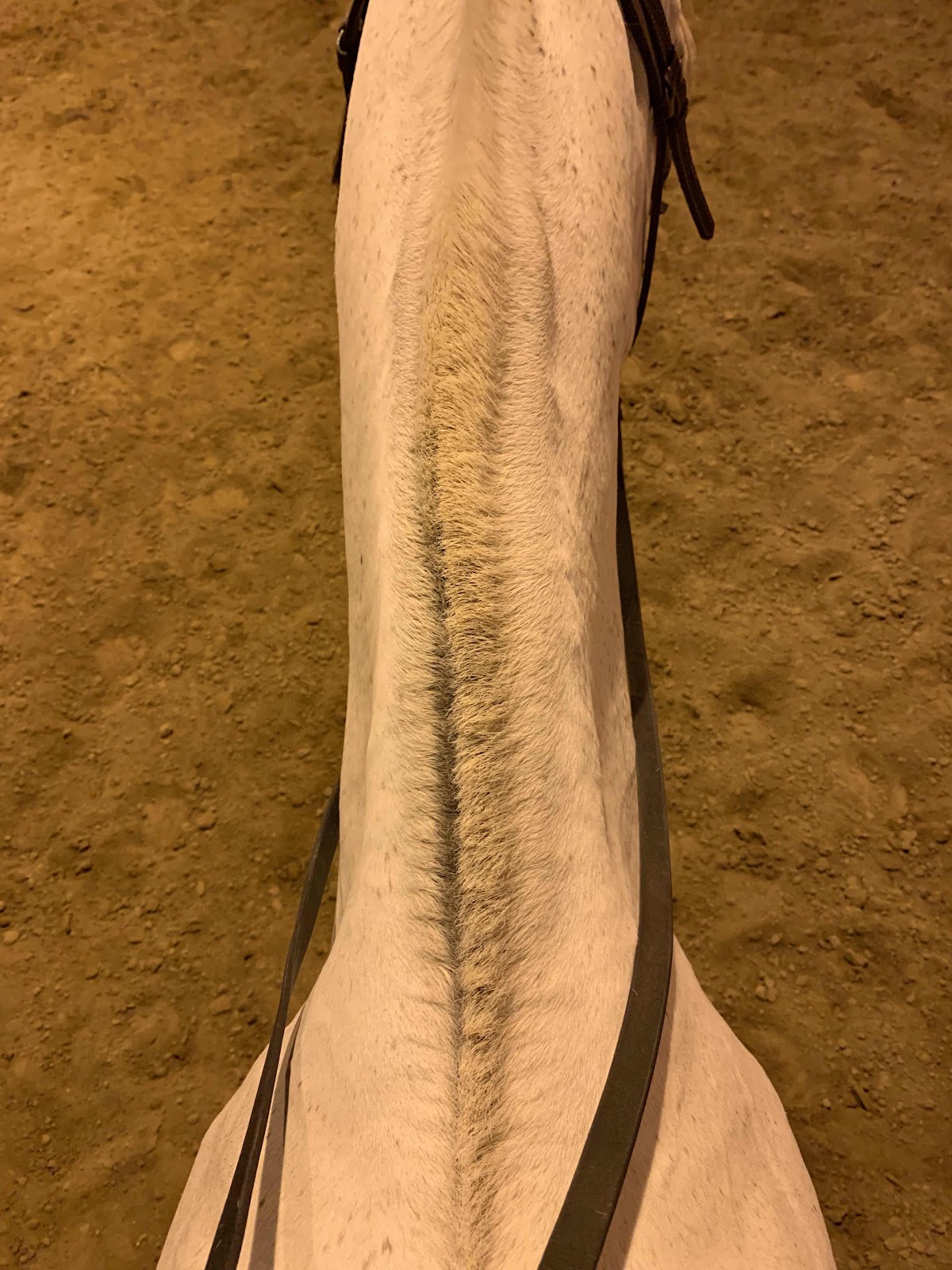 I wanted to share a pic of how Ashke’s neck muscle is looking. It used to be that it tipped to the left, but now it remains pretty straight in front of me. I am going to let his mane grow out and see what size it tips to. 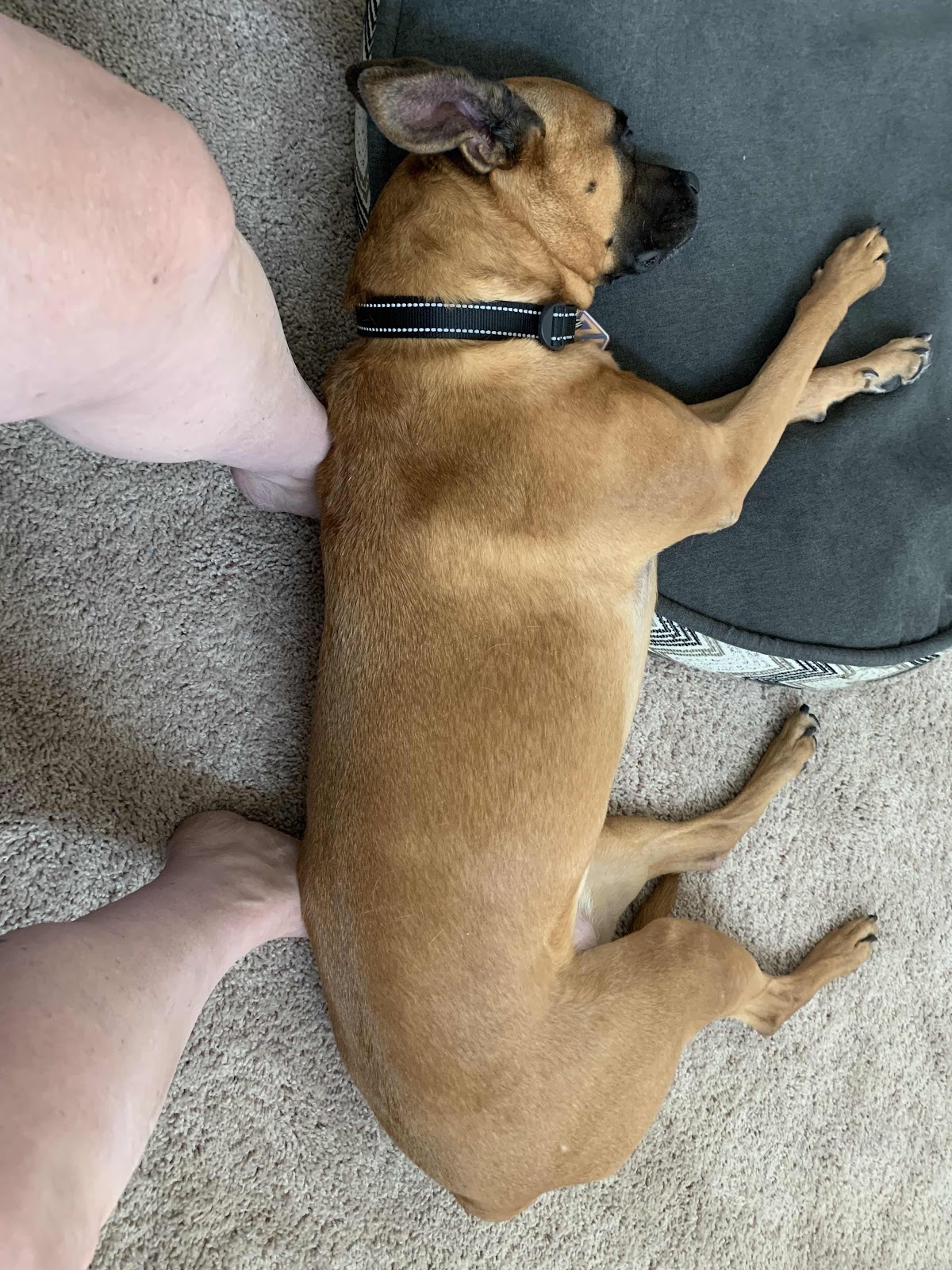 Lily laying on my feet. One of her favorite places to lay. 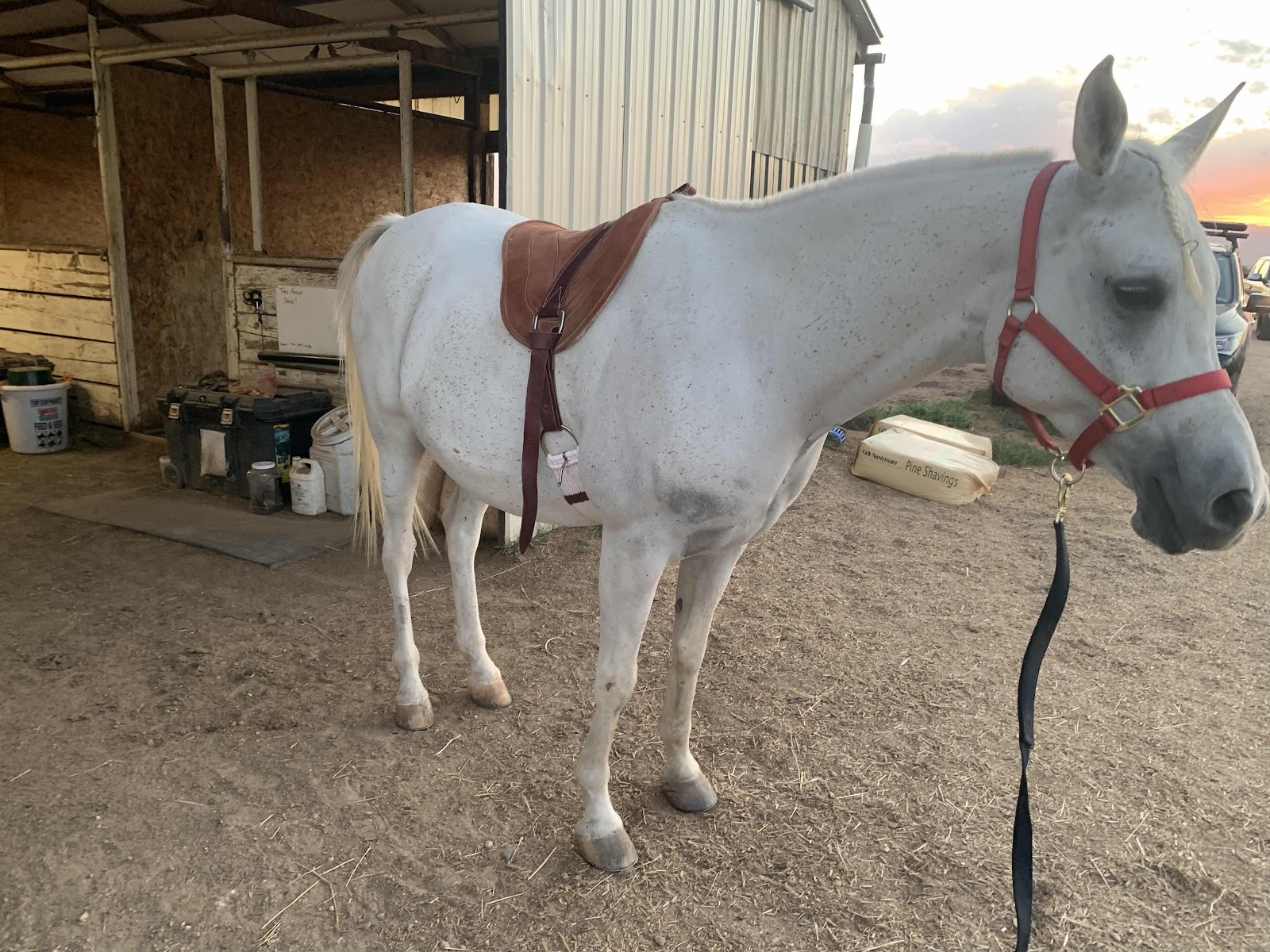 Ashke being wild poneh over small leather bareback pad
My friend Chris lent me her Parelli bareback pad (anyone with one of those for sale, please let me know - I am in the market for one). It attached with one of my western cinches, and although Ashke was a fire-breathing dragon when I first put it on him, his skepticism was fairly short lived. I didn’t want to ride him without Amanda’s help to start, so I took him outside and lunged for the first time in probably three years.
As you can see he is wary, wary scardt of the pad.
I got him back inside, bridle on, and layered his halter over the top with the lunge line attached. I wanted to make sure he wasn’t going to be throwing any shenanigans our first time out. It wasn’t that I didn’t trust him, but rather, didn’t know if I could trust my body to respond correctly to his movement. Being older sucks.
Amanda did ask me if I wanted to ride a bit to tire him out before I got on.
I told her I was pretty comfortable with her on the other end of the line.
I figured I would know pretty quick if I was going to be able to ride him this way.
We did a brief canter in each direction while still on the lunge line and he was amazeballs.
At that point, the lesson became a normal lesson.
We worked on all of the stuff that we normally work on until my legs and core felt like spaghetti.

We even got a couple of changes, which can not be ridden one handed while holding on.
Ashke was like WTF, mom?!
So, a couple of things: Ashke was foot perfect and absolutely wonderful. There was not a moment in our ride where he thought about being anything other than the gentleman and full partner he is. Second, he is always a little looky in the arena. There is a ton of stuff laying around that gets moved on a regular basis. Last night, although he peeked at those objects, his body did not fill with tension. He remained relaxed between my legs. Third, his braces through the base of his neck and Amanda reminds me during our lessons to ask for relaxation and to not brace. That was not an issue last night. He was relaxed and soft in the base of his neck and his poll. His contact was solid, but not leaning, and he was fully present and available to me. Finally, other than a small bobble on a canter circle early on, I had no issues with riding him bareback. I can feel the difference in my core and lower back muscles today, but they are a soreness, not a pain, so I am sure I was using them more fully than I have in the past. My balance was perfect and except for allowing my fear to win the battle at the beginning of our first change, I had no issue riding any of the things. I did have to lift and move myself back into position after our trot lengthening, but I was able to do that with just my legs.
I can’t wait to continue to ride bareback this winter. It will be a great option when it is cold.