Something to Think About

We ended up at the barn pretty early this morning, because we have plans this evening. Before we got to the barn, however, we went to two different feed places before we found the Amplify. We found a fifty pound bag at Lafayette feed and two 20 lb bags of treats (one in apple, the other in peppermint) from Willow Run Feed in Broomfield. Boy, was the horse happy at the peppermint treats. 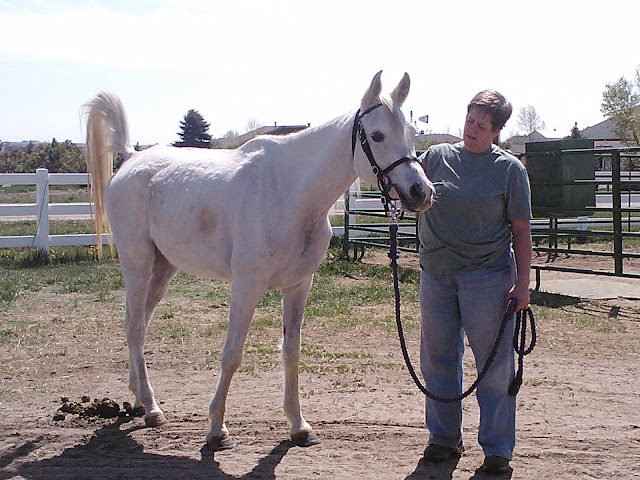 So, because of the events of the past couple of days, I decided to give Ashke something to think about. We introduced him to the bridle. We are going to need to continue working with his ears, because there is a difference between touching them and putting them in a bridle headstall. As we discovered today. We also discovered that crosstieing him in the grooming stall with the halter around his neck really doesn't work. Freak out! 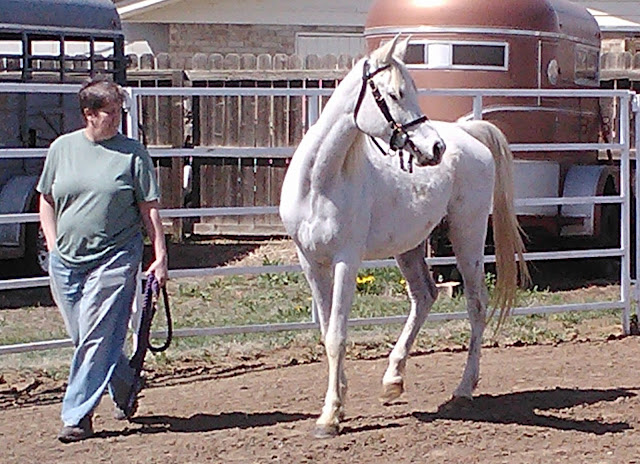 The bit I am using is an eggbutt snaffle made of sweet iron with copper bars inlaid on the bottom of the bit. He mouthed it a lot. Kept trying to bite it. Having the bit in his mouth made everything at the barn scarey and he walked around snorting and looking like everything was brand new. 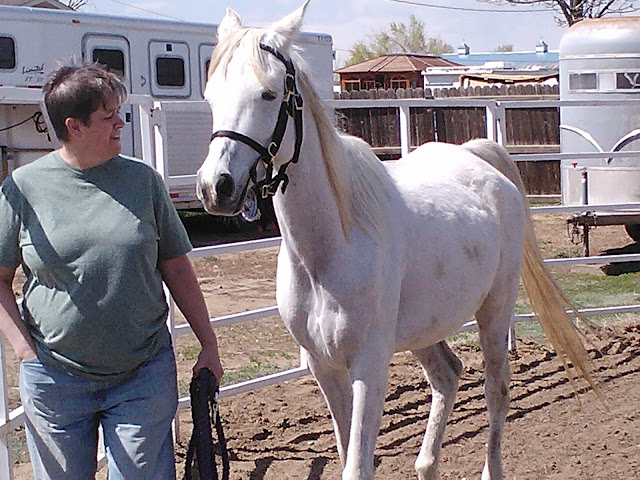 He is pretty funny, since I can unhook the halter and he follows me around the round pen like a puppy. He is always very polite and never crowds me. Don't you love that he is getting some meat on his chest? 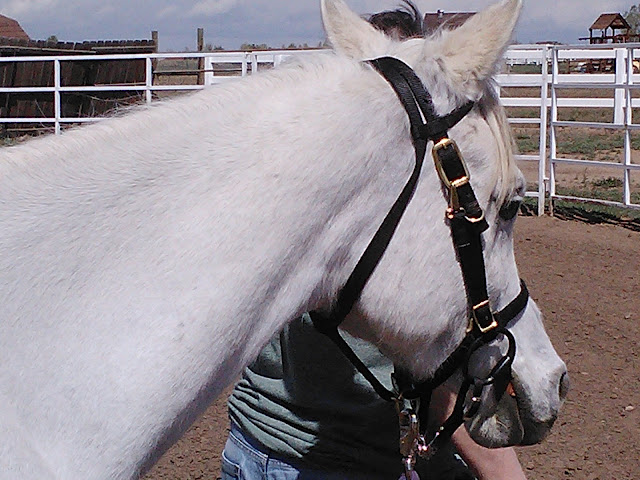 I want to point out that the bridle I am using is too big for my boy's little, bitty head. It is a halter/bridle combination and the bit snaps off. This is helpful when first bridling him, since I don't have to get the bit in the mouth at the same time the headstall is going over his ears. Unfortunately, the snaps are supposed to clip onto the brass rings and instead I had to clip them onto the buckles on the side. It bit fits good that way, but I'm not crazy about the way the headband is fitting around his ears. I may need to get something different further down the line. 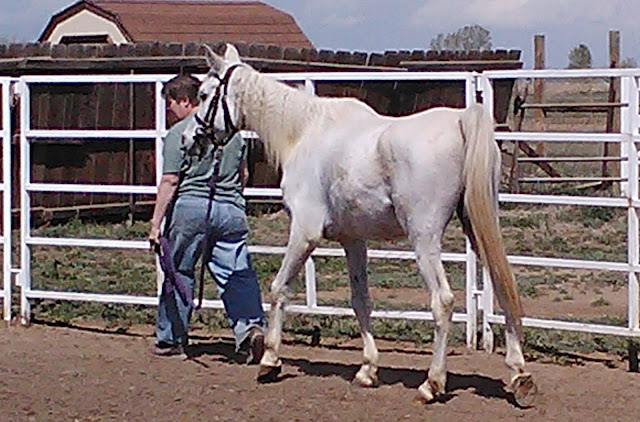 I really think he prefers to be outside in the sunshine. Unfortunately for all of us, it is supposed to snow tonight. 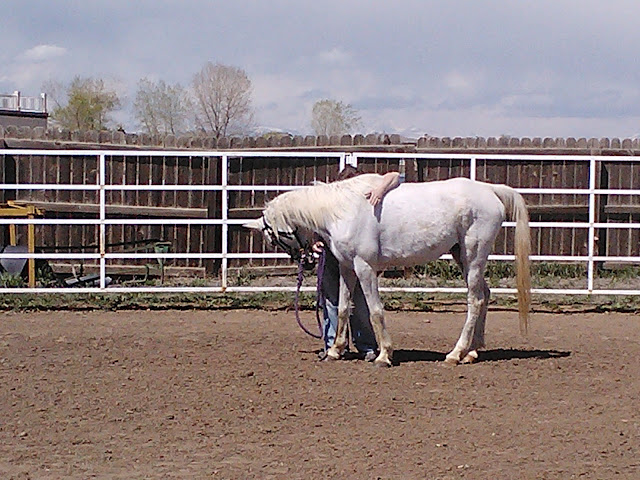 I leaned on his shoulder a few times, putting pressure on his back and letting him hold my weight. He's not crazy about it, because he really doesn't understand why I am doing it. And he has to fight his natural reaction that tells him anything on his back is dangerous. He relaxed as I talked to him. 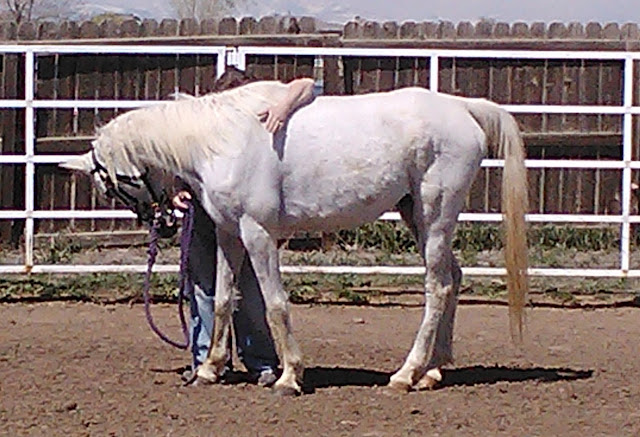 I am trying to get him to understand that no matter what happens I am not going to hurt him. We are still building our trust. We also told him that he is ours and we aren't going to get rid of him. All of those items seemed to help him settle today. And of course, the bit gave him something else to think about. 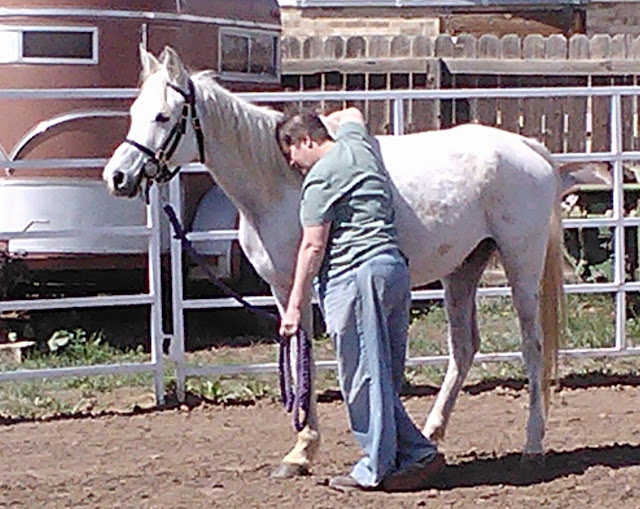 We did several loops and then he was done. We are going to continue with the bridle for a few more days, then I will start saddling him. 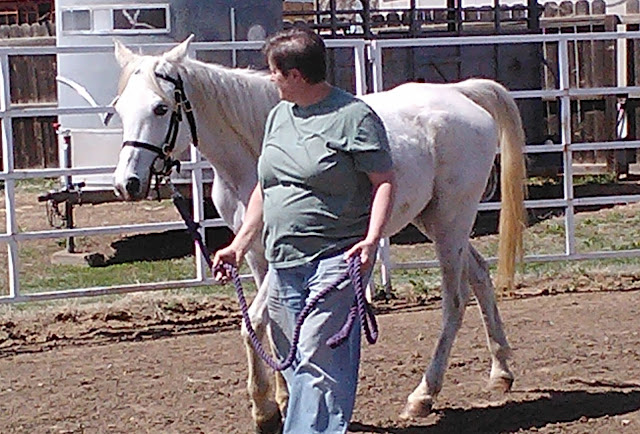 We also got some video:

Here he is trying to figure out the bit:

Me working with his back and pressure. I work from both sides so he is comfortable with being worked from either side:


Here he is off the lead rope and following me: