I started riding at the age of four and from that time horses were more important to me than breathing. We lived in southern Idaho and I roamed the county from the back of a horse from the age of eight on. From the time I was 10 until I was 24 I bragged I could ride anything with four legs and a mane. And I rode everything that I was given the opportunity to ride. I moved to LA at the age of 24 and was forced to give up horse ownership. Even in LA I found a way to keep my hand in . . . worked with a few Arabians, took an equestrian class at the college I attended, and rented a ride a couple of times. I moved from LA to Colorado and almost immediately got back into horses.

I was pretty lucky to meet a couple of people who wanted someone to ride their horses. I got to ride the granddaughter of Secretariat and a pretty nice little Appaloosa mare. Even before I purchased the Insane One, I was riding pretty much every weekend. After the Insane One, however, I wasn't in a relationship or a financial situation to have a horse, nor did I have the time. I pretty much stopped riding completely in 1993. I had a son and all the responsibilities that entails.

Looking back over my life, I took a lot of spills off my horse. Seabisquit was a horse I baled off of more times than I can number in the four years of riding him. I broke my left hand. I got tossed into a wooden fence. I got knocked off being ran under apple trees. I deliberately jumped off. A lot. I had Queenie fall with me. I had Ace fall with me. I rode broncs in the Little Britches rodeo, and steers, and even a sheep or two. I can't number the times I was thrown in my teens. I injured my lower back, my SI joint and my right foot. Stitches in my face on three different occasions. Pain was part and parcel of riding.

In 2006, my family and I drove to spend a week with my parents over July 4th. We went to Island Park, along the Snake River, just outside of Yellowstone. One of the things my mom suggested was a trail ride along the river. There was a ride place that would allow T to ride his own horse. It sounded like a lot of fun. We went to the barn and got signed up. T was put on a small appaloosa gelding (very safe choice) and I was put on a huge, rawboned gelding. J, my niece and my sister went with us. We were riding in western saddles. I had my brand new DSLR camera and telephoto lens in my right hand and was taking pictures of everything. 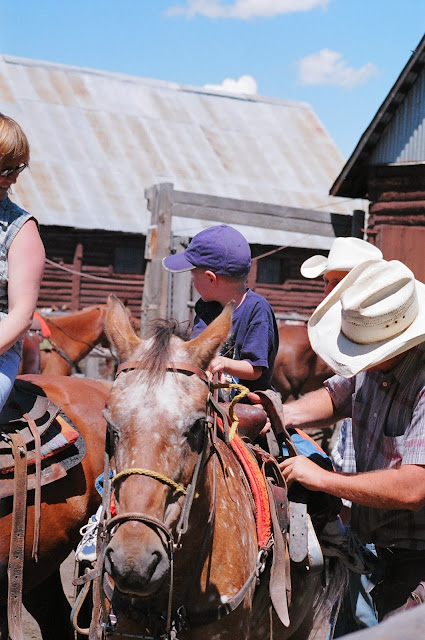 First time on a horse. 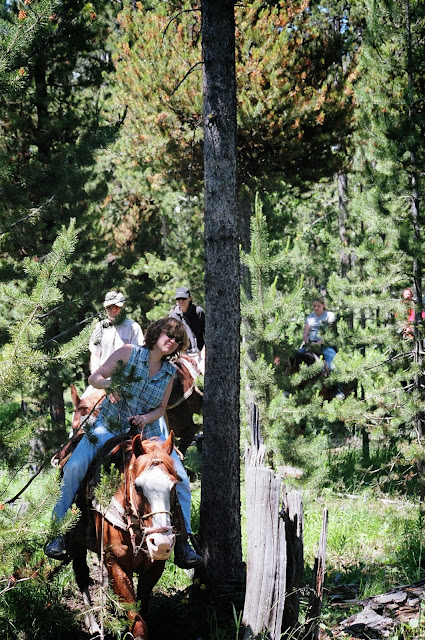 My sister in front and J a couple of horses back. 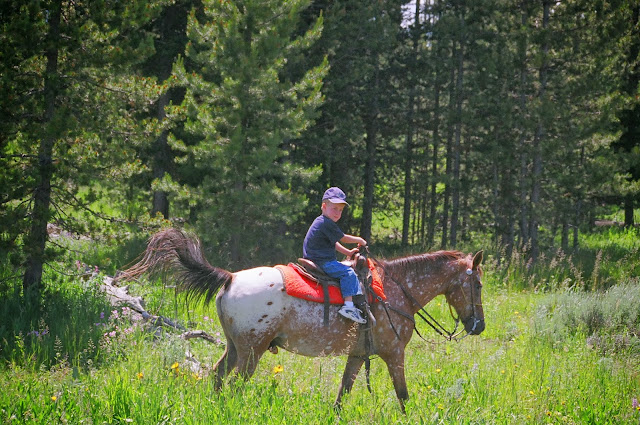 Doesn't he look at home? 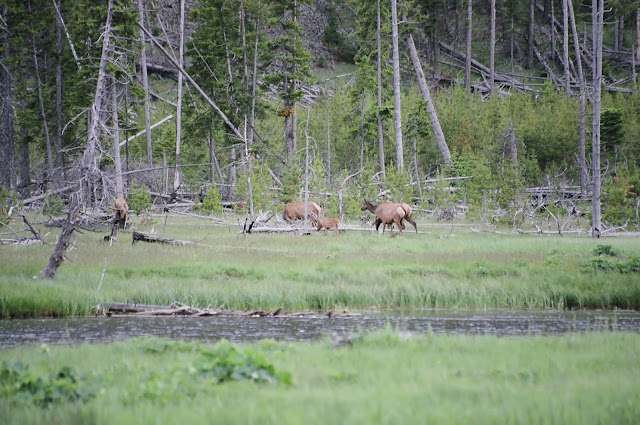 Elk along the river

About five minutes after I took that last pic and 30 minutes after leaving the barn, I slipped my feet out of my stirrups (I hate western saddles) and straightened out my legs. My knees were cramping and I needed to stretch them out. As soon as my heels flashed past the point of my horse's shoulders, he ducked his head and crowhopped. (I'm pretty convinced he had been used as a bucking horse at some point in his life). I had a moment of clarity where I knew I could drop the camera (and my brand new $300 lens) or I could save the camera and let the horse throw me. I opted to let the horse throw me. (mistake #1) I landed on my butt. I also held onto the reins (mistake #2) and I completely forgot I had a lumbar camera pack strapped around my waist. (mistake #3) The horse hit the end of the reins and jerked me back over the lumbar pack. This caused some of the muscles on the left side of my torso to tear loose from my hip and ball up under my ribs. It also bruised my kidneys (I had bloody pee for three days) and my spleen. It also ruptured the disc at my L5 vertebre. The idiot cowhand from the barn jumped off his horse and began manipulating my ankles. He didn't listen when I told him what really hurt was my back. He ignored me. I was in more pain than I had ever known. I looked up and saw my son sitting on the back of his horse. The last thing I wanted was to ruin his first horseback ride so I smiled at him, climbed to my feet and got back on the horse.

J took the camera bag (which is why there were no more pictures) and I clung in dumb misery for the next two hours. My niece kept T entertained by slowing her horse down to open a gap between her horse and the group, then trotting forward until she caught up. T did the same and I was so happy to see how much he was enjoying himself. By the time we made it back to the barn, I was grasping the saddle horn in both hands, trying to minimize the amount of movement I was experiencing. I swung off the horse and collapsed, holding myself up by clinging to the saddle. One of the cowboys kind of dragged me to the corral fence, where I held myself up on the wooden slats until J could come and help me to the car. I had no insurance and didn't want to destroy our financial stability by going to the hospital so I went to my mom's house. My entire back was black and blue. She had some painkillers left over from a root canal and between them and ice, I managed to survive. I had shooting pain down my left leg in the morning and my lower back hurt a lot.

Eight months later, stepping over a child's gate in the doorway of my son's room, the disc slipped and I was breathless with pain. It went on for months. The chiropractor I went to for help told me I should never ride again and that any exercise at all would cause me to have to have surgery. I started my office job the same month I ruptured the disc, which started my downhill struggle with my weight. For three years I was in pain. Afraid of the pain. Afraid to do anything. And I gained 45 lbs. During that time period, I told J I would never ride again. At that point all I could see was how much pain horses had brought into my life. It seemed like the times I was hurt the most in my life were from riding. Or handling horses. Or being tossed off of them.

J told me later (after Ashke) that my telling her I wanted nothing to do with horses ever again, made her really sad. She could tell from my stories how much they meant to me.

In 2011, L and I started talking horses. She invited me out to where she kept her horse to ride with her. One of my biggest worries (and honestly, what was holding me back) was the thought that riding was going to make the disc injury worse. I had no idea if I could ride. Or if I could swing up on a horse. We spent a couple of hours riding and I discovered that 1) I didn't fall off, 2) it didn't hurt any more than anything else does. I asked J if we could see about me getting a horse once the credit cards were paid off. She said sure. (Honestly, I don't know why she puts up with me.) I started surfing the web, trying to educate myself on Arabian horses, because I had this insane idea that I wanted to ride in the Tevis Cup. (HA!) J started looking for a new vehicle, because she wanted to be able to pull a horse trailer when it was needed. My plan was to get a horse in October of 2012.

I started talking with a BM of an Arabian breeding farm in Oregon about a horse named Durango that I liked. On December 17th, I was on FB looking at pictures of horses when the BM emailed me and offered me Durango for $1000 and a ride to bring him to Colorado. I burst into tears. There was no way I could get a horse that soon. I thanked her and got off line before I changed my mind. That night at our work holiday party, one of the managers I worked with offered me Ashke. For free. J agreed and four months later we brought my boy home.

I still struggle with pain, but it's now pain on my own terms. I feel so much better with regular exercise and the BOT back support helps a lot. Also, my mental state has altered. I no longer fear that riding will make my injury worse. I can feel my core getting stronger. I can feel myself getting better.