So, when we moved from Owen's we had two barns that we really looked at. One was a big facility, just having gone under new management, with two big outdoor arenas and a huge indoor. The stalling option was a run with a shed or inside in a box stall. That barn was big, with lots of horses and riders, very often busy with five trainers. The huge drawback was we were told that Amanda wouldn't be able to train us until one or two of the other trainers left. And there were only five spaces available. The second barn gave us the opportunity to have all of the horses in one barn, with a huge tack room, stalls with runs, two outdoor arenas and an indoor arena. We opted for the second barn, with the exception of the woman I was sharing lessons with (the other barn is within walking distance of her house) and Amanda decided to put Laz, her Grand Prix horse, at the other barn. We moved in the 18th of October.

Our first time in the indoor in our new barn, Amanda walked us over to show us this: 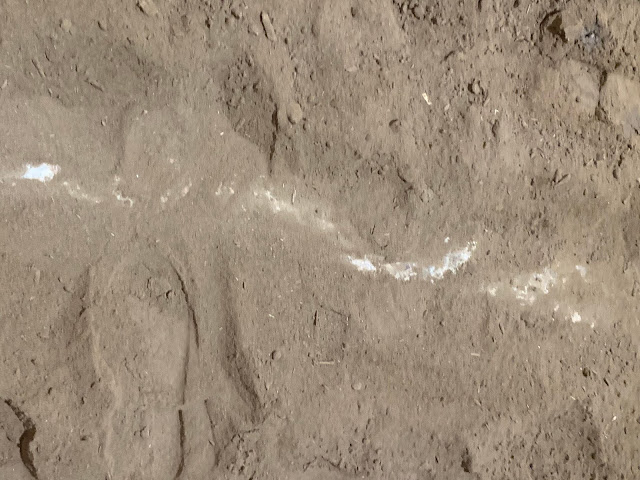 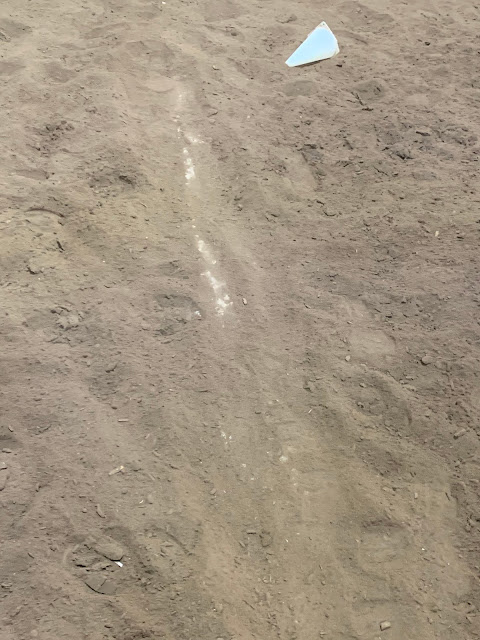 And about an inch down.
Our best bet is it is a footing for a building that used to be here and when the arena was built, they covered over it rather than digging it up. Amanda found it while lunging a horse that tripped and fell over it. It starts about two feet off the rail and runs almost to center line at about the K marker on a dressage court. Makes for some interesting mental notes while riding.
Additionally, the arena is not level at all. There are some spots that are high and hard, mixed with deep pockets of sand that kind of fall away under your horse's hooves. Plus, they neither water or drag it on a regular basis, which at least gives you an idea of where the holes are in the footing. Add in the five minute walk from our barn to any of the arenas (literally five minutes of meandering around buildings and cars and trees and bushes to get to the indoor) in the dark and I was beginning to regret my life choices.
November 1st, a Sunday, enroute to the barn, the owner called to tell me Ashke had hurt himself and probably needed to see a vet. 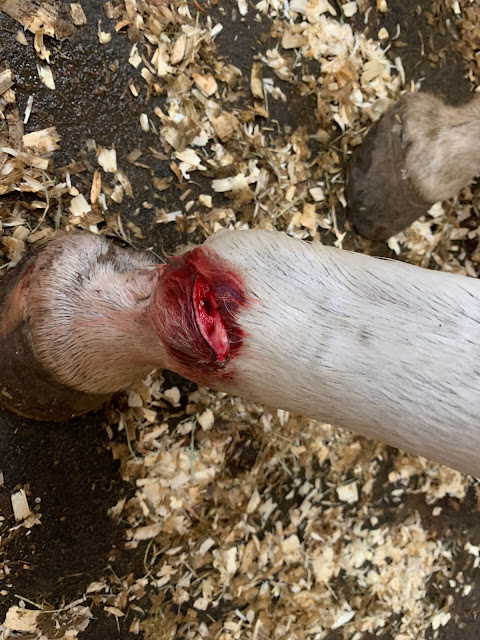 Sorry for the lousy angle on the pic. I was pretty distraught.
He sliced himself pretty good on the bottom of the moving door between stall and run. 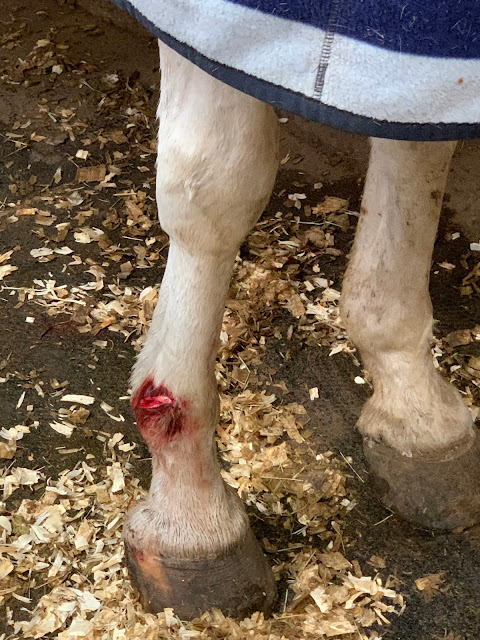 I got it cleaned up and called the vet.
Dr S put eleven stitches in (five inside and six on the outside), told me the collateral ligament had been cut, and he thought the joint capsule had been injured. He cleaned it, stitched it, shot Ashke full of drugs to stave off a joint infection and suggested I pray. 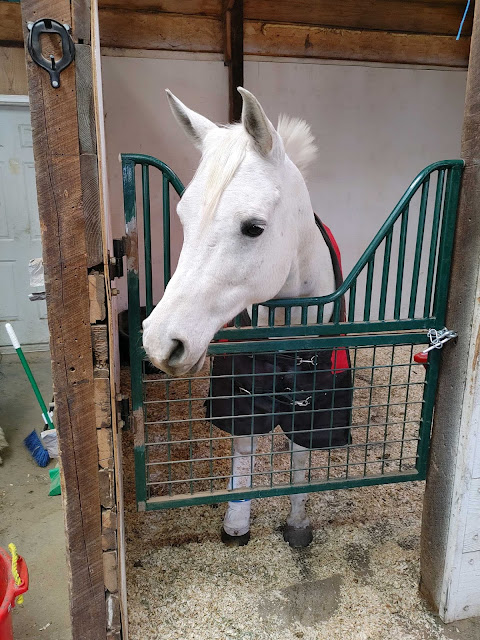 We moved Ashke to an indoor stall and he was on strict stall rest for at least the first two weeks.
Bandage changes happened every three days, he was on antibiotics for ten days and his only activity was a walk outside his stall, turn in a circle and walk back in. 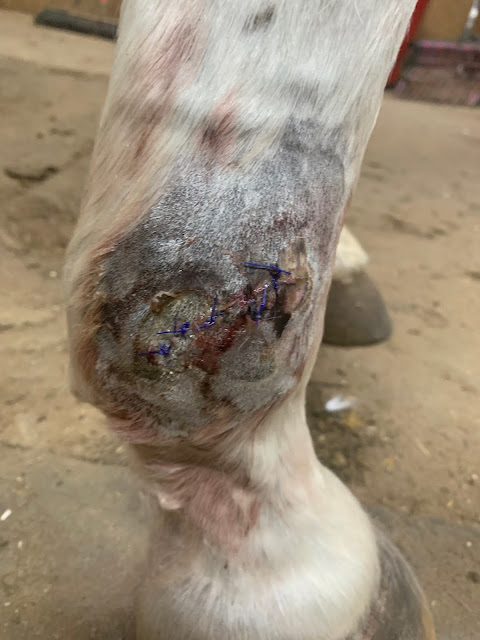 The first bandage change. No signs of infection. No swelling.
Barely off at the walk. 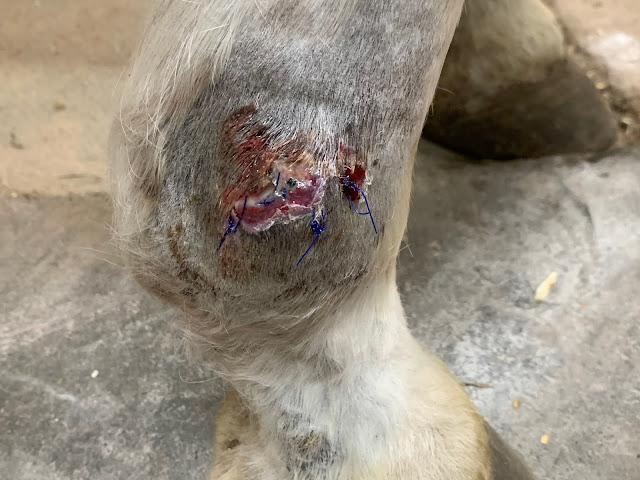 Two weeks in. I was finally starting to breathe again, since I figured no joint compromise or infection at that point. 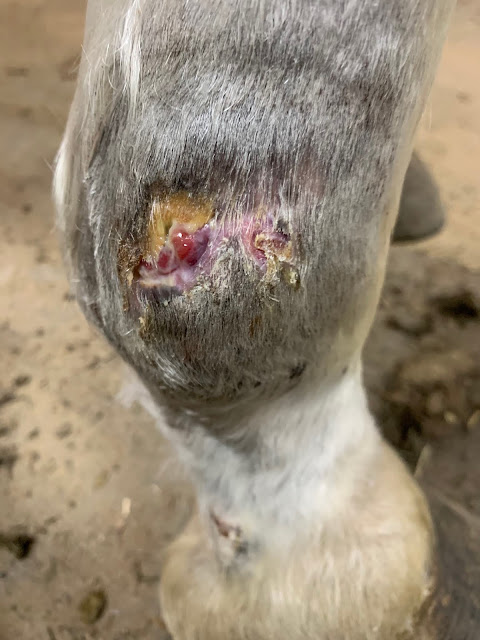 The bandage change after the stitches had been removed.
At this point, walking up and down the barn aisle was allowed. 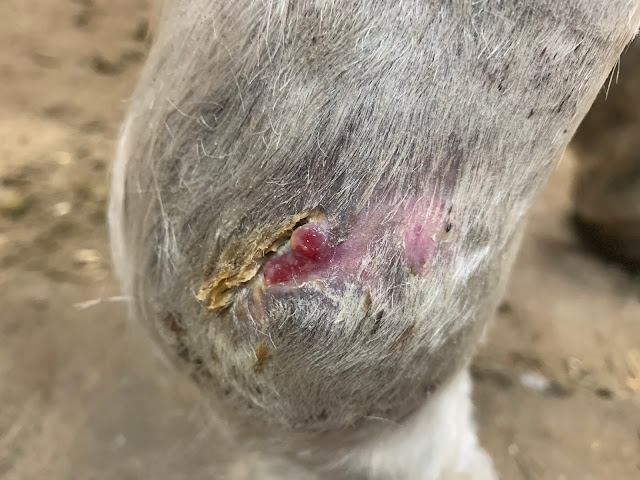 This was at close to seven weeks. We were walking a lot, around the barn, and Ashke was almost uncontrollable. I ended up getting a nose chain because he was too difficult to try and lead. It kept his feet on the ground when we were outside. 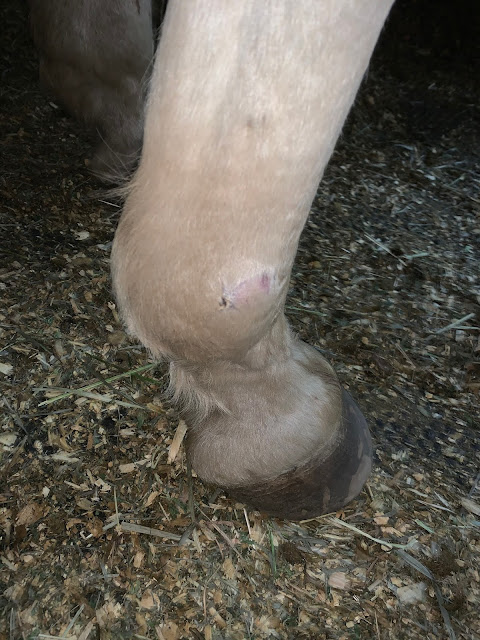 Finally, after eight weeks we were cleared to start work again.
He is staying in the stall for the foreseeable future.
Here's the deal. On the morning that Ashke hurt himself, five other horses in the barn were either hurt or scared by something unidentified. Ashke was injured, as was the horse next to him, but the other horses have lost their freaking minds. We went from horses that were settling into the new place and beginning to work again, to horses that are a struggle to handwalk any where on the property. They are definitely in fight or flight mode.
I think there was a big cat. I don't think it came into the barn area, but I think it got close enough that the horses could smell it. At the back of the property (which is 50 acres) is a field filled with tall trees and deep grass and deer. The property runs along a ditch, that leads back to the St Vrain river. The deer and elk have been pushed out of the mountains from the massive loss of food due to the rampant fires that hit us in August and September. There have been reports of big cats on the east side of I-25 in the past month, following the deer that are feeding off the harvested fields. Single males can have a range of almost 400 square miles and they follow their food source. The horses know something is off and although it could be a bear, those should be hibernating and not stalking horses.
Amanda moved one of her horses to the other barn where Laz is living. She went from a wild, unsettled horse to calm and focused in a day. With the exception on one of our barn family, we are all moving on the 26th. 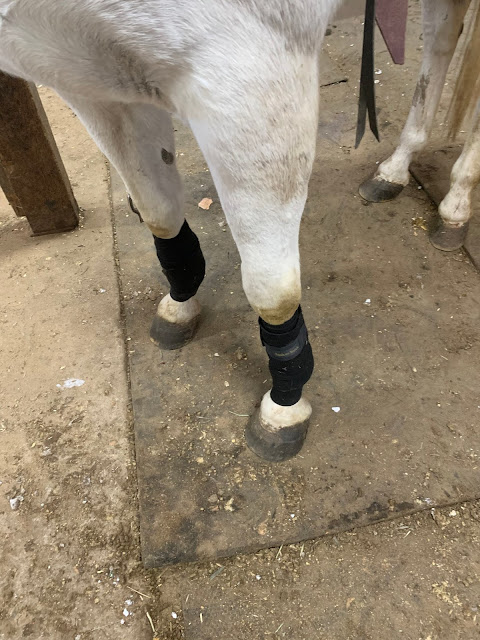 We have started back under saddle, with leg support until he is stronger and back in full time work. 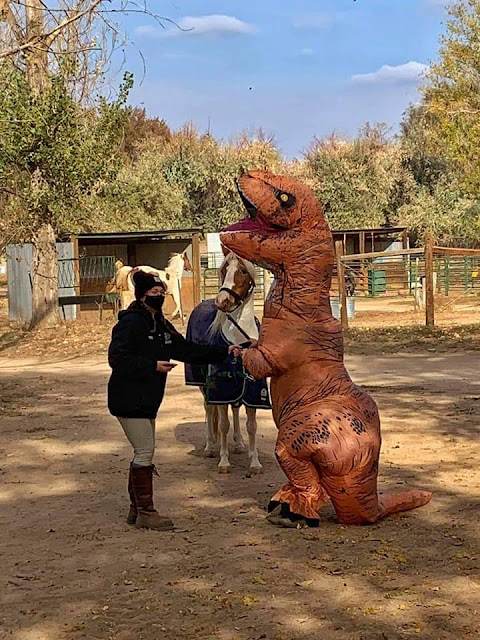 This was a couple of weeks ago.
I just can't even. 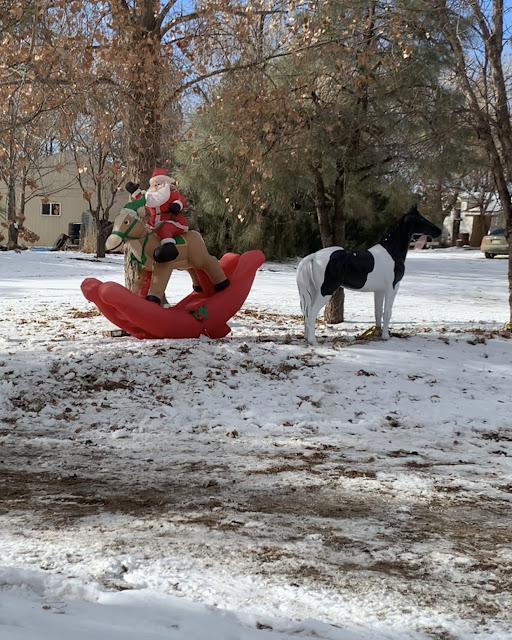 This is set up between the barn and the indoor, next to the ice covered path. It has been joined by three other inflatables. One of the horses walking to the indoor on Saturday, slipped and fell on the ice. Thankfully, no one was hurt.
Ashke got shoes put back on in support of his injury. The stability in the arena seems to be much better with shoes on. He is being ridden in front boots (BOT Royal Work boots) and that seems to be helping. We have limited our lessons to half an hour and I look forward to being able to wash him enough to be able to clip him at the new barn.
Happy holidays, everyone! May the returning light bless you in the year to come.