Ashke did great today. We had the arena to ourselves, so I turned him loose and let him be a fool for the first fifteen minutes. I watched him. And went to the bathroom. Then came back and he was still tearing around at the gallop. He was puffing pretty good by the time he was finally ready for me to ride him.

I got on and we started around the arena. Four steps in someone drove by the end of the arena and threw snow up against the garage door at the west end. Ashke went sideways and backwards. Then, another ten feet past that he went sideways all snorty and spikey at the blue poo bucket sitting next to, but outside the rail. I was pretty exasperated. It's the same bucket that is always there. I made him approach it and get his snorts out. There was one more incident when we reached the far south end and he saw the water bottles sitting on top of the podium. He shied and then walked over and started trying to knock them off. He was being quite the pill.

Then he settled and got to work. We did a lot of trotting where his head was at the vertical, flexed at the poll and he had lifted his back. In both directions. Then we did some cantering up and down the arena, stopping at the end, then backing and trying for a roll back. He struggled with this today. He wanted to turn on his forehand and start back the other direction, instead of turning on his haunches. I think with all of the cantering he had done prior to the ride starting, plus all of the trot work we did, he might have been feeling a bit tired. Ibn (another Arabian gelding at the barn) came in and rode with us for a bit. When I got off to be done, Sally, Ibn's rider, asked if I wanted to let them play.

We unsaddled and turned them loose. 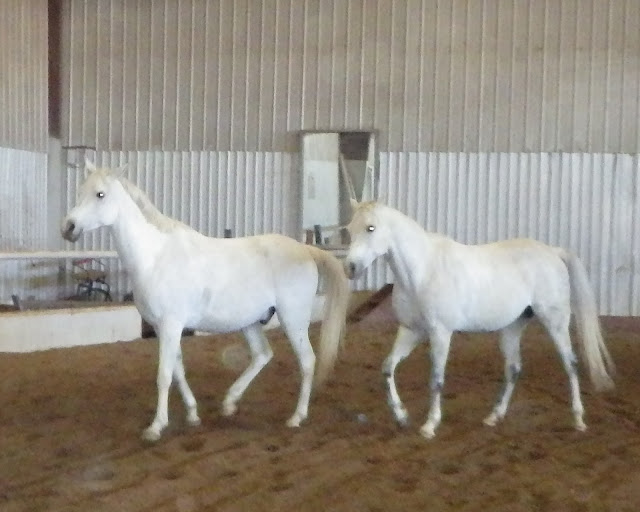 Ashke is the one in the front. 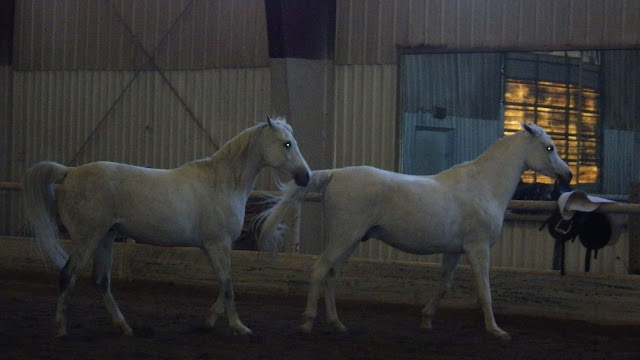 Seeing them side by side highlights where Ashke needs to gain weight and muscle. His shoulder, back and butt. 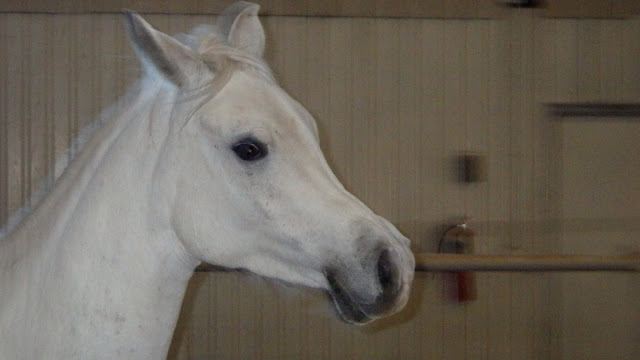 Ashke, wild eyed with a hair up his butt. 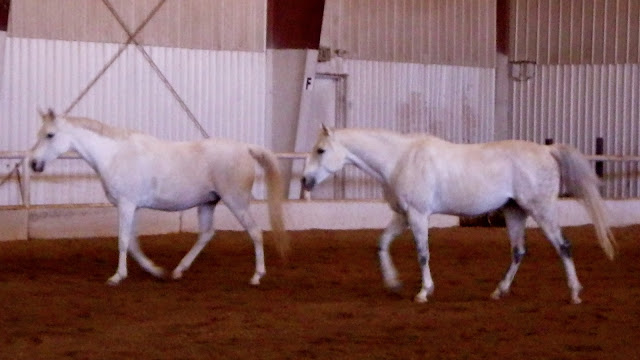 Sally told me that Ashke keeps his tail flagged when I am working him. Ibn only does that when he is loose in the arena and playing. At one point they both stopped and did their blowy snort at us. My camera didn't snap quick enough to take a picture, however. 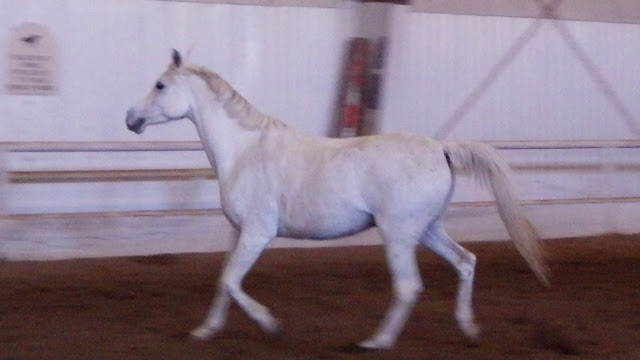 I'm glad, in looking at these photos, that I added some alfalfa to his diet, because I think he lost some weight since I took him off the mix. The muscle has receeded from his shoulder and butt. 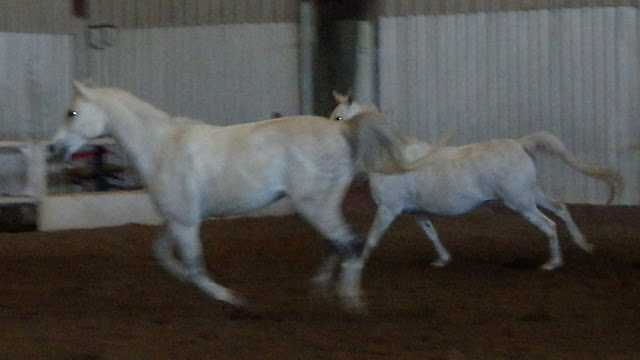 The two of them ran long enough that Ashke was panting at the end of their little jaunt.

We went to catch them and they took off again. 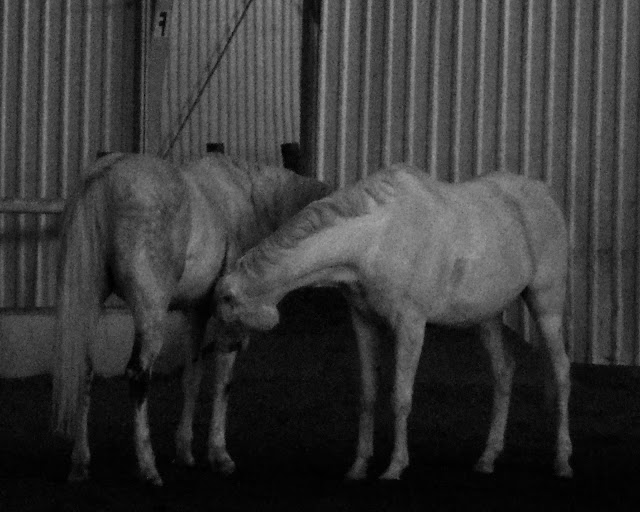 I wish this picture was clearer, because I really like it. 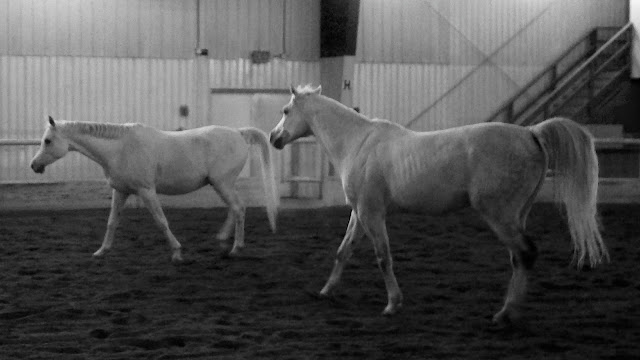 I also need to get the muscles across Ashke's barrel to firm up, so he doesn't look so pot bellied. I think it will just take riding time to accomplish. I'm hoping that as his topline gets stronger, from lifting his back, that his belly will firm up as well.

My plan, going forward, is to get four rides a week. Tues and Thurs nights, and Sat and Sun during the day. That will leave Friday night for our Family date night. Hopefully, he will regain the muscle he's lost and will definitely gain strength on the topline.

As a bonus for reading: 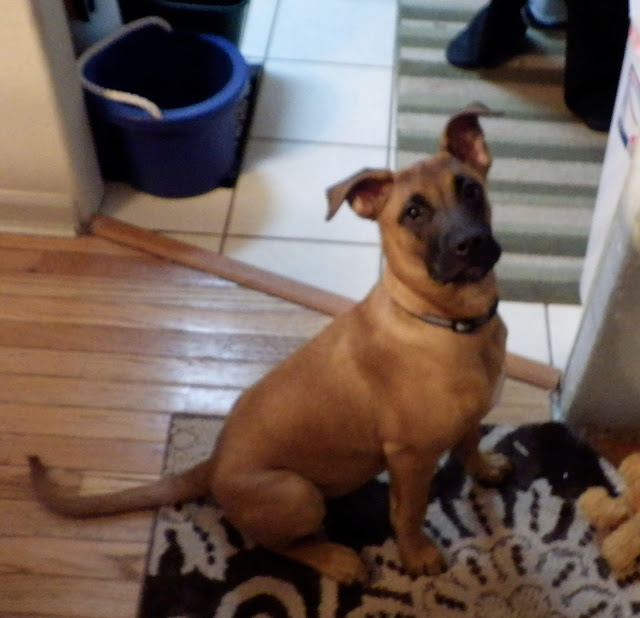