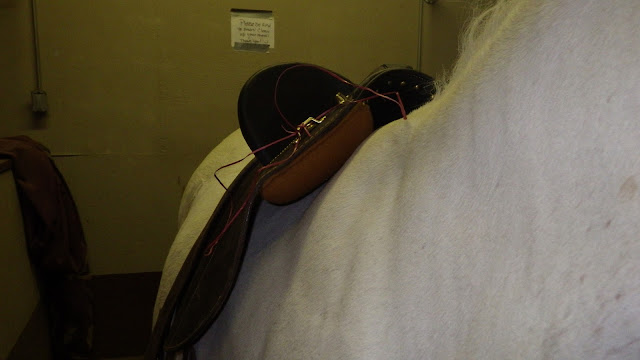 Does not fit. Not even close. 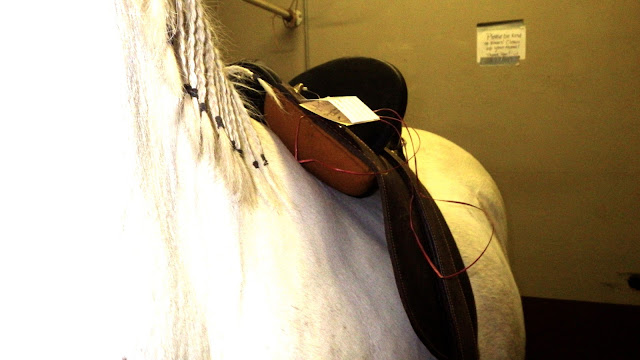 Tight in the top of the withers but widely flared at the bottom. 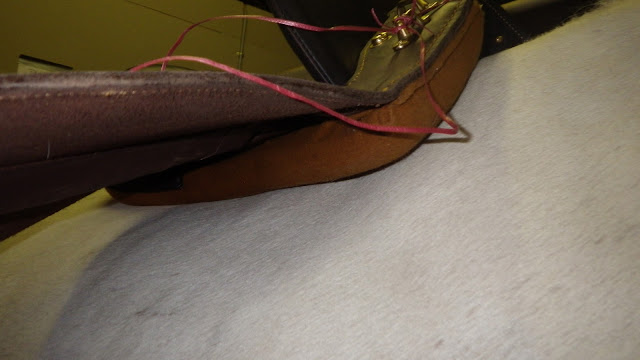 Does not contact his back on the sides for almost a quarter of the way down the saddle. 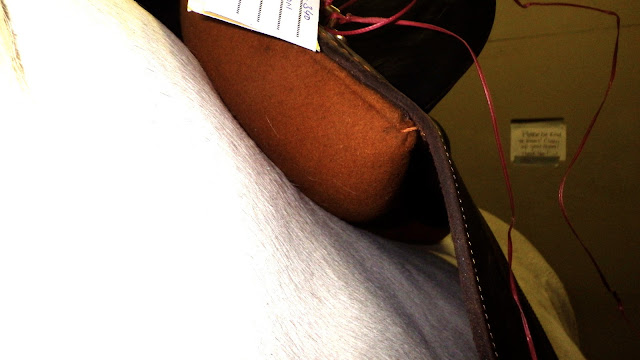 I can see how tightening the saddle down across the withers is going to cause the rear of the saddle to rise. 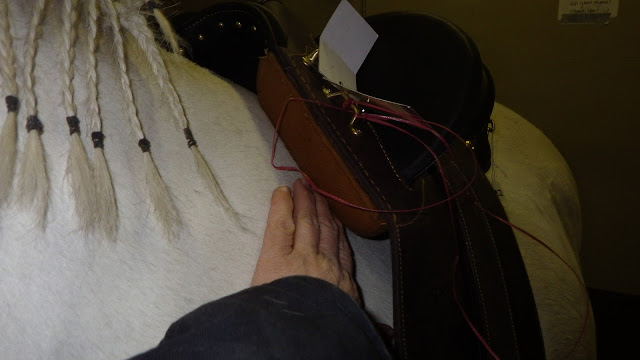 My hand is resting on his shoulder with my fingers under the saddle and the saddle isn't touching me. 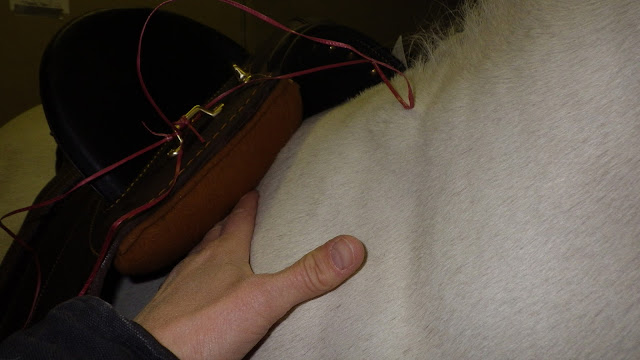 Even more space on the other side.

I sent pictures to Ricki at Down Under. I plan on returning the saddle on Friday.

Sally, owner of Ibn, was there and I was telling her my saddle woes. She said she had to buy a saddle made specifically for an Arabian. She pulled it out and we tried it on Ashke. It fit perfectly. It is a Veach Endurance Saddle and as far as I can tell, Veach stopped making saddles in 2010. Sally isn't interested in selling it either.

At the urging of Nicole and pretty much everyone else, I am going to contact Bev at The Tack Collection to see if she has any ideas about a saddle that might fit. Until then, I am saddleless. I figure I am going to work Ashke with a surcingle and side reins on a lunge line. He needs to continue to work and move, while I figure out what to do. The good news is his back is much less sensitive to the touch today (it's been eight days since the last time I rode) and he was moving both legs equally.

Nicole was worried about taking Cali outside because she didn't want to get cold air in her lungs. I wasn't worried. When I was younger I rode all the time in any type of weather, as long as it wasn't too cold to give me frostbite. Ashke was being a complete idiot over Cali, so I took him out and made him play in the round pen. Nicole said he was tracking equally with both back legs. We walked around the barn a bit and then I took Ashke out to the big outdoor arena while Nicole put Cali away.

I turned him loose and he went crazed Arabian in the snow for a good ten minutes. 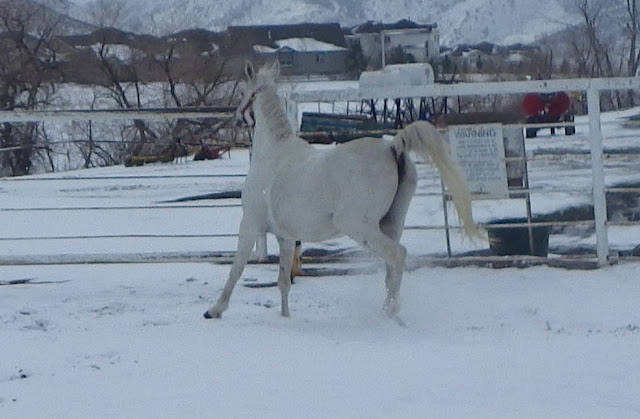 Ashke would tear down to the far end of the arena, turn around and do the Arabian version of skoodle butt back up the fence line. (Looked like a race horse.) 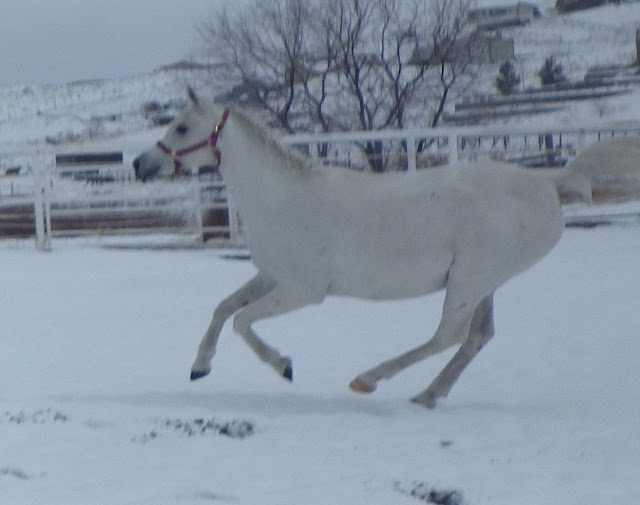 He was running too fast for me to get a great picture. He seemed to be having fun, that's for sure. 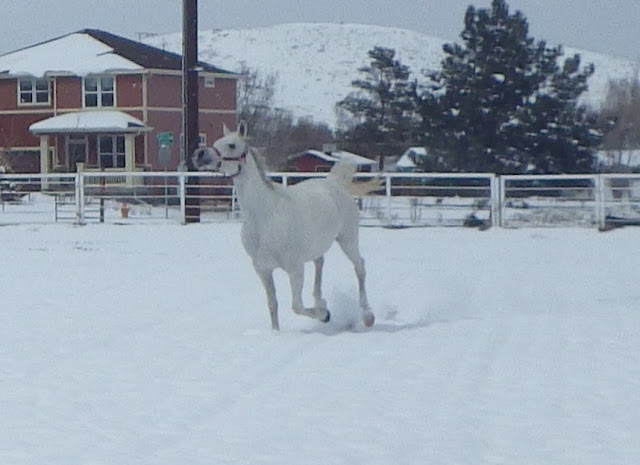 He sure didn't seem to be hurting today. If I can lunge him a couple of times a week until I get the right saddle, I hope he won't lose any of his conditioning. 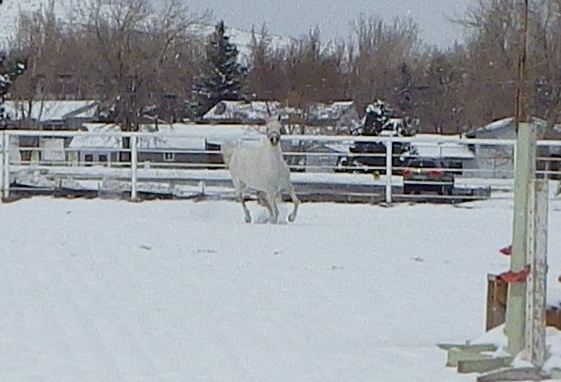 Trying to photograph a white horse in a snow covered arena under a gray sky with snow falling is a challenge my camera was not  up to.