I should have posted yesterday after we visited Down Under Saddlery, because I was pretty frustrated with the result.

First, let me say that I love riding in an Aussie saddle. Second, I really can't afford to spend $3000 - $4000 dollars on an English endurance saddle (or really any other saddle for that matter). Third, since I had already bought the saddle, I felt pretty committed to getting it to work, otherwise it's a thousand dollars out the window. I'm already feeling pretty guilty about the amount of money we've spent on the horse - I just didn't see how I could justify walking away from something I've already spent the money on.

I took the saddle in and talked to Ricky again. She was the one who recommended I buy the style saddle I ended up with, after reassuring me it was the best saddle they carried for an SE Arabian. I have been back to the store seven or eight times, trying to figure out why the saddle just didn't feel right. I showed her all of the photos I had taken (on my computer so I could edit them for close ups) and showed her the saddle pad and told her all of the things I had been experiencing.

She told me everything looked normal. She wondered if perhaps I wasn't riding the saddle correctly. I about lost it at that point. I asked her to explain how I should be riding and what she described was how I was riding. I think she knew at that point how offended I was at the suggestion that my riding was what was causing my horse to be back sore. In her defense she had a migraine and was a little short. (I also think she was tired of trying to figure out my saddle problem.) She also suggested that Ashke just didn't want to work. I know that's not the issue. The issue is the saddle. We finally worked back around to talking about the issue with the saddle.

I showed her tons of pictures. Based on the pictures where the back of the saddle was lifted off Ashke's back, and some pictures of the front of his saddle, made her believe that perhaps the saddle was too wide and needed to be narrowed in the front. She said it looked like I had been riding downhill. Since this was also what Diane suggested might be the problem, I was willing to try the fix Ricky suggested. She shimmed the front of the saddle with about 1/2 inch of wool felt. We didn't want to adjust the saddle frame, because you can't make it wider once it's been narrowed. After more than an hour of talking, I walked out with a saddle that had been shimmed to see if it made a difference. 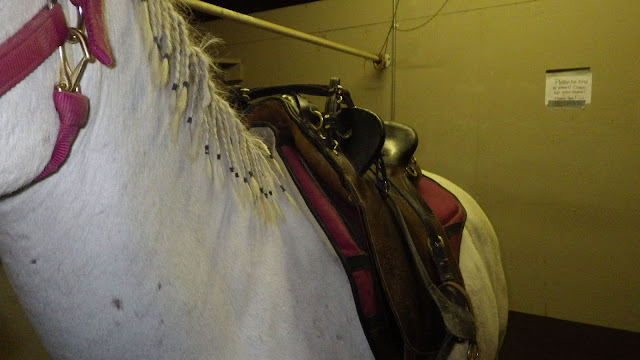 It made the issue worse. Narrowing the front raised the front, but did nothing for the rest of the fit. 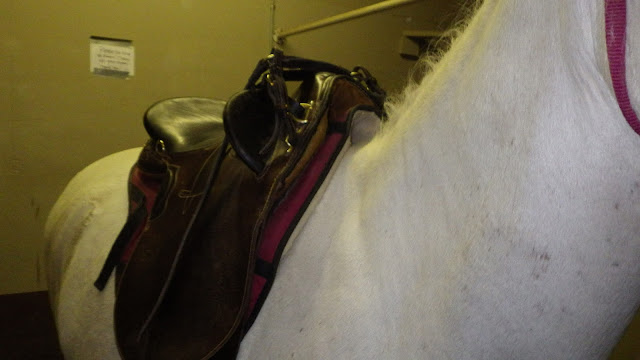 Even with the Equipedic pad, which was recommended for fixing any issues with my saddle, you can see that the front of the saddle isn't sitting correctly. 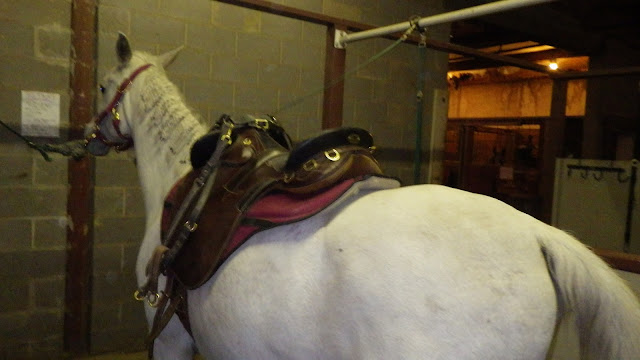 It was even worse in the back. Do you see under the saddleblanket? I'm pretty sure that was not the intended result. 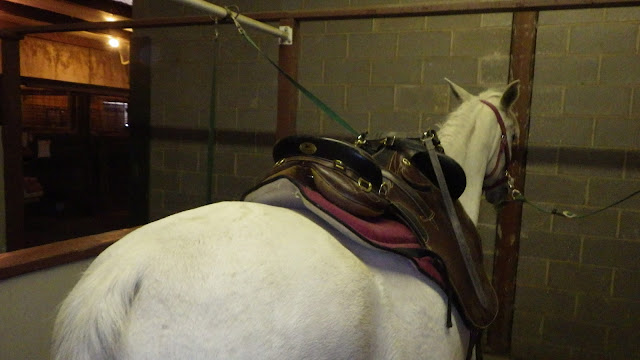 The back of the saddle isn't in contact with his back. I finally realized that what was happening with the saddle was it had a fulcrum point where the overgirth was and tipped and tilted forward and backward with the motion of the horse. No wonder Ashke said it felt like I was a fruit loop. The saddle has been moving. There was no pressure on my hand in this picture. That's how far off of his back the saddle is lifted with the girth tightened. No wonder it felt like I was off balance. No wonder Nicole couldn't post in this saddle. It's because every time we shifted our weight, the saddle moved. It explains why I have struggled to ride at a trot and canter. The damn saddle was pounding me in the middle of my back. 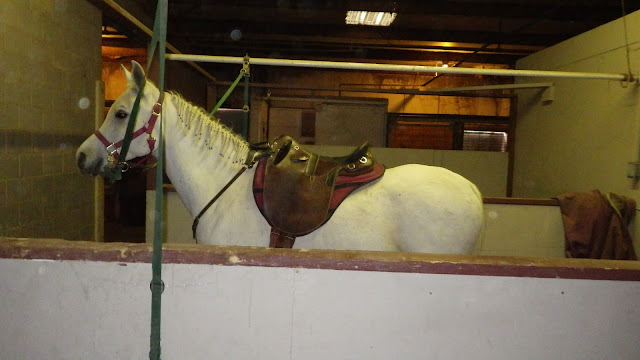 It looks a little bit higher in the front than it did before. But it doesn't matter. The saddle just doesn't fit his back.

I didn't ride. I took him into the arena and let him tear around for a bit. I tried to get some pics which turned out pretty lame. 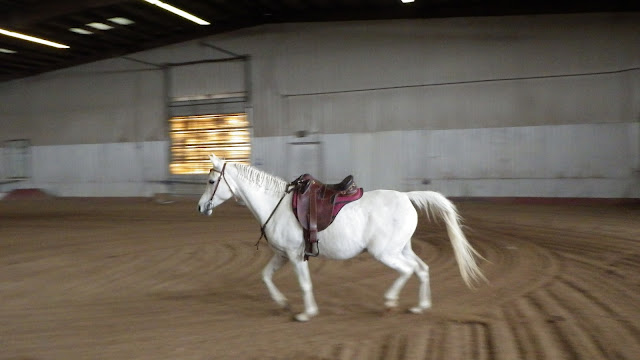 You can't really tell, but every time he extended his trot or cantered, the saddle flopped around on his back. 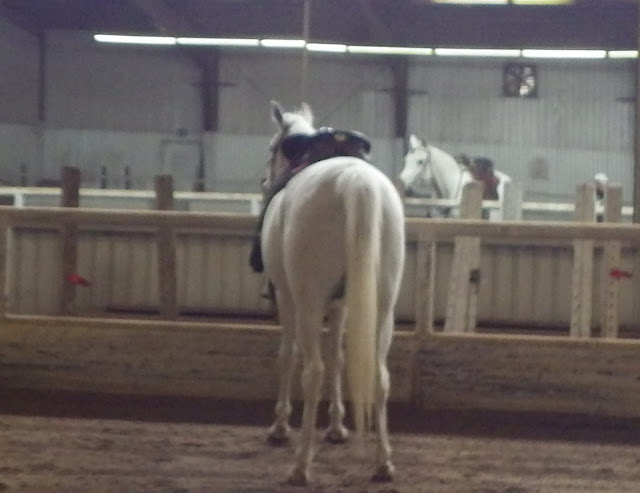 Ashke has figured out he can watch me in the mirror. I think that's pretty amazing. He is incredibly smart.

I took him back to the barn and unsaddled. Nicole was there by that time and she knew I was really upset when I got back to the barn. She was in the process of moving Cali, since that silly horse is still eating gravel. You just have to wonder about horses some times. Gravel is not a food source. I unsaddled Ashke and took some pictures of what the saddle had done to his back without me in the saddle. 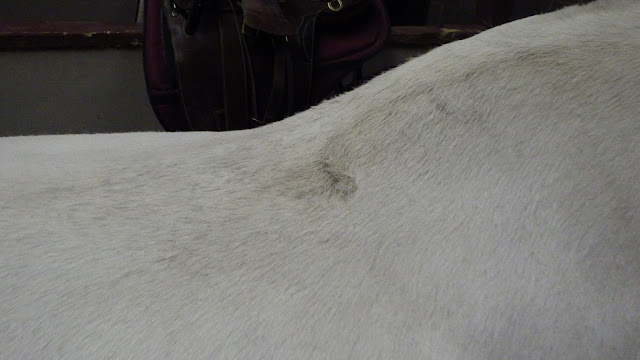 This is the twirled and knarled hair I found under his saddle. I think this is the focal point for the pivoting of the saddle. I've seen this type of hair disturbance in the past, but blamed myself for whatever was causing it, thinking I hadn't saddled him correctly. 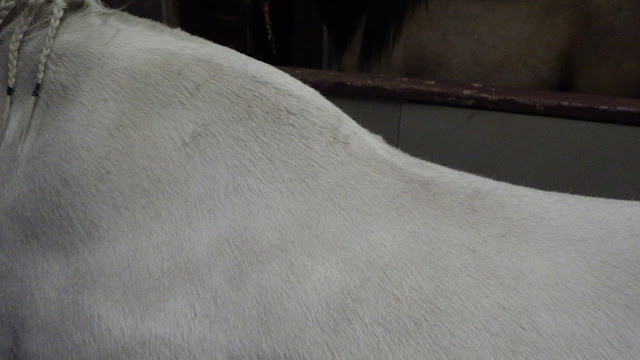 It's not as obvious on this side, but the hair was pushed backward right where the overgirth is.

Nicole came over to check Ashke's back. He is sore right where the overgirth is, sore where the saddle was bouncing on his back, and sore over his right hip, which we knew about. Nicole brought out her saddle to see how it fit on his back. It didn't.

At that point I was feeling completely overwhelmed and started to cry. Nicole was very sweet and just told me we would figure this out, but I was feeling like I had destroyed my horse. I didn't know how I was going to tell J that we needed to spend more money on a new or different saddle for my horse. I wasn't sure when I would be able to ride my boy again. Nicole kept telling me it would be all right, that she had gone through the same thing with Emma, but all I could do was put my head down on Ashke's back and bawl.

Nicole went to check Cali's back and she was sore as well. The weather, which took a turn for the worse today, may be a contributing factor. We talked about having a plan to help strengthen Ashke's back and Nicole offered to help me with the Pessoa system and building his topline. She said we could trail ride at a walk and give him time to heal. I loaded up my saddle, put my horse away and headed out into the storm (10" of snow and high wind blowing it sideways today.)

On my way home, I called and talked to J. I told her that the adjustment had made things worse, not better and I wanted to go back to the saddle shop today. She agreed. I told her how awful I was feeling about the saddle not working and we talked a bit about my childhood, riding bareback and saddles in general. She told me she wasn't stressing about the money and that I needed to find a saddle that worked for both of us. If that meant I needed to spend more money for both of us to be happy, then I should plan on spending the money.

It made me cry for the second time today.

We took the saddle back to the store. I told Ricky it was even worse. She was at a loss and called out her boss. I told him all of the issues I had been having and all of the things we had tried. Ricky asked him what we should do and he suggested the Longreach Endurance saddle. It is dressage saddle sized and super light weight (about half of what the Master Campdraft was). It is shorter and should fit his back better. It is girthed with a dressage girth and I got a 17" (the MCD was 19" - HA!) which fit very nicely. I was able to post on the dummy horse, something we hadn't been able to do in the old saddle because of how it fit. I really like the saddle and am excited that I don't have to replace all of the gear I have already purchased. I did get a new saddle pad, since the equipedic is pretty imprinted with the shape of the old saddle.

The plan is to check the fit tomorrow. I am going to take pictures and a wither tracing, then take the saddle back to the store for them to fit. That is the first part of the plan. Hopefully, the saddle fits him and feels good for both of us. I hope to either have returned the saddle and moved on by Friday or have it fitted to him for Diane to check when we are there on Saturday.

The second part of the plan is to have Bev from The Tack Collection come out and check the fit of my saddle and Nicole's. I am going to tell her Ashke's story, tell her the issues I have been having, explain what I want to do with Ashke in the long run and then ask her to bring out some saddles I can try. I am really interested in the Keith Bryan Pathfinder Endurance saddle and Nicole is sure she will have some other suggestions. I am hoping to plan that for the 3rd of April.

And so the saga continues.
Posted by Cricket at 9:45 PM