Wow! Yesterday, Saturday, March 30th, marked the one year anniversary since I brought my filthy, starved-almost-to-death, broken boy home. We celebrated by taking him to see the vet/chiropractor/accupuncturist Diane Wagner for a check-up on his right hamstring and overall condition.

She pronounced him sound. Sound! And said it was a testimony to his superior athleticism that he has recovered so completely. The short striding was gone. All of the points in his body that were telling her last time he still had issues were gone. She suggested I do a round of sand clear and then keep him on the maintenance going forward. His feet were perfectly balanced, meaning both frogs on his front feet were 6 cm wide at the base and 5.5 cm on the back. Diane says this is a way to tell if his body is balanced and he is using both sides equally. Remember, the first time all four were all over the board and indicative of Ashke compensating for his right hamstring by relying on his left hind and right fore. The work Diane had done on his poll was still holding and the only issue she could see was the slight mechanical issue with his right sacrial-iliac joint, which may never be resolved.

So, the reason for our visit was three fold: 1) to let Diane assess his over-all condition, with focus on his right hamstring rehab, 2) to have his teeth checked by her equine dental expert, (routine check-up is recommended yearly) and 3) have his sheath cleaned (boy horses can get build up in their urethea track of calcium carbonate and smegma, creating beans.)

Diane started by doing her assessment of his movement, by having me walk him forward and back, trot him forward and back, lunge him in a circle at a walk and trot, and then walk him with her walking next to us. She then checked his feet, measured his frogs, and checked the acupuncture points on his body. The only points that flared were in relationship with SI joint on the right and a couple of points on his back due to our ongoing saddle issues. She told me to stop feeding him any supplements or feed other than the grass/alfalfa I have him on, because he is getting fat. :)

In a side note about the saddle. Down Under took it back and gave me a full refund. I am still on the hook for the Equipedic pad, the chest piece and martingale, the other saddle blanket, the stirrups and the extra girth I purchased. I am hoping to be able to use the breast collar with whatever saddle I decide to get.

After Diane assessed the acupuncture points, she sedated Ashke so Syd, the equine dental specialist, could do his teeth. They both decided he was an expensive date, because he needed so much, but I assured them he was easy. Syd first checked the movement of his jaw and explained that most dentals are done without doing anything to the incisors, which leaves the jaw locked up at the front of the mouth. I know this will impact everything we are trying to do, because he isn't able to flex and release his mouth. Syd started with the incisors. 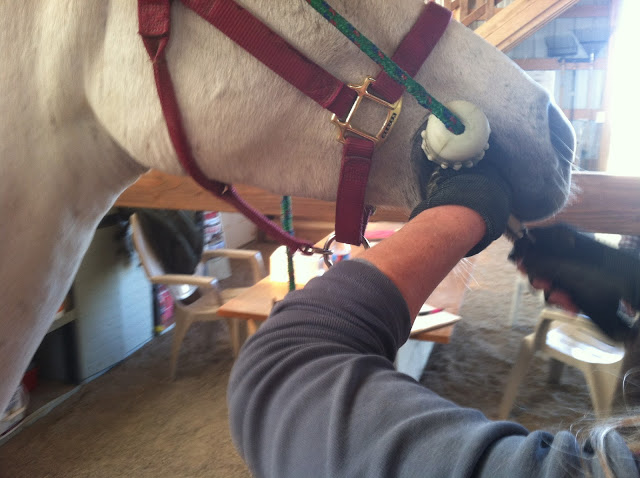 When Syd was done with the incisors, she was able to move his jaw from side to side (the motion horses use to eat). Then she started on the back teeth. 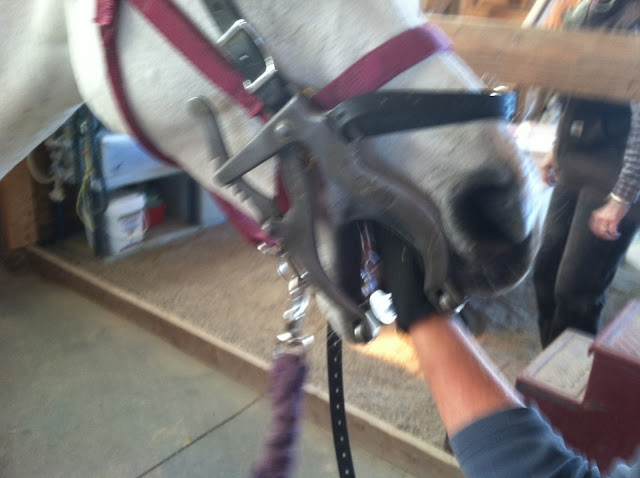 Syd uses her hand and hand tools to do his teeth. The issue with power dental tools is the dremel heats up too much and can cause cracks in the enamel. The other issue Syd mentioned is the tendency to take too much tooth off with the power tools. 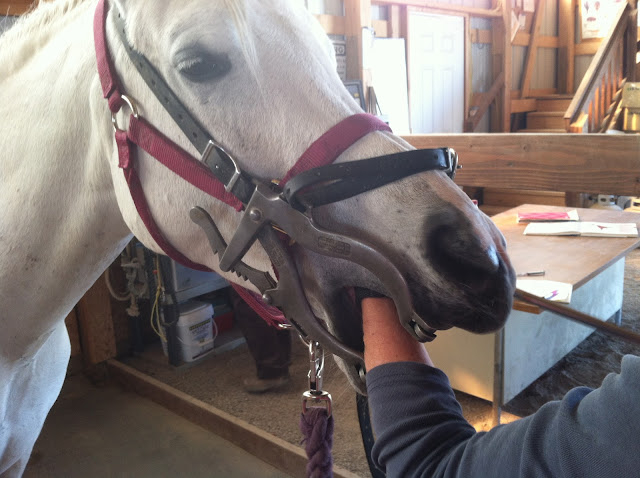 Syd and Diane both agreed that he was way more awake and alert than they expected with such a large dose of sedative. The one thing Syd did was release the speculum in his mouth between tools and between checks, giving Ashke's jaw a break from the pressure of holding his mouth wide open for 45 minutes. 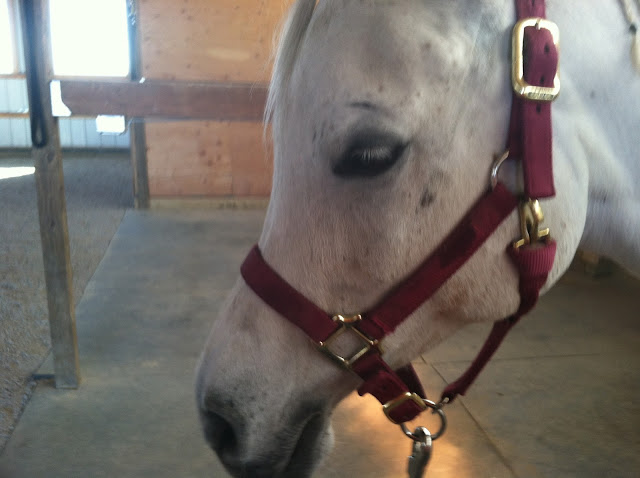 After the dental was done, Diane tried to clean Ashke's sheath. He kicked violently every time she went to touch him. It was obvious the sheath cleaning wasn't going to happen without additional sedation. I told Diane to dose him again. The picture above is the result. He was swaying a little bit from side to side he was so drugged. We stood and waited about ten minutes for him to drop his penis out of his sheath. It didn't happen, so Diane decided to do the acupuncture first in the hopes it would relax him. 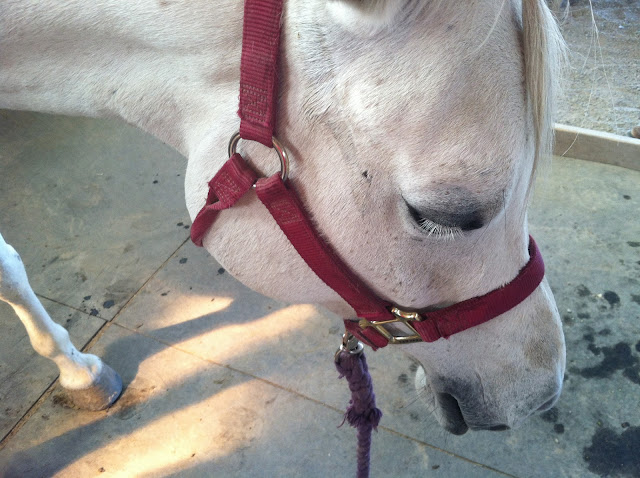 He was pretty dopey. And relaxed. But his penis was still up by his tonsils. 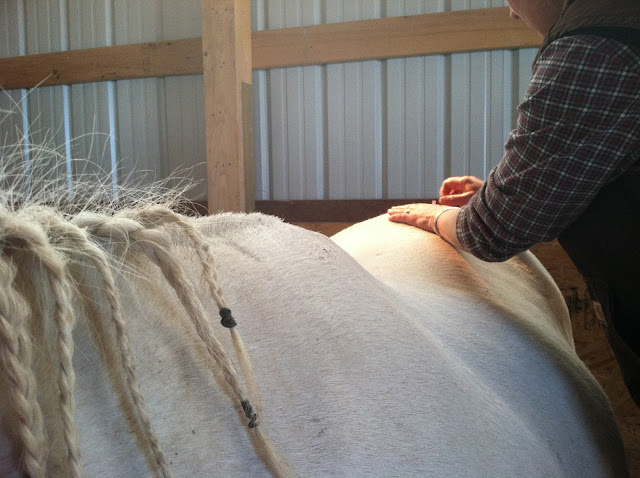 Pokes in his butt. Diane injected a little bit of B12 into each site, which helps keeps the pressure of the acupuncture longer than we can leave the needles in, and the B12 helps with recovery. 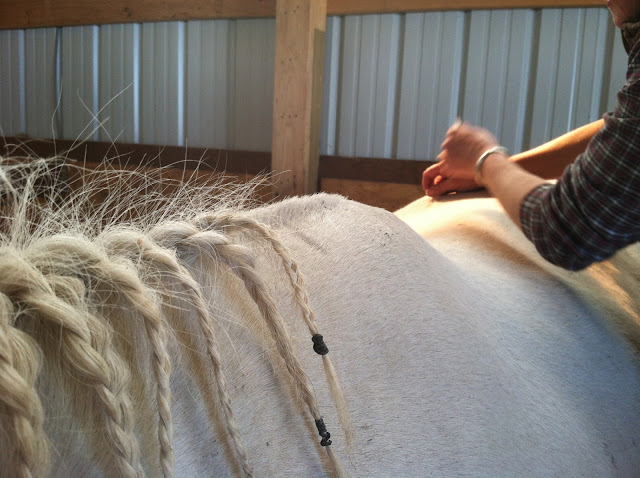 Most of the acupuncture points were over the SI joint on the right side. There were also needles she put in just behind his jaw to help alleviate the tension and energy from the dental. 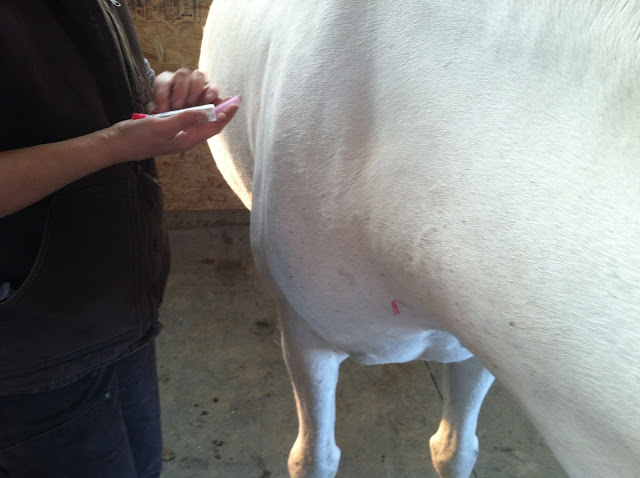 There were also points for his diaphram and to balance his hip. Once the needles were in we waited for the sedative and the accu points to send him into sleep. Or relax him enough that he dropped. Neither happened. 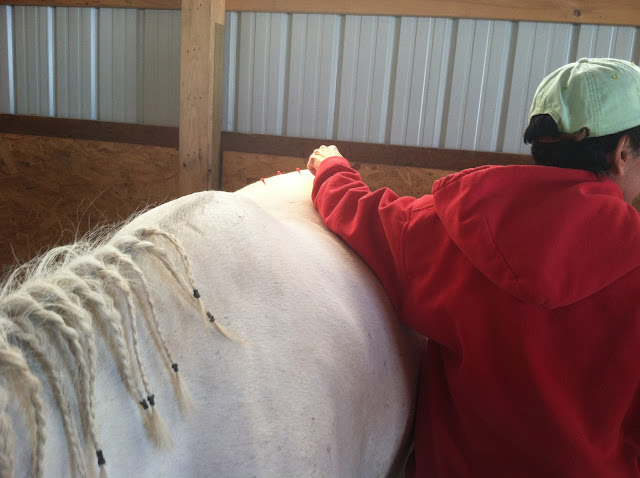 We applied laser stimulation to the areas connected to his reproductive organs in an attempt to get him to drop. He peed like a race horse afterwards, but still didn't drop. Diane decided she was just going to have to do it the hard way and oiled up her glove.

Even drugged to the gills he kicked violently at Diane. I asked Diane if I should hold up his back foot so he couldn't kick. She looked surprised and then said I could try. I had Lisa hold his head so if anyone got hurt by my horse it would be me. I lifted his left back leg and held it braced so he couldn't pull it forward to kick. He tried a couple of times, but didn't have the leverage to pull it away from me. After a couple of tries, he stopped trying and rested quietly while Diane fished around inside. It wasn't easy; she was elbow deep inside him trying to get the final bean. 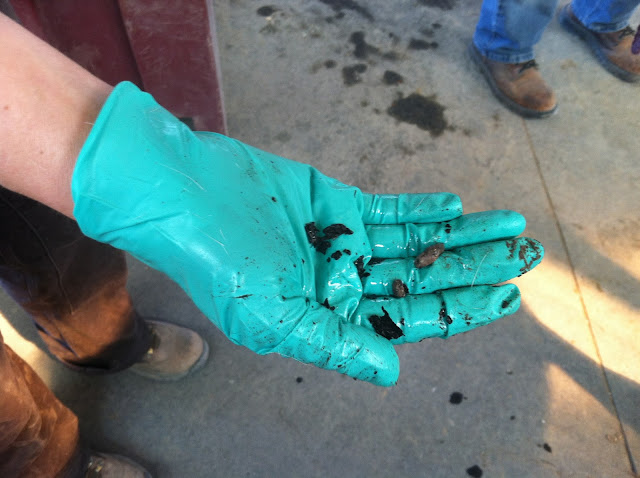 Ashke was drawn up so far inside that Diane really had to work at getting the beans out. She found six total, two of which she smashed trying to remove them, and four she pulled out. Luckily they were soft, not calcified, but still could not have been comfortable for Ashke.

After the sheath cleaning, Diane did the adjustment on his right SI joint. She used the spring activator (just like the one my chiropractor uses on me) to do all of his vertebre from his withers to his tail bone. Twice. Then she adjusted his right SI by using her hands and weight. For the first time it really moved, to the point where Ashke turned his head, stoned as he was, and stared at Diane. You could hear the movement of the joint. And he looked pretty good moving after that. 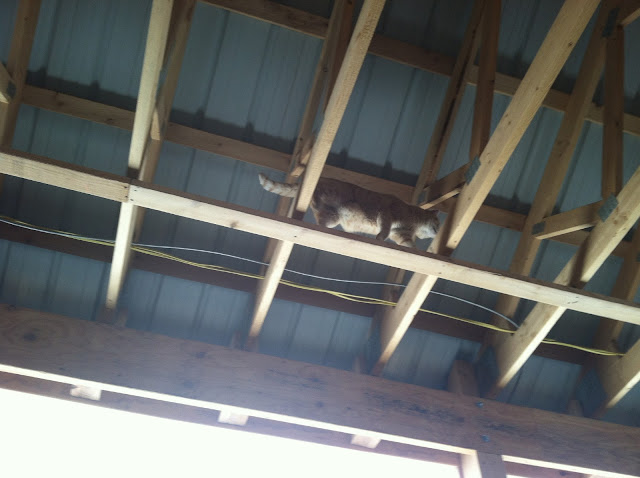 Indiana, the wonderful barn cat, in the rafters of the barn overseeing operations. Didn't bother Ashke, but kind of freaked Amaar out. 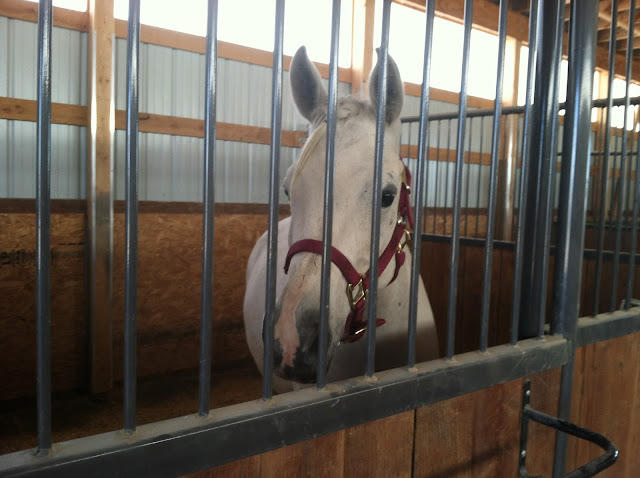 Ashke tossing off the effects of the sedation. We had absolutely no issues with loading out or back. 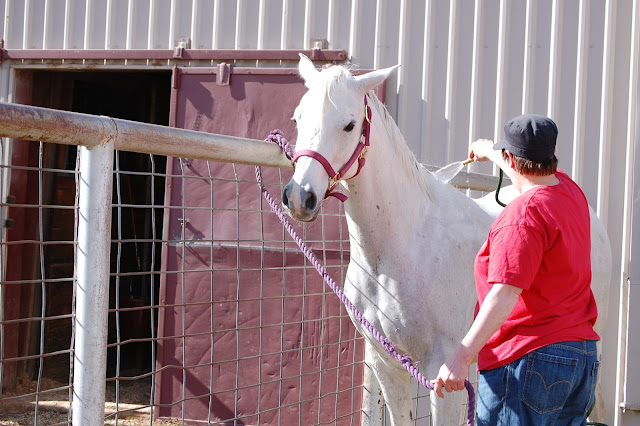 When we got back, he got bathed. He was disgustingly dirty and we wanted him white for his photo shoot. He wouldn't go in the wash stall and rather than force him, we just went outside. 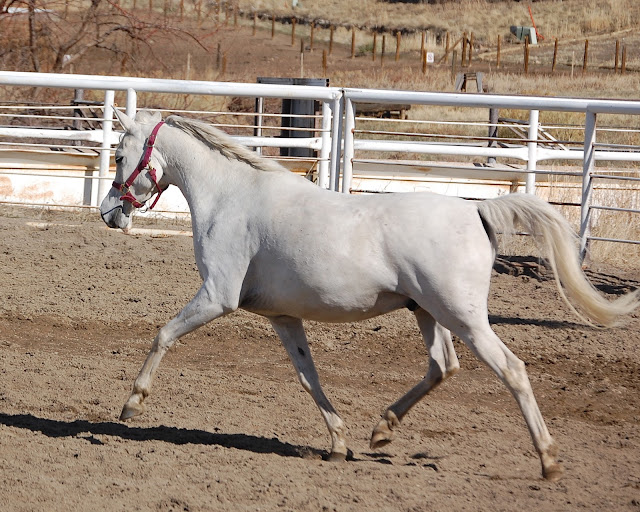 When he was clean and dry, we released him in the arena and just let him expend some energy. 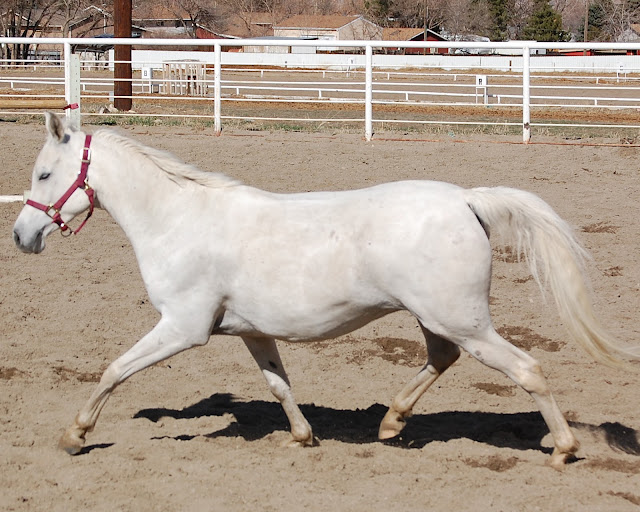 One of Diane's recommendations is to get a Deluxe Balance Training System to encourage him to use his back and tighten his belly and find his center of balance. She suggested 5 minutes in each direction to start and alternate days with riding. She said only a dressage level 4 rider could get him to do what this system will allow him to figure out on his own. I already ordered one. Hopefully, it will be here on Tuesday. 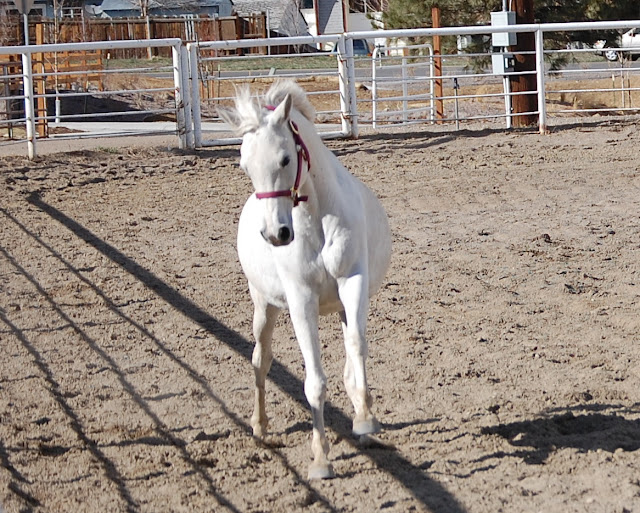 He enjoyed being able to get rid of all his pent up energy. 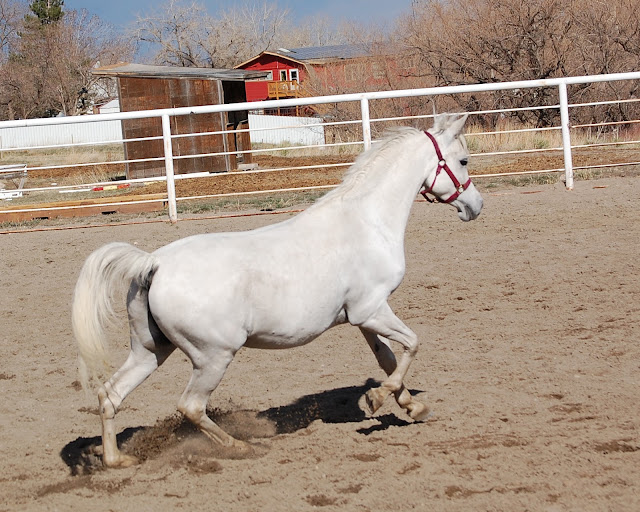 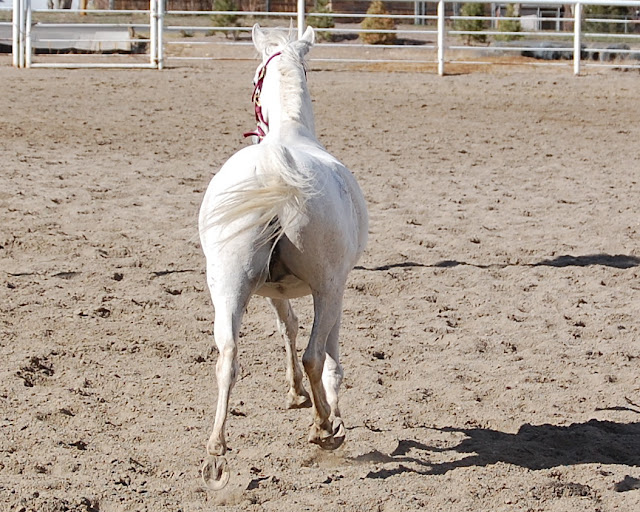 It just makes me smile to see him move. I know he is a little overweight but he hasn't been worked in two weeks and he was so very thin not so long ago. 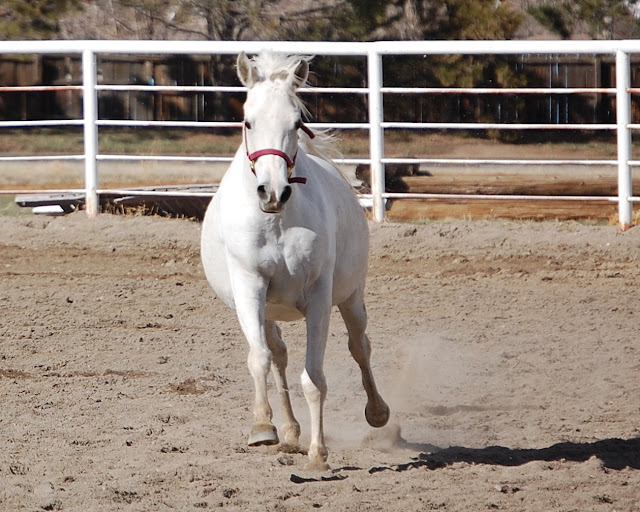 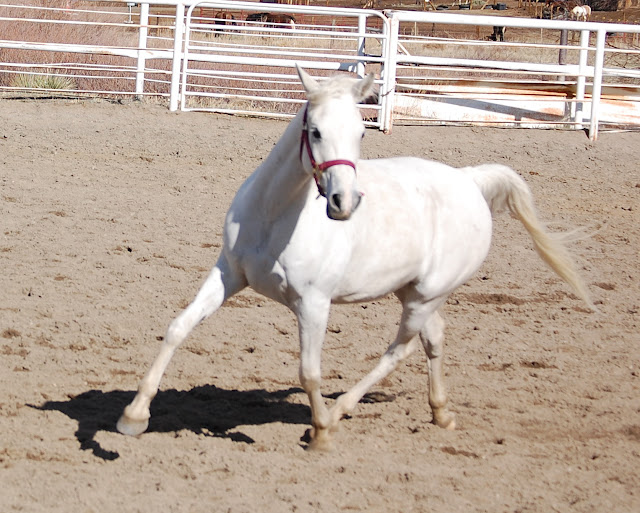 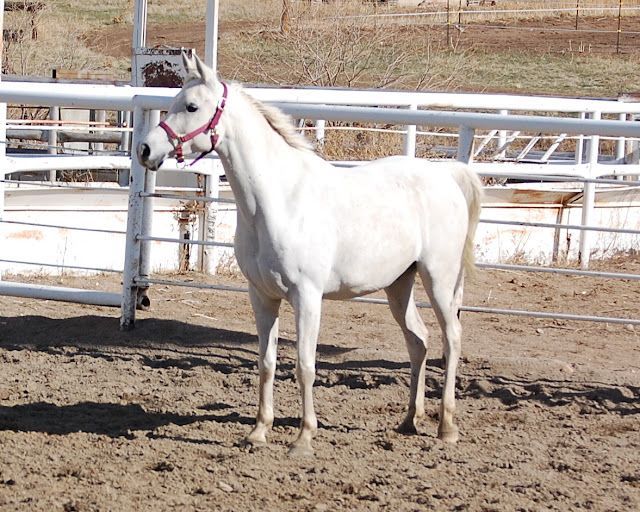 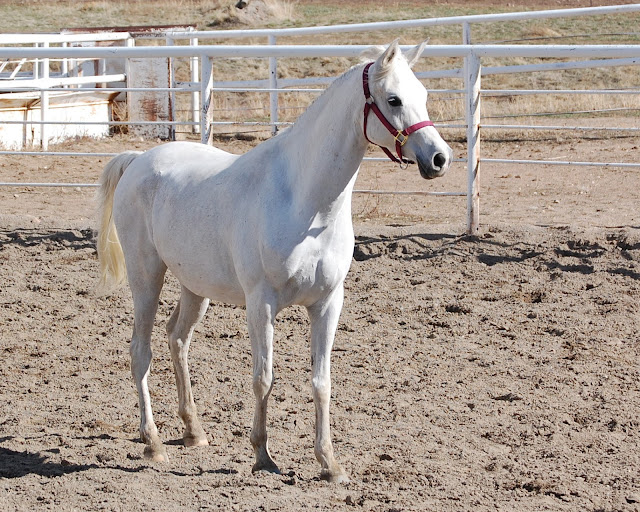 I love this picture. 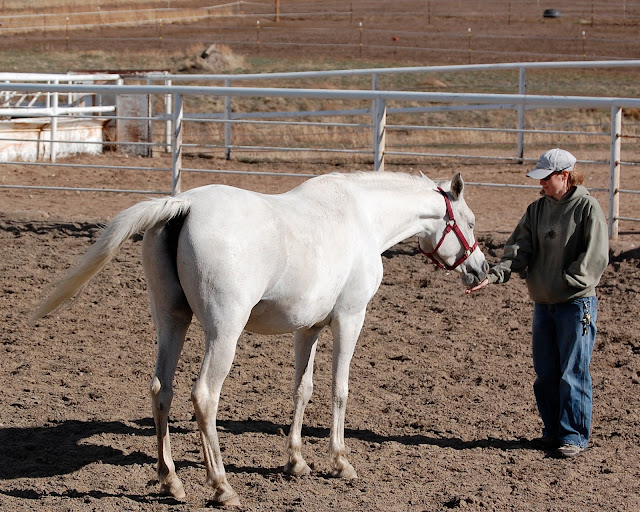 How he let's us know he's done.