Today I took the day off and spent it at the barn.

Ashke had mixed feelings about that.

We started by spending an hour working our way into the wash stall. He bucked and kicked and reacted violently to my request to enter the stall. He's been in there before. We backed the length of the barn several times, and I ruined a cotton lead rope because he pulled back so hard. It was a hot mess and I feel pretty bad about it. I ended up putting the butt rope (come along) on him, which he reacted to with violent kicking, so we went outside and he lunged in a circle until he was tired and then we tried the wash stall again. He threatened to kick, so we headed back outside and he lunged at the trot until he was puffing. When we went back in, he thought about it and then walked into the wash stall.

I didn't wash him. I just had him stand in there and eat peppermints. I petted him. I turned him around and let him look at everything. I told him what a good boy he was. I made standing in the stall as positive as I could.

I still feel bad about how difficult it was and how scared he was at the attempt.

After torturing him with the washing stall, I turned him back into his run (which is about six inches of mud and that special kind of water you only find at barns and dairy lots) and went to get lunch. When I got back he refused to come out of his stall. I waited him out, not wanting to make a big deal out of him walking back to the grooming stalls. We went to the grooming stall and I pulled out a pair of Conair clippers we purchased years ago to cut T's hair, until he decided he hated my haircuts and refused to let me near him. I thought they might work to clip a bridle path.

Ashke stood there like a pro and let me clip him. He's had to have been clipped in the past. The only place he really got antsy about was his right ear, otherwise he let me clip at will. I did his bridle path and over his withers where the saddle and the breast collar have tattered his mane. I clipped the long hair off his face (under his chin and along his cheeks) and touched up the really long hair on his ears. He did great.

Then I braided his hair. It freaking took forever. He vibrated between pawing his displeasure at being asked to stand still so long and falling asleep. 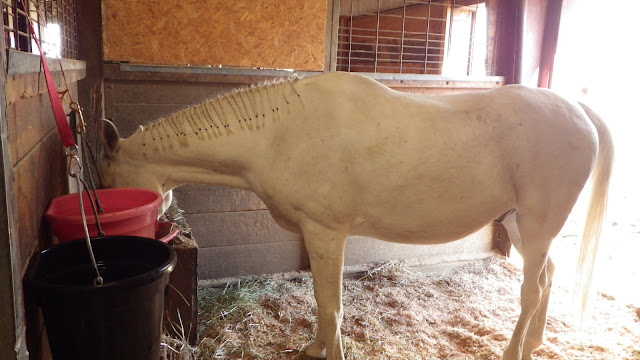 His mane isn't very long yet, but it is thick and healthy. It is all new growth, so that's about what he is going to grow in a year. His forelock is still straggly and thin, but I braided it too, so it will have a chance to grow out.

He looked pretty spiffy when I went to saddle him.

Although he was still a little tired from our earlier blow out, he did awesome in the arena. His trot was great and he lowered his head and raised his back. His walk was swinging and quick. We cantered in one direction and Nicole said he looked amazing. He was relaxed, with his tail up and the canter looked really easy. Nicole was doing a lesson with MT, a trainer at the barn that works with Friesans, and so I mostly kept to myself. 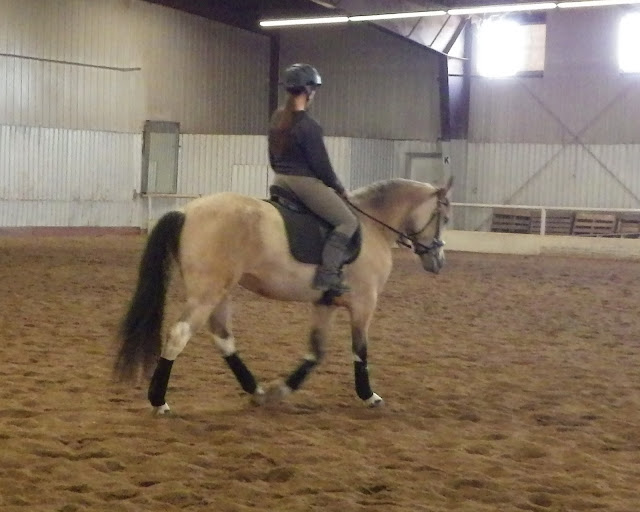 We moved to the center of the arena and worked in the direction of the mirrors. I asked for a leg yield and could see in the mirror when he was crossing in the front. Ashke still has a tendency to counter bend his head and neck, but at least he was willing to move away from leg pressure. We then moved to the very middle of the arena and practiced some stops and rollbacks (just a couple), and then worked on turning on the forehand and turning on the backhand. He did great on both. So we called it a day and went to untack, leaving Nicole riding with MT. 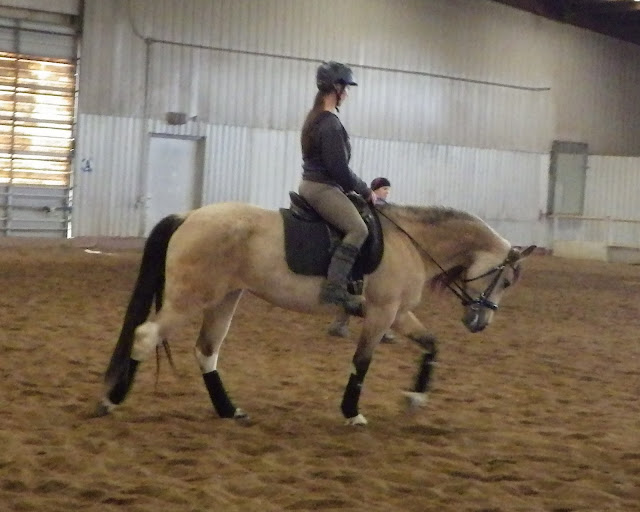 Just about the time I got Ashke unsaddled, Michelle showed up to trim him. His feet were getting pretty long. 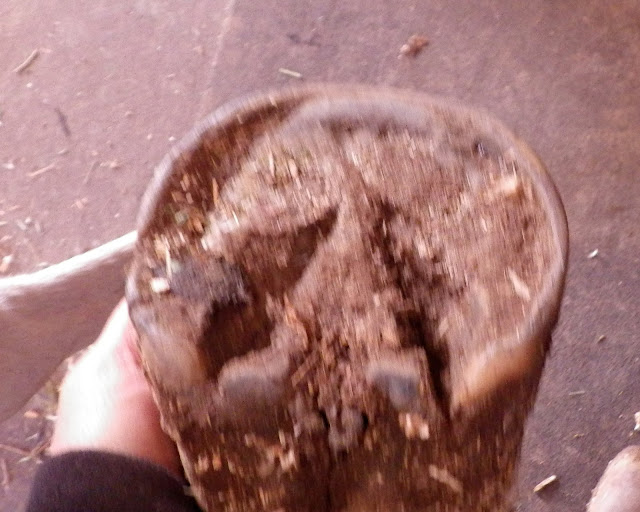 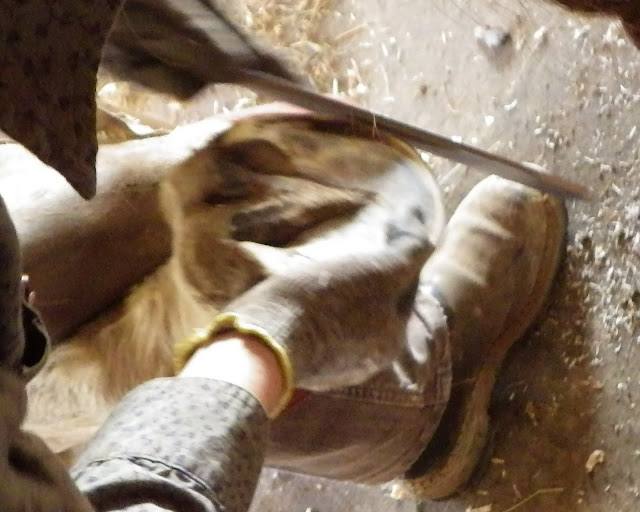 His right front was somewhat funky. He is wearing the toe down on the side, rather than in the front. We think it's because of how he travels due to the hamstring. Tricksey little hamstring mucks up everything.

There was a little bit of bruising on the right front, but again Michelle thought it could be due to the increased impact on that foot as he is trying to find a way forward with his hamstring. 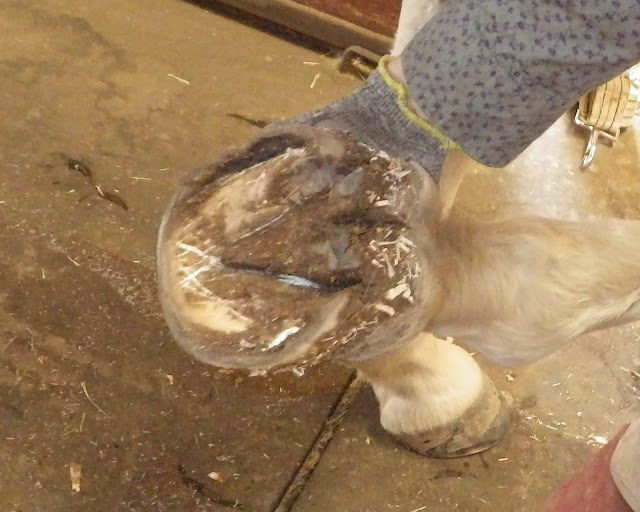 Right hind, pre-trim. His heels are really long, so Michelle knocked them down a bit more this trim. 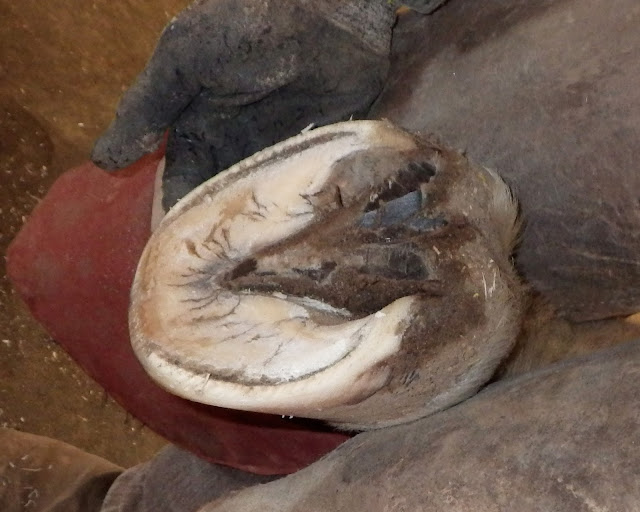 Same foot, post trim. She rasped away the last of the bruise he got nine months ago when he clipped the coronet band in back with his first shoe on his front feet.

Michelle left a little more sole than normal, because she knows we are going to be riding out a lot and she didn't want him footsore. We arranged to have her fit Ashke for boots the next time she trims him. I guess she carries three different types of boot that I can choose from.

That was enough for me. I went home a tired puppy. Ashke is beautiful after his make over and spa day.