We went out on the trail toward the reservoir.

It was cold and blustery and threatening rain.

I made Nicole go out any way. Cali was very good in the arena and perky but listening when we got out on the trail. Once we got going, everything settled down and the ride was wonderful. 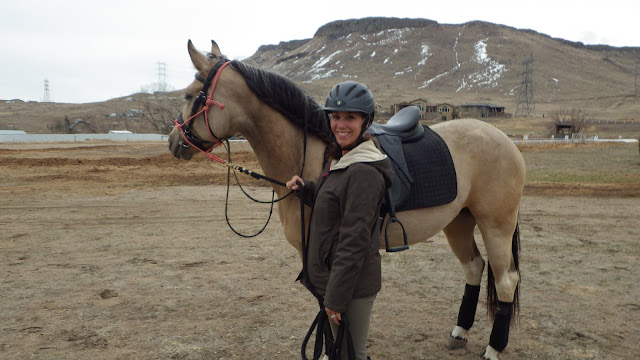 We walked them down to the trailhead, because there is just too much going on between the barn and the trail. There is a stable with tall, corrugated walls that block all sight of the horses on the other side. Seems to completely freak the shit out of the horses. Then on the other side of the stable is a small Urban farm with goats. That's fun. Then there is a path along the creek with at least six sewer hole covers, which is Ashke's own personal bane. 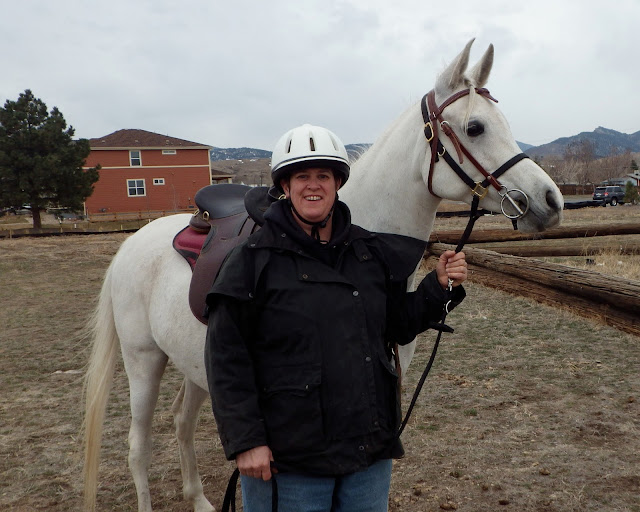 Past the sewer covers was a small park with playground equipment. Then a fire department station complete with fire truck. Both of our babies did great. Cali got a little uptight when Nicole first mounted, but with consistency and calmness she mellowed out and our ride went on. 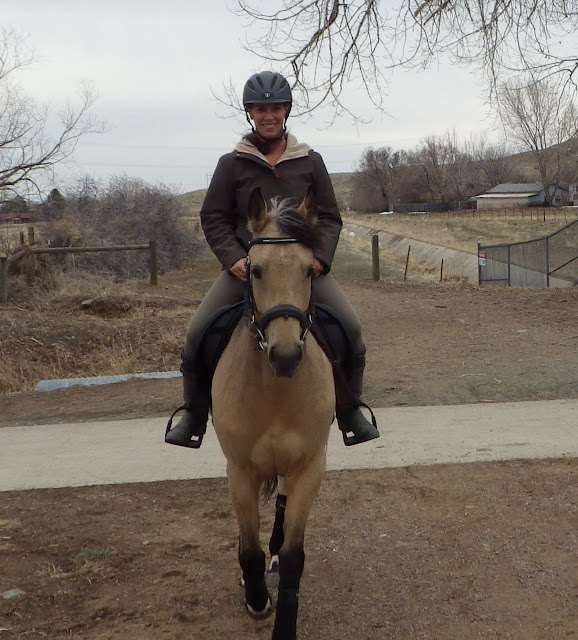 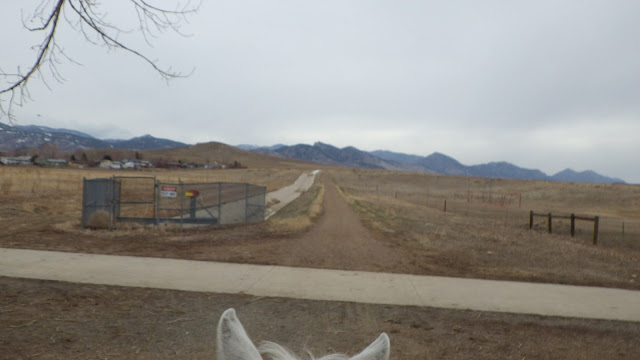 There were several bikers who blazed past us. We are seriously considering having t-shirts made that say "My horse kicks bikes. Approach at your own risk." 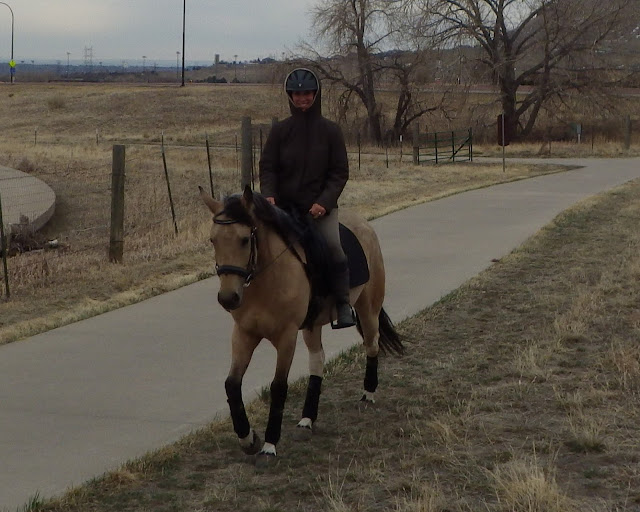 It got cold enough that Nicole put her hood up. 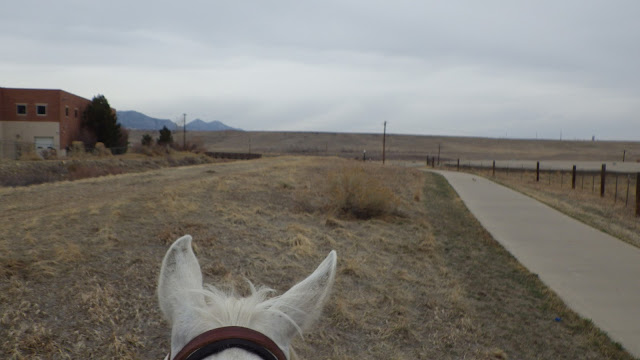 We had four really good spooks. Three of them were by Ashke. 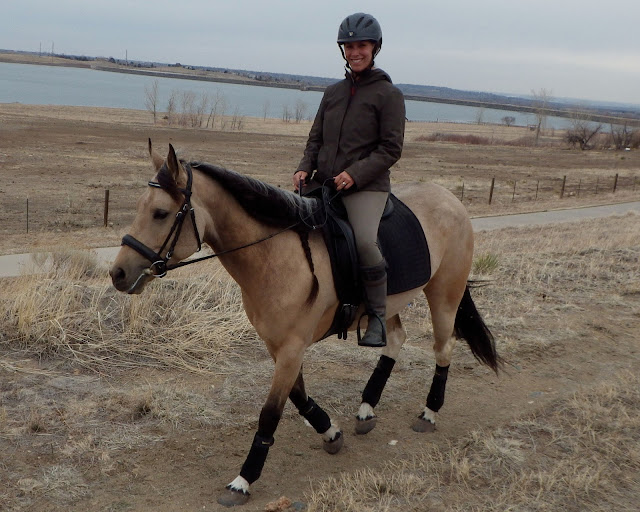 The first was a sewer cover painted blue we had walked past on our way out without a second glance, that was evil incarnate on our way home. Cali walked right up to it, but Ashke took some convincing. 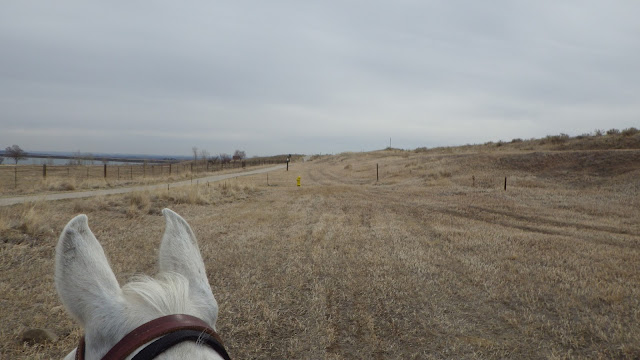 The second spook was at a woman who was jogging up the trail in a bright purple shirt. Ashke stopped with his legs spraddled and tried to back up into Cali. I held him steady. He was quivering when she got close to us and let out a really loud WTF Arabian snort. I busted up laughing. 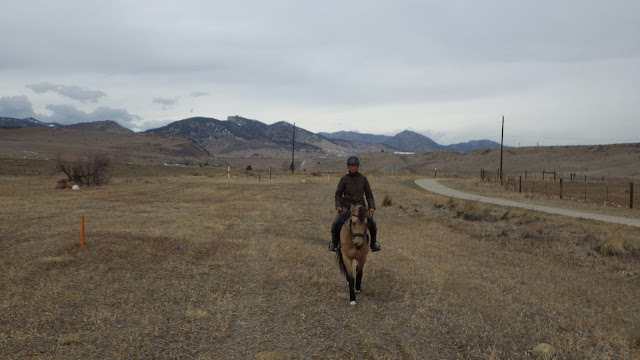 The third spook was Cali at the playground on the way back. A family was there hanging out when we rode past. The guy stood up and grabbed hold of a hanging bar and kind of swung on it. When the bar moved it made a horrible noise and Cali tried to stand on her head and spin to face the playground. I thought Nicole was going to have to get off, but the guy stopped making the noise and we rode on.

The final spook was after we were leading them again. An idiot on a crotch rocket ripped down the street as loudly as he could. Both horses reacted, but Ashke was the one who pinned his ears, swung his rear out and tried to kick him as he rode past. Swear my horse hates motorcycles and ATV's with a passion. Comes from being chased around the field by Steve when he was starving to death.

When we got back to the barn, Miguel had put the squeegee the barn had ordered into our runs. Ashke got 6 buckets and Cali got 10 (front scoop buckets on the tractor). I didn't want it so deep it aggravated Ashke's hamstring. Cali began to eat hers and completely freaked Nicole out. She must have chewed a couple of mouthfuls. Nicole hollered at me and I walked down to see what was happening. Sure enough she was eating it. We could hear her chewing the rocks.

You all know what that means, right? Yup, we were worried about colic.

Nicole was envisioning having to move 10 ton of rock back out of the run by hand, because Miguel would be so angry about having to undo every thing he had already done. After a couple of bites Cali stopped trying to eat it, just moving it around with her nose for a bit and then finally she stopped doing that. I made sure that Jesus and Sherl knew what had happened and to check Cali to make sure she was eating later. Just to be on the safe side. Whitney told Nicole that she would also check on Cali before she left the barn today. I haven't heard anything from Nicole, so I am assuming that everything is okay. 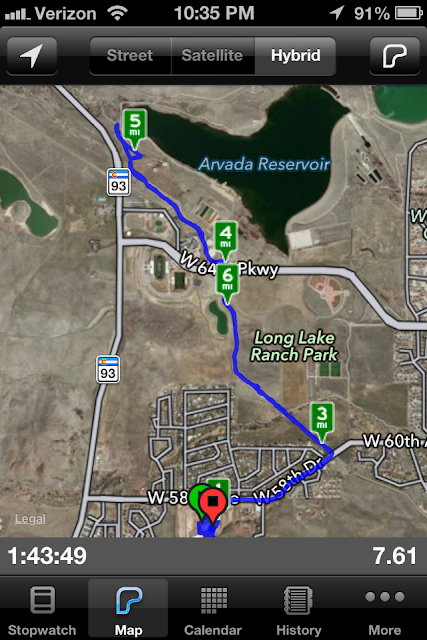 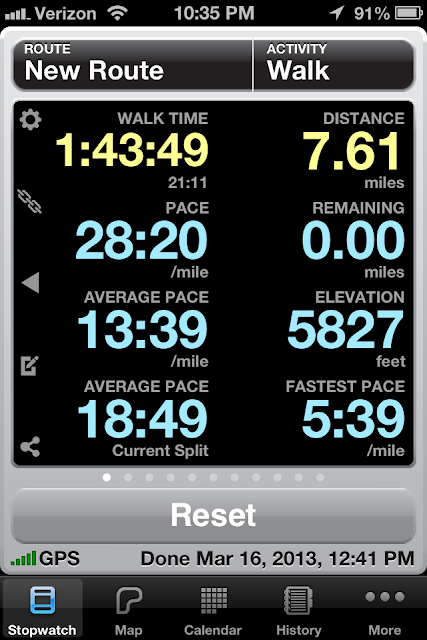 The only bummer on the day was the fact that Ashke was a little tender in his right hind. I keep worrying that he's not going to come right. Nicole said today that if his hind was healed, everything else is good. J keeps telling me that he is sound and will be again. That he wants to complete races. 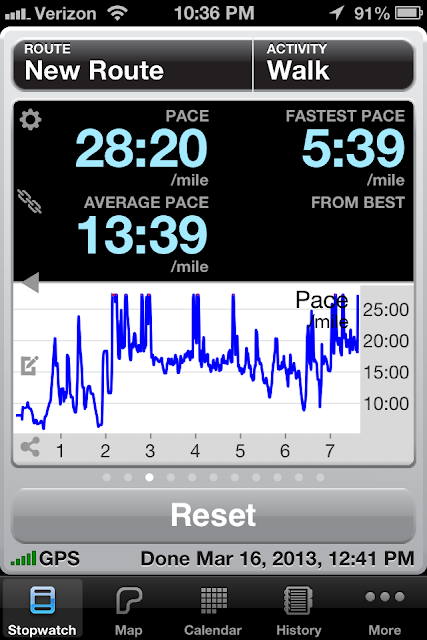 I just have to keep on hoping.
Posted by Cricket at 10:26 PM