Tuesdays are days when I usually work. However, last night Halo 4 was released at midnight. Six months ago I promised T we would go to the midnight release at GameStop. That was last night and we did. It was awesome and exhausting. T has spent all day playing Halo, which I was involved in as well. We had a great time, but by 2 pm I was done and he was involved in online play, so I scooted out to see Ashke.

He was inside the box stall with his head hanging out but unwilling to walk outside. I talked to Samuel about leaving the plastic hung over the fence so he can go in and out. I understand if they need to pull it down at the end of the day, but I asked him to make sure it was moved out of his way in the morning. Samuel said he would and he would make sure Katie and Grace both knew that as well.

I pulled Ashke out of the stall and groomed him. I think I need to find a good conditioner for his mane. Anyway, I also cleaned his feet and messed with the breastplate. I had to shorten the part of the breastplate that runs from his chest to the girth. Ricki thought it was too high and not tight enough. She shortened it but not enough. I had to cut about six more inches off of the end of that part and re-engineer it. I finally got it to fit lower across Ashke's shoulders, and snug from the center of his chest to the girth. It certainly lowered the running martingale, which I need to decide whether or not I want to continue to use it. I also checked his back and he wasn't sore at all. I am very happy that it seems like we've figured out the issue with the saddle.

As I was saddling Ashke, Grace led Callie out to the pasture. I didn't time that very well. Ashke got very loud when he saw her walk by. I took him out to the round pen, mostly because I need to work on verbal commands and secondly because Gary was there. I didn't want to ride near Gary, since it tends to make Ashke nervous. The round pen was open so we went there.

Additionally, I want to work on the canter. I don't feel like I am riding well at the canter. Ashke and I aren't on the same page and I want to make sure we get there. Also, I think working some in the round pen going to the clockwise direction will help Ashke develop the right side of his body. He really struggles to maintain his balance and keep his haunches under him. I would like to think the reason I'm not riding well at the canter is because Ashke needs to develop a smoother canter, but honestly I think it's because I need to redevelop the muscles and balance that made me such a great rider as a kid. Although it is much easier to ride him counter-clockwise because he doesn't struggle as much. I have retaught myself to ride the trot very well, in part because we have done so much trotting. Now it is time for me to teach myself to ride the canter again.

I turned Ashke loose in the round pen and let him tear around in circles around me. Then I swung up onto him. I've also decided I need to get a lot better at getting on from the ground rather than relying on the mounting block. We walked a couple of circuits in each direction, then moved to the trot. I concentrated on tapping him with my heels to get him to raise his back and use his haunches. He did really well, although again he would much rather trot counter-clockwise (CCW) than clockwise (CW). After the trot we worked on moving from the trot to the canter on the correct lead. This is easy and comfortable for him moving CCW. I even settled into the canter and stopped feeling like I was flopping around like a landed fish. I had lengthened my stirrups before my ride and after cantering around the round pen, I got off and shortened them one hole, again. Until I get my ability back, I need them a little shorter. When I got back on I told Ashke if he would do a couple of big circles and a small circle CW at the canter, we would be done. I swear he counted.

I need to figure out how to help him find the correct lead and I need someone watching to tell me if we are on the correct lead. Even in the small circle I'm pretty sure he was on the wrong lead. I think going forward I will work the walk-trot transitions CW and see if we can get him stronger on that side. He is beginning to show some very nice muscle on his shoulder. 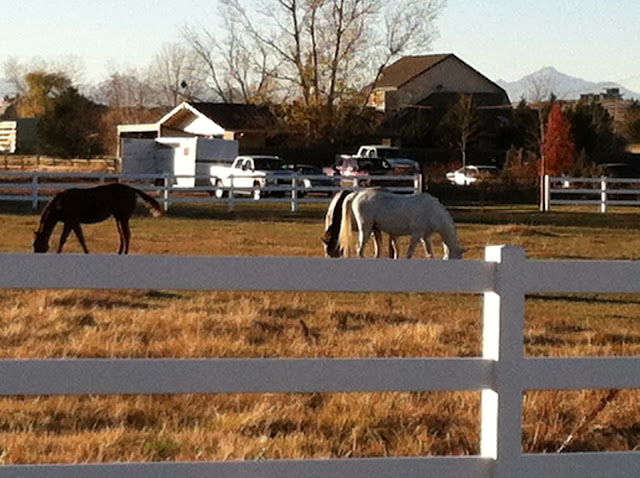 Out with his girls.