Second Trip to the Chiropractor

Today was Ashke's follow-up visit to see Diane. I got up at 5:45 on a Saturday to be at the barn before 7:30 to meet Nicole. Ashke was outside in his run when I got there and Grace hadn't started feeding yet. 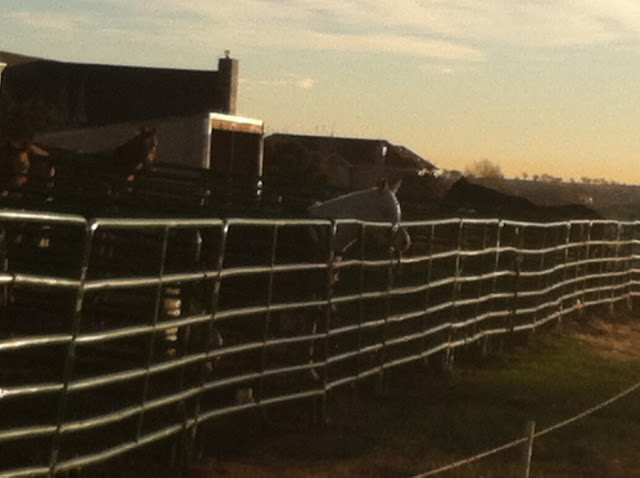 See? It's barely light out.

It was pretty easy to pull him out of his run and brush him down since there wasn't any hay in his feeder. 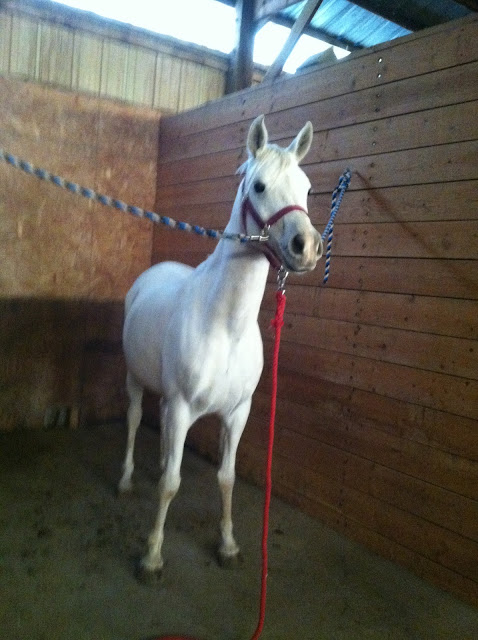 After brushing him off, I took him out to the round pen and let him being a bucking, kicking, running his head off, fool.

I noticed while he was tearing around like a manic, that he was cross-cantering and seemed a little stiff somewhere. At times it looked to me like his back right leg, sometimes it looked like it was the front left.


When Nicole got there I left Ashke tearing around the round pen and helped Nicole hook up. First time was a success. She got Callie out and groomed and then we went to load. Callie was okay, but it took a while for her to finally figure out that Nicole was going to get her way and just accept it. Nicole was patient and consistent. Callie kept trying to shoulder into Nicole and muscle past her. She knew what was expected, she just didn't want to go.

Once Callie was loaded, it was Ashke's turn. I gave him a couple of chances and then grabbed the come along. He hated it. He spent a ton of time and energy kicking out with both back legs. I finally got it on and him moving forward. Once he stopped kicking out and moved away from the pressure, he walked right into the trailer. 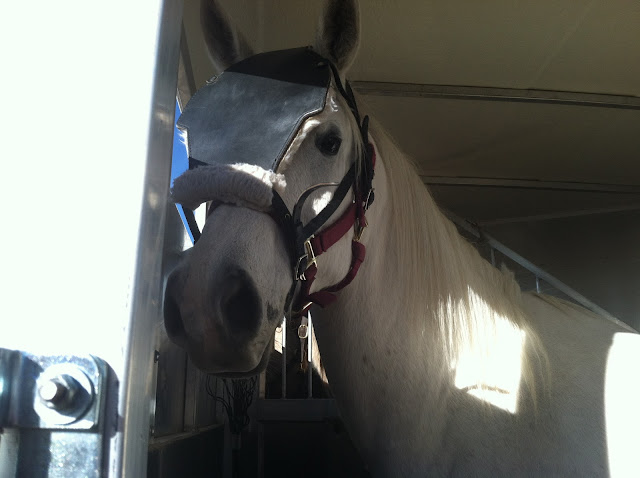 Ashke with his travel helmet inside the trailer.

Nicole and headed East in her truck. Such great company! 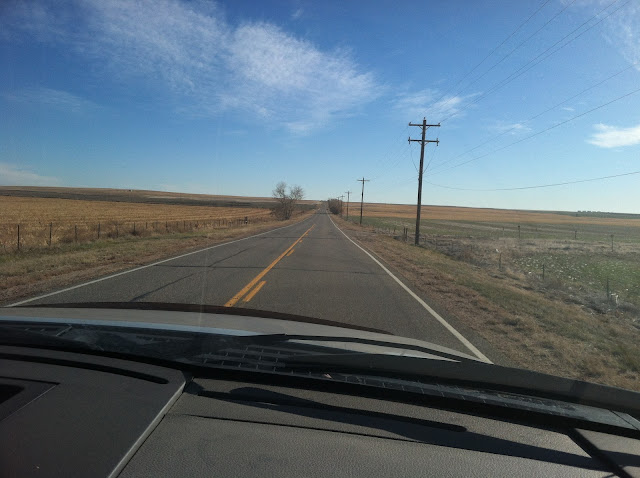 I love the Great Plains. Nicole has a touch of agoraphobia, which J also has. I was really claustrophobic in Boston. Can't see people coming in Boston.

When we reached Diane's, we unloaded and put the ponies in their stalls. This time when Nicole took Callie out to walk and trot her for Diane, I pulled Ashke out with her. He gets really upset when she moves out of sight and I was trying to keep his stress level down. Callie was in great shape. Her adjustment last time had corrected her hip issues and Diane seemed please with her progress. Diane did some acupuncture on Callie, plus the Coggins test, then it was time to look at Ashke.

Diane saw the same hitch in his step that I have been seeing since I first brought him home. She asked me about his movement at the trot and canter. I told her about his cross-cantering and his struggle to do what I ask when I am asking for a leg yield moving on the diagonal from right to left. She had me show her where the muscle cramp was when he cramped up in June. I showed her. I finished the movement test and we went back inside.

Diane told me she thinks Ashke was injured by a fall on his right hip. He is having problems with his hamstring on his back right leg and is hampered when asked to stretch out that leg. He has some scar tissue in the hamstring on the right side. Then Diane completed her evaluation. He is compensating on the left back in order to protect his right side. He also had an issue with his front right because his back left is pulling across his body to his right front. Diane implanted acupuncture needles in his chest and left sacrial area. 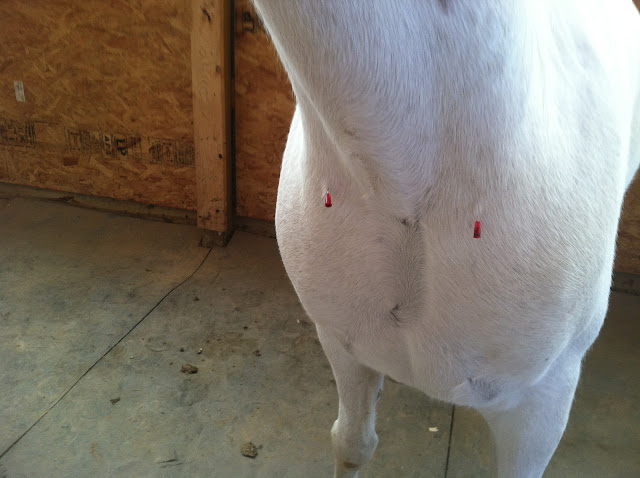 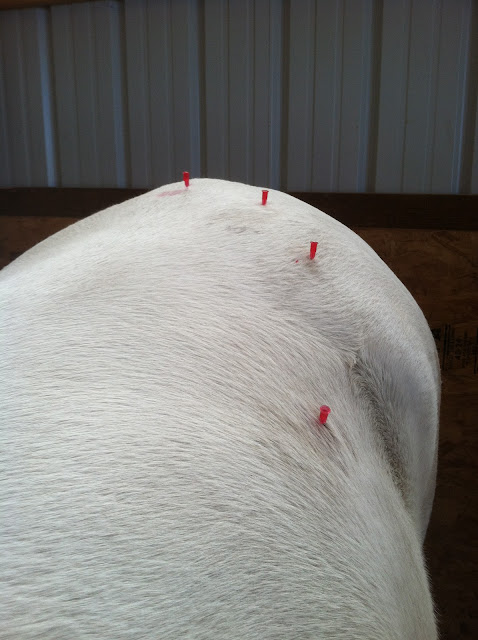 After the needles had pushed themselves out of his body, she did an adjustment. Diane used an Activator on his spine, to move the L6 - L9 back into place. An activator is basically a spring loaded thumping tool with a focused point about the size of my thumb. My chiropractor uses the same type of thing. She then tried to fix his first rib by stretching out his front right leg. It didn't work, so she encouraged him to raise his back to the point where he lifted his withers. That corrected his rib.

Diane also put needles up by his poll to try and loosen his connection between his neck and his head. She said he was really tight and it's a conformation issue for a lot of Arabians. When she pulled the needles out they had bent at a 90 degree angle while they were still in his neck.

I was a little sad at the end of the day. Diane believes Ashke crashed on his right hip at some point in the past. He crashed hard enough to really damage that hip and hamstring. It seems to be focused right where the charley horse was back in June (Diane is positive it was a charley horse and not a tie up.) She thinks it is always going to be an issue and can't really be completely resolved. She said lots of horses have that kind of thing. The things I need to do is 1) warm him up really well before asking him to do more complicated things like cantering, leg yields, small circles, etc., 2) walking him up and down hills will help strengthen the muscles, 3) massage of his right hamstring will help.

Why am I sad? Two reasons. First, it is Ashke's back right, which also effects his front left and explains why I was having such a hard time nailing down which leg he was favoring. His first rib being tied up effects his withers and how he moves out at a walk. Hopefully, that will be resolved now and he won't feel so short in the front. Knowing he crashed down on his right hip combined with the pretty nasty rope burn scar on his right hind pastern leads me to believe someone at some point in his past, wrapped a rope around his leg and pulled him down onto that hip. I could speculate that it was the nasty ass cowboy trainer, but I have no real way of knowing.

Second, there is a really good possibility I won't be able to ride endurance with him. Hamstring injuries are really difficult to rehab and what Diane said to me leads me to believe I can manage it, but it will never really be healed. Which means Ashke may never be completely sound. It is difficult to pass the vet in at an endurance race with an unsound horse. I could see riding for a couple of hours, but not for the time and distance I would need to ride to compete. I think I'm okay with that. I want Ashke as healthy as I know how to get him. I am willing to massage his leg in the hope that it will be better, but I'm not focused on the goal of endurance. I'm focused on getting Ashke healthy.