We are beginning to learn to play horse soccer. Horse soccer is a great thing for Ashke, since it encourages him to stretch his neck down and out to bump the ball with his nose. This helps him lift his back and move his hind legs underneath him. That helps strengthen his back and butt, which is pretty much our entire focus right now. Anything that helps with the strength in his back makes me happy.

We took back the 30" ball, because it didn't fit the cover we bought. Instead, we got the 40" ball, which is a great size for Ashke to play with. It hits him in the middle of the chest. 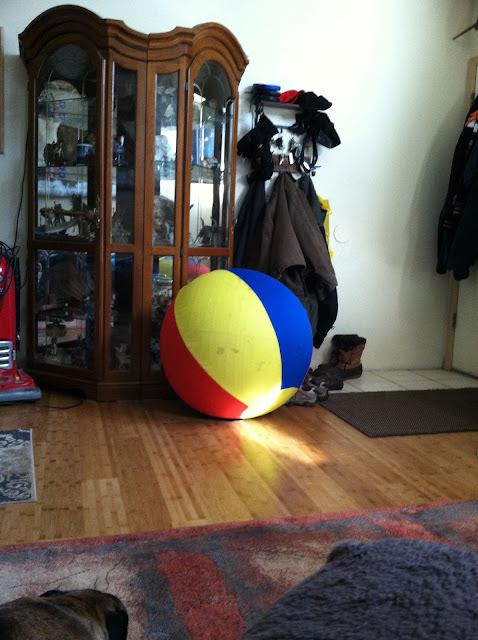 We had to take it to the barn in the truck, because it is too big to fit in the car. It was already dirty because of his playing with it last night. 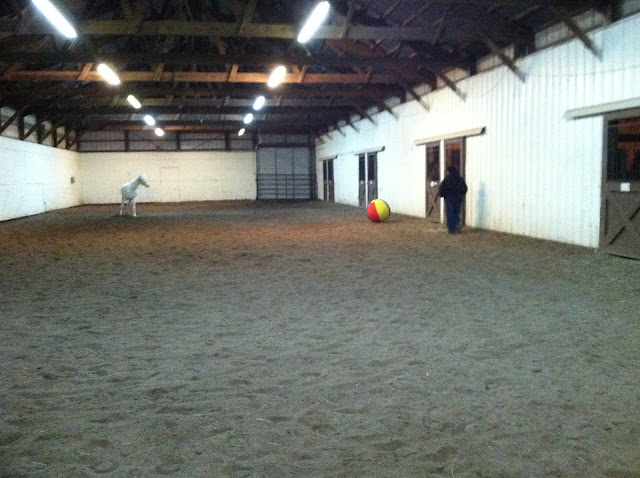 Ashke was excited when he first saw the ball. We stripped the blanket off the boy and brushed him out. He was a little stubborn about his front right foot. He kept yanking it out of my hands. We worked it out after I shouted at him. He hates when he's in trouble. After we were finished, I took him and the ball into the arena.


I'm adding a ton of horse soccer videos. I find them really funny.

I don't understand why he tries to lay on the ball. I can understand him wanting to itch himself on it, but still.

I love how he picks up the ball and flaps it around in his face. So funny to watch his attitude and behavior. Seems like he is enjoying himself.

After Ashke played himself out, I got him saddled. He was edgy so we lunged for a couple of minutes first. Ashke galloped himself around me in both directions until he got it out of his system. Then we did walking and trotting. After he was warm and relaxed we tried some movement on the diagonal. This is difficult for Ashke, but really will help his muscles develop.

Then we did a short canter in both directions after working the serpentine at the trot. Again, all of these exercises were chosen to help him develop the strength he needs to perform and be comfortable. The last thing I want is for him to be sore or uncomfortable.

The work is helping, because he picked up the correct lead going CW in the arena. And he understands the cue when I ask him for that lead. Both of which make me very happy. He still doesn't feel as collected under me when going CW, but he is much stronger and has a better canter in that direction than he did two weeks ago.

And then we brought the ball out. I picked the verbal cue of "bump" to get Ashke to move the ball with either his nose or the front of his legs. He "bumped" the ball both ways.

He figured out pretty quick what I was asking him to do. I was quick with the praise and rewarded him with lots of "good boy" and pats on the neck when he moved the ball.

There was one point when I thought we were going to collapse onto the ball, but I was able to steady him and keep him from falling on the ball. We went up and down the arena a total of four times (2 in each direction). By then it was obvious he was flagging.

I think once he really gets the hang of moving the ball on command, I can work with him on direction. And speed. Most of my riding with the ball was on a fairly loose line. I really wanted him to lower his head and reach for the ball.

After we put the ball away, we did one more circle in each direction. I wanted to make sure he was relaxed and comfortable, since he was a little tied up messing with the ball. Then we were done. We reblanketed him, since it is in the 20's right now and we don't want him cold at all this year. When I took the halter off of him in the stall, he turned and looked at me, then looked at the feed bin. I swear he was asking where his bran mash was. I forgot it. I felt really bad. He loves bran mash a lot. I will remember on Tuesday.