Sunday was a wonderful day. It was warm enough to be out in short sleeves. It was calm enough to ride out off the farm. And Nicole and Pam wanted to ride out at the same time. 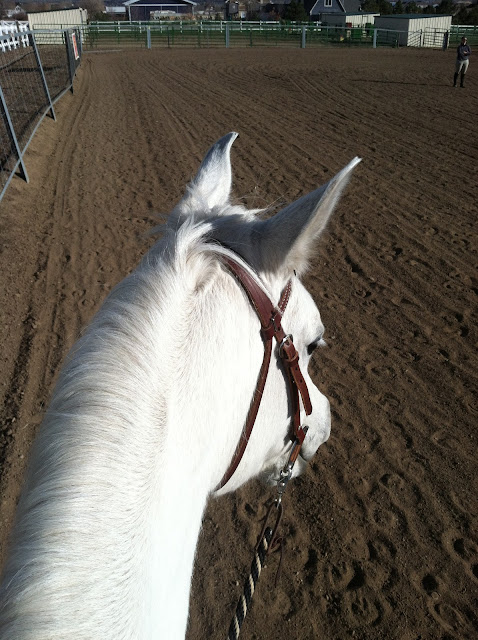 He's so shaggy and a bit spooky on Sunday. It has been quite awhile since we did a trail ride, which I think contributed to his energy and hyper-activity. It was a fun ride and he did pretty good. 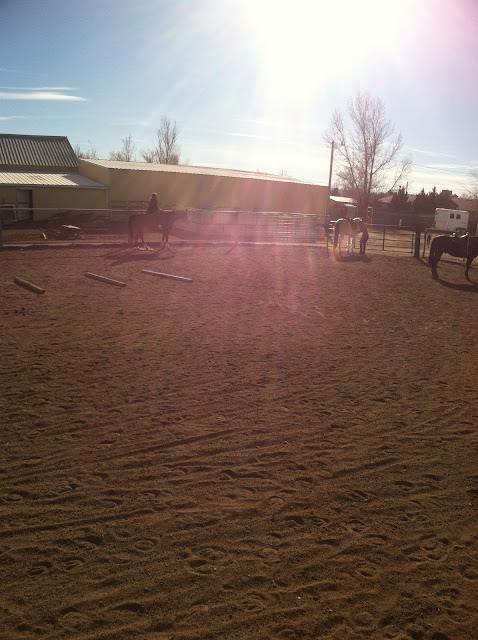 We started in the big arena. There was a woman working her QH/Arab mix who is the twin to Ashke. Same color, same size, but has a QH head and is a mare. The woman had clipped her mare. I asked if she was showing the mare and the woman said no, she just hated her horse having long hair. I then asked if the mare was boarded inside and the woman said no, she blanketed her. I just don't understand. I hate that. I hate the idea that she would strip the mare of her natural protection against the weather for no other reason than she doesn't like long hair. It seems to be the epitome of western thought and behavior where horses are concerned. 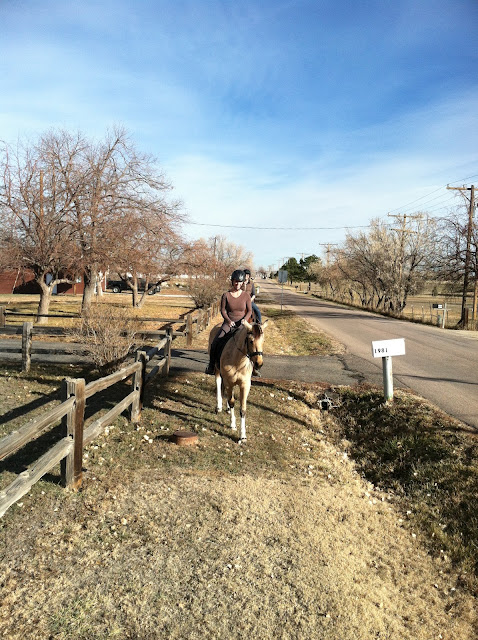 Callie was both backward and forward during our ride. I think she is more comfortable at the trot and she can really out trot Ashke. However, he can out walk any horse we have been out with to date. He has a long, easy, quick stride. And he hates to be in the back of the pack, which we need to work on. I don't want him to think that a trail ride is a race. Unless it is. Callie was a little stocked up in the back legs, although the swelling went down with work and then Nicole iced it with cold water. We are thinking it is due to going without work, or perhaps the bran mash we gave her on Thanksgiving. There is no heat and no tenderness, and it wasn't effecting how she moved, so we went on a gentle ride, ie no cantering. 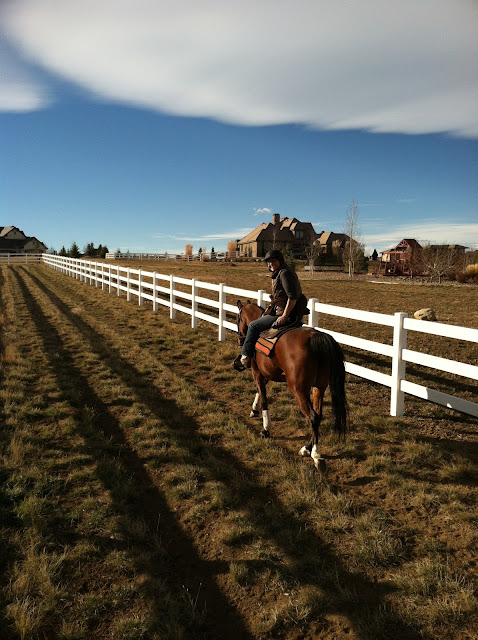 Pam and Allectra did great. Allectra is an awesome horse and really takes good care of Pam. She was the only horse that didn't get testy and Pam even rode with a helmet.

Ashke was very spooky at everything on the ground. He snorted and shied at a napkin. He eyed every electrical box, water main cover, and cable box as if it were hiding a mountain lion behind it. He refused to go past a culvert in the ground surrounded by rocks. He shied, snorting, at a broken piece of pbc sticking out of the ground. Nicole and I both ended up on the ground twice, by choice, since they were both being pretty spooky and tense. This is what happens when you aren't riding out of the arena as much, especially with green horses.

The finale, however, happened on our way home through the green belt. We were on the last stretch behind a shed and thankfully we were walking. I hate to think what would have happened had we been trotting or cantering at that point. A small, ferocious bunny with big icky fangs burst out of the underbrush at Ashke's feet, attempted to attach itself to his jugular, before bounding away toward the shed and safety. Ashke went up and sideways four feet at least. Then tried to bolt. I, amazingly, stayed on him and wrestled him to a stop. Callie, who was walking behind Ashke, went backwards about three feet and Nicole stayed on only because she grapped the top of Callie's bridle to steady herself. The bunny hopped away unmolested. Allectra didn't even flinch and just kept walking. We had to ask Pam to stop and wait for us. Nicole got down and walked for a bit, before getting back up. Have I mentioned that Ashke hates bunnies, cats and really small children. They completely freak him out. 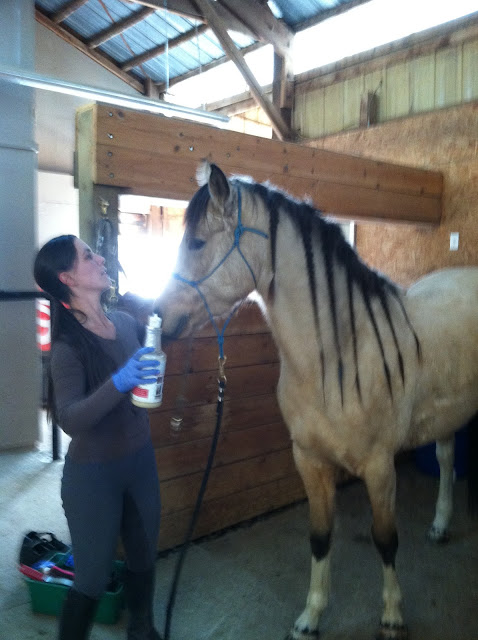 The rest of the ride was uneventful. 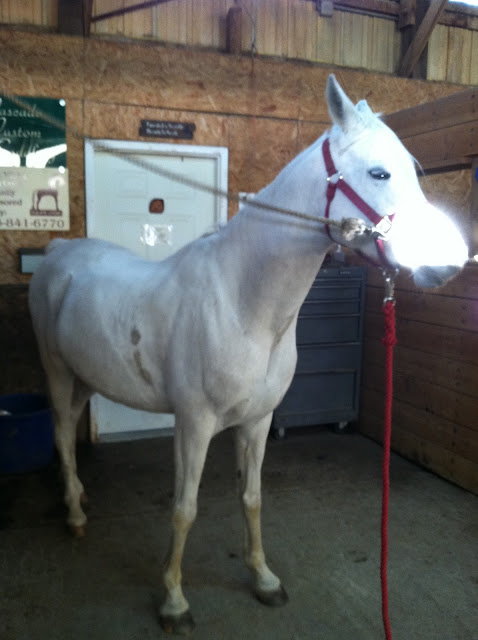 See the muscle in his shoulder and chest. And how strong his neck has gotten? No soreness from the saddle or our ride. He was only sweaty around the girth and the bridle behind his ears. 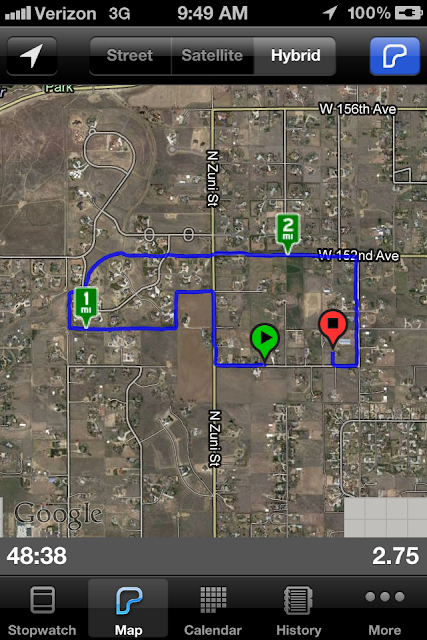 We rode almost three miles in just about an hour. I really need to remember to turn the app on when we first get on the horses and I also need to remember to bring my phone holder that attaches to my belt. Trying to get the phone in and out of my pockets sucked. I don't know if I am happy or sad that this was probably our last trail ride at Christensen's. I think more happy, not so much sad, only because the facilities at TMR are so nice and I can't wait to try them out.
Nicole is freaked out about coyotes and rattlesnakes. Me, not so much. I think that's a west thing. I would probably be freaked out by the idea of timber rattlers in the east, which I know they have because I used to watch the Crocodile Hunter all the time. Boy, do I miss Steve Irvin. ﻿
Posted by Cricket at 10:18 AM