Today Ashke moved into his new run. He is situated between Allectra and Sonny. And he seemed pretty happy to be able to move outside into the sun at will.

He didn't, however, like the heavy plastic curtain between indoor and outdoor. 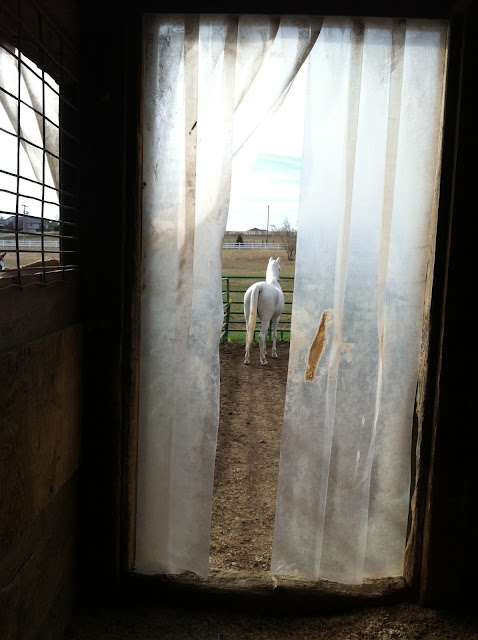 Ashke at the end of the run looking over his panel at the pasture. He seemed so happy to have horses on either side of him. And Sonny, who is known for fighting, tolerated him without any issues. 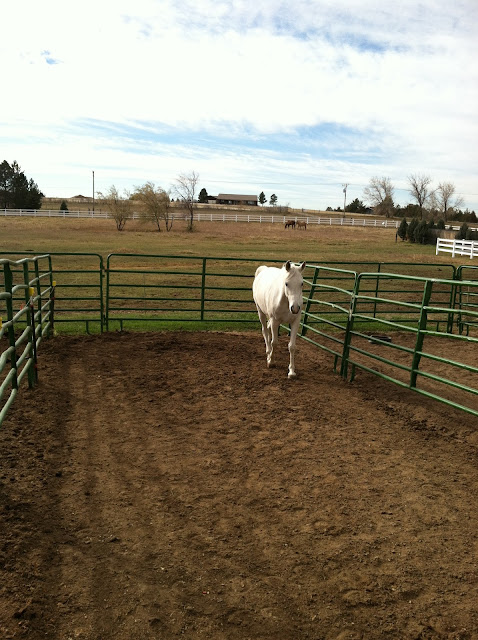 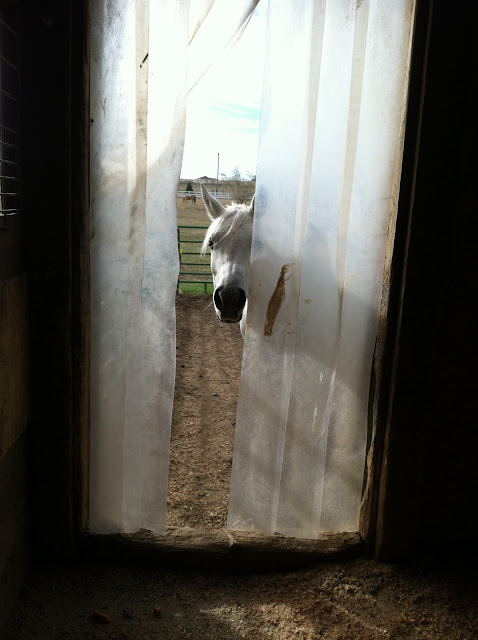 He was wide eyed and snorty at the plastic and wasn't exactly excited about stepping through to me. 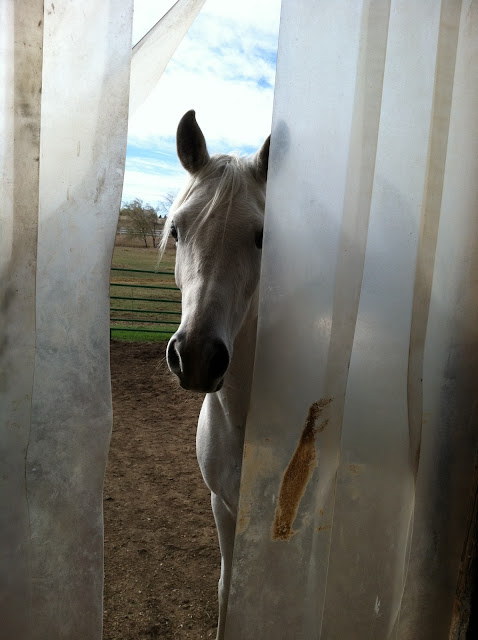 Not even tempted with sweet talking and the offer of carrots. 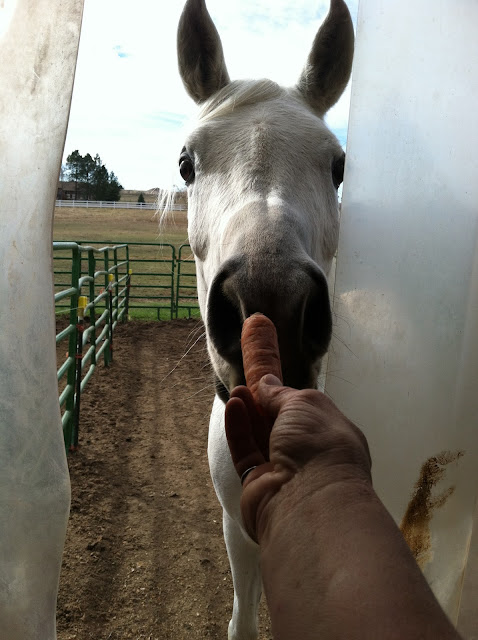 Come closer Mom! If I get too close the plastic will eat me. 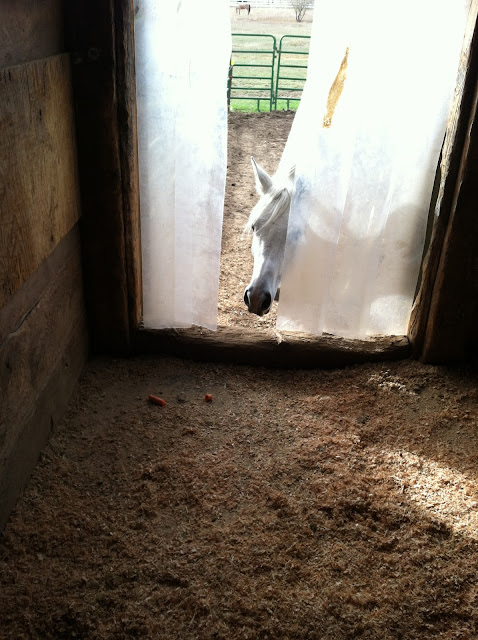 Carrots on the ground six inches away caused him to whicker and beg, but he wouldn't step forward. 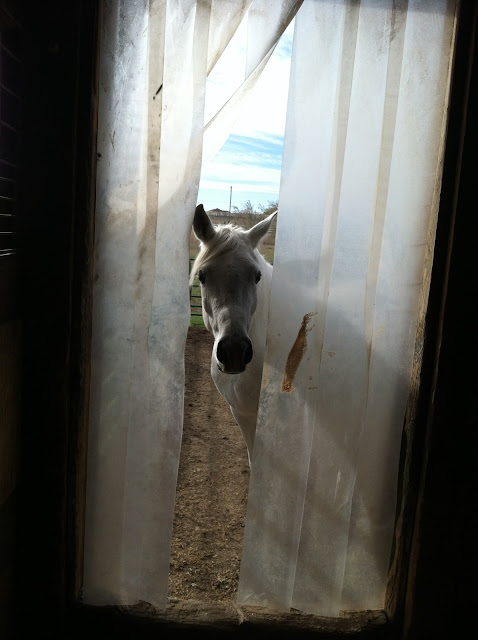 Mom, you can't really be serious. 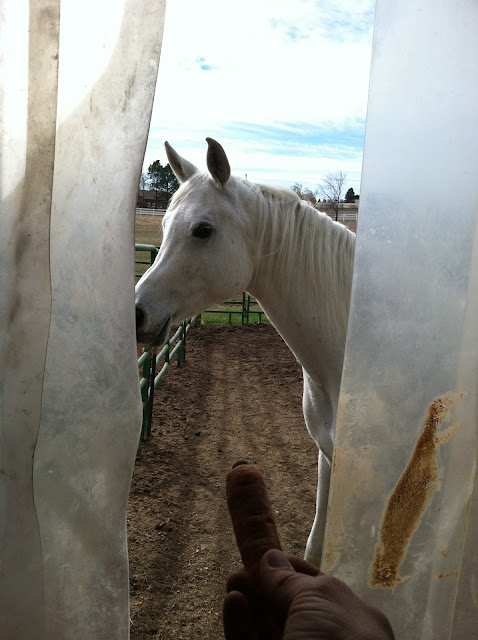 I ended up picking up the carrots and feeding them to him.

So, we somewhat resolved the plastic issue by taking about half and flipping it over the edge of the fence. This gave him half of the doorway plastic free. He was still spooky, but at least he would walk in and out without panic. We waited and coaxed and just hung out for about an hour this morning, making sure he was settled in okay. And then we left for the day. I had decided to rest his back and let him settle in, since Nicole and I are riding tomorrow.

After we left the barn we took the long way to Down Under Saddlery. Rickie, the salesperson who helped us the first time, recognized me when we walked in. I explained to her what was happening with the saddle and Ashke's back. She asked lots of questions and then refluffed the saddle padding. She moved it away from the part of the saddle where it is applying pressure to other parts of the saddle. It was easy to see on the saddle blanket where the pressure was. Rickie explained that by moving the padding around, it should relieve the pressure on his back. She also shortened the strap on the breast plate that fastens to the girth, because I've had it too high. She had to take almost six inches off to give me enough room for adjustment. I hope this works, because the thought of having to buy another saddle fills me with despair.

We went back out at six or so and Ashke was happily eating his head off in his stall. I put the plastic back down to help trap the heat and keep out the wind. I also put his blanket on him to help keep him warm tonight. Tomorrow morning I will be back out to ride with Nicole and to check on him. I checked his back when I was out there and he wasn't sensitive to my touch. Hopefully, his back is getting stronger and tomorrow the saddle will be fixed.