Nicole (Sundance) and I (Butch - because I had the worse freaking haircut of my life on Friday so I have to be Butch) went for a ride today.

I went out to the stable about 10:30 and moved some of the plastic strips out of the way and walked Ashke back and forth through the doorway until Ashke was comfortable going in and out. He really doesn't like the plastic brushing his ears. I guess it took Grace, Marit, and Anita to get Ashke to walk back into the stall yesterday when Grace was trying to take him out to the field. Samuel (the guy that works for Grace, cleaning the stalls, upkeep, maintenance, etc.) told me he loved how I worked with Ashke. That I was very patient and calm. I just figure upsetting Ashke isn't going to help anything.

Nicole got to the barn about 10:45 and we got tacked up. I decided to move my stuff up to the front tack room, since Ashke is right there and I am lazy. I put the saddle on him and tested it the same way Diane did. It felt a lot better. I made sure it was up over his withers and then tightened the breast piece and girth before letting Ashke walk off. He wasn't nearly as cinchy as he has been the past couple of times I put the saddle on him. Then I took him out and rode him a bit in the big arena. (Callie and Sundance were arguing in the round pen - which amused me to no end - but in the end, Sundance was successful.) I discovered while riding, that my posture was much better, with my heels beneath me in line with my hip and shoulder. With the saddle adjustment, it feels like it completely changed my riding position and Ashke seemed to enjoy it too. He walked out very nicely.

Once we were ready to go,  we headed out and turned right on 149th. When we were almost to Zuni, Ashke got very antsy. His neck was very tight and he was dancing. It felt like he was going to start rearing on me. I got very tense and uptight about his bouncing. Then Nicole started talking to me about what I needed to do. Listening to her broke me out of feeling like I was beginning to lose control. I turned Ashke in a circle to the left and then again to the right. Finally, he was able to walk forward (and stay at a walk) without jigging up and down. Nicole reminded me to breathe. I did and made my shoulders relax. From then on, Ashke was perfect. We still had some issues, but I didn't feel like he was being unsafe.

When we got to Zuni, we turned North and rode up to the opening to the horse trails. Turning west we stopped and both of us took off our sweatshirts. Nicole pointed out that I need to pick a different sweatshirt, since she was able to unzip hers and skin it off, while I had to take off my helmet to get mine off. She was right, it wasn't the smartest choice. Trying to do that on horseback is sort of like trying to take the sweatshirt off while driving. I had to take my helmet off to get the sweatshirt off. Next time I will make a smarter choice. I also realized I hadn't turned on my ride tracker, so I did it while we were waiting. So, I will post the map at the end of this post and that is where the map starts.

We did some trotting up the slight hill once we were moving west on the horse trail. We jogged south and then turned west again. That was when Ashke got silly. He didn't want to go forward. He backed up. I let him and then asked him to move forward. We did that a couple of times. Nicole asked if I needed to get off and I told her that I thought he would go forward if I was persistent. I was right. He moved forward the third time, although he did try to duck out to the right. I applied some leg to his right side and tapped him on the shoulder with the bat. He went forward and Callie followed. And then. . . 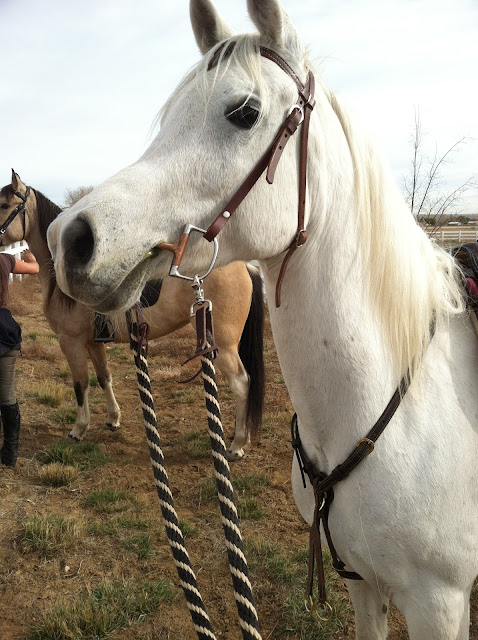 This is Ashke's WTF face. 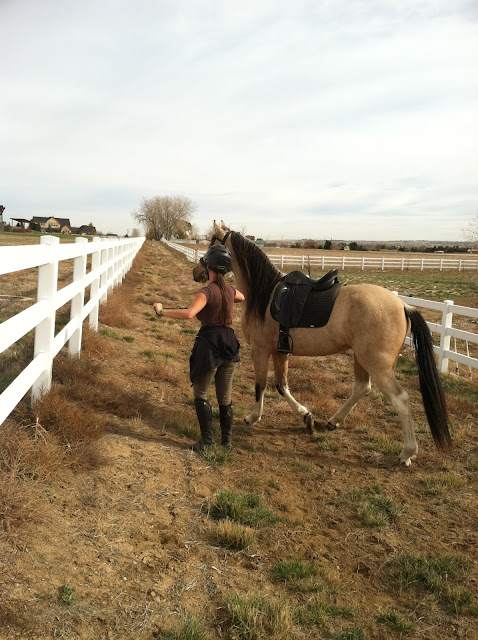 This is Callie's WTF is that behavior.

Nicole and I wisely got off both of them. Which was a great idea since they were both snorting, dancing and acting up because of this: 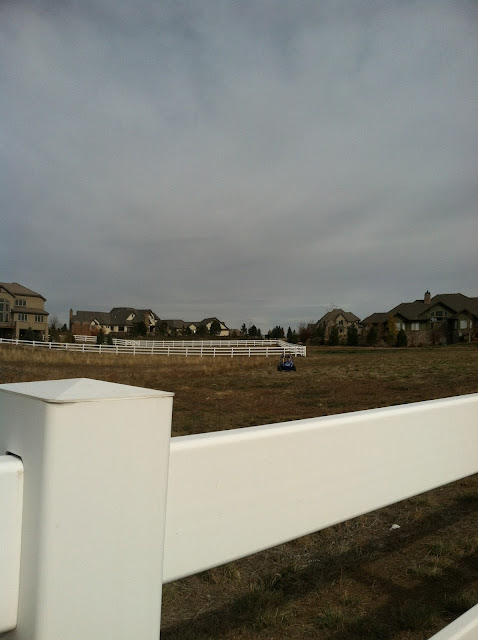 Freaking Dune Buggy for some kid's birthday party. Both horses lost their minds when it came close. We hand walked them for quite a while. The house was huge, with a swimming pool and big playground. And a freaking dune buggy! 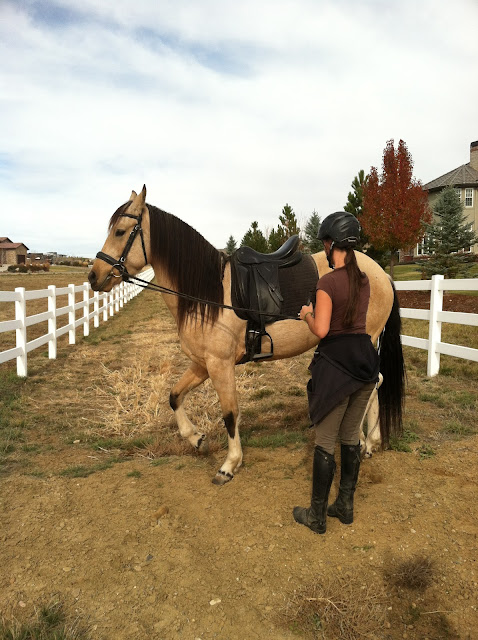 Callie still not sure she trusts the fence to keep the Dune Buggy away. 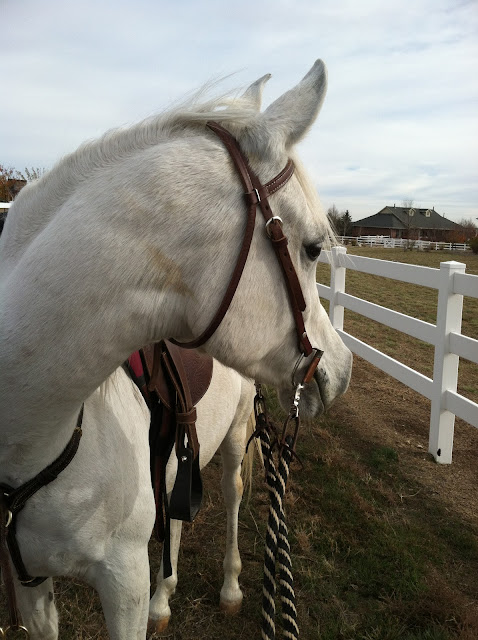 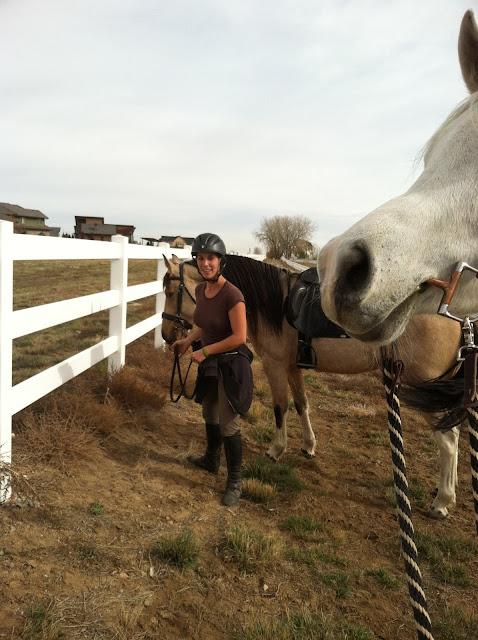 Nicole and I discussing the darn dune buggy.

We got back on after a bit of a walk, which is never my favorite thing to do because lifting my ass into the saddle at 50 is much more difficult than throwing my body onto my horse at 16. Getting older sucks! Anyway, we rode north to the canal. We turned right and followed the canal to Sheridan Parkway. There was a walk through that went under the bridge and Nicole thought it would be fun (as in the educational type of fun for the horses) if we went under the bridge. I dismounted, because I know Ashke is more willing to walk into hell if I am walking in front of him. Nicole thought she would try to ride through, but Callie just got to tight and so she dismounted too. As we were almost at the end, Nicole asked me what the hell was on the top of the walls of the passage way. I looked up and almost had a heart attack, thinking it was wasp nests. Once we were out, I went back in for pictures and realized it was cliff swallow nests. 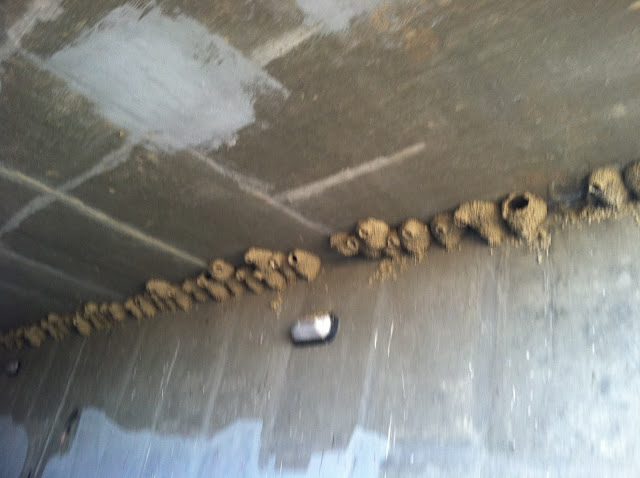 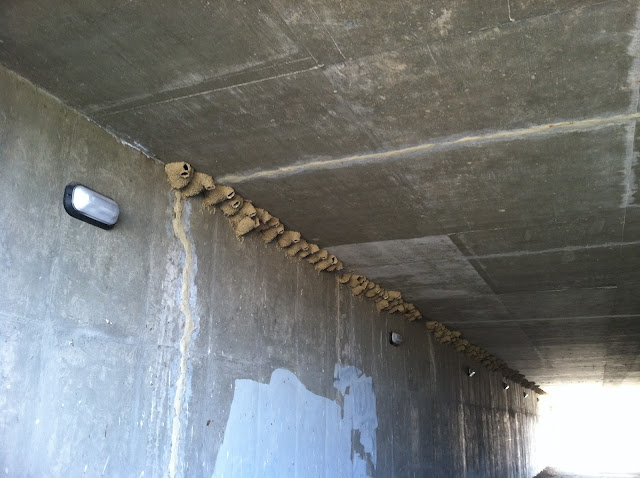 When I was a kid we had a mated pair of barn swallows who built a nest on our front porch every year. The nests are really cool and I'll beat it's a treat to watch the flock of them fly out all together. 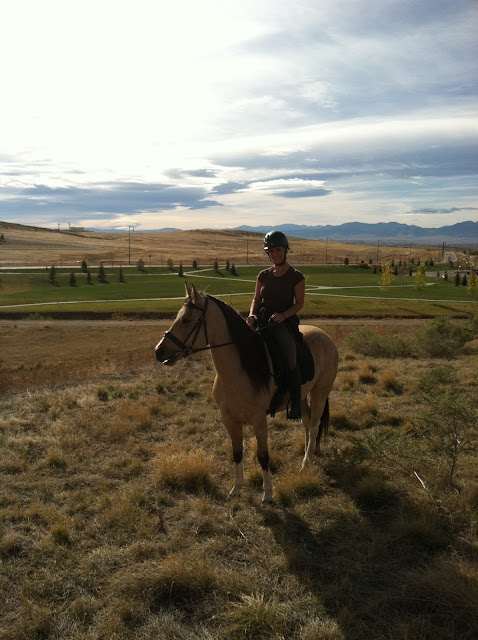 Don't they look like they are having a great time?

On the far side of Sheridan Parkway, there was a hill covered with huge sagebrush. We opted to ride up the hill and thread our way through the brush. Nicole thought it was great because she could use her legs to ask Callie to move around them. I loved it because it resonated with something very deep inside. I love the high prairie more than I can say. 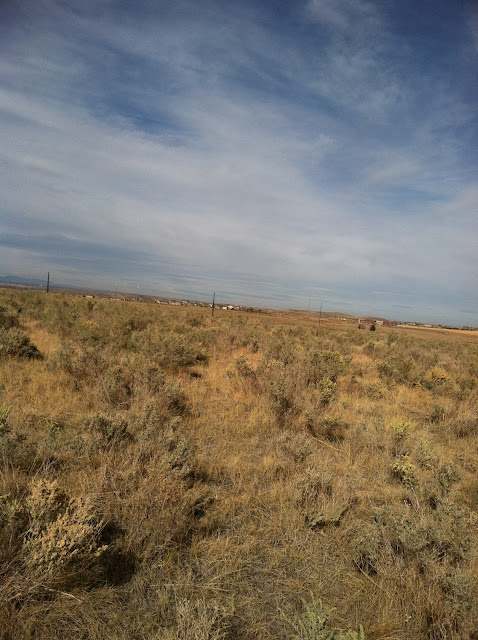 At that point we turned around and started home. Callie was feeling really good, so we cantered most of the way from Sheridan Parkway to the area where we could turn east for the barn. Maybe a third of a mile. Ashke wasn't handling Callie behind him very well, so Nicole moved up next to us and we tried again. Ashke thought that Callie being in front of him meant it was a race. I was nervous about the canal next to us and Callie pinning her ears at Ashke and sending him sideways. We had a bit of a tussle and I think Ashke ended up spiking himself in the mouth. We moved back down to a trot. When we turned east again, Callie picked up the canter and we followed right up to the point where Callie suddenly went sideways with Nicole. I slowed Ashke to a trot, because I didn't want Ashke suddenly going sideways. There was a scary water access hole there that could have been a horse eater. From there we walked the rest of the way. 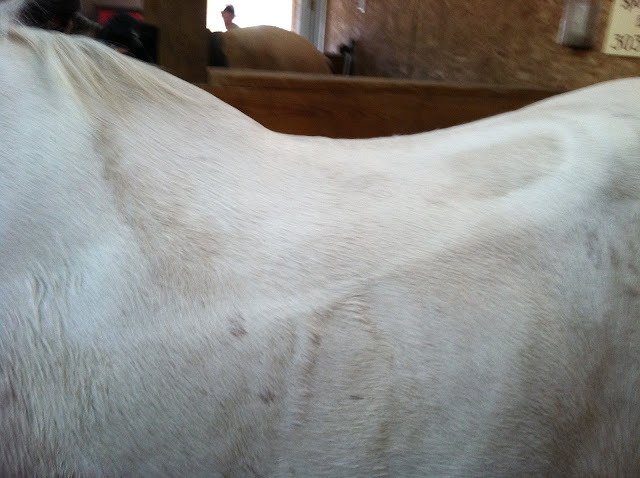 This is what Ashke's back looked like after I took the saddle off. The pressure pattern is much better. Ashke wasn't sensitive to my touch. I gave him a bit of a massage on both sides of his back, which he seemed to enjoy. Then he went back into his run. 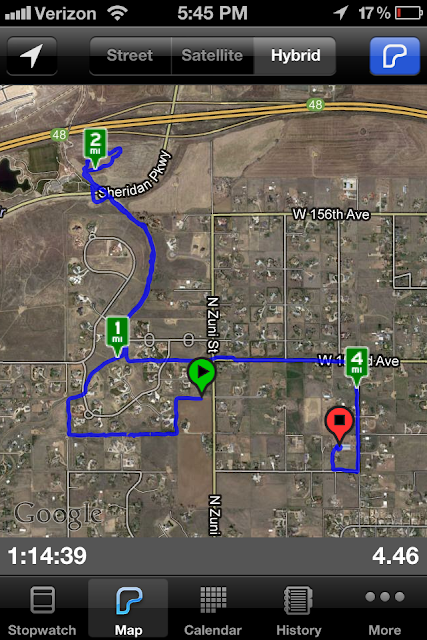 I need to add .75 of a mile and 30 minutes of riding time to this record, since I forgot to start the timer when we started the ride. So, five and a half miles in just under two hours. Not bad for where they are right now. 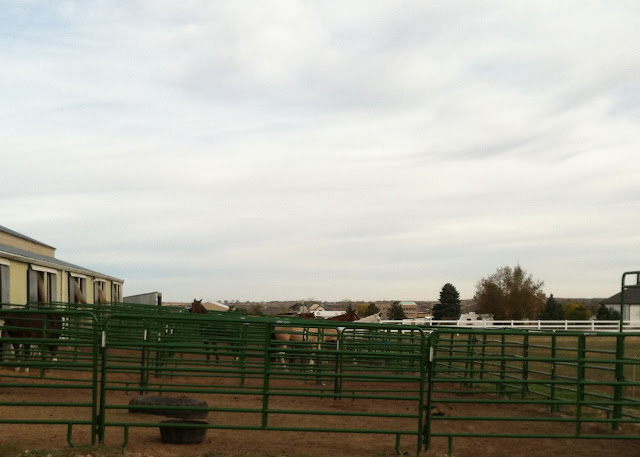 Ashke looking out at the pasture horses. Callie is the dun in the foreground.

I must say Sundance (Nicole) is a lot of fun to ride with. She is adventurous but safe at the same time. Her intervention at the beginning of the ride saved Ashke and I a lot of pain and suffering. She also seems to enjoy riding out with me and Ashke. It's nice that both horses are at about the same place as far as training goes, since that puts us both on the same page with our ponies. Callie was a lot more bushed when she got home, but both Nicole and I think that's more mental than actually physically tired. She's still a baby. Ashke was tired, but not stumbling tired.

Next time, we have to pack a lunch. I have saddlebags we can throw stuff into and Nicole really needs a hydration pack. We seem to always ride over lunch. Go figure.