One of the things that was pretty obvious when I brought Ashke home was that his feet were not in great shape. He was long in the toe, with no break over, and his first trim showed us signs of blood in his laminae. He was fairly tender on his front feet, so I had shoes put on him for two trim cycles, but the balance on his feet was so bad, he clipped his front heels with his back feet at the trot and canter. The second trim cycle, I asked the farrier to address the fact that he was clipping himself, and the farrier unbalanced his feet, which made him sore. I had his shoes pulled on the next trim and then we moved barns. Once we were at TMR, I found a barefoot trimmer and had her come out.

From the beginning, M got him better balanced and began addressing the flairs in his feet. He also had white line disease, which was never really addressed. She trimmed him for two years and in that time, Ashke was sound, if a little tender on sharp rocks. Unfortunately, the hay was not the best quality and although he was on supplements, it wasn't enough to ensure his diet was as good as it could have been. 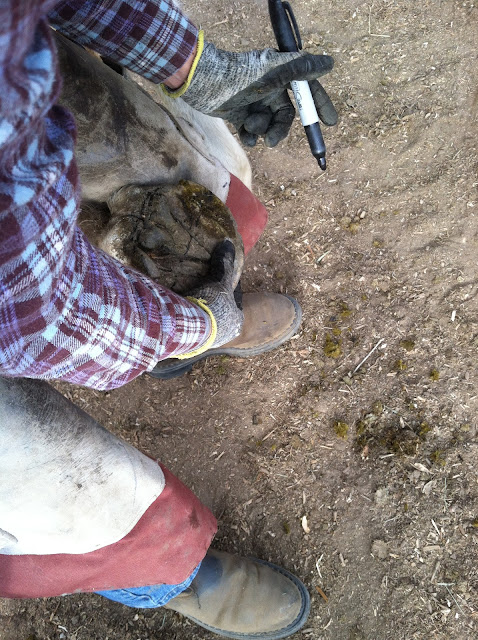 From the beginning, M worked on pulling his toe back and giving him a solid mustang roll. 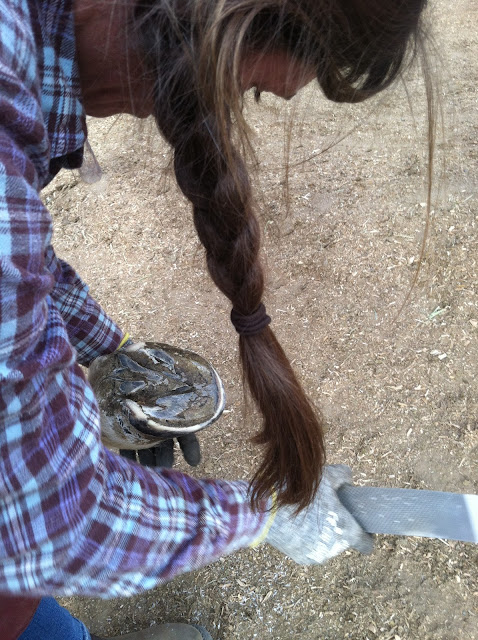 He was high on the inside and his heels, but low on the outside. 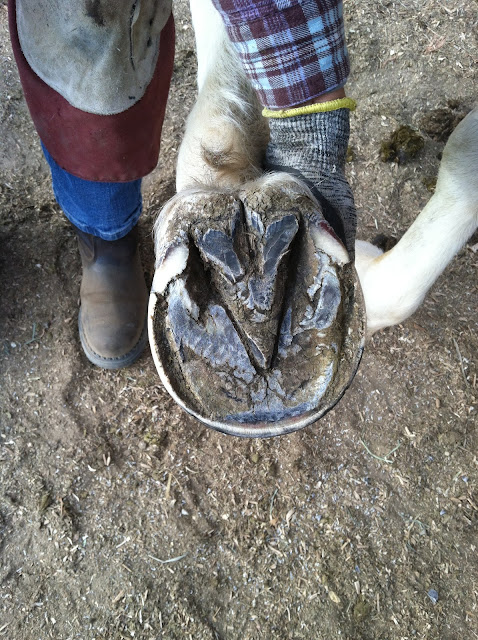 You can see where his white line looked bad all the way around. 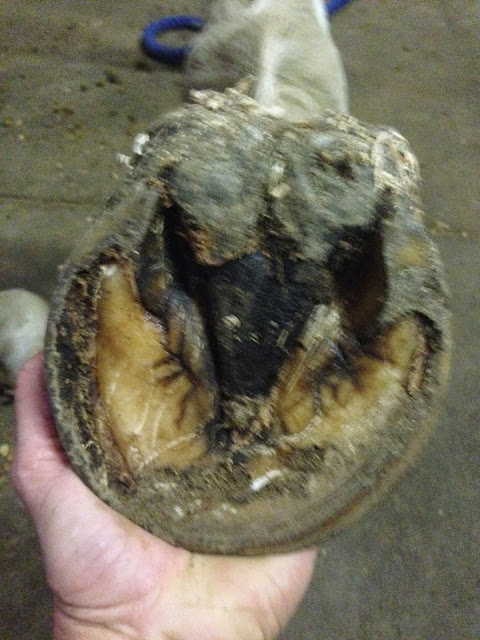 Not the best looking hoof. 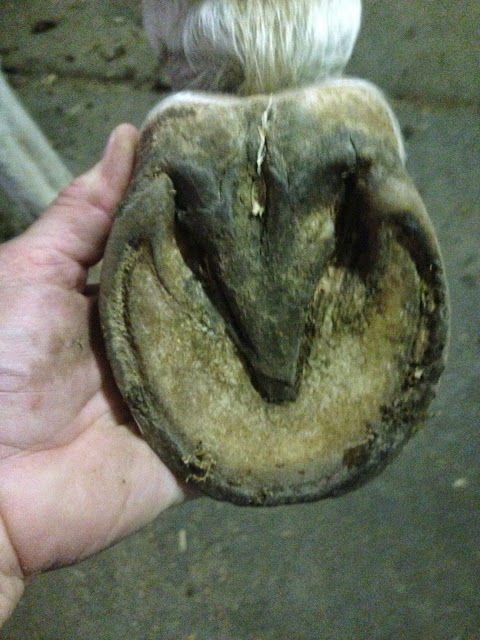 With barefoot comes the need for hoof boots. I had seven pairs of hoof boots, the Easy Glove Trails, the Backcountry, regular Easygloves in sizes ranging from 00 to 1. Ashke hated them. HATED. They changed the way he moved, they slipped on his hooves and made him feel unsteady, they encouraged him to drop his foot toe first when he walked and neither of us felt comfortable riding in them. Plus, any tiny bit of water and the boot would come off. Any tighter of a boot and they rubbed his heel bulbs. I tried for almost four solid years and probably spent at least $1500 on hoof boots to no avail. 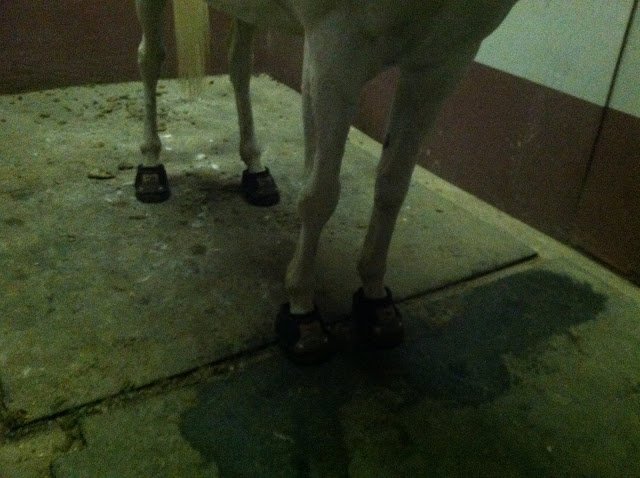 I so wanted them to work.

When M stopped doing farrier work, she sent a guy named Ben to take over her clients. I hated the way he trimmed Ashke, and from the very first trim, Ashke was sore. So sore I had someone else come out and trim him. That farrier was very worried about how short Ashke's hoof length was, how thin his soles were, and the possibility of him remaining sound. I decided that Ben was not going to be a good fit for us and started looking elsewhere. I found a certified farrier to come out and do barefoot trimming, which was one of the worse decisions I've made, but there was no way to know a head of time how bad he would turn out to be.

His method of trimming was to rasp the bottom of the foot flat and that was it. There was no addressing the flares that were happening on either side of the hoof on his front feet, nor the deepening crevasses being created where the white line should be. I was communicating with Saiph at the time, both via the blog and also via text, trying to make sense of what I was seeing. 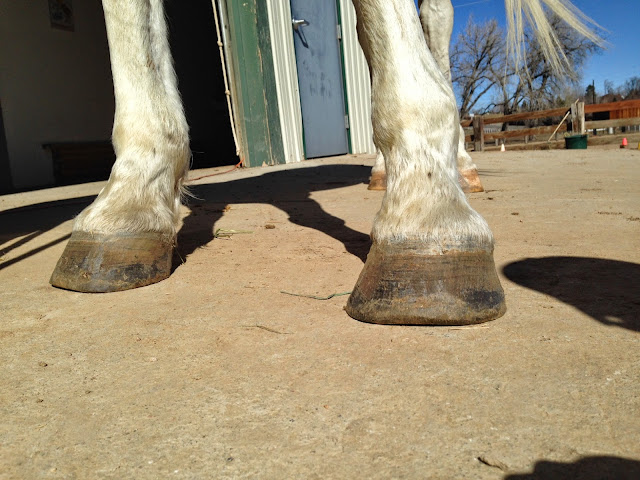 They were becoming rectangle. And the flares just kept getting wider. 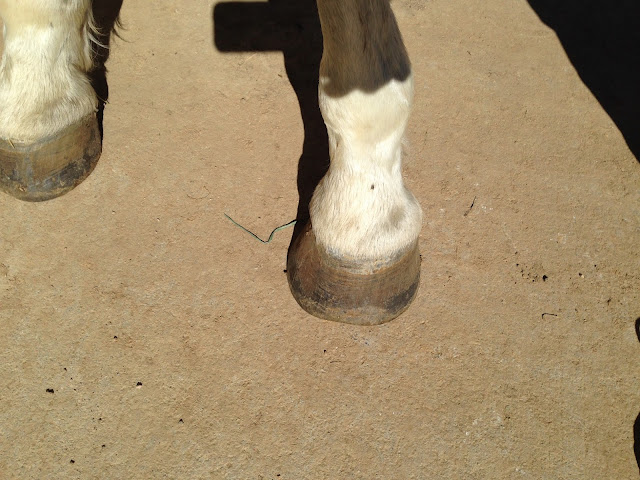 He was very sore on his fronts and very stumbly when he moved. 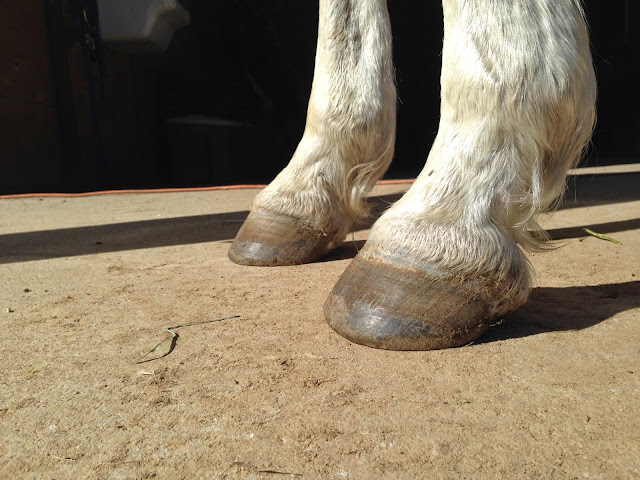 There was also ridging in the hoof wall from Ashke's diet.

By this time, I had left TMR and moved to Silver Quarter Acres, where part of their feed program included fresh grown barley. They said that they had their hay tested, but I never saw the analysis and from the way Ashke was struggling to hold weight even on six flakes of alfalfa a day, I'm not sure it was really great hay. I wanted to love the idea of fresh barley grass twice a day, but every time he went on it he got ridging in his hoof wall and his tenderness would increase. I struggled with his diet, the farrier and the footing, which was mostly mud eight months out of the year (the barn was in a flood zone).  During that time, Dr D saw Ashke and told me to call her farrier (I had tried before moving to Dan) and have her take a look at Ashke's feet. 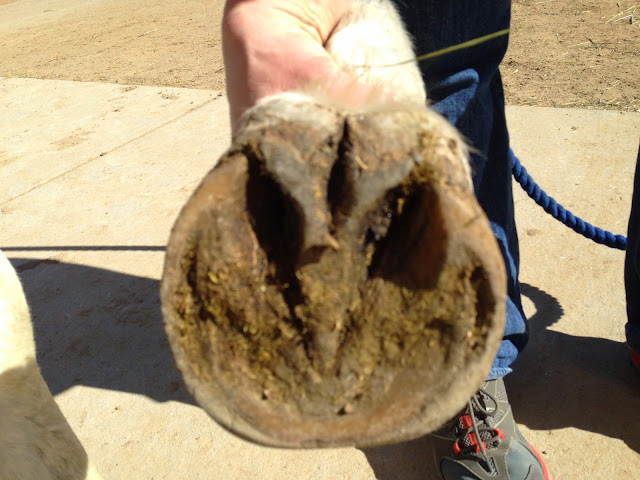 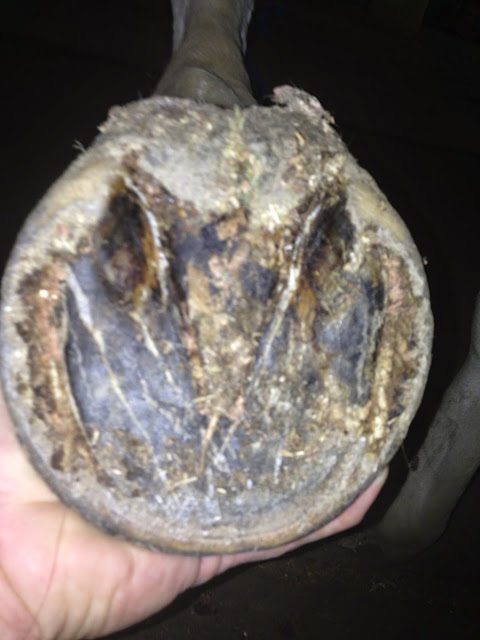 Better after K trimmed it 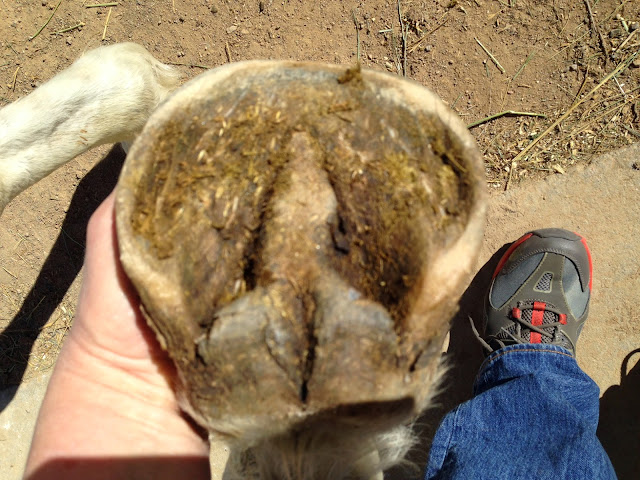 No real wonder he was lame 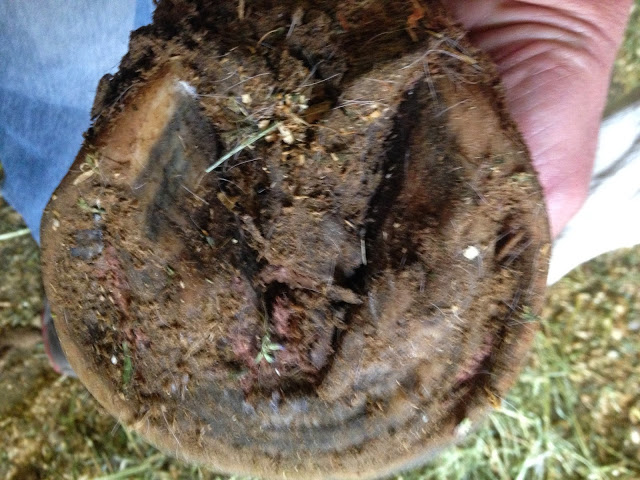 Thick, heavy bars and no solid breakover.
Lots of separation between wall and laminae 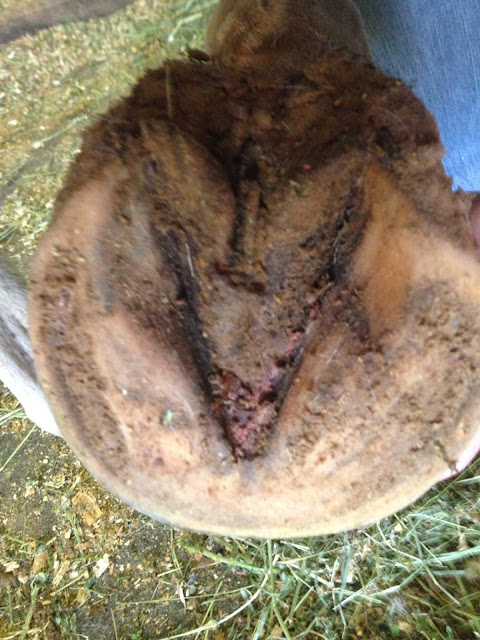 You can see where the outside of the hood was starting to crack and separate from the length. 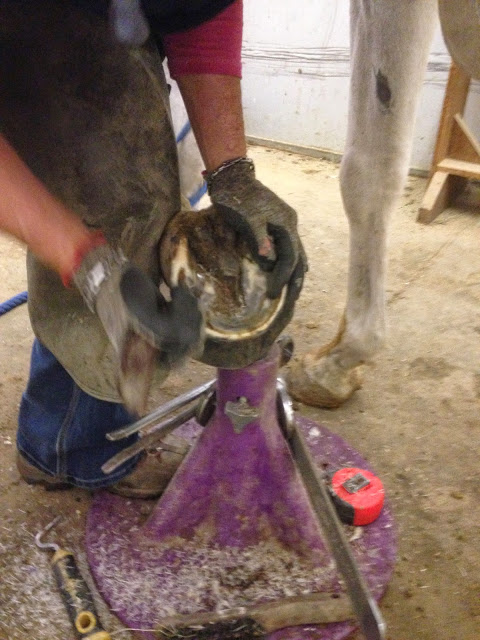 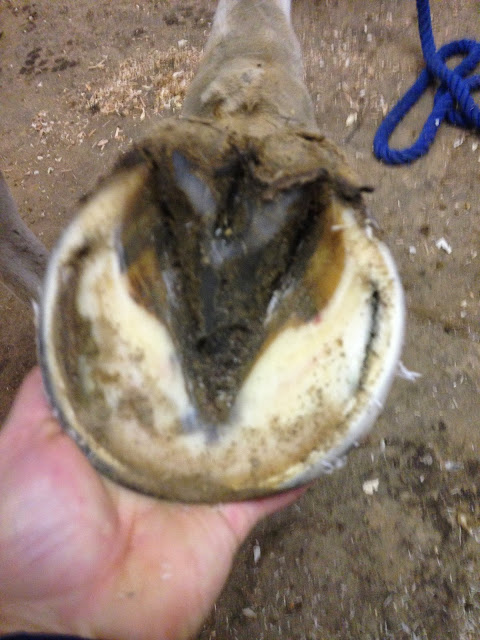 
By December of 2015, we had moved to Morelli Ranch. K had been trimming Ashke for about six months, but we were still struggling to keep him completely sound and to get his feet in a better place. The consistent good quality feed he was getting began to show in his feet and hoof wall, but he was still sore a lot of the time. I was also struggling with the whole boot fiasco and often started a trail ride with hoof boots on and finished the ride with the boots in my saddle bags. Then in April of 2016, Ashke degloved his left hind leg and we didn't ride much for seven or eight months. The quality of his hoof got better, but the length of his hoof capsule remained short, and his soles thin.

By the time we started riding again, I was done with the boot struggle. It just wasn't working for us and Ashke had told me over and over that he HATED the boots with a passion. I set aside principals and what I wanted, and talked to K about shoes. She put them on the fronts, and within a few hours he pulled one off. She reset them again. While he had them on, we went to see Dr D and she said he was moving so much better in them that maybe he needed the extra support. Then she suggested I get them put on all four feet. I did and he promptly twisted another one. K was just learning how to put shoes on, and she was struggling with Ashke, so she turned us over to Trey.

I love Trey. He really worked with Ashke and I to figure out what Ashke needed. We had to keep bell boots on for about four months, but after that, Ashke had figured out via our dressage lessons, how to keep his feet from interfering with each other. Trey has us on a six week cycle and Ashke's feet look better and better each trim. There are no ridges and his hoof capsule has gotten longer. He no longer trips over his toes, he no longer drags his hind toes, and we finally addressed the white line disease.

We tried White Lightning twice. It didn't work. The third trim cycle, I soaked his feet in iodine mixed with hydrogen peroxide. Just enough to cover the bottom inch of his hoof. I did two soaks per hoof about a week apart and that did the trick. Trey said that the squishy parts of his laminae are dried out and we should be to healthy, hale tissue on his next set of shoes. His flares are being kept in line, with his hoof staying tighter and tighter with each trim and the best part is he is completely sound. (Knock on all of the wood.) He goes so great in the shoes and I no longer worry he is going to trip or slip on the ground. Plus, how easy is it to swing up on him and ride off down the trail and no have to worry about whether his boots are going to fling off or if he was going to be sore.

One of the things that Ashke said to the communicator was that I was the first person who wasn't in a rush, and who was willing to do whatever I needed to in order for him to be sound and healthy. There were times when I really despaired about Ashke being both sound and healthy, that I almost gave up. But here we are. And it is a product of all of the things: a barn that feeds really high quality hay in good quantities, a great farrier who takes his time to make sure Ashke's feet are done correctly, a great vet who listens to both Ashke and myself and addresses his needs on both a physical and spiritual level. And I have to also acknowledge that I was willing to put aside what I wanted (barefoot) and do what the horse needed. He needed shoes and putting them on him was one of the best decisions I've made.