For NaBloPoMo I am going to use the alphabet for prompts: each blog post will start with a word that begins with the next letter of the alphabet. Today is the first day, so we are going with A.

Although the title is appetite, what we are really talking about is what Ashke gets for food every day. From the time I brought him home til moving into the barn we are at now, I have struggled to get and keep Ashke at a good weight. I want him somewhere between 5 and 5.5 on his body score, which has taken some management to attain. It makes me so happy that we seem to have found exactly what he needs to maintain his weight, keep his muscle, and remain sound. Some of that has been body management (chiro, accu, myofacial release, shoes) but a lot of it has been what he is given to eat on any given day.

Ashke starts his day out with three flakes of hay in his slow feeder bag (I love, love, love slow feeder bags) two of which are alfalfa and one is grass hay. Then he goes out into turn out, where he hangs with a mare friend (or by himself with friends over the fence) and munches on free feed grass hay. That lasts for two hours every day. After turn out, he gets his supplements in his bucket (about noon) and then about four he gets his final hay bag of the day, with two more flakes of alfalfa and a flake of grass. 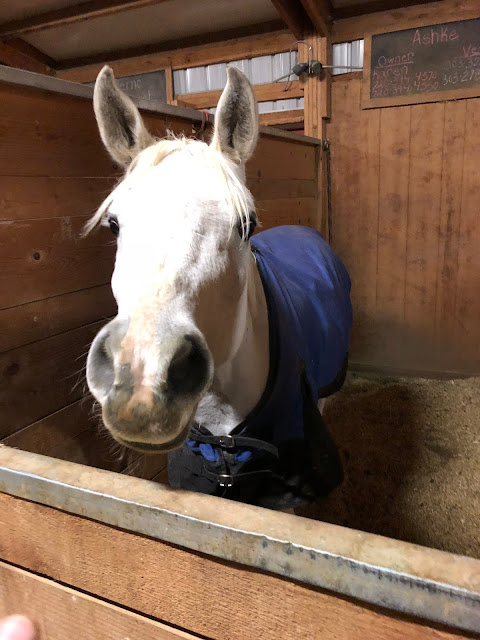 The hay our barn feeds is the best they can find and all of the horses in the stable look amazing, even those who came to the barn with chronic low weight issues. Even all of the TBs have a bit of padding on their bones and good muscle. I know a lot of people shy away from alfalfa, but I am really sold on the muscle it builds when fed in good quality hay. I believe the feed as also really helped with the issues I've been struggling with for the past five years in terms of Ashke's feet. I'll go into that journey in five days when we get to the F prompt.

In addition to the great hay he gets, Ashke gets a noon feed of supplements and TC Senior every day. The supplements are a combination of Smartpak (because easy), Equipride and for one week a month, sand clear. In the Smartpak is their SmartFlex Rehab Pellets, SmartLytes Pellets (electrolytes) and Tri-Amino. The rehab pellets are for joint support and inflammation management, the lytes were added in July when he refused to eat the powdered part of his bucket due to the salt I was adding, but he was still acting lethargic and out of energy. The Lytes have helped with both of those issues. And the Tri-Amino powder is a combination of lysine (we've been on this pretty consistently for five years), methionine and threonine.These are the amino acids needed for building muscle and the lysine also helps with stress management. 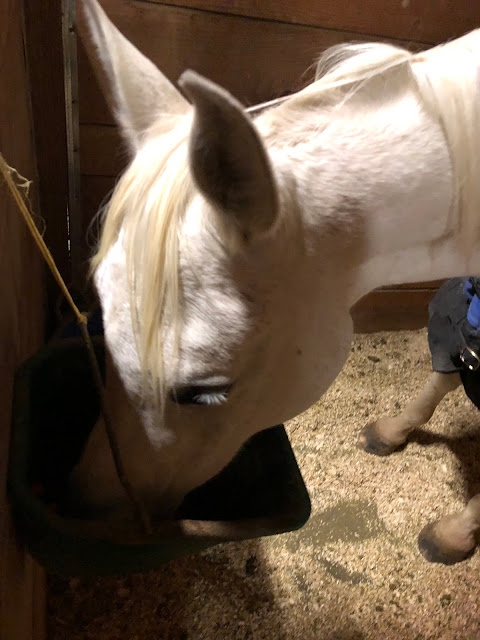 He and T remind me a lot of each other. Food is very motivating.

On the nights that I ride, he gets a feed at the end of the ride. It is usually a couple of pounds of TC Senior and about a pound of cut up carrots. He gets some of the carrot pieces on our way to the tie rack and the rest when we are done with our ride. I like to reward him for his effort and he likes being able to make nasty faces and flip his head at his neighbor while he is eating. He is very, very clear that I am his and the treats are for him. I could have a second feeding set up for him on the nights when I don't ride, but he really doesn't need it to maintain his weight and it would be really hard for the barn to handle knowing when I was coming out. I prefer to be the bearer of the yummy goodness when I am there. 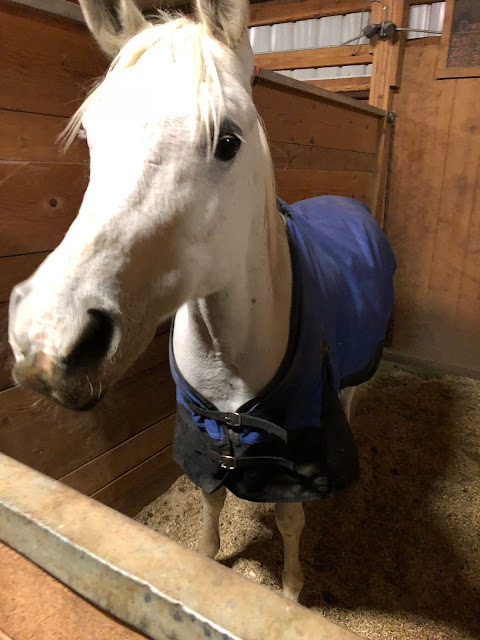