Cats have been a part of my life for as long as I can remember. My first kitten was a Siamese so small I had to bottle feed it with rubber nipples on glass doll bottles. Her name was Tinkerbell and I was six. She would follow me around the house and sleep curled up against my neck on my pillow. One morning I got up and she was gone. She had had an accident in the house, which pissed off my father and he had thrown her out the front door in a fit of rage. She broke her back on the porch steps and so he killed her so she wouldn't suffer. It was my first experience with death.

We also had Smokey, a grizzled old grey tabby that lived outside and hunted mice in the graineries and fields. He would show up at the house for love and affection every other week or so. He was sweet but not really an indoor cat. We had him for almost ten years. He eventually perished of a harvester while hunting mice in the wheat field out back.

When I moved out on my own, I got a small little grey kitten who learned to live on my shoulders. She would perch there when I got home and stay there through taking a bath, changing my clothes, eating my meals and then going to sleep. She chirped and purred and talked to me all of the time. She was such a sweet cat and my boon companion. Unfortunately, I had to rehome her when I lost my job and moved. She went to a friend who kept her for the rest of her life.

When I lived in California, I shared an apartment with two other people. We ended up getting two cats - a grey tabby and an orange tabby - and we named the grey tabby Lynx and the orange tabby Jonesy (after the orange cat in Aliens). Lynx was a sweetheart snuggle bug and Jonesy was active and playful. He would chase balls of paper and bring them back to you, or leap four feet in the air to catch the paper ball in a game of keep away, purring madly all the time. Once, in our apartment, one of my roomates attached a piece of rope to the ceiling fan. Jonesy was on top of a wooden bookshelf and reached out to snag the flying string, pulling him off of the bookshelf, which he brought with him, to crash down on the dining room table.

They lived with us for two years in California and when I moved to Colorado they came with me. Jonesy was an indoor/outdoor cat who liked to prowl. He was hit by a car in our neighborhood about a year after I moved to Colorado. I took him to the vet who diagnosed him with a broken femur, and although he was a good candidate for surgery, I was struggling to survive on 3.35 an hour and had about five dollars a month to cover gas and food every month (thank goodness I was working in food service and could eat there for free or I would have starved to death). I signed the paperwork to have him PTS and forked over $105 dollars of money I didn't have to have him euthanized. I went home and bawled because being poor sucks. Lynx and I loved on each other and I spent extra time with her until she was no longer crying for her brother.

Six weeks later, the vets office called and told me I could come get my cat. The doctor had been so moved by my sorrow at losing Jonesy, he had fixed him anyway and when he was sure the surgery had been successful, had called me to come get him. I brought him home, but things were never the same after that. His relationship with Lynx was damaged and they fought constantly. He lost any interest in being connected to us and I ended up finding a home for him with a mom and her eight year old son where he became the king of the roost and the terror of the dogs in the neighborhood. Lynx lived to be fourteen.

J and I had Preacher and Taz, both of whom have blog posts on here, if you want to look them up. 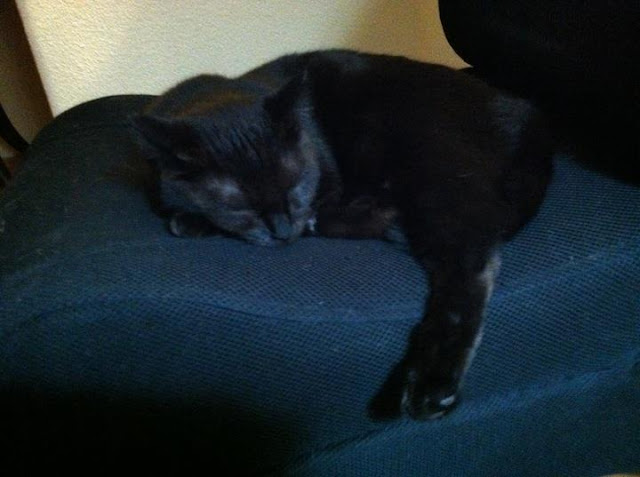 Istazi or Stazi (most frequently) is Lakota for Yellow Eyes. She came to us from the bottom of a dumpster so small she fit in the hollow of my hand with her eyes still closed. Our neighbor had found her and asked us to help identify whether it was a girl or a boy. When we found out they had planned on taking her to a shelter, we brought her home. She has been J's ever since, although she has grown found of me. 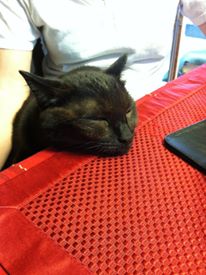 Being our animal is hard work.
Ask any of them. 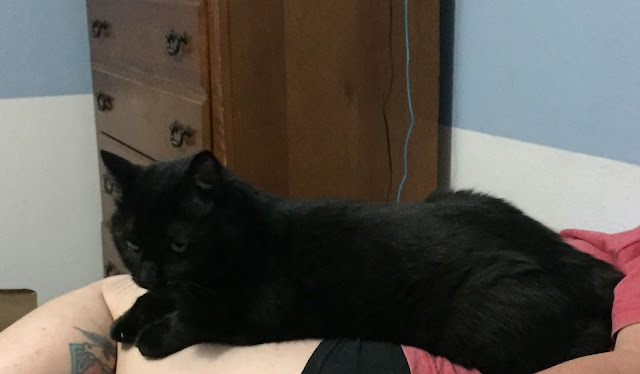 She has taken to laying on me at night. Her most favorite position is curled up over my crossed legs, half in my lap and half on the bed, however, she is willing to be daring if I am not being cooperative. She weighs about 3 lbs and we've struggled with immune issues ever since she went in for her spay surgery. She is very vocal and absolutely loves to tease Lily. Lily is her dog and sometimes she comes downstairs to find her. 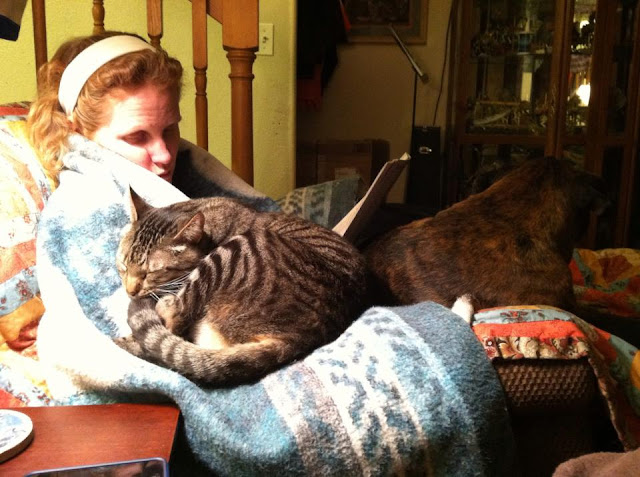 He has white feet with black pads. He also has a nasal tumor and has taken to spraying the basement walls of our condo. He now lives in our powder room, with a fan, his own heater and a cat tower. He is fourteen or fifteen and will spend the rest of his life living in that room. T spends time with him daily, as do J and I. He is sweet and very affectionate, although he is also apt to sneeze thick snot all over your face without warning. He is close to 20 pounds in weight and fairly tall at the shoulder. 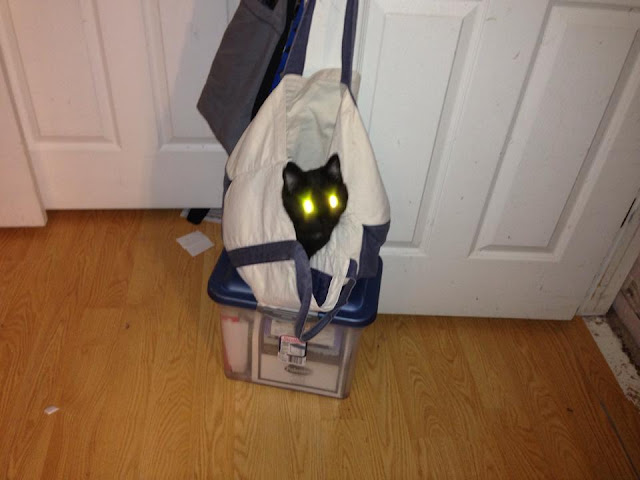 Some of them may be demon possessed. Lily shares the same trait. 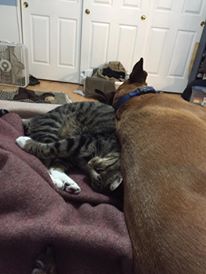 He just got along with everyone.

The barn, like all barns, had a orange tabby when I first moved in who was the worse mouser in the history of cats. The mice were so brazen they would walk in front of him and he would ignore them. They were wreaking havoc on blankets, chewing through tack boxes, racing across the tops of the wooden rails and basically living as though cats did not exist. Our barn owner brought home two feral boy cats (barn born) to help curb this issue. They have done a good job, although they mostly live at the top of the hay stack in the barn and only come out at night, since they are still fairly terrified of humans. However, they had begun leaving pieces of mice for the BO to find, so we knew they were doing their job.

Then we got a cat that knows her job and takes it very seriously: Bella the Mighty Mouser 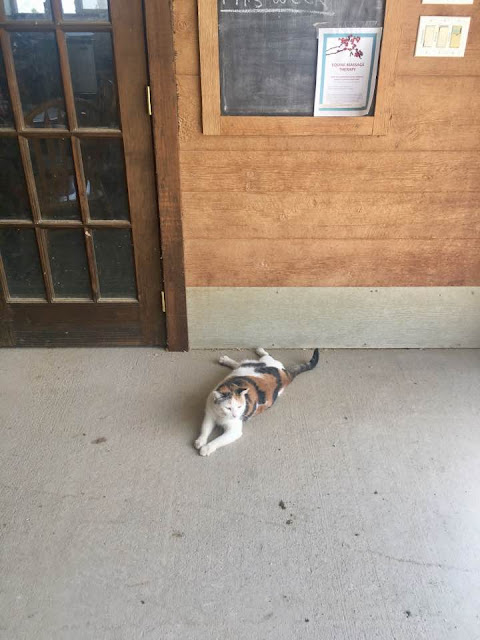 Striking terror into the hearts of young mice everywhere

She loves being in the barn after a brief stint of trying to be an indoor cat. She follows the trainers around, will crouch under the jump standards during jump lessons, walk the edges of the arena and perch on the tack trunks in search of mice. She is short and square, with a belly as wide as she is tall. She sleeps any where she can find a comfy spot: the sun warmed sand at the edge of the garage door; curled up on one of the cloth covered chairs next to the tack room; in the shavings in a horse's stall; or on the hay nets on the hay stack. She is a prodigious hunter and the number of mice has significantly decreased since she arrived. She is sweet and affectionate and demanding of attention. She loves the kids who come to the barn and can be packed around in tiny arms without protest. The mice generations that grew up without a barn cat have learned to fear the sound of her tiny paws. 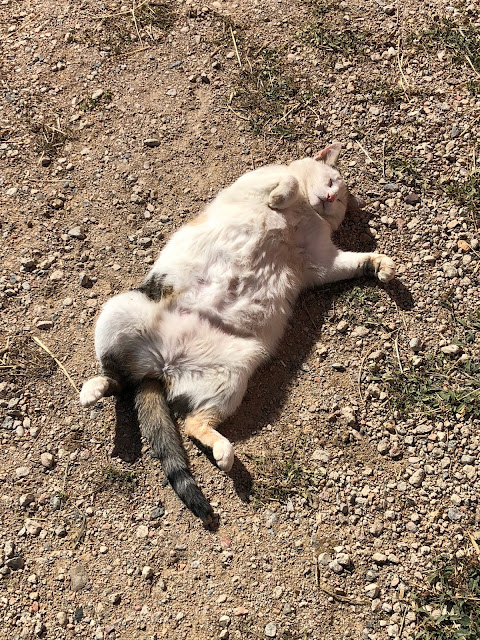