Our history of dressage: 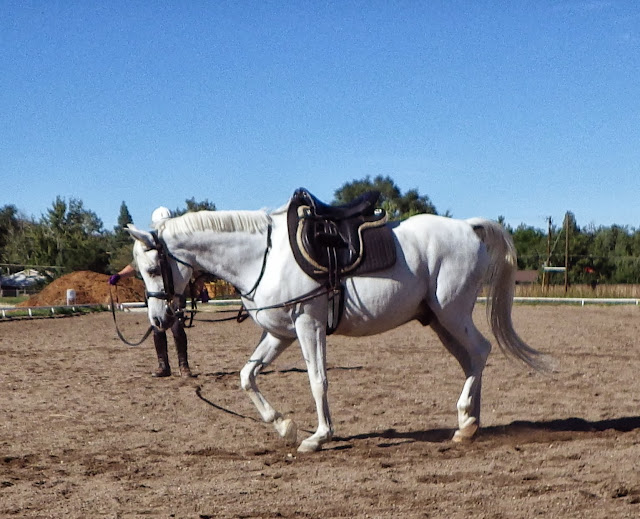 In 2013 we started here.
Side reins.
Pulling to frame.
Very Unhappy horse. 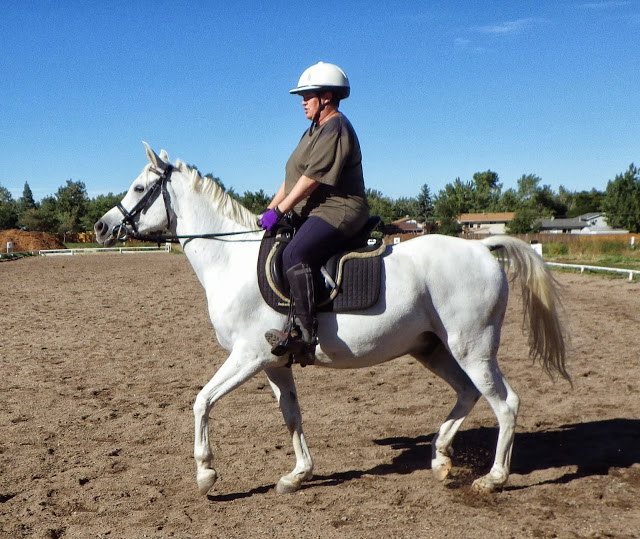 And when I got on him, I had this,

That first time attempting dressage was horrible. I told my instructor I wanted to work on learning the tools to do Working Equitation and to show eventually. I have never had any desire to do regular dressage. She, on the other hand, wasn't interested in training me to do Working Equitation and didn't know how to give me the tools to do what I needed to do with my horse.

And we looked awful.
I had no brakes. I had an unsound and sore horse. I had a saddle that didn't fit and wouldn't allow him to lift his back. I didn't know anything about dressage or being on the forehand or riding back to front. All I knew is that the harder I tried, the more unhappy I was. Then came the day where Ashke bolted in the indoor and it took me a lot of work to get him stopped. Something needed to change so that I had some semblance of control.

I quit the lessons (catalyst was a conversation where I was told I could do regular dressage or I could move barns) and found a new barn, plus changed from a snaffle bit to a grazing bit. It wasn't fantastic for WE, but it gave me what I needed to get him stopped. We left the arena and spent the next two years trail riding to the tune of almost a 1000 miles.

The trail riding helped with Ashke's overall strength and stamina. It didn't necessarily address the nuances we were dealing with in his hind end and legs. It did help me get stronger in my core and back, which helped with both my back pain and my balance. Slowly, we both got better.

Then I started taking lessons with Amanda in 2016. I picked her after watching her ride Alectra, a polish arab mare who was sweet and very sensitive. She was kind and positive and I knew after watching them together, that I could trust her to help us get better without harming either of us or putting my relationship with Ashke at risk. That plan was put on the back burner after the horrible leg degloving Ashke had, plus the reinjury. At the end of the summer last year was when we really started taking lessons.

Ashke has now started to develop the really strong muscle at the base of his neck, just in front of his withers (Rhomboideus). His withers have filled out and are even on both sides, no longer underdeveloped on the left. He has high withers, but also has a thick band of muscle running side to side over the top of them (Spinalis dorsi). The muscle that runs along his spine has developed (Longissimus dorsi) and is actually higher than his spine, finally creating that spinal trough you see in really fit horses). The muscles that hold the shoulders and withers in place are thick and heavy (Long head of triceps, cervical ventral serrated) and his pectorals are very well developed. Those muscle groups allow him to lift through his withers and shift more of his weight back on his haunches.

The myofascial release we did several months ago seems to have finally resolved the chronic lameness/stiffness of the right hind leg that needed to be managed so carefully. Ashke is now sound when I first get on (knock on wood) and immediately settles into a free moving, open walk. I'm still careful to warm him up before asking for more technical movements, but it takes much less time to do so and the cross cantering is completely gone from his gaits, unless we are fighting. 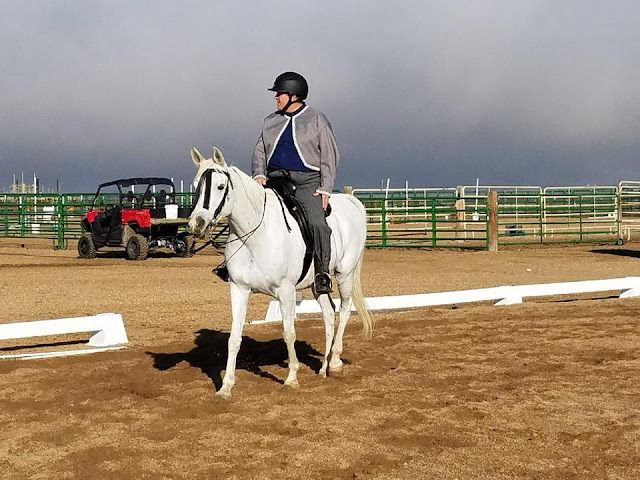 So strong and fit

Dressage has come to be something that I really enjoy doing. We are mostly arena riding right now, in part because of the changing weather, but also in part due to pure enjoyment on my part in watching, guiding and learning the new and varied things we can do with our bodies. Last night we cantered the triple barrels with changes through the walk, holding the reins with one hand. I did learn that I need to make sure we are on the same page, that he is listening to my legs and seat, and we are doing something he knows very well, before I can switch to one hand. However, when all of those things come together, he is magical.