Today, Lisa (the woman who drove me down to rescue Ashke) came over and picked us up in her trailer to take us for a ride at Bear Creek. She borrowed a Morab (Morgan-Arab cross) from her friend for the day. His name is Jackson, but Lisa calls him Mongo.

Lisa was at the barn at 9 am and I was almost ready to ride. I had groomed Ashke and picked out his feet, while J pulled the saddle/bridle/pack out of the tack room. Lisa has a three horse trailer and Mongo was about twenty minutes south in the direction of Bear Creek, so Ashke was the first horse picked up.

He was exceedingly nervous. I ended up putting the come-a-long on him to get him to walk in the trailer. Once the rope was over his haunches, Ashke walked right in. I got him secured with hay and carrots and we drove to pick up Mongo. I expected Ashke to settle down and travel without any issue, since he had trailered from Amarillo to Denver without any.

Boy was I wrong.

This is what greeted me when we stopped for Mongo: 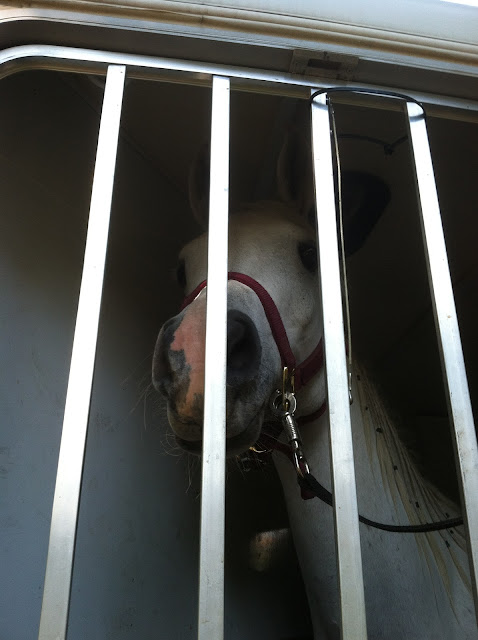 Ashke was so stressed he was visibly shaking and trembling from head to toe. He was sweaty on the shoulder and flank. Even with me in the trailer stroking and doing T-Touch on him, he was upset and unhappy. All I can figure is that the only time he has been trailered is when he was being traded or sold to someone new. He calmed down when we brought Mongo in and actually ate a couple of bites of food. I would guess he has always been trailered as a singleton in the past and having another horse next to him was a relief.

We got down to Bear Creek and discovered that there was a 10k and a bike race being held in the park at the same time. It made for interesting riding. We parked near the arena down by Bear Creek Stables (T and CJ had a week of summer camp there last year) and got saddled up. Ashke was very stressed when he was first unloaded, so I lunged him in the arena for a couple of minutes to give him a chance to settle down. He did right away and seemed to find comfort in a routine that has become very familiar to him. 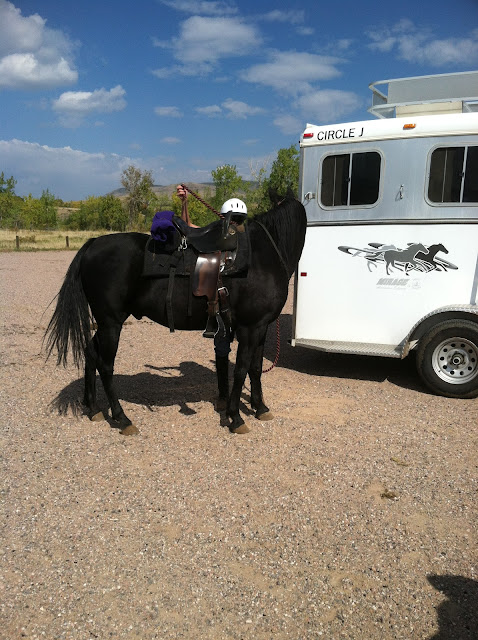 That's Jackson, aka Mongo. Just about ready to go. 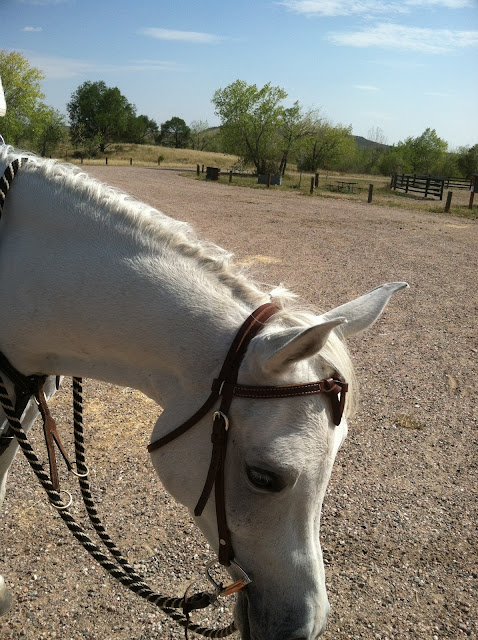 And Ashke wanting to know why we haven't taken off yet.

J, T and CJ went geocaching on their bikes while Lisa and I rode. They found one but were frustrated in finding any more since J didn't know the area or where the paths were to get to the geocaches. I think they had fun though. 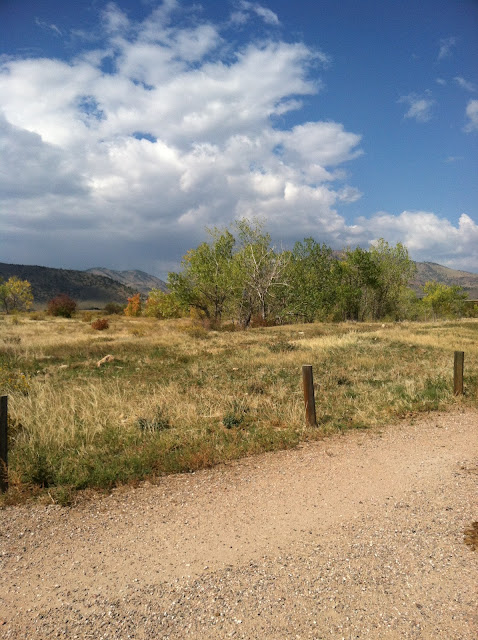 This is looking west from the arena. The clouds threatened but there was only one drop of rain. 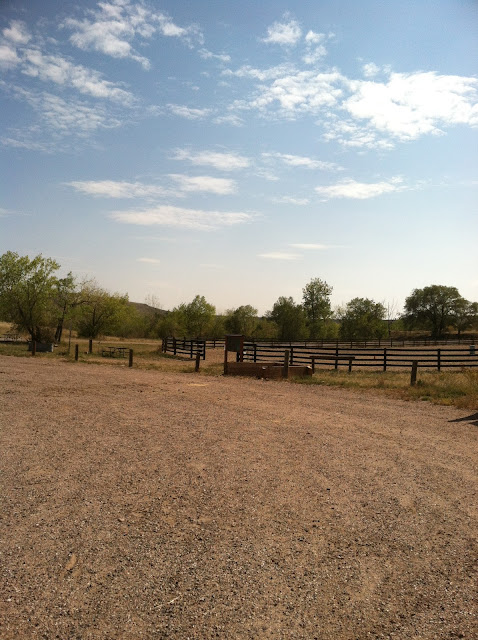 This is looking east from where we parked toward the arena.

Once we were ready to go, J and the boys took off and Lisa and I went into the arena to warm up. Mongo tried to buck and act up with Lisa, but she managed to get him under control. Ashke was great. No fuss. Listened well and took his cues from my verbal commands. We cantered around the arena a couple of times and then we were ready to go. 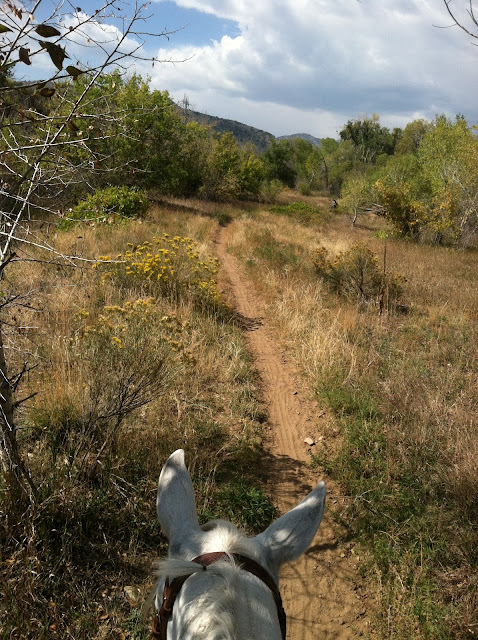 Fairly nice trails to follow. We did some bushwhacking as well, since the runners had right of way. We started toward the east, but doubled back and headed west. We figured if we were going to be dealing with runners the entire day we might as well ride where Lisa was familiar with the trails.

Ashke snorted the entire time. And he didn't want to walk in the shadow under the trees. He would snap his feet up, kind of like a cat touching water. Rocks were scary and so were the sticks lying all over the place.

And then we came to this: 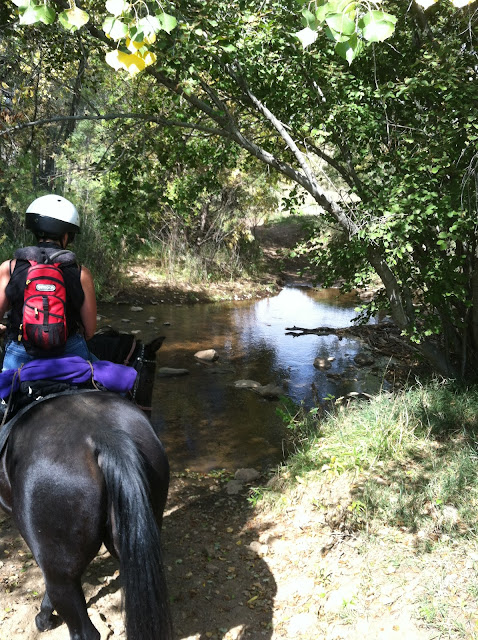 I would love to say that the horses went through it without any problems, but that would be a lie. We got off and led the horses across the creek. Luckily, I've started wearing my cowboy boots and they faired just fine, which is a good thing because if I had my North Face shoes on, my feet would have been wet for the rest of the day. Ashke went across without any problem as long as I was leading him. 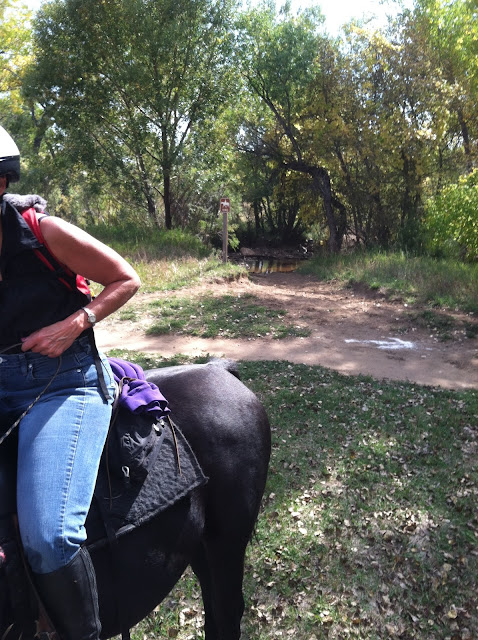 The creek crossing from the other side. I promised myself that we would ride across the creek on the way back. We did. It took a couple of taps on Ashke's flank with the bat to let him know I meant it when I asked him to walk through the water. He stopped and got himself a drink. Then he walked across the creek. I was so proud of him. 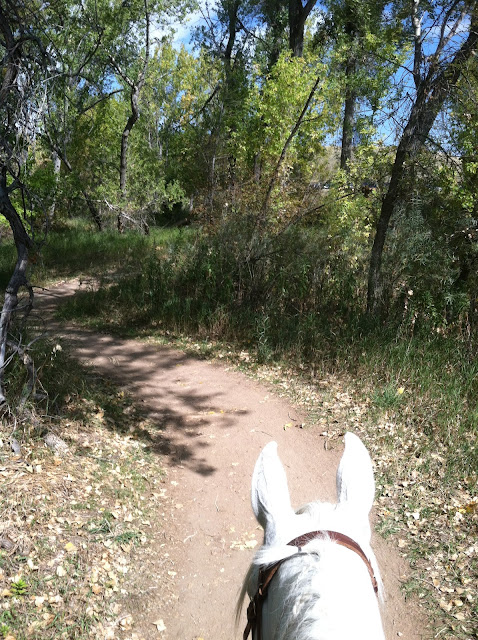 Ashke seemed to enjoy the changing scenery. I was carrying my bat but only used it once, on the way home (can you guess when?) 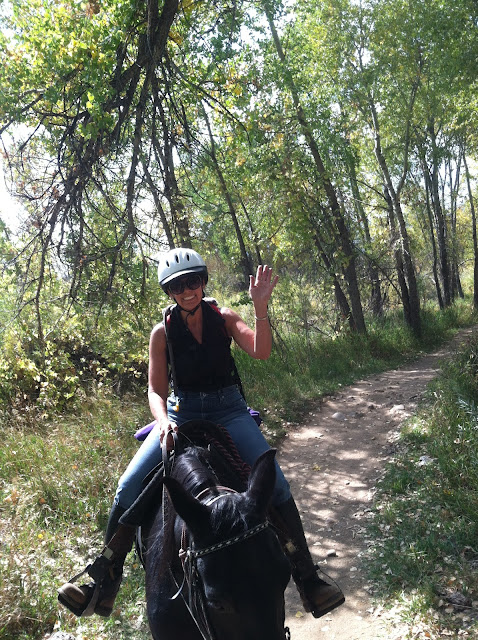 Lisa seemed to enjoy herself and Mongo did pretty good, although he was much sweatier and breathing heavier than Ashke. I think Lisa and I could cover some decent ground, if she could ride him enough to get him in shape. 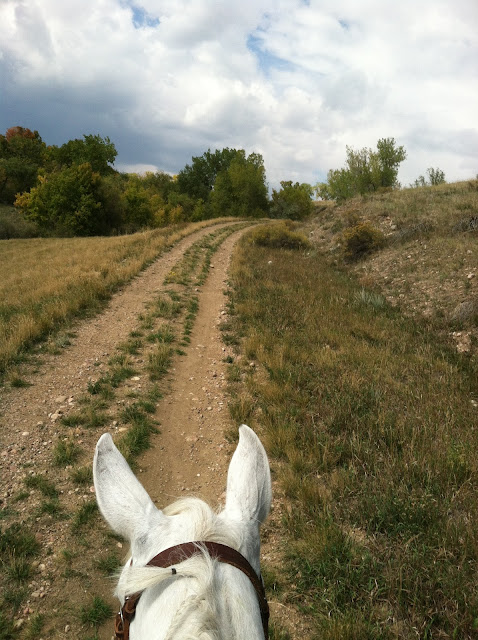 You can't tell, but this is a fairly steep hill. And very rocky. Ashke did pretty good going up, although Lisa thought she could see muscle weakness on the right hip where he tied up in June. It is going to be one of the things I ask the chiropractor about when we go see her in two weeks. 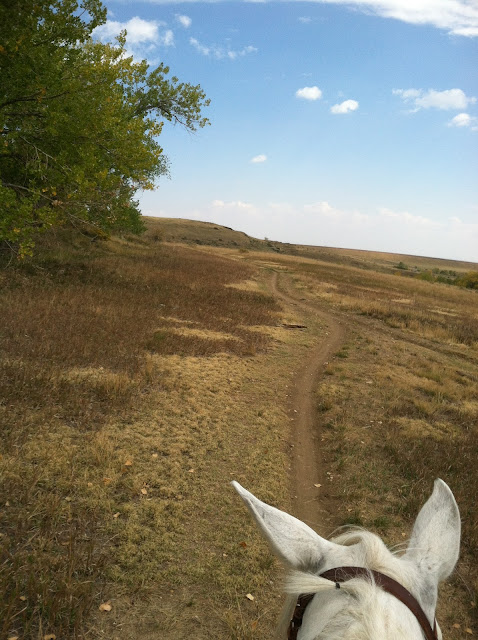 At the top of the hill, it opened up and leveled out. I know Lisa likes to canter a lot, but I didn't feel like pushing Ashke that hard. He is still being conditioned and Mongo hadn't been ridden in a long time, so, since I was leading we mostly walked with some trotting added in for good measure. 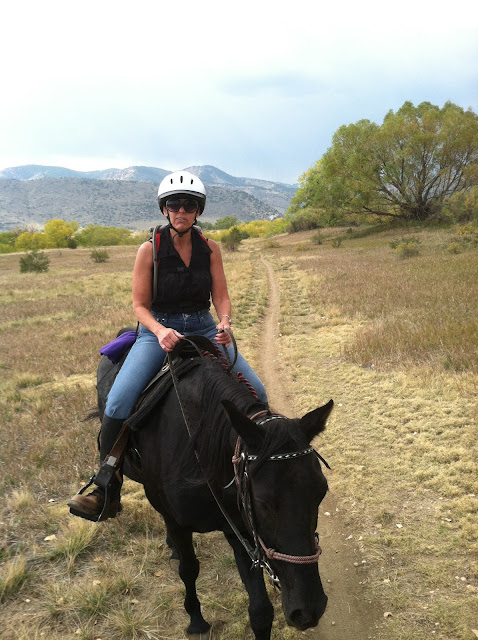 We stopped here so Lisa could put up her glasses. It was starting to get cloudy and grey. Mongo started trying to lay down and roll. Lisa really had to struggle to keep him on his feet. 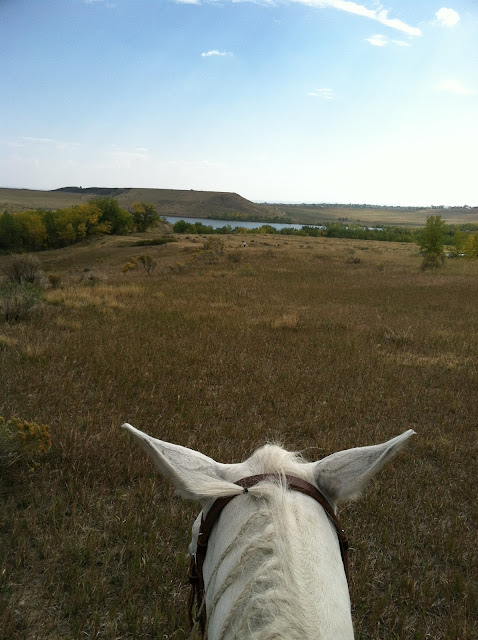 Such awesome country. There was some prickly pear with fruit on it. One of these days I will try and make prickly pear jam. We managed to avoid them. 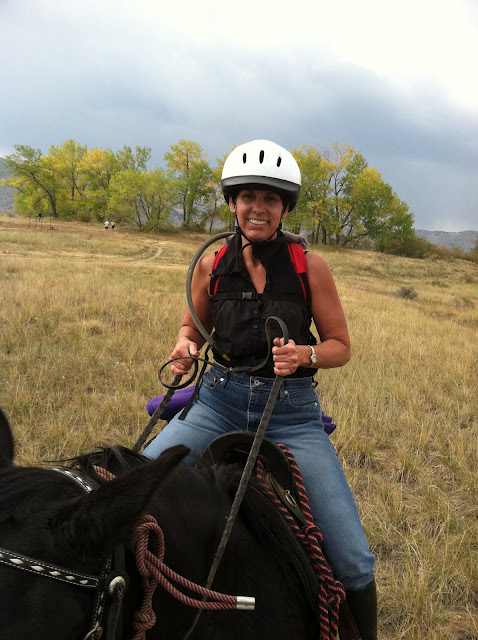 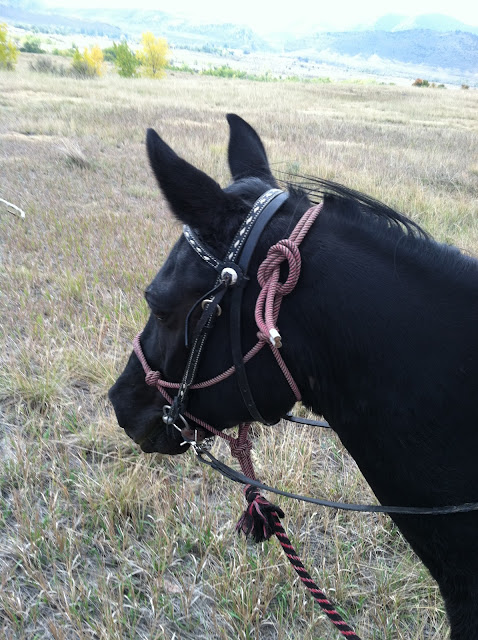 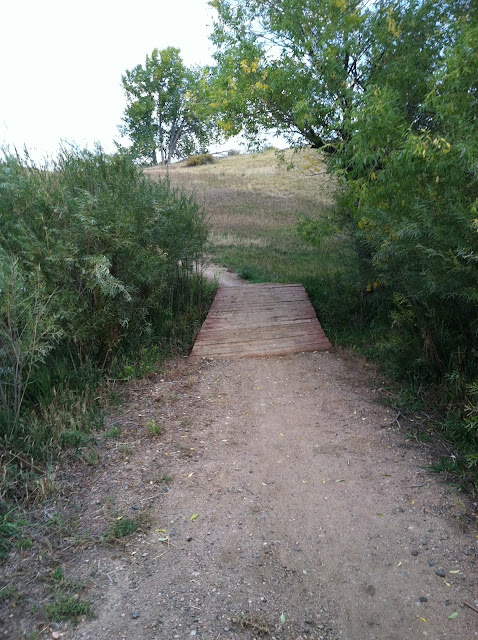 We crossed this bridge twice. Ashke followed one time and led the way the second.

Lisa wanted to ride for a while longer, thinking we had another half hour before we were to meet J and the boys for lunch. We rode some of the way up the other hill before turning around to retrace our tracks back to the food. I think we had ridden enough. I didn't want to exhaust Ashke and we had covered terrain today we hadn't seen before. We went up and down 500 feet according to my app. It was enough. Besides I had to pee like a race horse. So back we went. 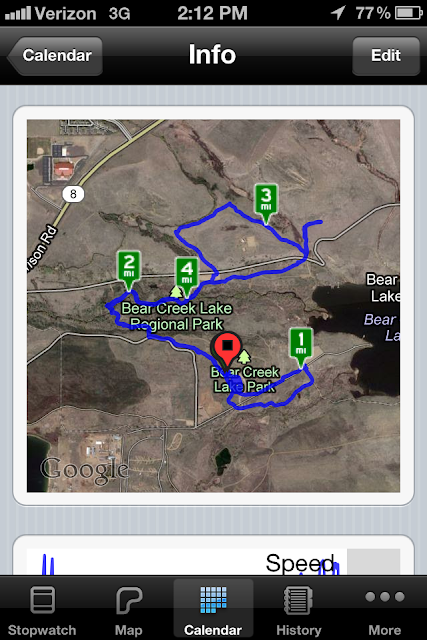 It sure felt like we had ridden farther than 5 miles in one hour and seventeen minutes. It would be fun to organize a ride there with the stable. Although, I'm not sure any one would show up.

Any way, the day was great. Ashke was awesome. I hope that as we go on he will realize he will come home from our trips and not be so stressed about the travel. I had to use the come-a-long and pressure to get him back in the trailer. He tried to load himself backwards. I got the rope off of him and got him turned around again. He was fine until we unloaded Mongo. Then he got stressed again and bit me. He tried to bite my face off after we got back to the barn. He needs to figure this out if we are going to do riding outside of the arena. Which we are going to do. He needs to get comfortable. We will be trailering to Henderson in two weeks. Maybe that will help him settle.