There has been an outbreak of pigeon fever at the barn.

What? What the heck is pigeon fever?

Having not ever heard of pigeon fever before I raced to the interwebs for answers. What in the world did we do prior to google?


Also referred to as dryland distemper or Colorado strangles, pigeon fever earned its name from the characteristic swelling of a horse’s chest from abscesses in the pectoral muscles. Swellings can also occur along a horse’s ventral midline (belly) area and in the groin region, affecting sheaths and udders. The initial clinical signs can be vague, sometimes showing only as lameness or a reluctance of the horse to move.
The equine version of the disease isn’t caught from pigeons; instead, the transmission route is thought to be flies, especially cattle horn flies, carrying the bacteria Corynebacterium pseudotuberculosis. While rarely contagious to humans, we can easily transfer the infection from horse to horse via our hands or equipment that has touched a draining abscess. A similar strain of pigeon fever affects goats and sheep; cattle are susceptible to both versions. All it takes is a single bacterium entering a wound, abrasion, or break in the horse’s skin or mucous membranes for the disease to take hold.  --http://www.holistichorse.com/Disease/the-growing-threat-of-pigeon-fever.html
I also did some additional reading. Outbreaks are most common during hot, dry conditions and seems to originate in the dirt. Horses housed on dirt are more likely to have this bacteria than those housed in stalls.
Brian Miller, a veterinarian who teaches at Colorado State University and runs its Equine Field Service, thinks it's probably everywhere and outbreaks increase when dry weather turns the ground to dust that carries the bacteria into scratches and other small wounds. Once a horse develops abscesses, the disease can be spread by flies landing on the infected areas and then carrying the bacteria to other animals, he and others said.
We have applied SWAT on Ashke's chest and midline down his belly (where the horn flies like to snack). I also found a 69" fly sheet at Brighton Feed that came with a neck wrap and covers most of his body. 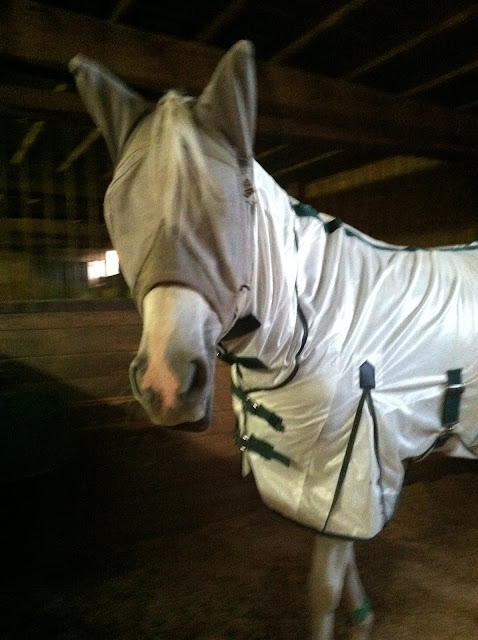 Doesn't he look sweet and completely covered? We also got the leg bands that emit fly repellent and keep the flies away. There is very little of him that is not covered. 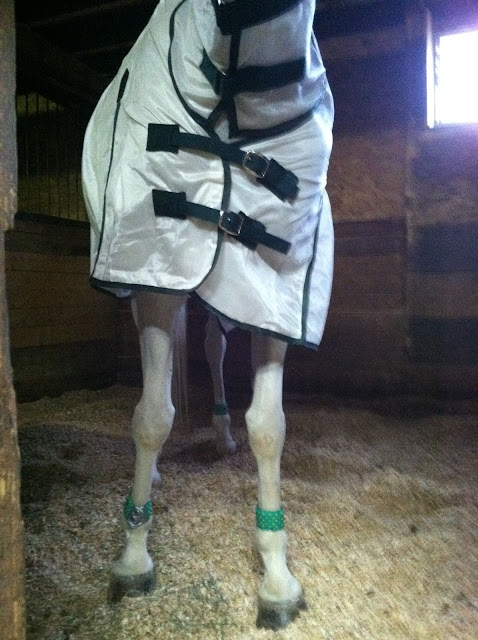 For some reason the fly sheet slides to the left side. I don't know why and I don't know how to fix it. He is probably going to have rubs on his shoulders but that's better than developing abcesses in his chest. I have inspected Ashke's chest and can't tell if there is swelling on the left side or if it is an abcess. Grace thinks he's okay. If it's not an abcess, then Ashke is developing some pretty nice chest muscle. 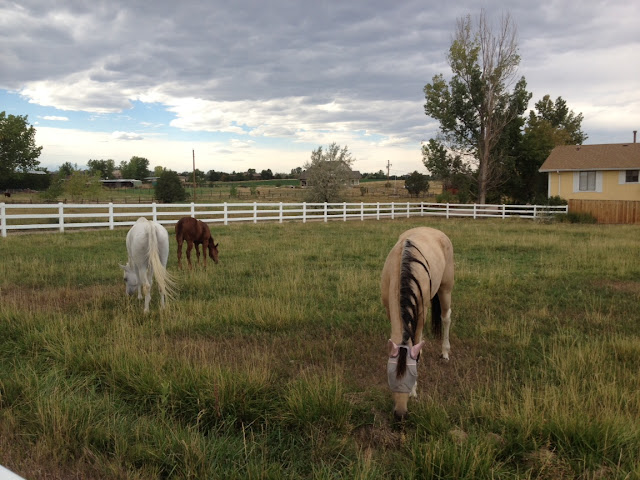 As far as the shin splints go, Callie came down with a swollen left foreleg on Sunday after our marathon ride. Nicole believes and I agree, that Callie needs some rest and we need to do less next time. She's still a baby, in so many ways. Nicole said that she just got excited and probably pushed her too hard. They cantered a lot more than they had before, and Callie had been ridden a lot longer than Nicole had ridden her before. So, time to take a step back, let Callie heal, and start again slow.
Good news for Ashke - he came back completely sound. And Paul wants to ride out with me, so maybe I can find someone to ride with until Nicole and Callie can go out again. I love riding with Nicole and we can do a shorter ride minus the minis once Nicole decides she can ride out again. However, in the meantime, I still need to keep Ashke moving forward with his conditioning.
﻿
Posted by Cricket at 1:56 PM