I know one of the resounding questions I've had in regards to Ashke was whether or not he was going to work as an endurance horse. I think I've had an underlying thought that if he wasn't going to work as an endurance horse, that I would find him a home where he would be loved and worked, just not in endurance. I've flip-flopped back and forth about the keeping him/not keeping him question and have kind of had the "wait and see how he does" mentality.

This weekend resolved any questions about his ability/interest in being ridden as an endurance horse. I now know he has found his forever home. He did fantastic on our Saturday ride with Nicole. 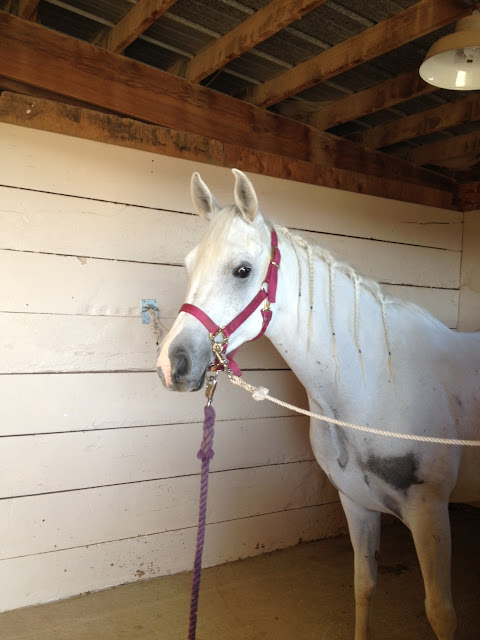 Ashke was rested on Tuesday and Wednesday. Thursday he was worked in the round pen for about fifteen minutes. Friday night I rode him for 30 to 45 minutes in the indoor arena and then forced him into the indoor wash room and washed him off. Friday night he felt really good under me. All of his gaits were great and we even cantered in a small circle at one end of the arena. He had lots of energy and although he fussed a bit when the other horses left the arena, he listened well and I was able to ride him without any problems. 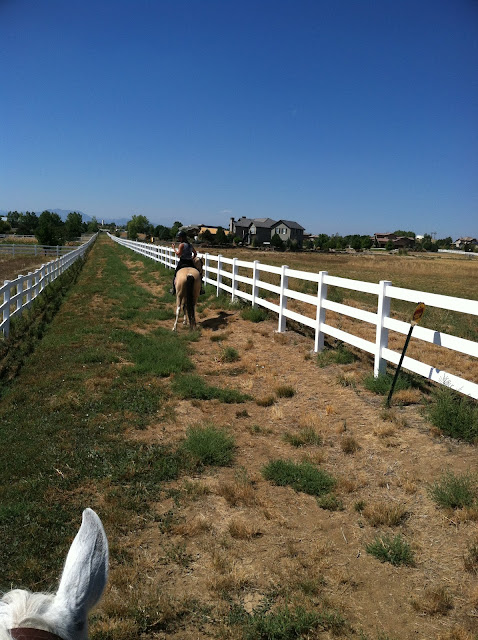 Nicole and I rode out after warming up in the arena. Callie was a little testy in the arena and kept kicking out when Nicole was asking her to work. They had a brief "Come to Jesus" moment, in which Callie figured out Nicole was the boss and then she settled down to work. Nicole was able to get Callie to work at a canter, albeit on the wrong lead, but it was a nice canter and Nicole didn't need to force her into the gait, she just sat and gave a little squeeze and off they went.

When we finished in the arena, we rode out. There was just the two of us, but that was great because then we could ride where and when we wanted without worrying about anyone else. We had a great time and the horses did awesome. We started out on the same trail I rode out on with Marit and Pam. 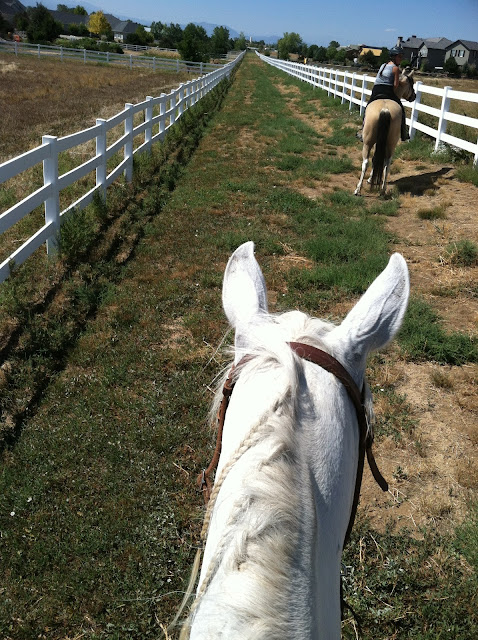 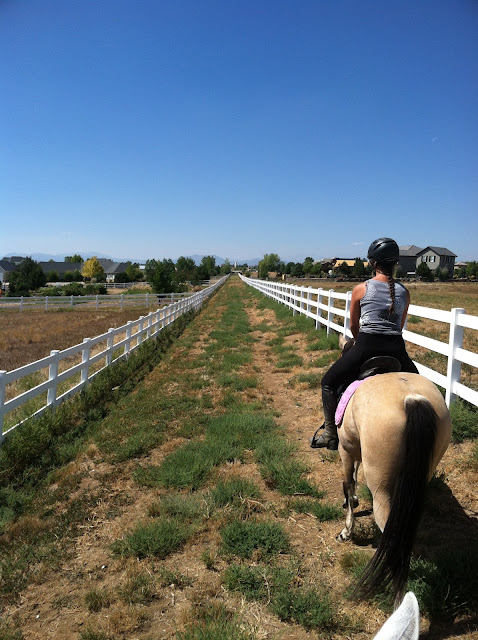 Ashke and Callie are at about the same place in their training, which makes it nice to ride with Nicole. Add to that the fact that Nicole is amazing in her ability to train horses and her great personality, and I enjoy riding with her; it made for a wonderful day. Callie is also beginning to mellow in regards to Ashke, so riding them together has become much less "marey" and much more pleasant. 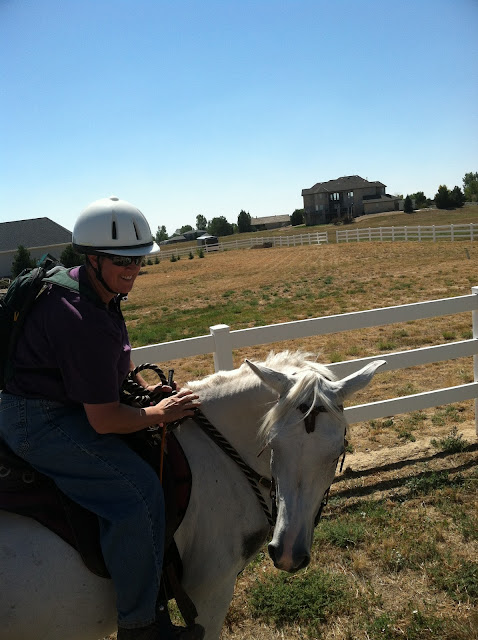 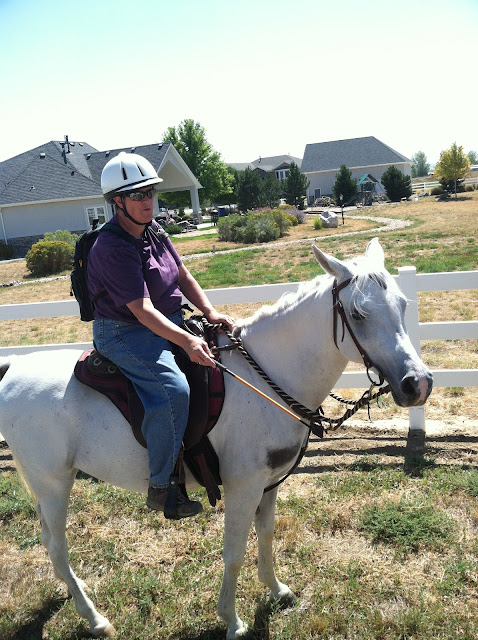 I was trying to get Ashke to prick his ears in the direction of the camera, but he just kept them tilted back - probably trying to figure out what the hell I was doing. 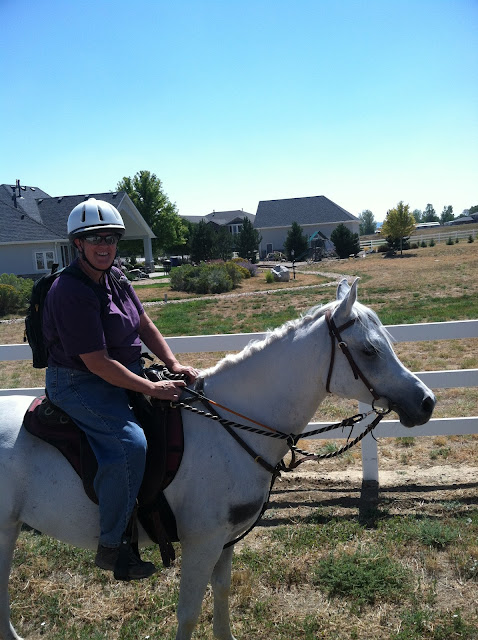 I rode with my camelbak. It was a lifesaver, but I need to figure out how to keep the air out of the bag so there is no scary water sloshing noise coming from Ashke's back. Nicole keeps saying she needs to get one for herself. I shared because it was pretty warm. Ashke moved very easily and we only had a couple of times where he balked. 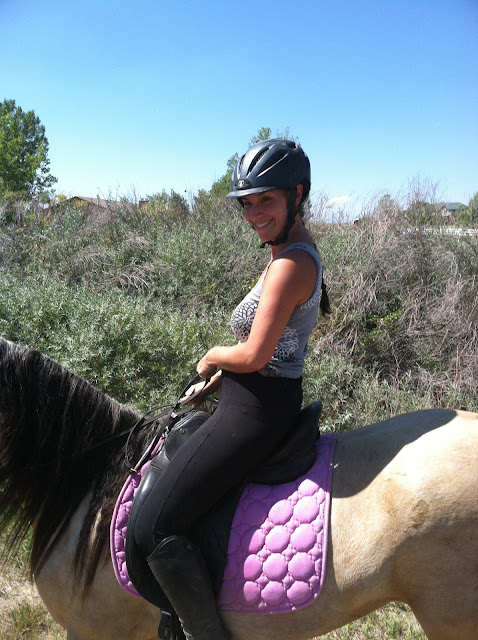 Doesn't Nicole look happy? She is talking about taking us and the horses to a place in Niwot where we can work the horses through streams, in ponds, through trees and brush, stepping around and through things. And they have a galloping track that goes around the outside, so we can spend some time cantering. I'm really excited about going up there in two weeks. 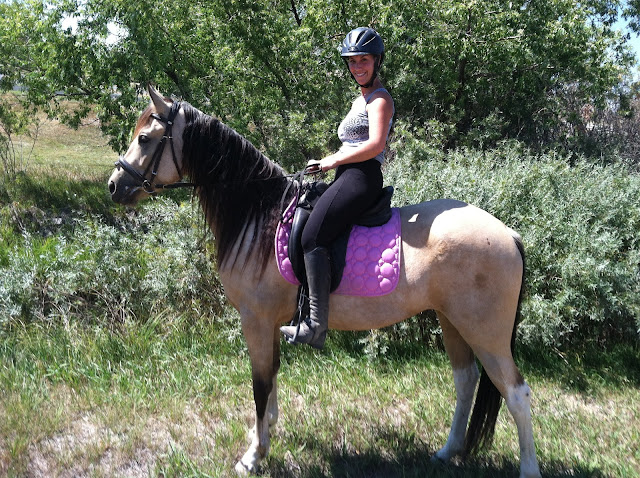 Doesn't Callie look great? Isn't that the best freaking mane ever?!!! She's a pretty well put together horse for a three and a half year old. Nicole rides her really well and Callie trusts Nicole. 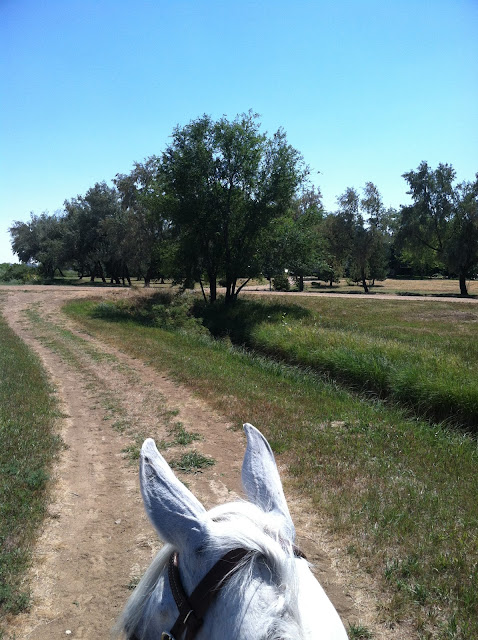 When we reached the canal, I asked Nicole if she wanted to do a short ride or a longer ride. She said she was good with a longer ride so we turned southwest on the canal. It was a very pretty ride with a lot of green, which was kind of surprising given the lack of rain in our region. We crossed one road and continued down the canal until we rode past a horse farm that had two miniature stallions in a pasture next to the trail. Ashke and Callie were pretty freaked out by them.

Okay, Ashke was a little freaked out and a lot curious. Callie lost her freaking mind.

She almost went backwards into the empty canal. I looked back to see her frantically backpeddling away from the stallions and towards the canal. It was empty but very deep and she could have gone over backwards if she had continued on her path. That would have been disasterous. I struggled to get Ashke turned around since he was a little bit nervous about the freakishly small horses. By the time we were turned around Nicole had slid off Callie and was controlling her from the ground. I slipped off Ashke as well.

This situation is the exact reason why ground manners are so darn important. Callie has been schooled for several years by Nicole and she knows that Nicole is the undisputed boss from the ground. Her trust in Nicole is reinforced when Nicole is on the ground and it showed in our interaction with the minis. Ashke and Callie both touched noses with the stallions (who were very excited to have potential mates on the other side of the fence. They seemed completely obvious to the fact that they were just about as tall as our horse's hocks. What they lacked in height, they made up in eagerness. I think one was going to use the other to give him a boost.) Even after touching noses, Callie tried to climb on Nicole's shoulders to get away from them. We hand walked them past the stables and around the bend where we were confronted by a sagging tree with drooping branches. We hand walked them under the branches and barely cleared the space under the highest branch. On the far side of the tree was a road so we led them across the road. On the far side of the road was a huge open field that led south to 144th and North forever. We had no desire to go back past the minis so we headed North. We were 'sploring. 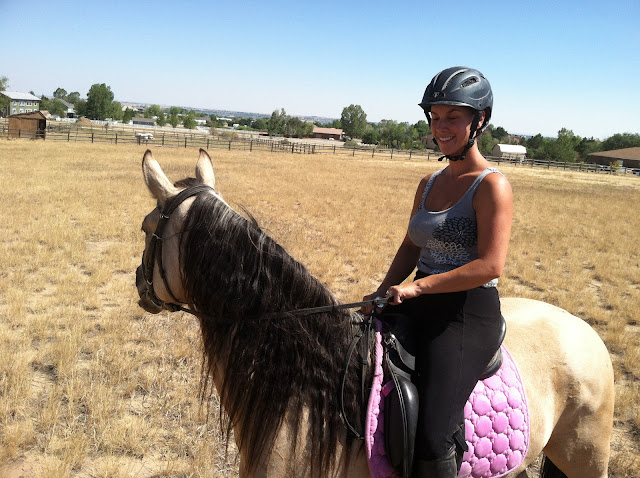 We crossed back over the road and made our way around a subdivision, riding through sere ground. It was very easy to see the lack of water in the terrain. The footing was great and both horses did awesome. Callie was still a little tense but relaxed as we went on. When we made the turn to the right (East) there was a wonderful, flat, smooth piece of ground and Nicole asked Callie for a canter. Callie moved into the nicest little canter. Ashke jigged a bit and I let him join her in a canter. He was doing pretty good, however, the water in my camelbak was sloshing and Ashke had his ears back listening. He tried to speed up and run faster and the last thing I wanted was a horse running away from something on his back. I asked him to trot and he obediantly slowed down to an extended trot. (I have already figured out how to eliminate the air from the bag so it is silent when we trot or canter.

Nicole was so happy about the canter. It was amazing. 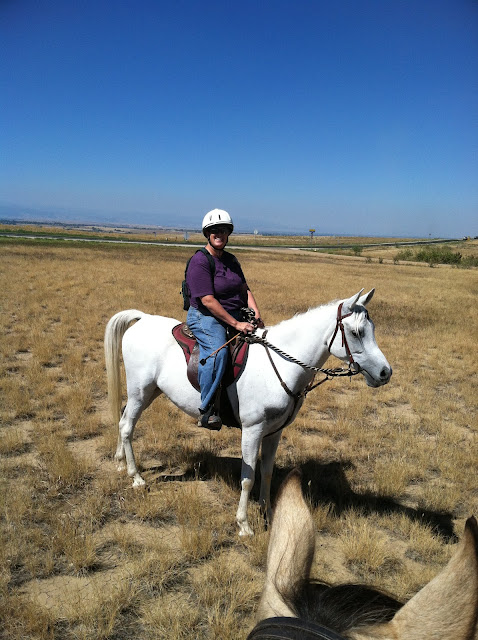 After we rode past the subdivision I recognized where we were. We turned south to a dirt access road which took us back to the canal. We followed the canal north until it reached the equine trail that led back to 152nd. 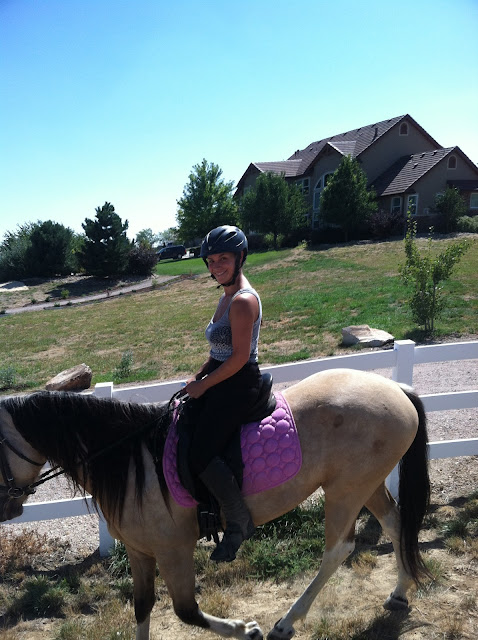 The horses were both pretty tired. Nicole, however, seemed pretty happy. 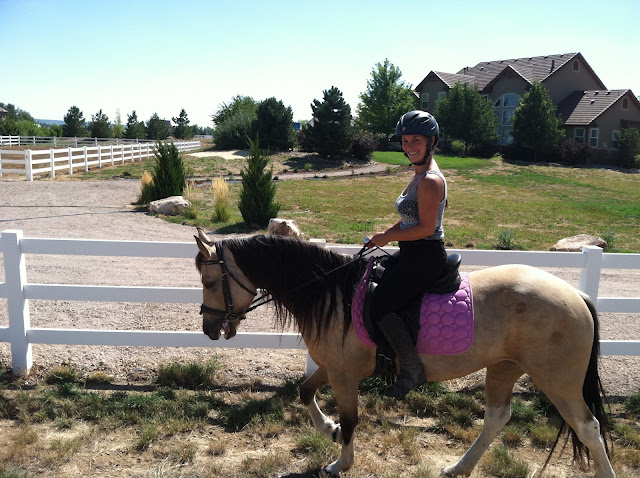 Callie was starting to stumble and clip her toes on the uneven ground.

Ashke was still walking pretty much like he started out. He was tired though. 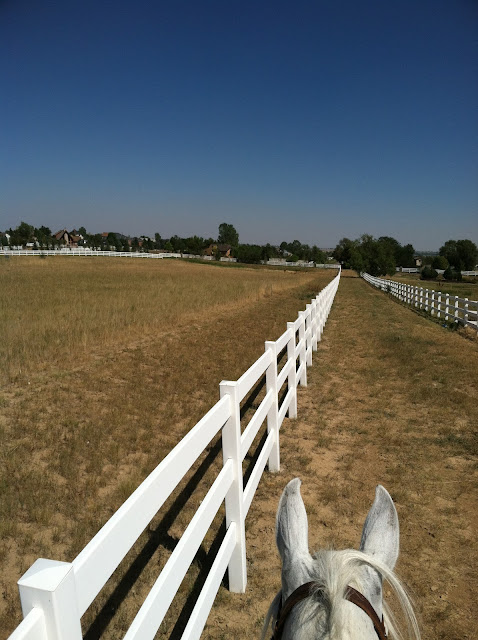 Ashke spent most of the day with his ears pricked, paying attention but not stressed at all. He showed that he loves being out on the trail, that he loves seeing new things. There was never a moment, minis aside, when I felt like we were in trouble or he wasn't paying attention to me. He has such a nice, long walk when we get going. And he seems to like to get going in areas where we haven't been before. It will be a lot of fun to stretch him, take him to the mountains or to Bear Creek.

We cantered along the side of the road when we got close to the stables. Callie cantered further than we did, but I wasn't comfortable with the footing and there is a gate that Ashke absolutely hates.

When we got back to the stable I checked my Runmeter app to see our distance. We had ridden 6 miles in an hour and 49 minutes. Not bad for a horse that was on the edge of death 24 weeks ago and a young'un.

Here is the map of our ride. 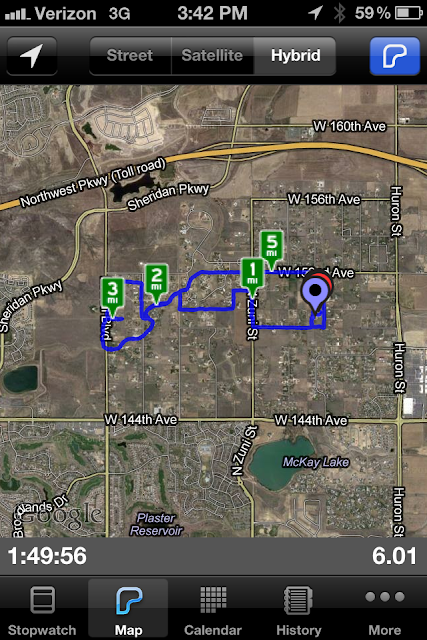 On our next ride we will go North on the canal, cuz no one wants to meet the minis again. I love this map app.

Ashke has been with me 24 weeks. I think he looks awesome. And I think he will be an endurance horse. The question now is . . . will Callie? 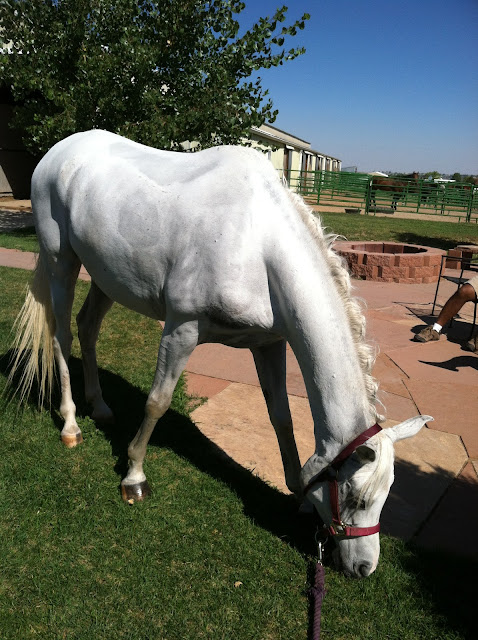 He is getting stronger every day. He's already pretty darn smart and I think he enjoys being ridden out of the arena. Next Saturday is another ride. 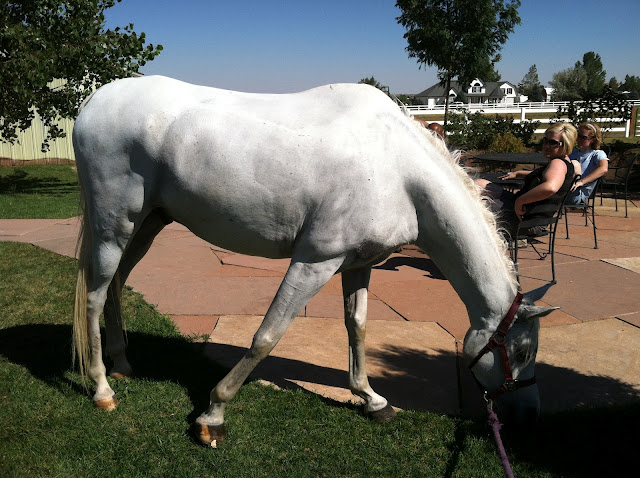 Enough weight to fuel his long distance but not so much it slows him down. He seems happy and healthy and so glad to see me.

Next Saturday I need to go to Down Under Saddlery to get a set of saddlebags. I might try to run over there on my lunch break this week. They have a set of three and I need them. I am going to set up an emergency kit in one side, which will have gauze, vet wrap, antibiotic, and a pair of wire cutters. I want to put a light weight raincoat in the middle one and then I can pack my lunch in the third compartment.

And, I've lost twenty pounds. Ashke thanks me.
Posted by Cricket at 7:39 PM