Our first adventure with the horse and bike was interesting, to say the least. T and his friend M decided they wanted to go with us, so we set out with T and M walking carrying their assault rifles (non-expanding-recreational-foam devices; read: NERF guns). J was on her bike and I was on Ashke.

Ashke did really well. We went up Pecos, turned west on 152nd and made our way to the equestrian trail. Ashke trotted quite a bit and also walked on a loose rein. He was a little directionless at first, but finally settled into his work. We did about a block of equestrian trail before hitting another road. I had J and the boys turn right and walk the road to the canal bank. By the time J got off the little bit of off-road riding she had done, there were a ton of goatheads in her bike tires. She stopped counting when she hit 27 without rotating the tire. Ooooops.

Goatheads are a small three pronged, hard as rock, natural tack from a plant called the puncturevine, which grows wild all over the place in Colorado. They suck. This is what J's bike tire looked like: 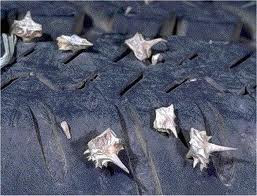 So then it was me on Ashke, the boys playing at reconnassiance in the empty canal and J pushing her bike. We went north on the canal bank to Sheridan parkway before turning around. When we turned around Ashke got testy. He reared and kicked out on me. I got him stopped, got off of him and made him work in a circle. In both directions. He wasn't too interested. I finally got him into a fast trot around me to the right. After a couple of circles I told him easy. That is our signal for him to slow down. He dropped his head and slowed his trot. I knew at that point that he had his head back in the game. I got back on and for the first mile he did a dancing, slow trot (think nervous horse at a parade). His tail was flagged and his chin tucked into his chest. I kept rubbing his neck and talking to him. Finally, he slowed to a nice walk and I was able to ride him on a loose rein.

When we reached the canal crossing, I got off again and walked with J until we reached 152nd. I got back on and J was able to coast on her bike. The boys had taken off running down the road and were quite a bit ahead of us. Ashke held a trot most of the way. When we turned down Pecos, we had caught up to the boys and J stayed with them. Ashke moved at a slow trot down the verge until we reached 149th. By then he was stumbling a bit and obviously tired. We walked back to the barn and untacked.

Here is the map of our ride: 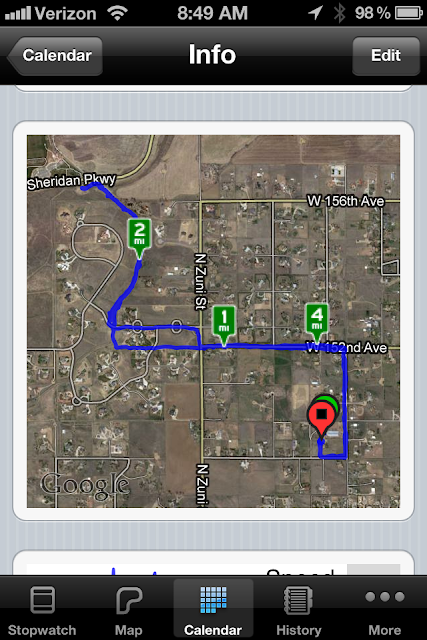 Yes, I know it is best to make them walk home, so you don't make it okay to turn for home and take off. Yesterday, however, I was not interested in doing anything other than maintaining my control while keeping him moving slow enough to be safe. He was out without another horse, which greatly increases the stress of riding out. I wanted him to enjoy our ride, listen to me and trust that I would get us home safely. As his trust in me increases, our battle-ride home will change. I was proud of him overall and our only issue was a relatively small one.

4.62 miles in an hour and 14 minutes. We had one small break while the boys were resting.