Today was an amazing day.

I went out early to ride with Nicole. She has finally found a home for Rhythm in Virginia with a woman who does Grand Prix and Dressage, which is what Nicole trained Rhythm to do. Because of the pending shipment, Nicole needed to get Rhythm her shots and an updated Coggins. While she did that I messed with Ashke - fed him peppermints and rebraided his mane. I also made a huge change with his rig.

First, I had noticed that the saddle wasn't sitting correctly on his back due to the equipedic pad I was using. It was very obvious when we cantered, since both myself and the saddle were bouncing on Ashke's back. I looked at the saddle pad and the foam in the pad has squished down to the edges of the saddle and was applying extra pressure on the upper curve of his ribs. No wonder his back has been sore. I took the pad off and used the original pad we had purchased with the saddle.

He was so much more comfortable. He walked out easier. His trot and canter were smoother and he didn't flip his tail like he had been. It was amazing. He was more responsive to the bit. And then we rode out of the arena.

But first, Nicole and Callie did this:

After their warm-up we went for a 2.3 mile trail ride. Nicole was hesitant to go farther than that, because of the splint on Callie's left front leg. She really doesn't want it to happen again. I was okay with the time because I needed to get home.

Both horses did great. There was no balking and very little issue, other than Callie wanting to trot. Ashke kept his ears forward the entire time, looking around and checking things out. I can't begin to describe how great he was and how happy I am.

Here is our route. I forgot to set the runmeter app until after we had left the farm. Just for clarification, we started and stopped at the same spot. 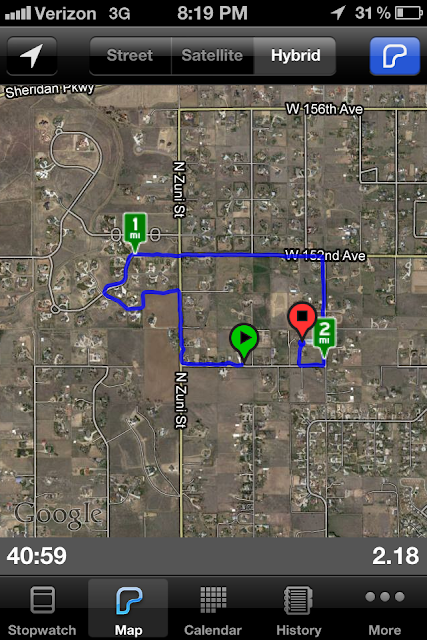