After the EOH ride on Weds night, I have spent some time thinking about why I keep collecting scores in the low 50's. The standard answer is that I am nervous, I don’t ride as well, or it means too much to me and that is making me tense. The advice I hear is “you should be doing this for fun”, to which my internal reply is “this isn’t fun”. Showing has not been fun, primarily because my scores are low. How fun is it to constantly see on paper “you suck”? I'm not making progress on selling myself on the idea that it doesn't matter, because if that were true, I wouldn't be showing any way. There are play days and clinics and EOH courses I could put up at the barn to play on without ever putting on my show attire and dishing out lots of money to earn a score lower than the last.

Yes, it is a great training tool.

Yes, it is great cross training.

Obviously though, that's not why I am doing this. On some level, not only do I want to do this in the show ring, but I want to do it well. And by well I mean getting scores that qualify for the National Championships, getting a score above 60%, and earning the scores needed to advance my quest in pursuit of a medal. So, no bullshit.

Why have I not earned those scores in the past, other than “I suck”?

First, I have been afraid to demand that Ashke remain on the bit. We are riding in a bit that is out of the norm for most dressage work, while also not riding in a manner similar to most western classes. Ashke has been less than happy to learn to carry us properly and only in the past six months have we both gotten comfortable with building our house as far as connection goes. Funny how that is the same amount of time we’ve been riding in a Garcia bit. If you don’t think this bit is good for this horse, you weren’t paying attention to my last video. Yes, sometimes I still grab with my hands, or he leans on the bit, or one or the other of us bonks him in the mouth (although more and more frequently its him), but the more we ride in it the more comfortable we both become. I know that I drop contact when I ride into the show arena, primarily because I’m afraid of what other people will think if he gapes his mouth open. I don’t want to be that rider everyone else talks about behind their back. I need to stop worrying about it and trust my horse. He loves the bit and as time goes on, our communication through it will increase.
I have also requested that Ashke remain on the bit as much as possible during our rides. It used to be when we were taking our breaks or warming up, he would go on a loose rein, but now I am asking him to stay connected to me, even during breaks or when he is stretching down.  As Amanda says "we need to live there". We built the house, bought the curtains, and moved in furniture, so now here we stay. This is a new thing for me. Contact is a foreign concept and not something I was introduced to in my earlier riding days. Of course, when all you are doing is jumping on bareback, tearing around the county at a gallop for hours on end, and your only requirement is that the horse goes where you direct it and stops when you want it to, there’s not much refinement there. 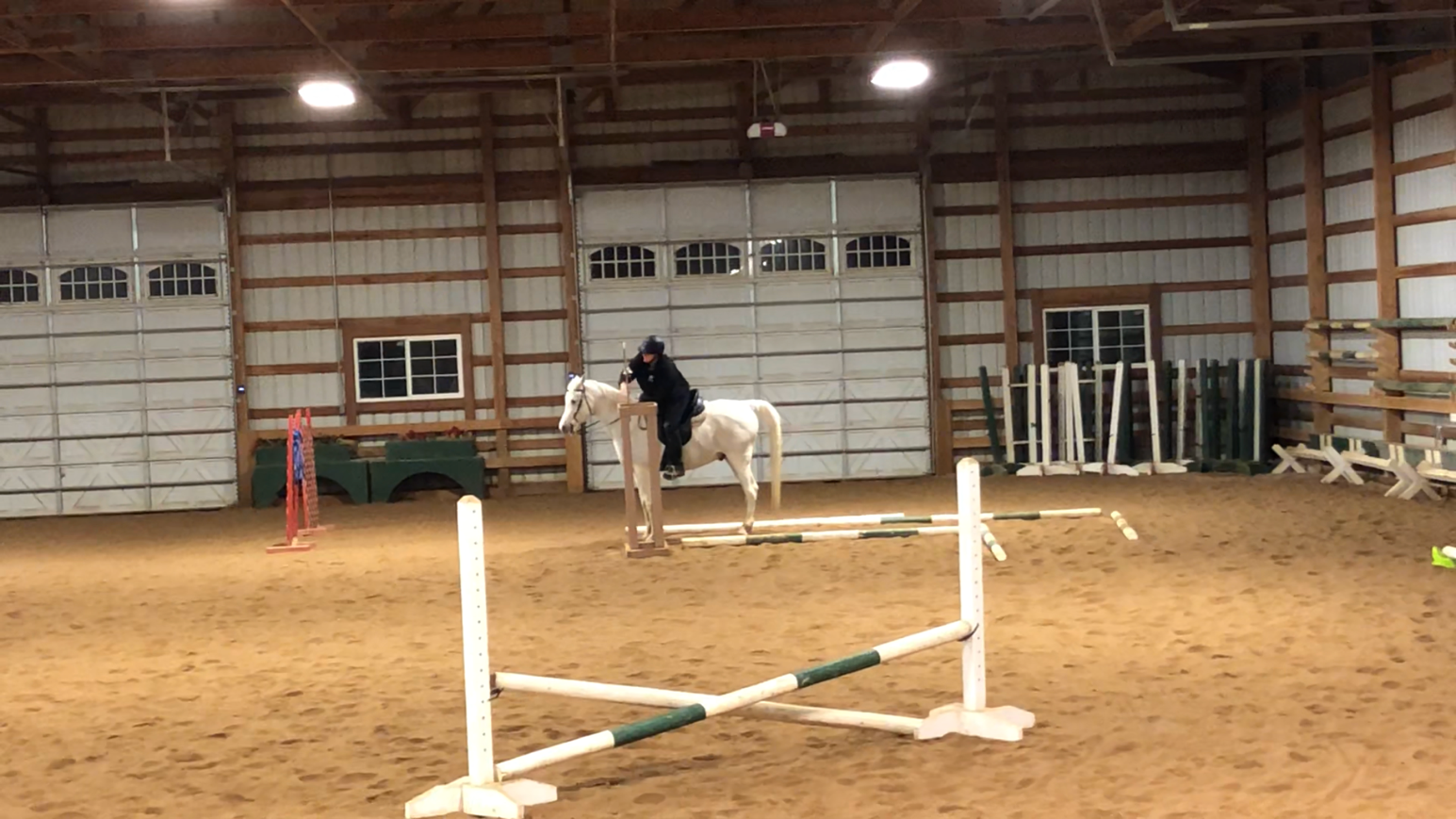 At some point he started adding a square halt
Second, in evaluating the tests, they are all structured the same way: enter at trot, do some trot stuff, do walk work, end on canter. My tests fall apart in the canter work and I can feel the exhaustion crashing over me as we struggle to retain balance and ride well. For the Intermediate A test, the tests starts with eleven trot movements, including lengthening to a medium trot, two 10m trot circles and two leg yields from X to the wall (on a 40m arena so super steep). There are seven at the walk, including a reinback and two walking turn on the haunches. There are fifteen canter movements, including two 20m circles at the medium canter, two 15m circles at the collected canter, 2 simple changes across the diagonal and a halt from a collected canter. All at the end of the test.
I need to canter more. I’ve been taking the approach that we get on, ride through the things we are working on, get off. Most of my arena rides are 20 minutes. That’s not going to cut it. I need to be increasing my cardio ability and endurance or we will continue to struggle at the canter. That means, riding more canter, for longer periods of time. This will be a challenge for me from both a focus and physical perspective. I have a hard time remembering the different things I can practice when I am riding by myself. It’s easy in a lesson, because that is part of what I pay Amanda for - remembering what we’ve worked on in the past and the new things we can add to help us progress. Her knowledge of what we can add to help us progress is the difference between a mediocre trainer and a great trainer. I have a much harder time on my own.
The second part of that equation is riding longer, which is hard for me. Even when we were on trail I rode mostly at the trot and walk. There were brief moments of canter work, but almost always uphill and for fairly short periods of time. Once we moved to the arena for most of our rides, my time in the saddle has diminished, because I don’t want to drill. However, we will need to expand our repertoire of exercises so that I am extending the canter work we are doing. Inadvertently, Dr D gave me a key to this when she told me to change my warm up. I can walk briefly to loosen and warm the muscles and then immediately move to cantering. This will put the canter work earlier in my ride and makes sure I don’t short change myself in the process. After I’ve ridden the canter for the 20 or 25 minutes I’ve set as a soft goal, then we can do the trot work for the last part of our ride. The good news is, this will not be hard on Ashke: I can’t physically ride long enough in the arena to make him sweaty. I am also going to incorporate cantering outside on trail as a goal once we are trail riding again, which won’t happen very much until after ski season, since my fam is hitting the slopes every weekend.
I started this new riding focus yesterday and spent the rest of the day feeling like someone had taken a bat to my lower back. I was working the 20m medium canter to the 15m collected canter in both directions for 25 minutes, with walk breaks to change the diagonal. I could feel the movement for the medium canter really straining the muscles of my lower back and today I am a bit sore. I will be sure to ride in my BOT back brace for the next couple of weeks to give that area some support while we work to strengthen those muscles.