On Saturday J had a special two hour lesson/class on the stationary bike (nutrition, work outs designed for specific events) and so I go to the barn before turn out. I knew that Ashke would be wroth with me if I put him to work phttps://youtu.be/e07HdJrQWNUrior to his play time, so I decided to strip his stall. It has been about a year, and although we go through 8 bags of shavings a month, I haven’t taken the time to pull it all out. It gets low during the summer, when he’s outside to poo, but I like to keep his bedding deep in the winter, because he lays down to sleep. (I have a real mental block when it comes to thinking he might possibly be cold). Plus, he lays down anyway and this keeps him from developing hock sores.
Ashke went out with Dante and I started stripping the stall. I was about half way done when I saw this:
This is why he can’t have friends.
And I have a pretty good idea of how he broke his left patella at 10 months old.
I didn’t want Ashke or Dante hurt, so once I recognized that the play was not mutual (Dante trying very hard to be good, backing away, herded by Ashke) I pulled him back into his run, where he stood and nuzzled Arden and played with his ice. I guess a couple of days ago, Ashke released Arden into turn out with him and Dante, so maybe he felt he needed to prove his dominance with the mare. Who knows. I just know that he probably needs to be with a mare, since he won’t try those games with her. This is the same reason he doesn’t get to go out with Nemo, since Nemo will give as good as he gets and I was tired of all the bites and scrapes on Ashke. Plus, BO was not reassured when they were grabbed for each other wind pipes.
I finished the stall and let the mats dry. Ashke has one favorite place to pee and it was starting to smell just a little. The stalls are picked twice a day, plus I am cleaning it when I am out, but still. With the temps being what they are, he’s inside a lot. Plus, Ardee has been peeing against the side of her stall and it is oozing into Ashke’s. I think he likes it. Luckily, it is on the opposite side of where he is peeing. Anyway, once the stall was clean and dry, I dumped two bags of shavings in and took him out to ride. Of course, in the fifteen seconds it took me to throw away the empty bags, he came in and scattered the shavings, peed and rolled.
Our ride was amazing. There was a lesson happening, so I couldn’t put out the poles or cones until the last fifteen minutes of my ride. Ashke did great anyway. I was riding the 20 m to 15m to cross on the diagonal to repeat the circles in the other direction (at C) sequence of the Intermediate A test, and he got a bit stiff legged at the canter. He got set down quickly, and made to stand. He never really relaxed, even after five minutes, but I backed him up, picked up the canter and finished the exercise. That was our only issue. We worked on canter circles and he was stiff and short striding, but got better as we went along. After the canter circles we did the trot circle followed by the leg yield to the wall, in both directions. He nailed that exercise, although staying straight in his body when moving right to left was more difficult (always).
I pulled out cones at that point and set up the following: 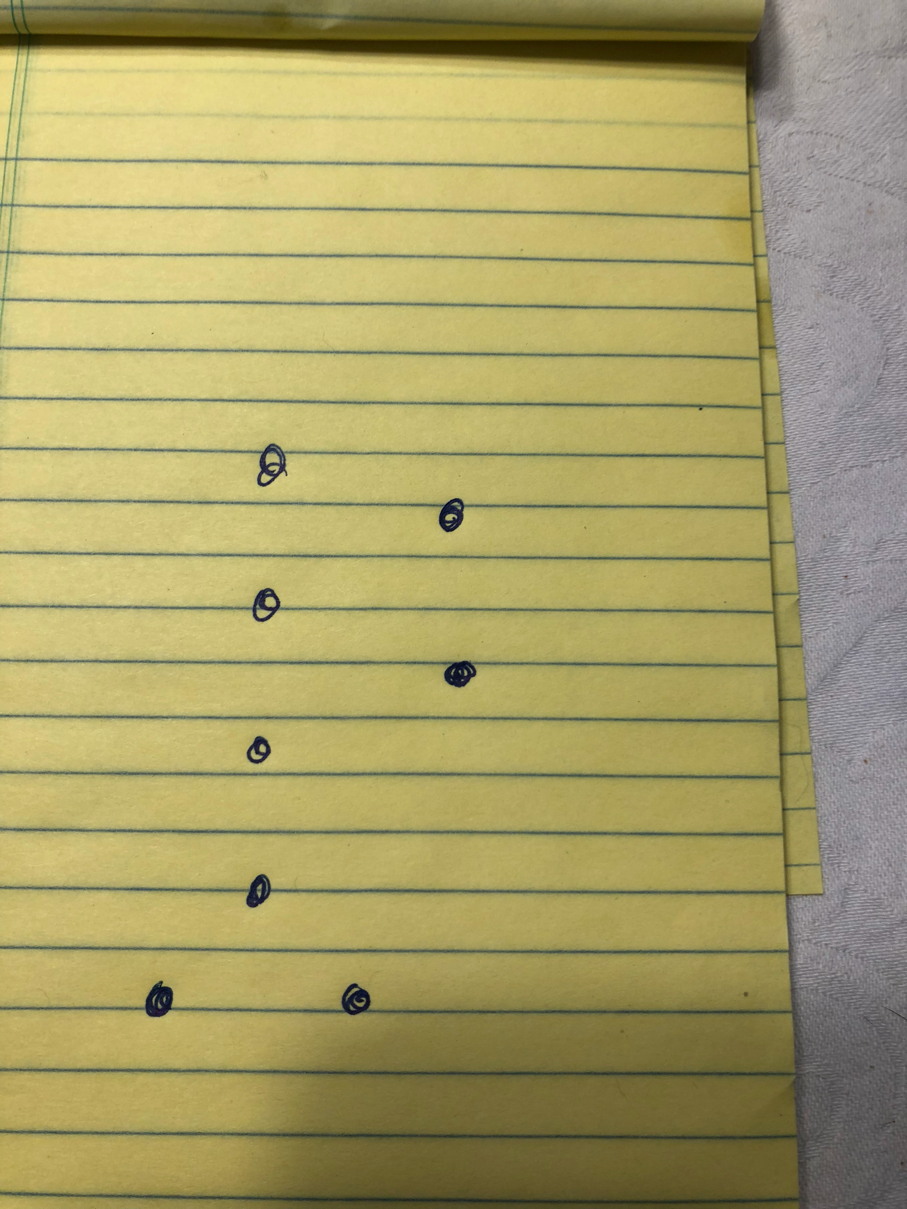 Double Slalom, Single Slalom, Drums and Figure 8 can all be worked with this pattern.
We did drums in both directions, which he was very good for. He is doing a much better job of keeping his hip under him, as long as I don’t try to make the circle super small. 10 m is the most comfortable at this point. We did the double slalom and he has it locked and loaded. We worked on our transitions through the walk. Then the drums again. Then we did the figure eight and segwayed into the single slalom. He was so confused the first time, but did it comfortably the second time. The transitions come quickly in that obstacle, with only about a stride of walk if you want to achieve the canter correctly. We worked that in both directions. We did some walk/stretch in between obstacles, but after working through all of that three times or so, we were done.
It was a really great ride to end the week on. I will be in Germany again for the next week. Hopefully, Amanda will not reinjure herself shoveling snow again, and will be able to put two rides on him for me. 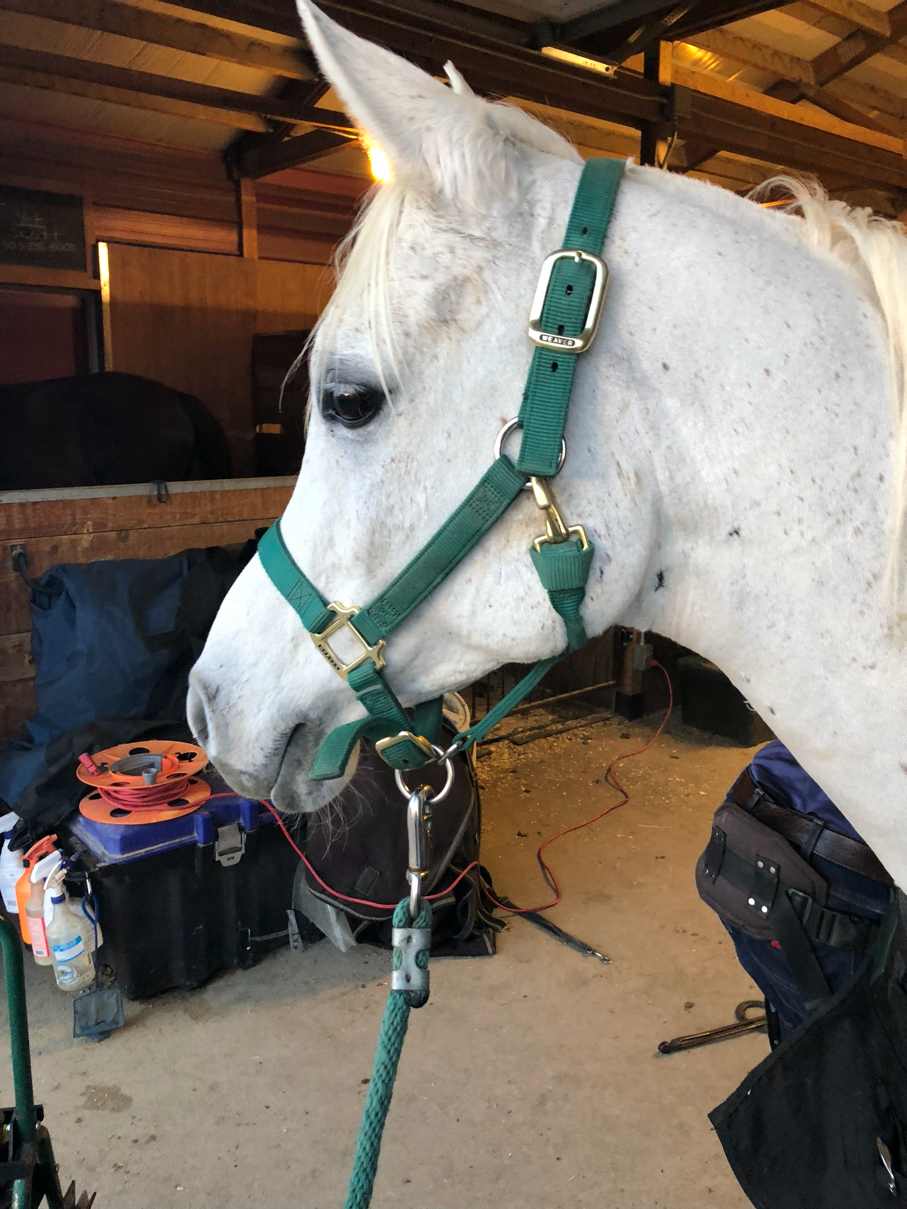 Being cute while getting his feet done.
Still have a touch of WLD, so will do more soaks when I return. 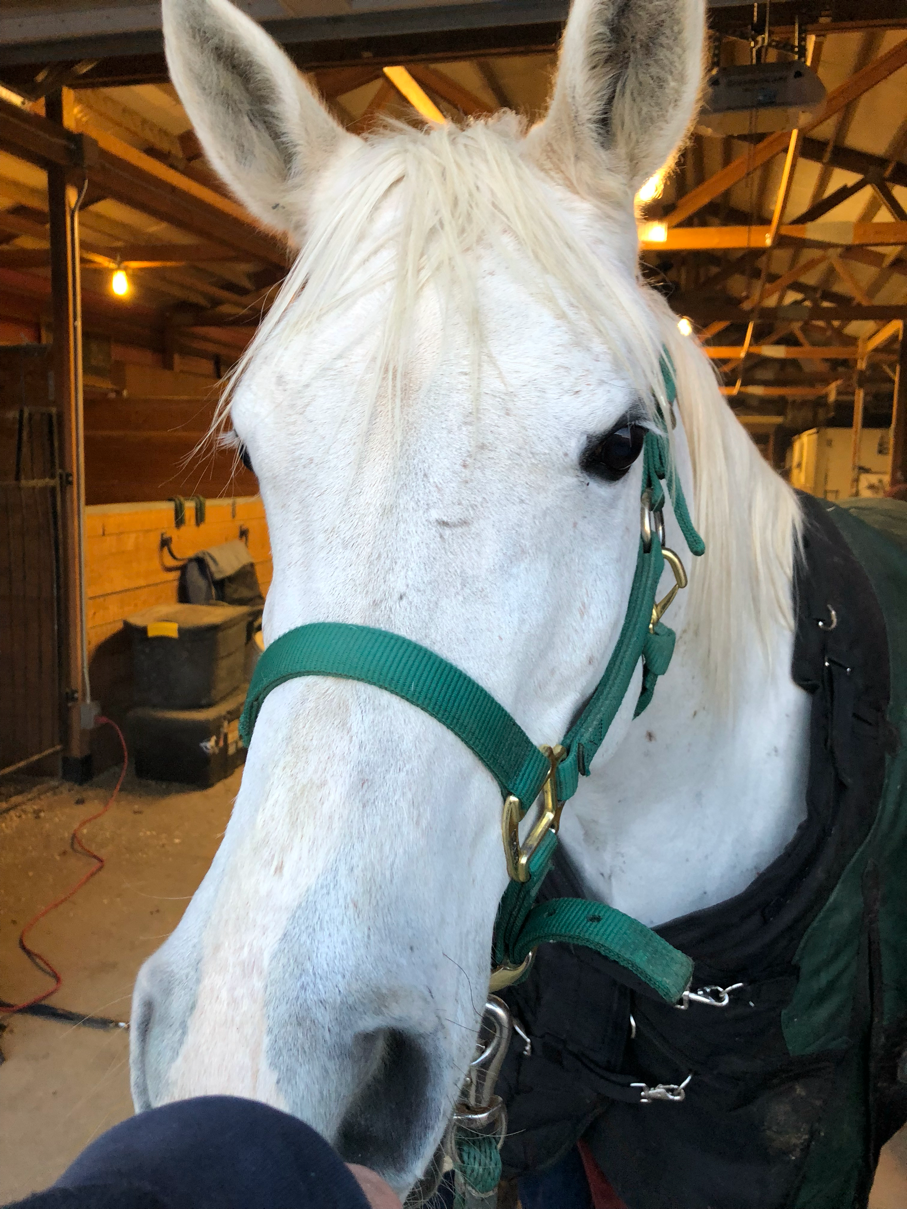