So, today was a planned visit to see Dr D and have our routine appointment to check all of the things. I decided in July that we should just make an appointment to see her every three months, as preventative medicine. I am asking for a lot of work, specific work with his body, and I want to make sure he feels as good in his body as is possible for me to contrive. It was a balmy 17 went we hit the barn, so I stripped off the mid-weight blanket and put the BOT mesh sheet on and covered it with my Rambo fleece (awesome deal from a friend for $50). Ashke balked at the trailer and refused to get on. I ended up using the come-a-long to get him to step up. I need to do some practicing on trailer loading, since he walks right on to go home, he’s just being a pill about leaving.

We were there a tad bit early and I turned him loose in the round pen to move a bit, after stripping the blankets from him. I could see something going on in his hind end, but it was very subtle.

The ground was pretty hard and Ashke was very up, but we managed to get what Dr D needed in order for her to evaluate. 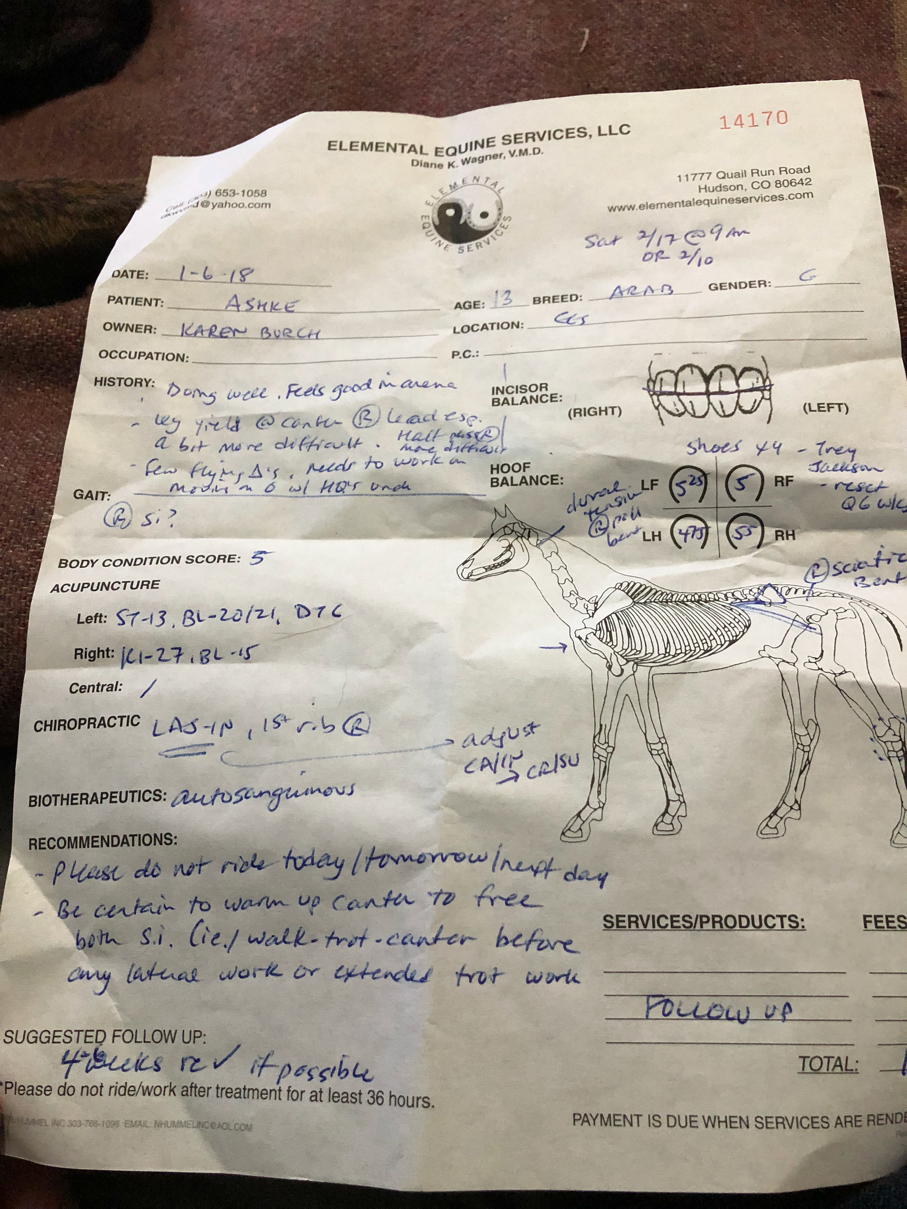 The telling thing on this is the width of the frog on each of his hooves.
He was favoring his left hind (not hitting the ground with the same force).

The first rib on his right side and the SI Joint on his left hip. The rib was due to the SI Joint, which was depressed on the left hip. This is the same thing we saw the last visit, although this time Ashke was much more reactive to the accupuncture. (He was also being a complete flirt with Dr D). She drew blood to inject into the needles, then began inserting needles at his points. The one she put into the middle of his SI area he flinched but didn’t move his feet. Then she set the one on the right and the one on the left and he let us know exactly how painful it was. It took a lot to get him to stand still so she could place the needles correctly and inject with his blood. Then she put one into the outside of his hip on each side and another by his flank. Once she had them set, Ashke turned and looked at his back and then at her, like he wanted to know what the heck all of that was. Dr D put four needles by his poll (poll to SI joint is how the tension is held).

Five minutes later he began to shake, which breaks my heart. I think it was his body’s reaction to the accupuncture and the pain it released, plus it was still pretty cold. We moved him under the heat lamp and let him stand. He was agitated, which both Dr D and myself read as a reaction to the left side of his SI. Dr D asked me about my typical warm up routine and what we work on in what order, so I gave her a pretty detailed account of what I typically do and the order I do it in.

Ashke expelled the needles in his chest quickly, along with the upper most right side poll needle. (You can hear the tinkle of the falling needles if you are really quiet. Dr D did some laser on his SI joint and lower back. 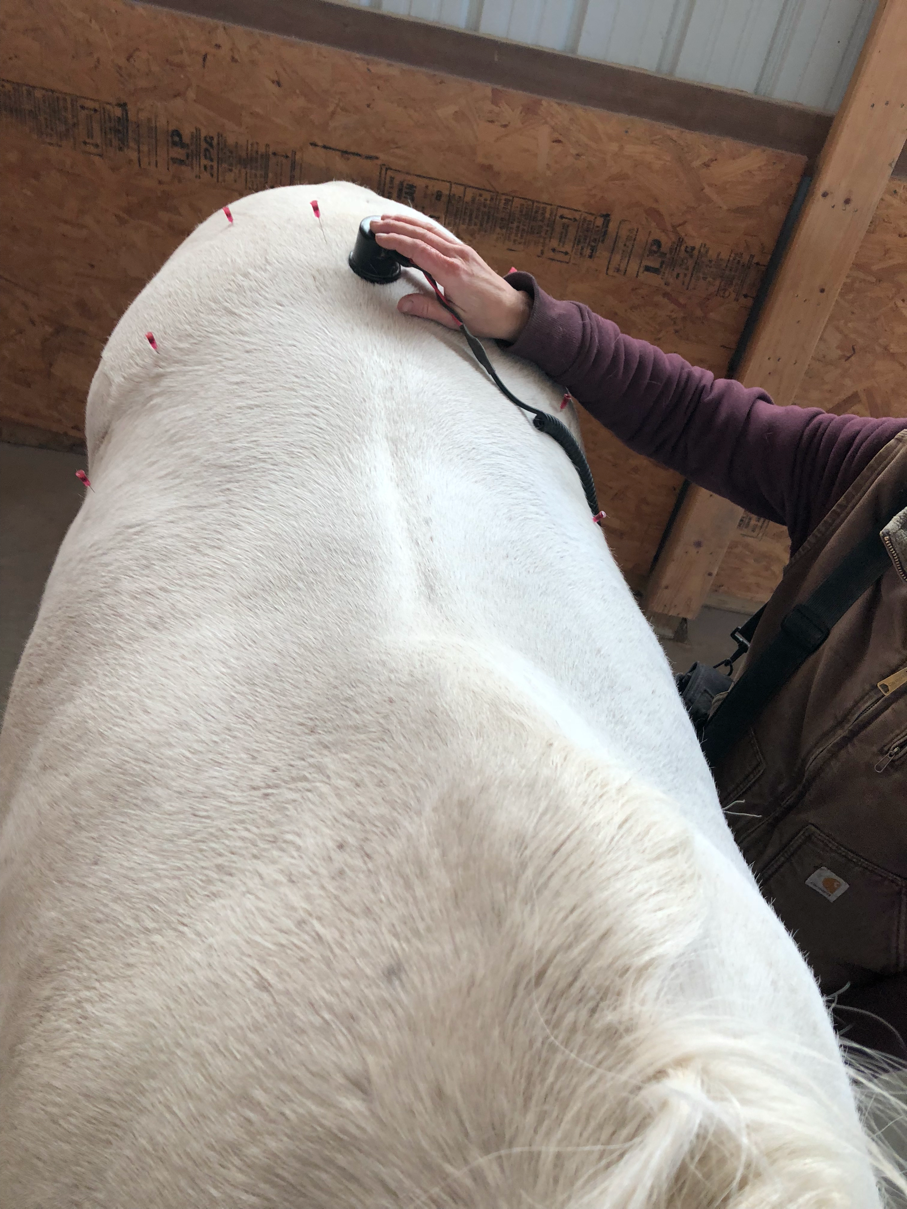 Dr D said she was amazed at the muscle in his back, how well developed his “shelf” was and how symmetrical it looked. I was pretty pleased. Means we must be doing something correct with our dressage work.

Dr D asked me to try something different in my warm up. She wants me to walk and then canter before doing any trot or lateral work. Not collected canter, just cantering around on the rail in both directions. Then I can work on trot and lateral work. Her reasoning is that the canter allows the SI joint to open and move independently on either side, where the trot will lock up that joint. I think I’ve always done my warm up in the walk - trot - canter format, with lateral work in the walk and trot before moving to the canter. Not because I was told to (although I have seen some warm up routines structured that way) but because I think of his gaits as a progression from walk to trot to canter. So freaking linear and I didn’t even think about thinking outside that box. (And I see other riders doing the same progression with their ponchos. If you have a horse with SI issues, you might try this and let me know if it helps you at all.)

The needle on the right side below the poll came out on its own  and I have never seen anything like it before: 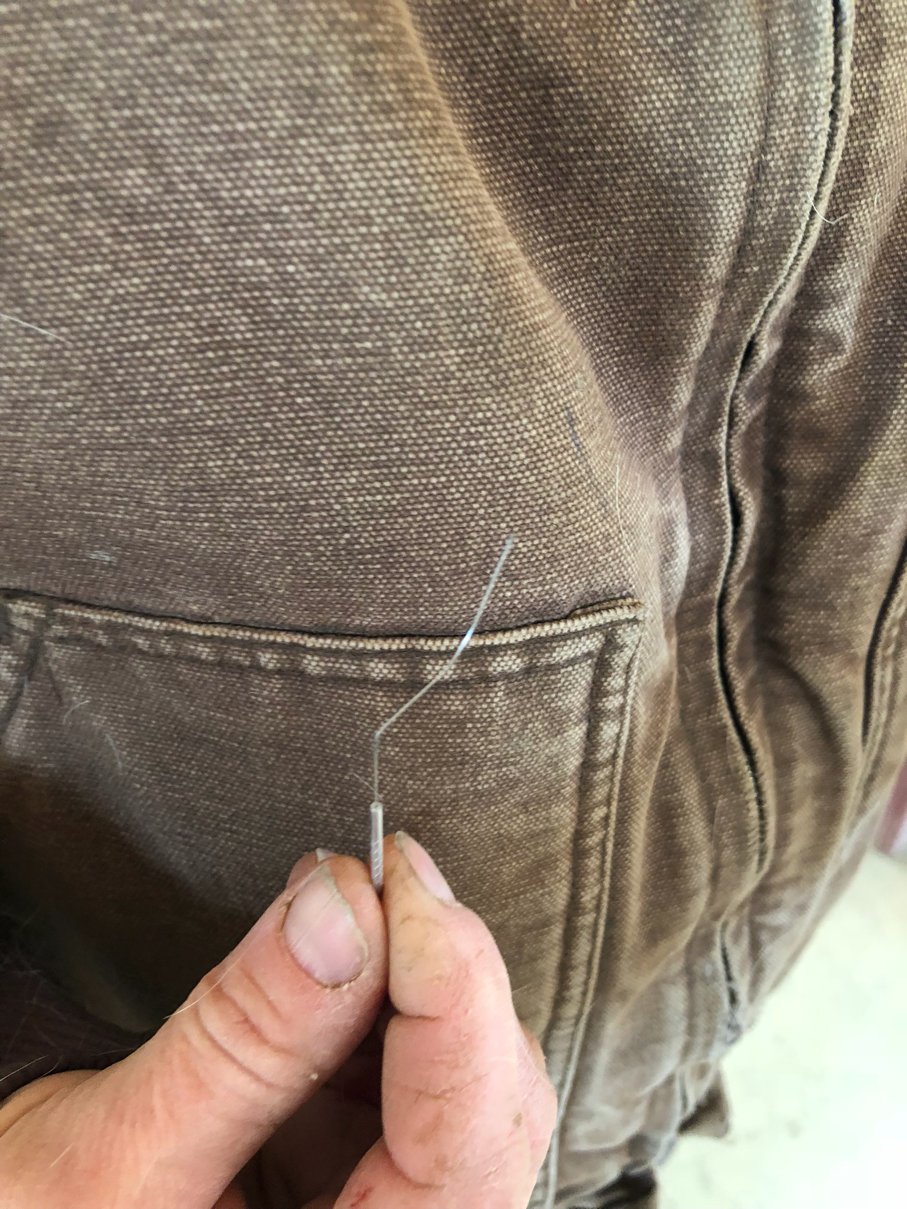 It’s kind of hard to see, but there was a definite curve at the bottom third, and a sharp bend in the needle in the first third.
The sharp bend is where the energy is blocked and the needle shift in response to it. That means the energy was “bent” twice, once very sharply.

We made an appointment for a follow up in five weeks to see if this has held or if he has the same issue (he usually doesn’t present the exact same way each time.) I got his blankets back on him and he peed while I was finalizing paperwork with Dr D. He walked on the trailer and we headed home. Dr D asked me to give him an extra day off before working him again, since that left hip was so painful. Our next ride will be Tuesday night and we shall see if warming him up differently will help.