Last week I asked Amanda if we could set a small course up and work the various obstacles as part of a lesson. I haven't ridden a series of obstacles since August and we have progressed quite a bit. Amanda said yes and so it was a plan.

I got to the barn about 6:25 with the intention of getting Ashke ready prior to the end of the first lesson at 7, then we would put a course out and start our lesson about 7:30. Amanda was going to bring Laz out to play, while still giving me feedback and direction. I got Ashke groomed and saddled, but still had about ten minutes before the earlier lesson was over, so I took Ashke in his halter to "wander" the south end of the arena. We were snorting at the flower boxes, while simultaneously trying to eat the plastic flowers, when all of a sudden every horse in the barn began to spin, snort, whinny and panic in there stall. Ashke exploded into a frenzy, and I saw the lesson rider dismount her horse out of the corner of my eye, as I was trying to calm and contain Ashke.

The other rider had her mare kiting around her in a panicked gallop, barely controlling her even with the bit. Ashke was spinning around me, whinnying frantically and trying to get away. Amanda said afterward she had gone to help another rider with Maggie (she is shod and was on concrete in the barn aisle) and when she got back where she could see the arena, both Rain and Ashke were on their hind legs, striking at the air. The hail hit the side of the barn and I was praying to all the gods that this wasn't a tornado. The hail passed and then we could hear rain. Two minutes later all of the horses calmed and the storm was pass. I think it was a microburst that the horses could hear coming. It hit and was gone in five minutes. Scary shit though, let me tell you.

So, another friend held Ashke as Amanda and I set the course. We had sidepass poles, the bell corridor with L shaped reinback, the livestock pen, garrocha and bull (but no ring - it was still at home), gate, single slalom (only four cones since we needed to leave room to be able to warm up around the outside), and jump. Mind you, we've schooled the livestock pen a couple of times, and we routinely use the cones in the single and double slalom for training tools, but the rest hasn't been ridden in months.

We were joined by Amanda's sister riding Maggie, and a couple of other barn peeps showed up to enjoy the obstacles. It was fun. 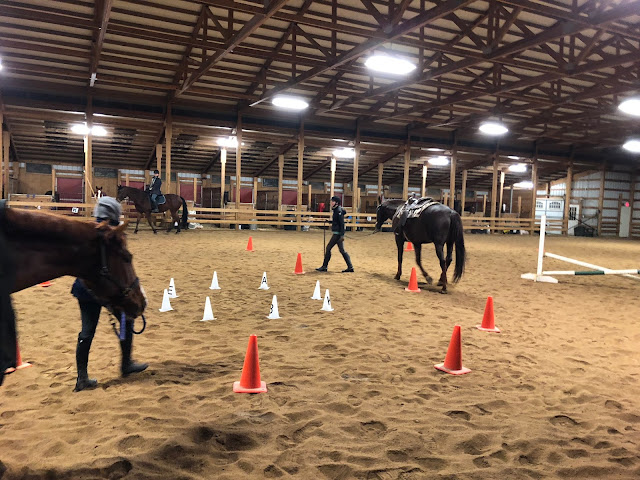 The livestock pen, jump to the right and the barrel with garrocha to the left. 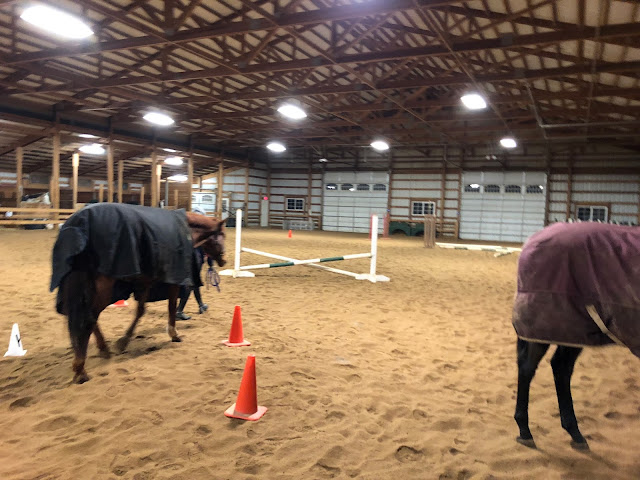 The jump wiht the gate at the far end in profile, the bell corridor to the right at the end of the horse's butt. 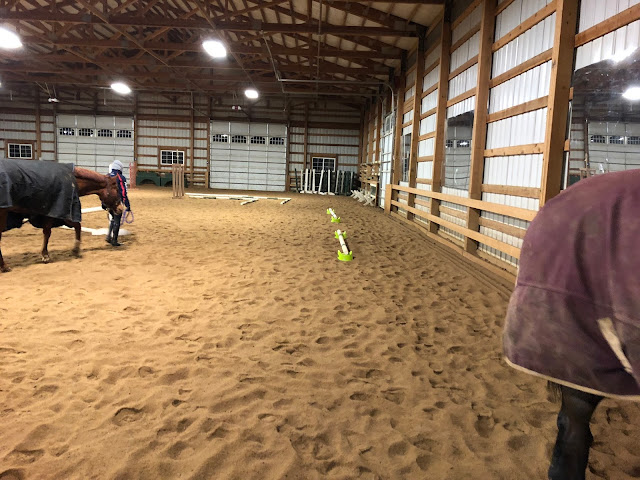 Sidepass poles in a line, with the L part of the Bell Corridor at the far end.

I warmed up Ashke at the walk first, and then added some canter. He felt amazing. I hadn't been on his back for a week and other than being just a touch silly about the baby gate corraling the arena drag, he was solid. We didn't do a lot of trotting. We are at the level now where we have to canter the EOH course, so I started him working pretty quick. No spooking at obstacles. No spooking at the far end. He really loves the Ease of Handling part of WE. I think he enjoys knowing what's expected and how to do each obstacle. He loves being smart, which he is.

I was so happy that the first time we cantered the garrocha and bull he didn't even look sideways at either obstacle. We picked up, cantered past the bull and around the arena to drop back off.

We did the bell corridor next and cantered in. He broke into a trot at the opening (expecting to walk in) but the second time I kept my leg on, supported him through the left turn and then he STOPPED at the end of the corridor. Square halt. Backed easily out. He rocked that obstacle.

Last week when we did the livestock pen, it was difficult but doable. This week, he fucking rocked it. In both directions. The adjustment and extra time off showed the most when he did the livestock pen. Amanda commented the second time we went through that unlocking that SI joint was very obvious in how happy he was to do that obstacle. We schooled it a couple of times ("eyes up", "don't look at the cones since you know where they are", "look your way around the circle", "help remind him to keep his hip under him") and then moved on.

The jump was much better. I feel confident enough that I was not grabbing on and Ashke has figured it out enough that he is locking on to the obstacle and jumping in stride, without any hesitation. And he wasn't throwing his head up as he landed. I was so proud. Our only consistent issue was with Ashke. He was off balance and unsettled on the far side of the jump pretty much every time we went over. I didn't want to over stress his hind end so we only did that obstacle three times over the space of the ride. I might work cavaletti poles with a low jump at the end this week during our rides (if there is space and not too many riders) in order to help Ashke with his timing.

The gate was a slam dunk in both directions.

We worked on the side pass, making sure he was crossing over his legs in both directions.

The single slalom was also very solid. He understands where the transitions should happen and we are working it through the walk. We do serpentines every ride, so he should be very good at this.

After schooling the obstacles, Amanda set up a small course and we rode through it. I had her sister video it, so I could share.

I was out of breath but so damn proud of my horse.

When we were considering the course, Amanda and I both thought the line I had selected for the approach to the livestock pen would work, but it did not. I should have "walked" it, but I wasn't going to get off my horse to do so. The angle was wrong and you can see from the video that he flipped his lead going in and then was very off balance. Although a week ago, halting and restarting the canter was impossible for Ashke and last night it felt easy. I should have thought out the approach better. Next time I would transition down, do a turn on the haunches and picked up the lead I wanted before circling the outside of the livestock pen. It would have worked better.

I also didn't think through the drop off the pole to the single slalom very well. I was thinking we would enter it from the other side, but that didn't happen. That is why there was a few walk steps at that end of the arena before we picked up the canter for the slalom because I was trying to figure out what I wanted to do.

And you thought Working Equitation was easy. HA!