I was going to share details of my trip to Germany, but to suffice it to say, it was a working trip, I didn’t ever really adapt to the new sleep schedule, both myself and my coworker were exhausted so tourist type pics are pretty much non-existent. Düsseldorf is known for its shopping district, which we visited one night, but all of the shops are US products at a higher price. So, not really that much fun. I did visit the Apple store though, because it was there. 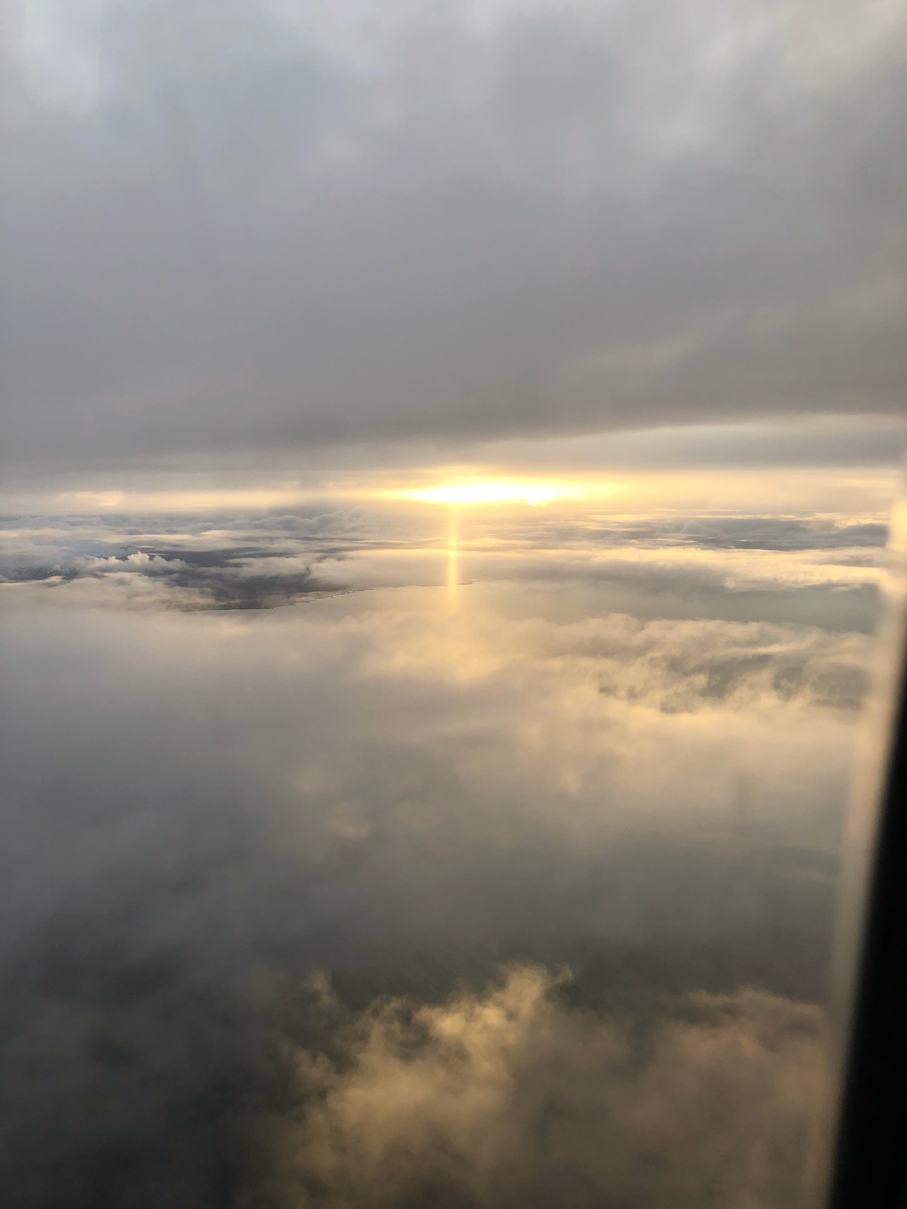 Flying into Reykjavik, Iceland is magical.
I also have a post coming about Ashke, but I will wait until I see him before posting.
So, instead, I want to regale you with a story about my dogs. I got them three days after Spike died, because I absolutely could not handle the emptiness of the house. While others may choose to wait to bring a new dog home until their grief has subsided a little, I went looking for more dogs. It helped ease the emptiness, plus it really did bring life back to Guiness. She lived another two years with the job of helping raise the pups. (She taught them all of her bad words, which Lily still uses. I’m pretty sure one of the sentences is “keep moving, motherfucker.” Although neither of the pups ever mastered the cussing while resting their chin on the windowsill.)
There are several things that are unique about our dogs: they were raised in a litter of 13, so neither of them got a lot of one on one bonding with people, they were raised in the house and had NEVER stepped foot outside until we took them home, they were twelve weeks old with no potty training, and they all had really stupid names so they really didn’t know who they were. They were terrified by being removed from their house and shook the entire ride home.
The very first thing we did was stop at a PetSmart and pick out collars for them. We took them in with us (and Guinness who we had brought to see how she would react to two new pups, which she got all wiggly about) and tried on collars until we found one that fit. I think the simple act of securing the collar around Skittle’s neck for the first time was for her, the moment she became ours. 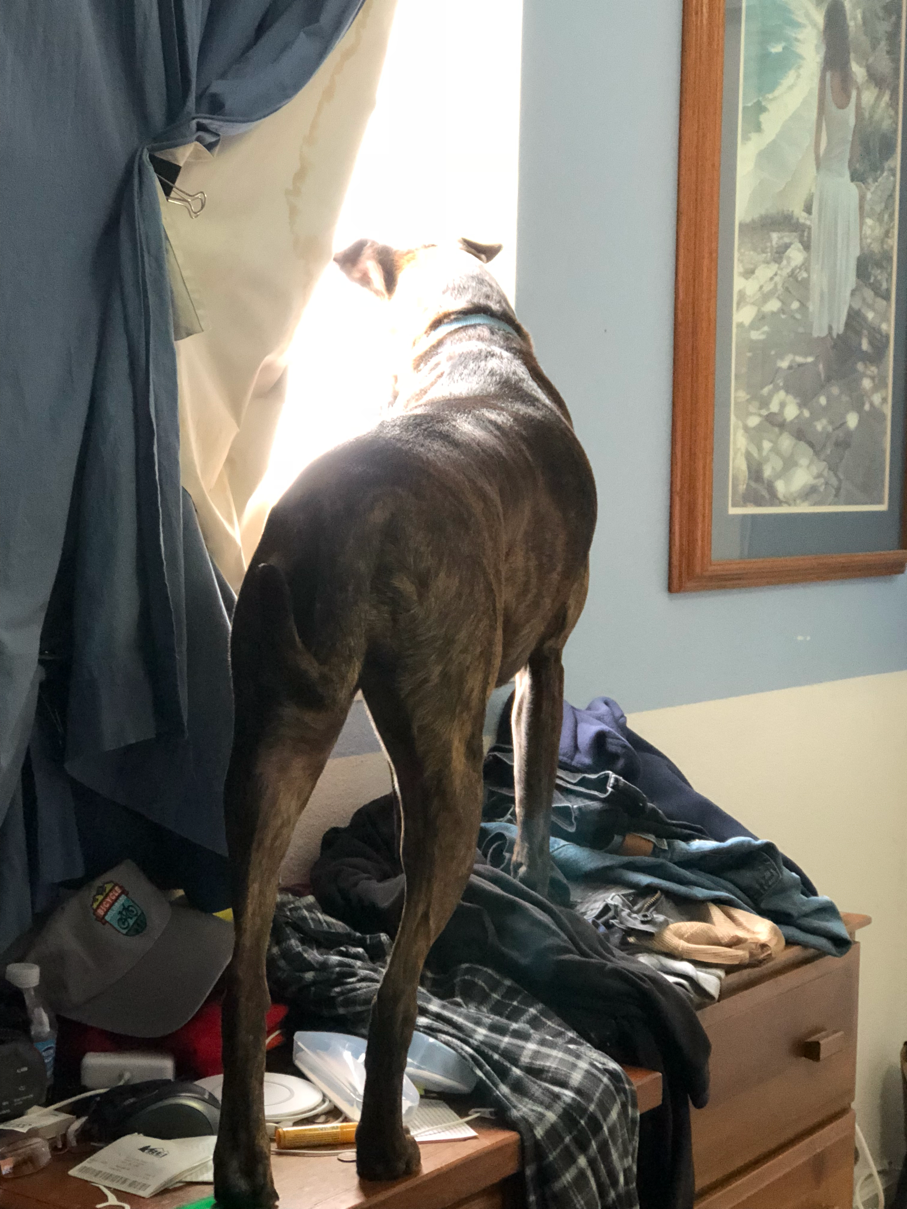 Skittle’s favorite pastime is to study the neighborhood below us from her window perch.
The past five years has been a joy and a real learning experience. It took a long time to get Skittle potty trained, but we were calm and patient and never got mad at the accidents. She occasionally has an accident in the house, but it is almost always our fault (left too long, wasn’t walked right before we left)  and she is always sorry. Thank god they both stopped chewing everything since we ended up losing two iPhones, two pairs of Oakley sunglasses and a Supersized beanbag chair, along with a lot of low ticket items.
Back to the collars. We only take them off when we give them a bath, but that fifteen minutes of wash, rinse, towel dry and reattach collar is the longest fifteen minutes of Skittles’s life. She stresses so much until that collar is locked back around her neck. 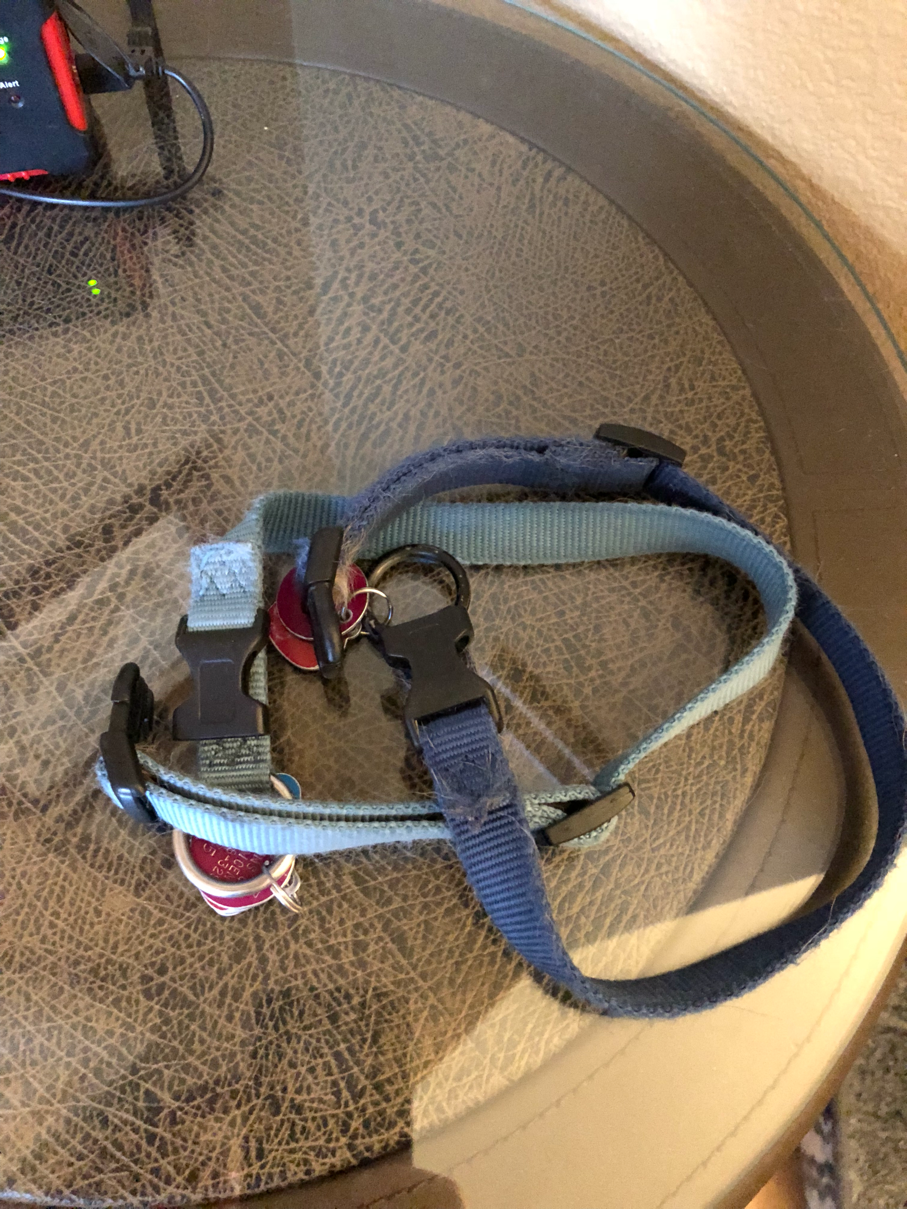 She was not happy I took them off to take a picture. Lily Bear cuddling on the end of the chair 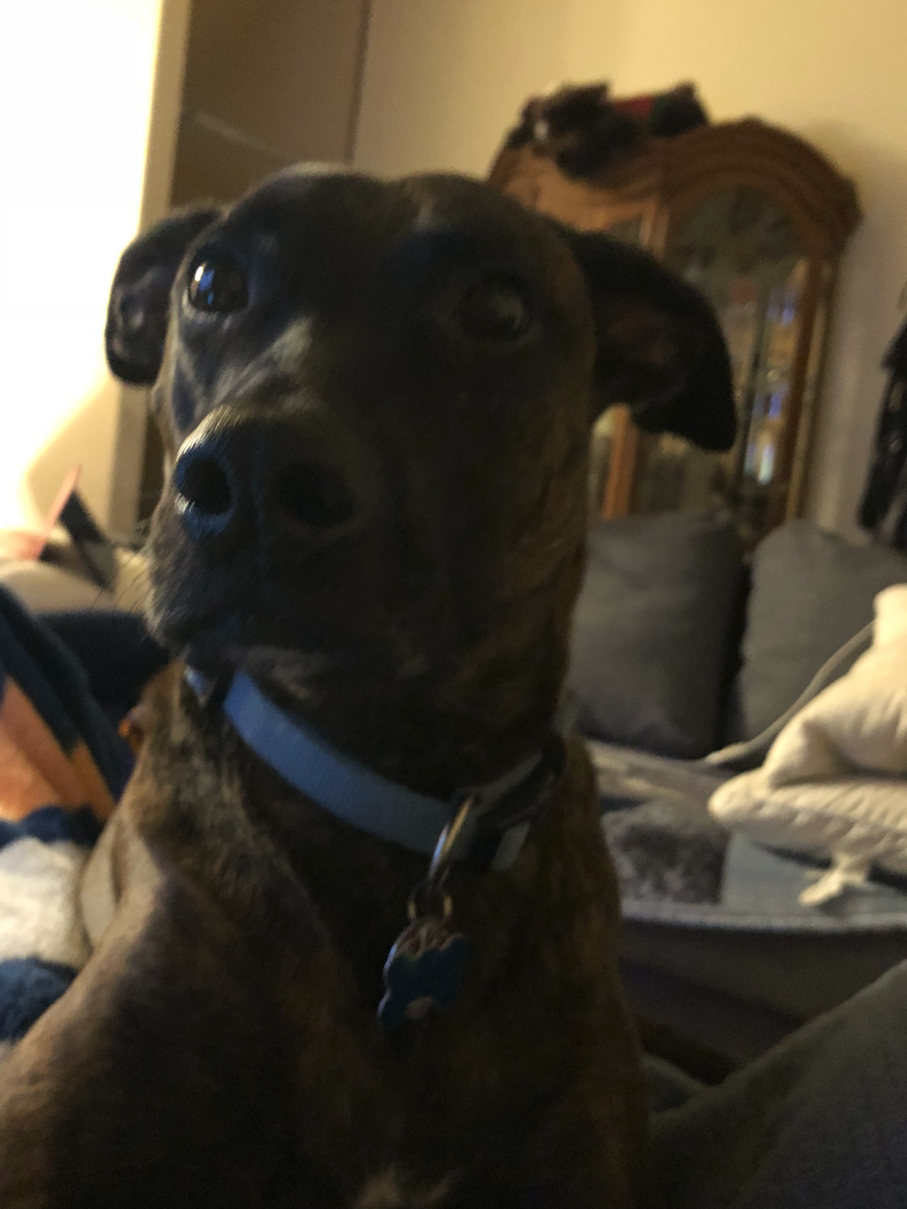 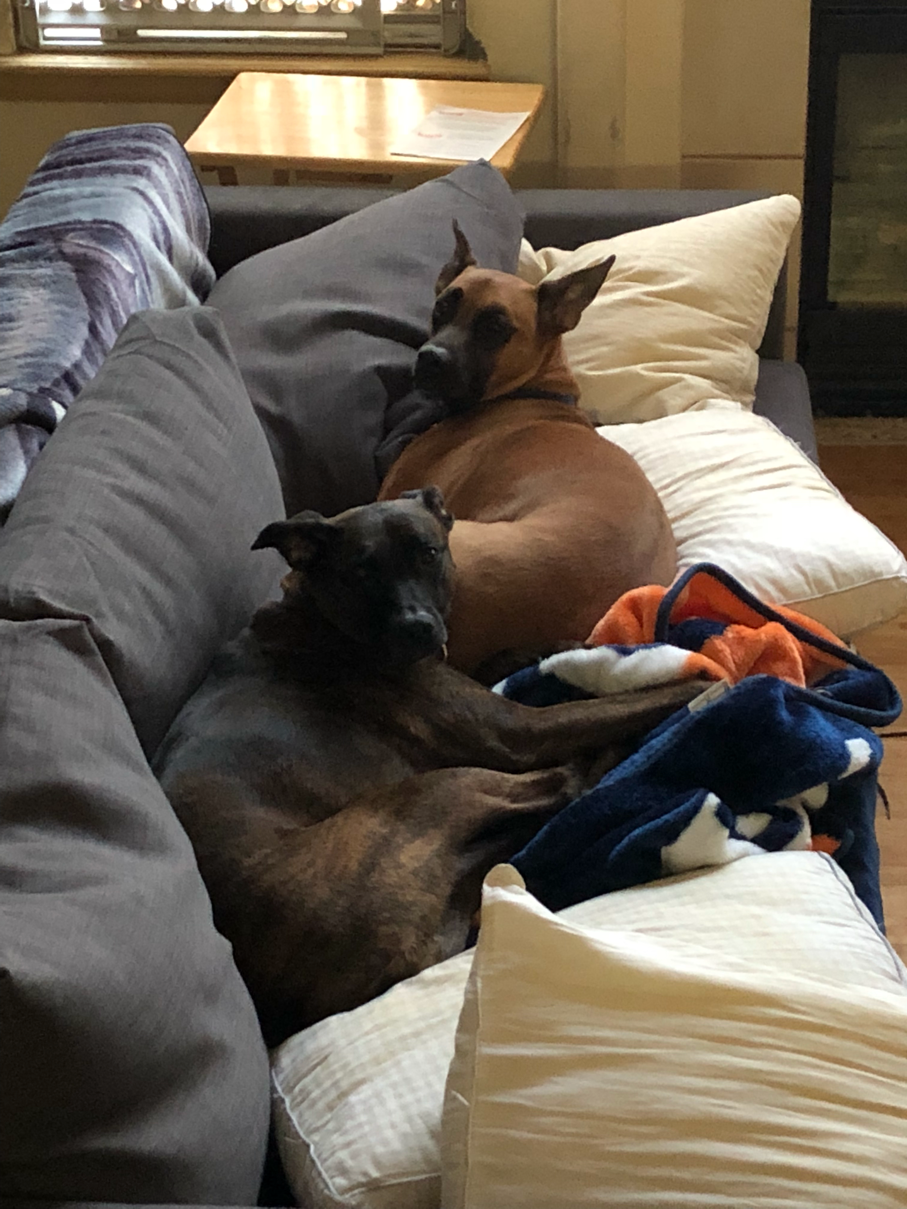 They have such a hard life
Posted by Cricket at 8:17 AM