I rode on both Saturday and Sunday. We focused on canter work with a little bit of trot added in. Saturday there were other horses in the arena and we mostly worked in the "safe" end on 20m and 15m circles. I was very pleased at the end of the ride with the work we had done. I was really sore, but fairly happy.

Sunday was another story. For most of the ride we were in the arena by ourselves. Ashke was a jerk. He spent our entire ride spooking from the "scary" end of the arena. Still. I know its not real, because he isn't spooking in hand or at the walk. He gets "spooky" when we are working through the canter and at the trot. Or when the work gets harder. I think he was probably a little sore on Sunday, considering how I felt on Sunday, and neither of us was working through our back very well. But I persisted.

So, by "spook" I mean he keeps an ear on "the corner", counter bends away from that end of the arena, becomes "bouncy" and stiff legged through that corner, hollowing and rushing. Sometimes a jump forward or a stiff legged bounce sideways. None of it is huge or life threatening. Its just fucking annoying as all get out. We have been riding in this same arena, with the same things in exactly the same place for two years, one month and 17 days. We have some days where the annoyance is less and some where we are all out fighting. Sunday was an all out fight day. I couldn't get any kind of decent canter at all so we bailed and went outside to ride the edges of the field.

That was better. I got a great trot-jog and an easy canter on whichever lead I asked for. He was very good.

Then I didn't ride Monday (too cold) or Tuesday (couldn't find the love) nights. On Wednesday, just thinking about going to the barn filled me with dread. I hate fighting over that end of the arena. We struggle enough with proper bend and rhythm that I don't want to also have to struggle with him just doing what I want him to do. I began to second guess owning a horse, it was that bad. (This hobby costs too much in time, energy and money to do it if we are freaking miserable. And I'm not changing my horse. We do this or I do nothing.) I know that thinking of our pending show in March is adding stress to my decision making process, but I had hit a wall.

See, my arena keeps getting smaller and smaller. We have been avoiding that end of the arena because of his behavior and that's not helping.

So, last night I decided that I was going to revamp my approach. No more avoidance and no more argument.

I set up two cones at the south end of the arena, with two poles midpoint between. Then an additional three cones in the configuration for the double slalom. 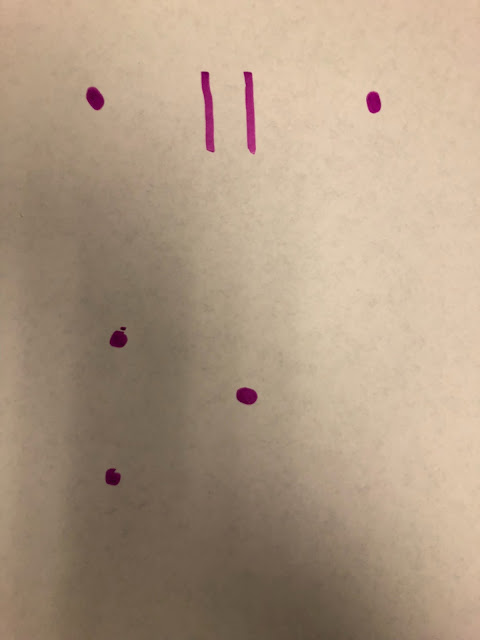 We started at the walk around the edges of the arena, which was no big deal and then walked some random patterns through the cones and the poles. Once he felt fluid, we cantered 15m circles around the cones, halting between the poles, then cantering out of the poles. He was bulgy and had an ear on the corner, but I ignored him and demanded he ride the exercise properly. He was very obedient in between the poles and halting sharply off my seat. We then did circles around the cones and trotted over the poles in a looping figure 8. By this exercise, he was much more focused on me.

Adding the two cones and poles to the far end of the arena helped give Ashke something to focus on. I'm already thinking of new patterns I can try. Next ride, I hope to do a "fan" of poles in each corner with a line of cones down the center line for a single slalom pattern.

And plans to stop riding are on the back burner. Again.
Posted by Cricket at 9:58 AM