I got to the barn a bit early, so I cleaned Ashke's stall and spread lots of shavings. Then I gave him a good groom and saddled up. My number one winter hack is working very well: I use a heating pad, folded over my bit, still hanging inside the bridle bag, plug it in and turn it on high before I start grooming. By the time I am ready to put it on him, the frostbite has left the metal and it is at a neutral temp, if not warm. Ashke opens his mouth to take the bit and immediately begins to roll the bit with his tongue.

We warmed up with w-t around the edges of the arena. Most of his shenanigans over the south end of the arena have disappeared. Mostly. Last night he got a little squirrely twice, and a slight jiggle of the bit with one finger and a tap with my inside spur put him back on the straight and narrow. We worked on keeping a nice solid contact between my hands and his mouth, while working all of our transitions. We did shoulder in and haunches in at the trot. Then played with the shoulder in to haunches out along the long side of the arena a couple of times, just to play with moving his body around.

One of the things Amanda has been having us work on is a leg yield from the rail to the quarterline, then while maintaining our bend, leg yield into a turn on the forehand, then leg yield back toward the rail, allowing enough space to turn it into a turn on the forehand, then walk off in a straight line. It was a struggle to do it at all when we first started. Now we have progressed to the point where we are working on subtlety and remaining on the bit, even when its hard and we aren't sure of the answer.

Then we worked on the 10m circle with leg yield to the rail: 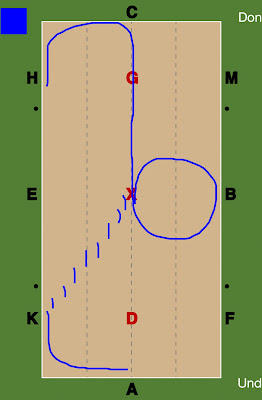 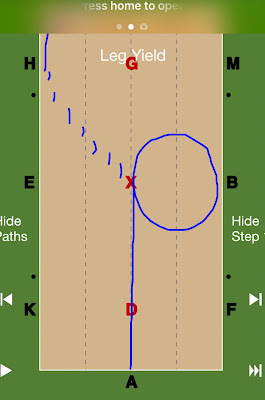 This set of exercises is ridden at a trot, one after another. Because this exercise is from X to H or X to K, it is a very steep leg yield, which has kind of set up a mindset in his head that going to the rail as quickly as possible is what is REQUIRED. This made for a struggle to get him to rethink that concept when doing it at the canter (he can't hold the canter lead correctly if the angle is too steep) which makes him compensate by moving faster. Amanda had me make the ask much smaller, mostly thigh and knee and neck rein, to keep him from trying to flip his lead. We finally had one decent leg yield at the canter without the canter falling apart, Ashke trying too hard or our speed getting away from us. Some thing to work on over the next week.

We did canter serpentines which were really solid, but only one bobble in the corner near the standards, which I reacted to by making him canter a circle there, which made his second pass through that turn much better than the first.

Amanda pulled out three cones and we rode through a couple of times in the drum pattern, starting with the right barrel first, then switching directions (the drums can be ridden in both directions this year). Ashke was able to make the circles with clean transitions as long as I remembered to look up (not at his head), look around the circle (not at the cone in the middle of the circle) and sit on my pockets (rather than tipping forward over his shoulder). After the drums, we rode the figure 8, which really tweaked Ashke's mind since we didn't move the cones, I just rode them differently. The hardest part of that exercise was the canter away from the cones. There was just all of this space and Ashke had no idea what to do with it. The canter fell apart. It didn't help that we were cantering directly at the baby gate of death. We did it twice, just to let him know that cantering into the unknown is okay. And because I have been inadvertently training him to transition to a trot after the obstacle is complete, which isn't going to go over very well when we are riding a course.

That was the end of the lesson. Not a bad way to start our year.
Posted by Cricket at 3:40 PM