When I was in Germany it was difficult to send and receive messages. I could text with J and T, which is good since T broke up with his first girlfriend while I was there (which was also good for time spent talking to him on the phone at 1 am in the morning my time). I could send text messages, but couldn't receive them from Android phones. (Bonus points for iMessage on the iPhone.) So, I was pretty worried when J went to the barn to check on Ashke and sent this photo: 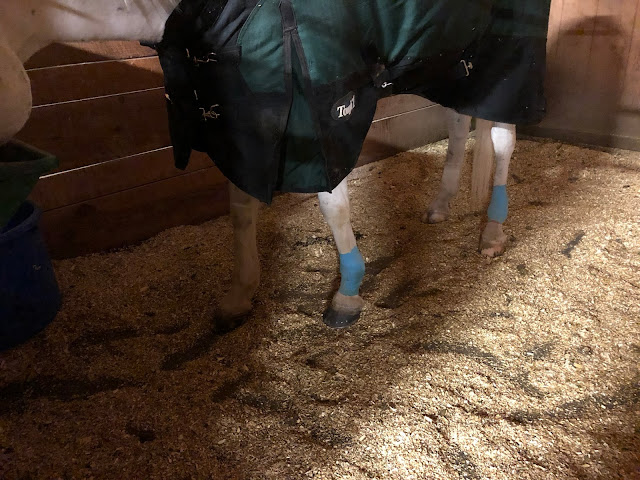 My frantic texting received no immediate response (I got all of the responding texts on Saturday when we landed in Iceland) so I turned to FB messenger. That actually worked, so bonus points to FB as well.

Ree sent the following photos. Now, mind you, these all happened on the same day within a couple of hours of each other. Also, he let himself out of his stall twice, out of turn out once, and ended up outside the barn fighting with Beau over the fence. Front fetlock. Happened in the stall run. No clue how. He was upset that Ardee was in turnout and DaVinci was in his paddock and they were close together with a fence separating him.
I need to take back the comment that he could still have Stallion qualities as a gelding. 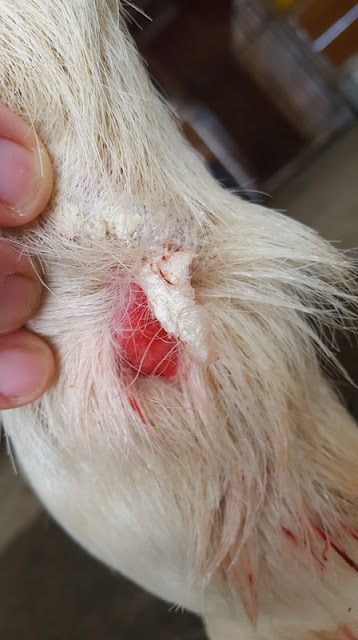 Look familiar? He kicked open the left hind again.
Over a year after it healed.
*headondesk* 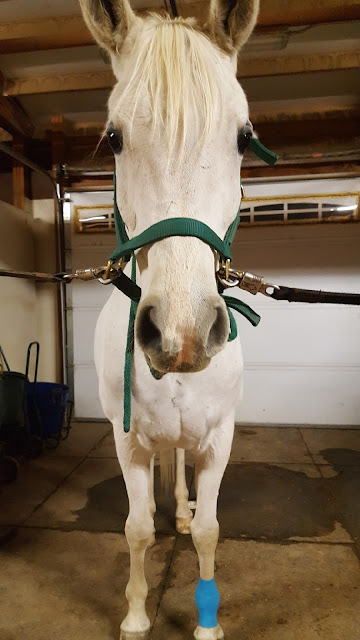 In wash stall
Who me?

Thank all the gods for great barn mates!! Special shout out to Ree for taking such good care of him- she did all the wrapping, hand walking, cookie feeding while I was gone. Amanda hurt her back the Monday before I left, and was able to do one ride while I was gone, but obviously, he was bored. And a bit pissed I wasn't around. He was completely sound even through the minor injuries, so it was just surface stuff. But seriously horse, enough.

I also received reports of him rearing, striking, squealing and bucking while locked in his stall because Ardee was being ridden in the arena with two other geldings. THE MARE IS NOT ALLOWED TO DO THAT!!!

To cure this self-destructive habit, I rode Sunday, Monday, Tuesday and have a lesson tonight. He was tired by last night and it was a push ride. I gave him a little bute for his butt (seems like he's a tad bit sore in the haunches from all the canter work we are doing) and plan on getting there early tonight to use the BOT mesh sheet on his back and buttocks for an hour before we saddle up. I will also use that time to resoak his feet to address the small bit of WLD he's got going on before it flares to monster proportions.

I cleared off all the media from my gopro and plan on having Amanda wear it tonight, so perhaps I will have some decent videos from our lesson. I'll do a ride recap after tonight.

I will also be addressing the left hind with another approach. I need to see if we can cure the itchiness he is still dealing with on that leg and get a better, tougher layer of skin there.