At night, sorry. This is the front of the main barn. It can house close to a hundred horses and we are almost full. There are box stalls with runs on either side, and box stalls down the center. 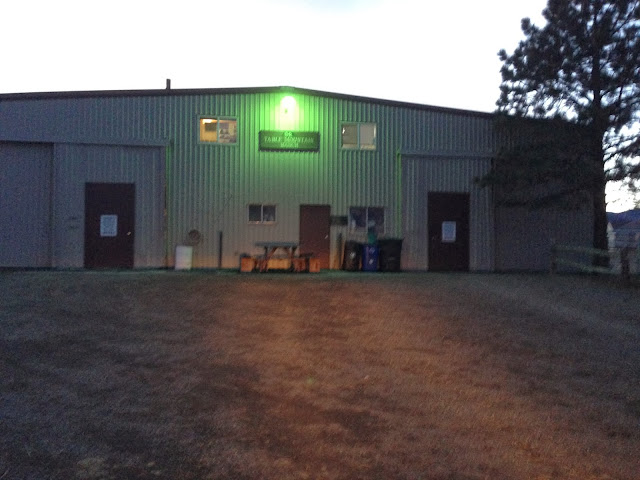 Each horse can have up to seven flakes of alfalfa or grass hay a day, plus up to six pounds of grain a day. Ashke gets six flakes of grass hay, spread out over four feedings. The stalls are cleaned daily and plenty of shavings are used. 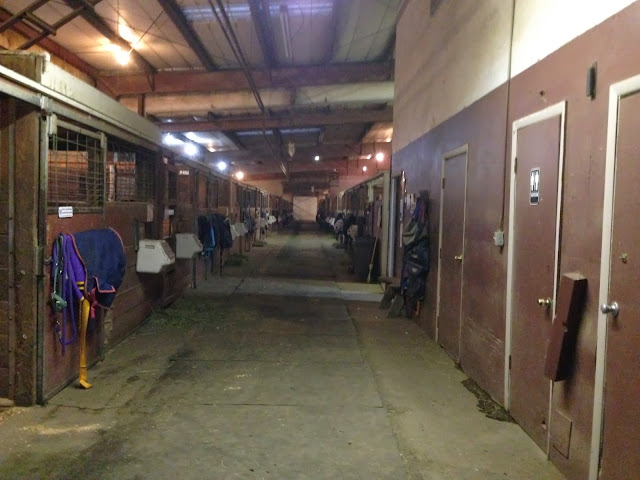 This is a shot of the hallway from the front left door walking in. There is a bathroom, which is a plus, so you don't have to go to the indoor arena to pee. Each horse has a bin for supplements and a place to hang a blanket.

2. Where your horse lives: 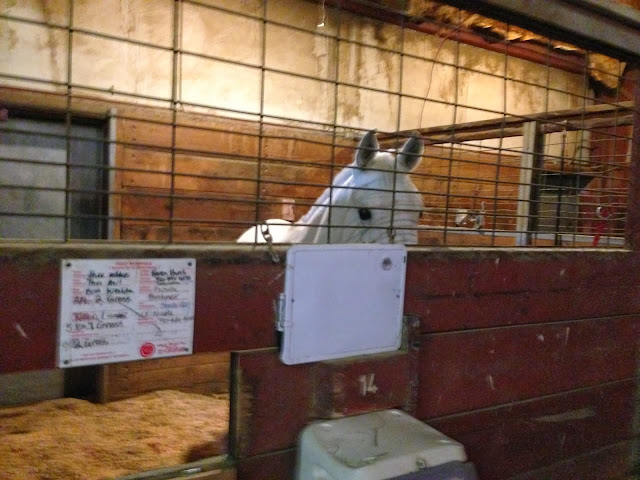 This is Ashke's stall with the door to his run closed. The barn is kept at 45 degrees during the winter, which may sound cold, but let me tell you it feels a little like heaven when you walk in from outside, especially at night. 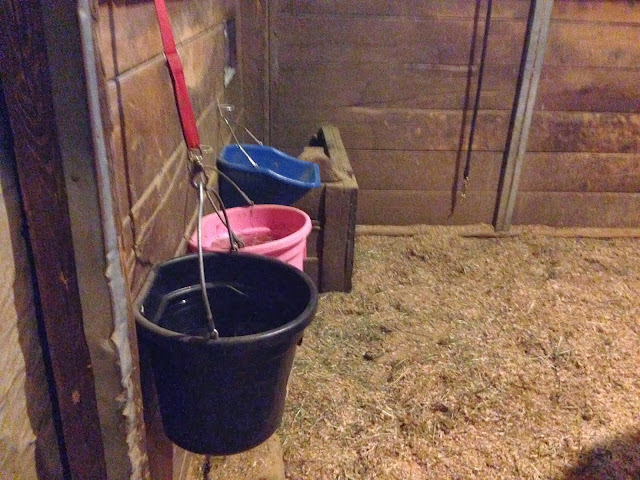 The bucket brigade. Two buckets for water. He does have an automatic waterer he shares with the horse next door, but sometimes the pipes freeze and sometimes the very old horse next door likes to dunk his hay into the waterer to soften it. Ashke seems to prefer the buckets. The guys fill them twice a day and I fill them whenever I am out.

The blue bucket is for his once a day feed, which includes a cup of moistened timothy hay, 10 ounces of Equipride, 1/2 tsp of salt and his smartpak for his joints. 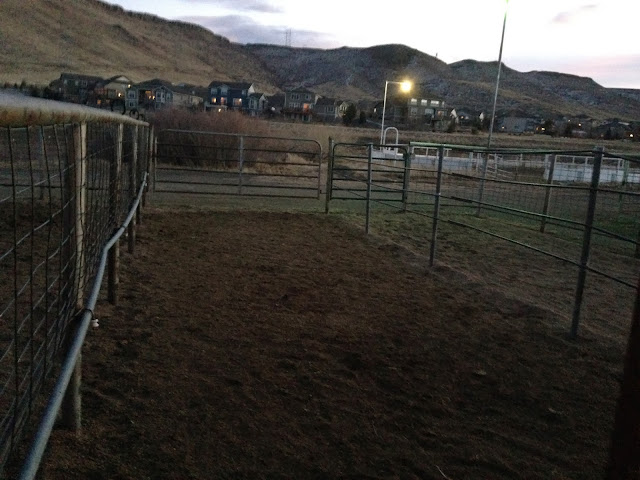 Here is the outdoor run for Ashke's stall. The run is covered in squeegee, which is slightly smaller in diameter than pea gravel, has really improved the drainage and reduced the mud. He loves playing over and under the fence with Fool and Cassini. 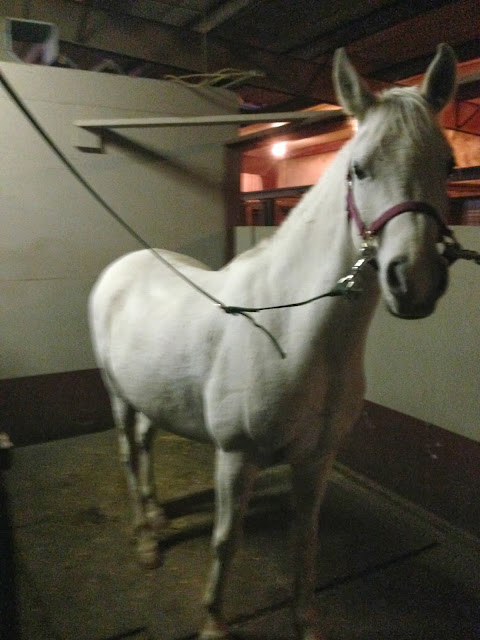 This is the grooming stall right outside the tack room. There are three in the middle of the barn, three at the front of the barn and two at the far end of the barn. They are working on putting in another one at the far end. It still isn't enough some days. 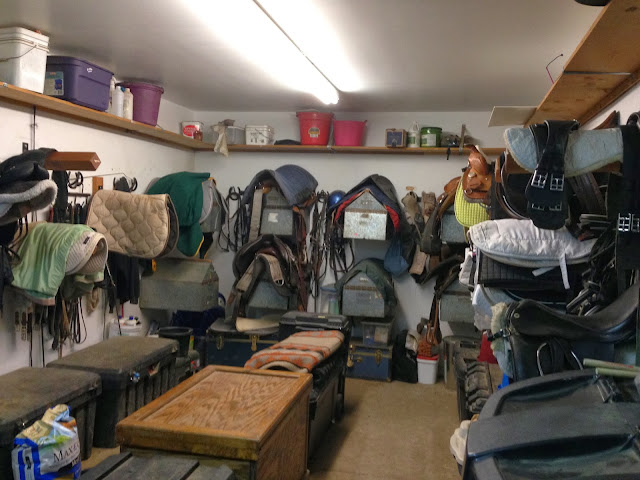 Each trainer has a tack room for their clients. This one, which I am in, is for Cassandra. In addition to the four trainer tack rooms, there are two other tack rooms for the rest of the boarders. 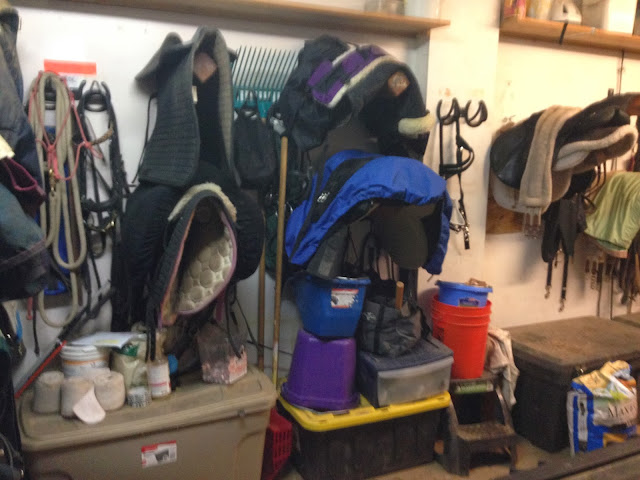 This is my area and N's. My trunk is the one with the yellow lid and that space is actually much more organized than it was two days ago. We can use the shelf above the gear to store stuff, which I might need to do. It still looks like a freaking mess. 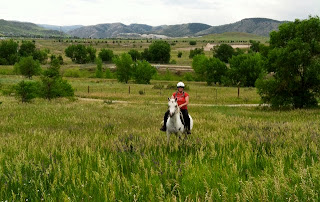 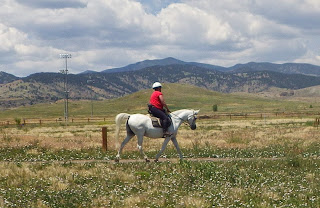 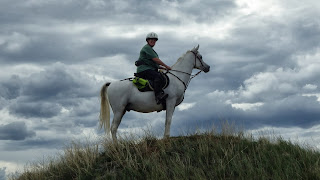 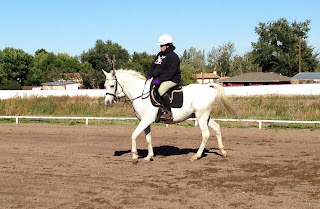 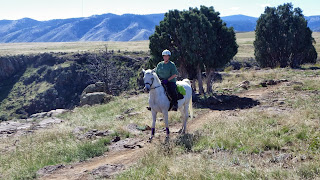 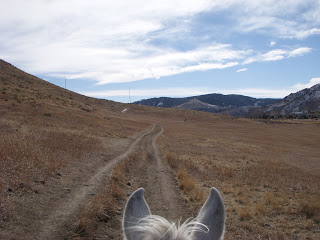 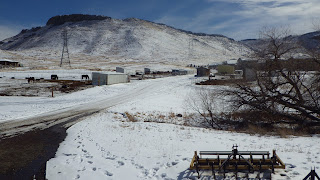 Upper paddocks for the outdoor horses (#1) and North Table Mountain 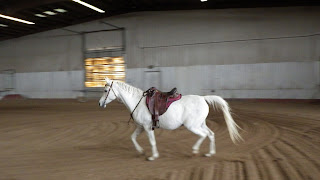 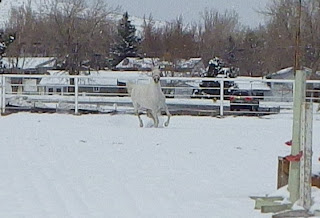 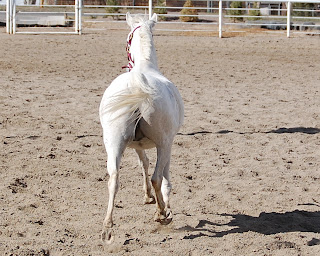 More of the outdoor arena. And flying horse butt.﻿

1. Feed four times a day. I think this has been the number one reason we have had no digestive issues (the C word) since we moved in.

2. The Indoor Arena.
This was the primary reason for searching for a new barn a year ago. I want/need to be able to ride after dark in the winter. As long as it's not too cold out, I have that luxury all winter long. I can also take lessons during the week at night, when needed.

3. The access to trails.
This was the second reason for moving.
Posted by Cricket at 9:14 AM