It is tradition. Every year in January, we go to the National Western Stock Show. This year made year 17 without missing one. T has been going since he was less than one.

NWSS started a very long time ago. It is a traditional stock show, meaning all kinds of animals end up there: sheep for the shearing, chickens and goats and rabbits are shown and sold for breeding stock, horses are shown and auctioned and sold, and riders from all over the west come to perform. There is Grand Prix and Gambler's Choice, a Wild West Show, Mexican Rodeo (complete with matador and really pissed off bull that I saw take apart a couple of vaqueros, knock out the matador, destroy a line of fencing while trying to take apart the camera man behind the fence, and gore a cow they had turned out into the arena to distract the bull. Not really a lot of fun, but a lot of action), Superdogs, and an evening (or two) with horses. It starts and ends with cattle being shown and sold, usually to some fancy pants restaurant who is willing to pay $70,000 for one steer and send the owner (always a high school student) to college on the proceeds. Of course, it's no wonder the restaurant charges $50 a steak, when the damn thing cost so much.

Our favorite part is the Hall of Education. It is a huge building with a multitude of vendors. Alas, the multitude is thinning and a lot of the vendors are the same ones for the past 17 years. It certainly isn't as stimulating as it used to be. We did, however, manage to watch some Western showing at the Events Center, see a couple of people from the barn and say hi to Cassandra. Then we watched fly ball, which we think our LandSharks might actually be good at. It was free day today, so we took time off and played hooky with the boy. 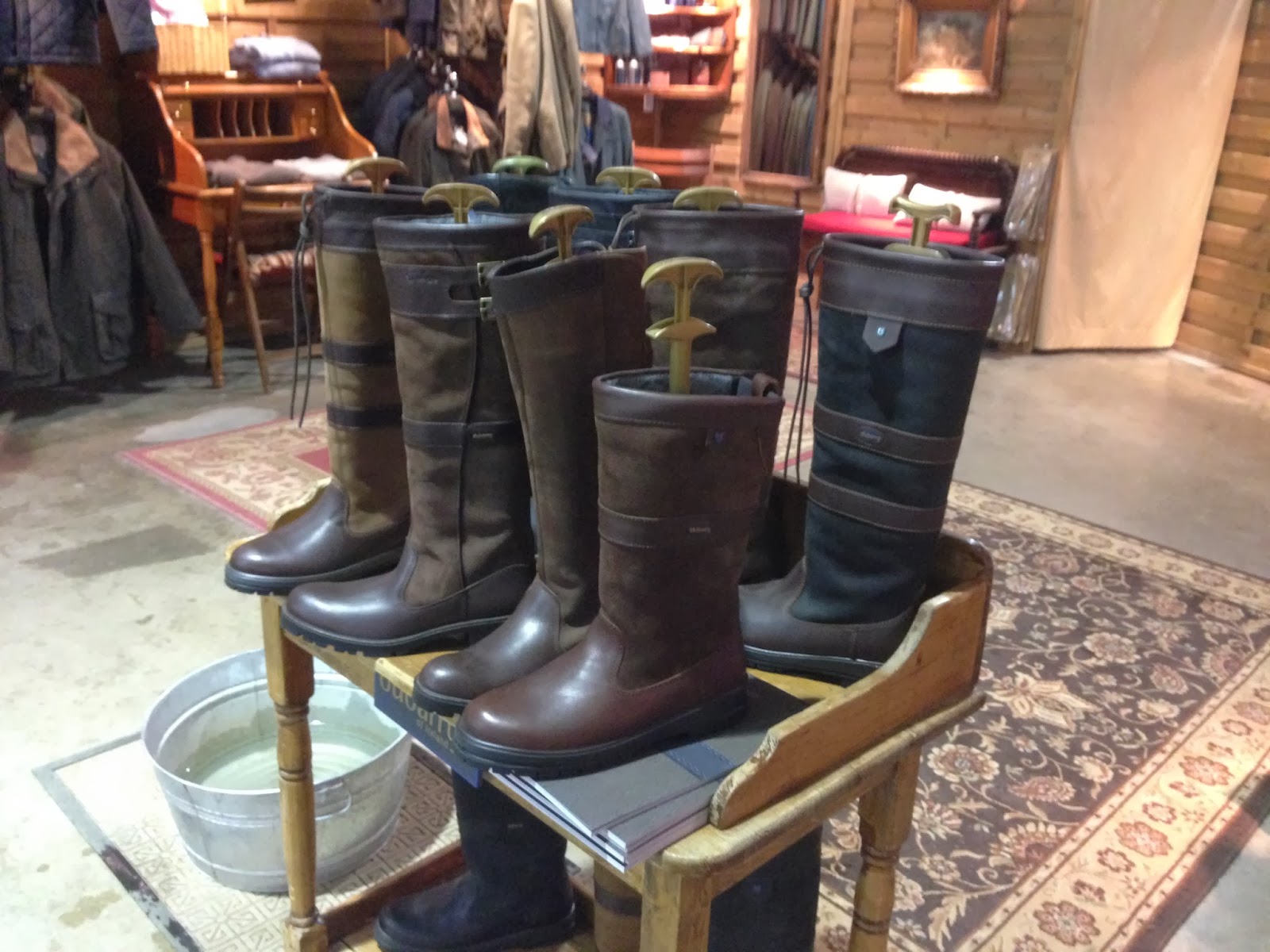 Oooooo. Looky what is new this year. No price listed so I knew better than to ask. 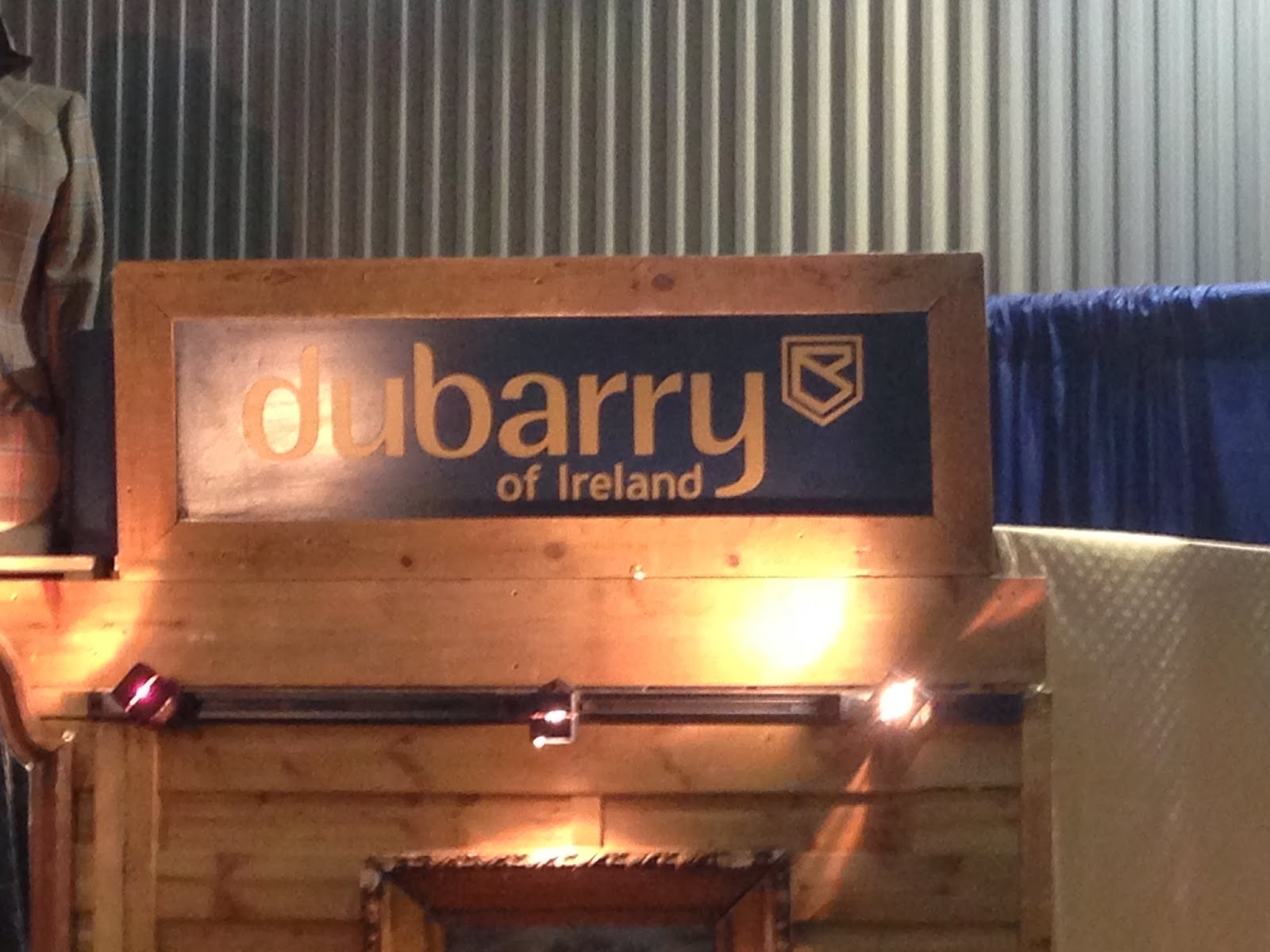 Pretty cool shop, but way out of my price range. 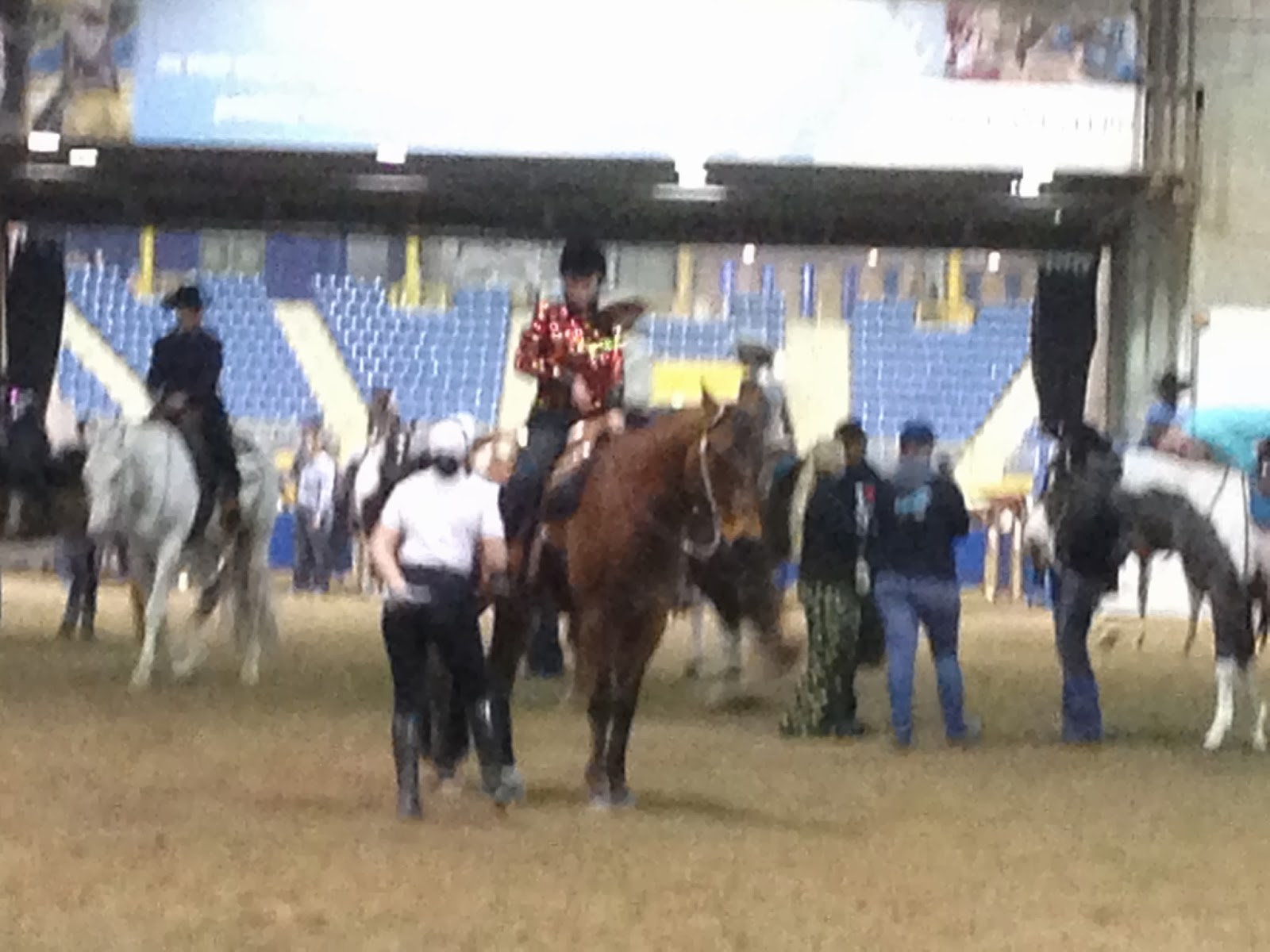 Cassandra talking to her student, who is really sparkly.
They had a bad morning. Someone stole a saddle from a locked tack room.
The girl riding had to borrow one in order to show today. 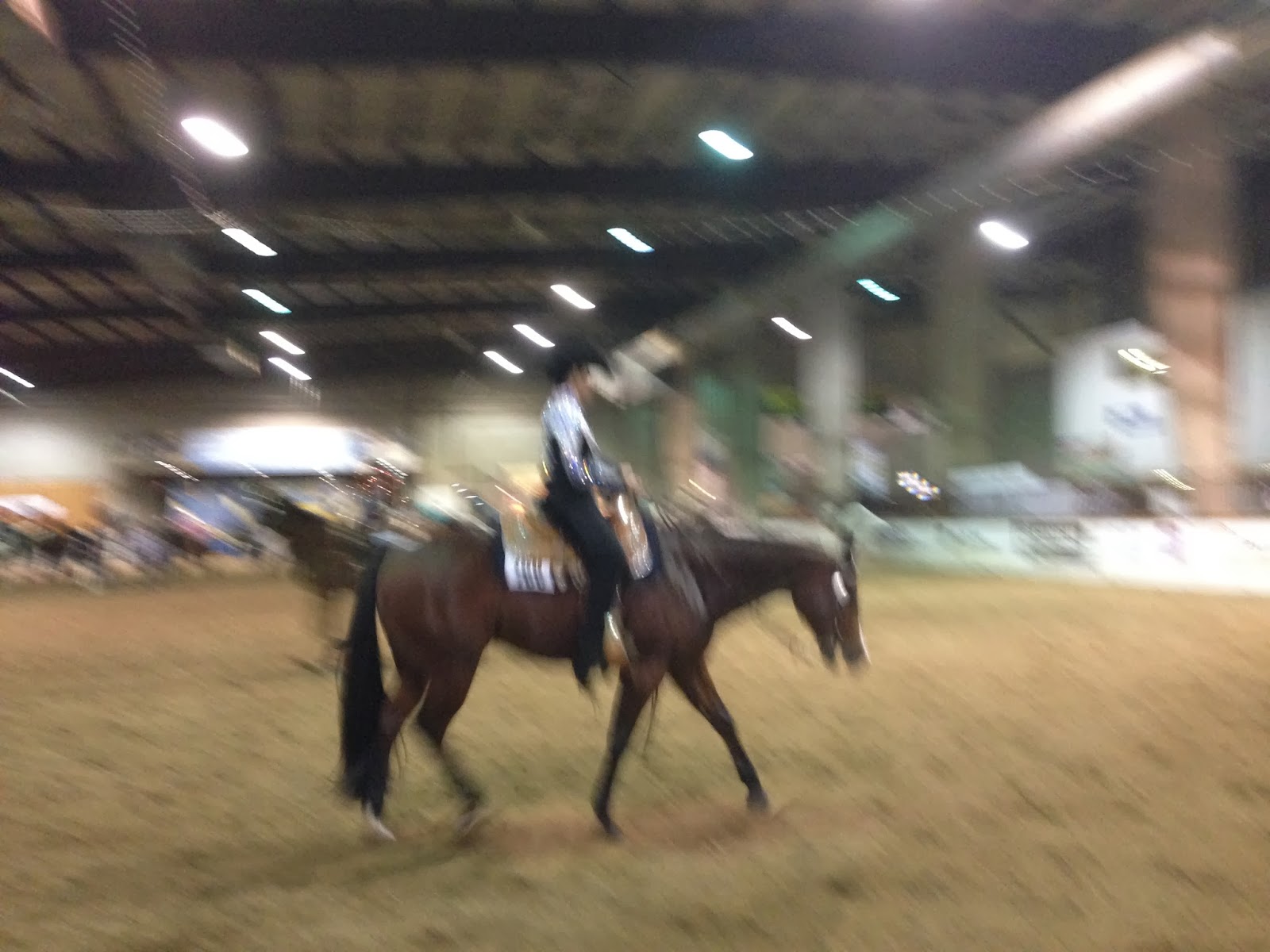 More sparkly on a horse that was being ridden in an exagerrated gait. 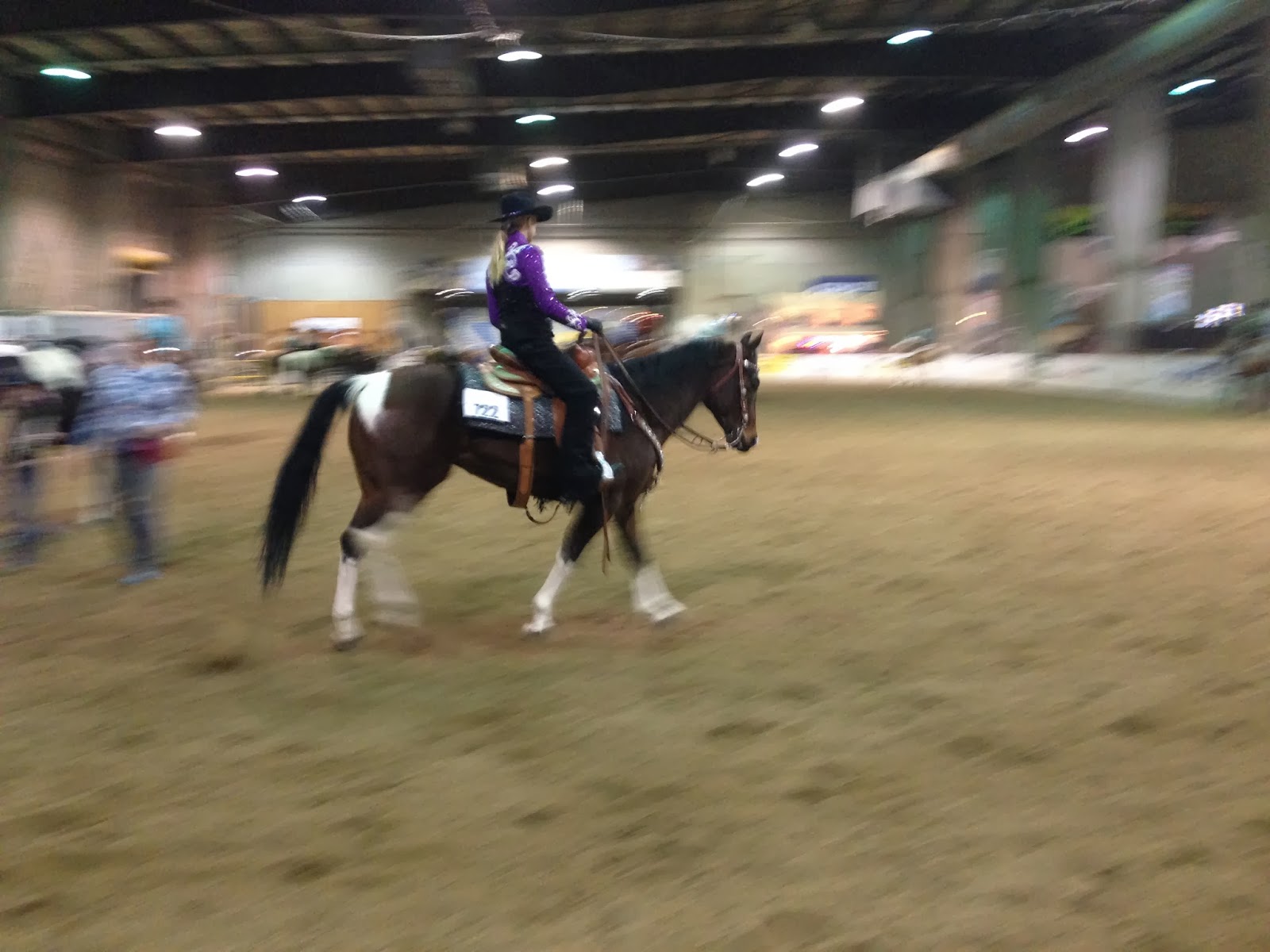 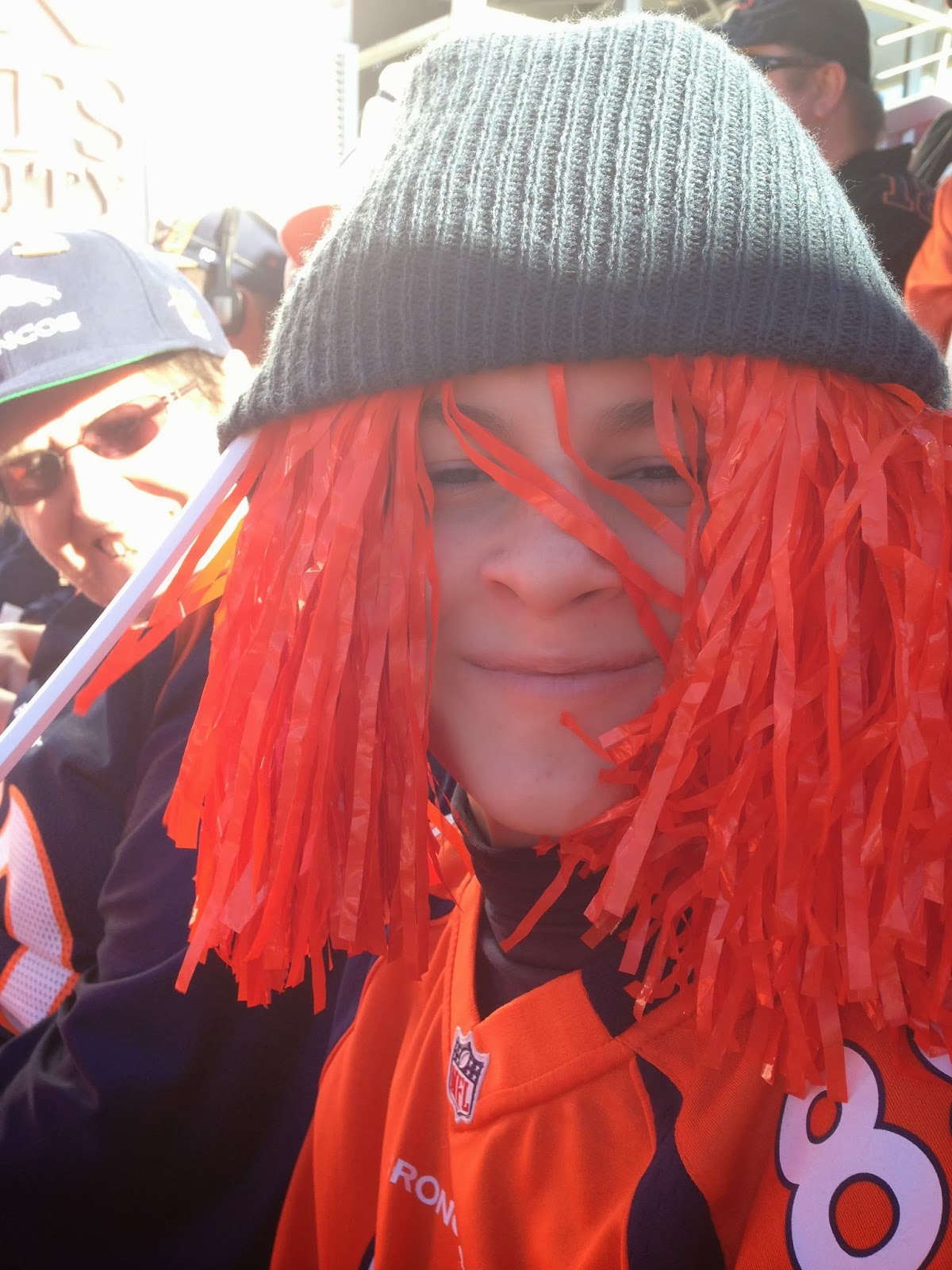 And so you all know why I haven't been riding: T at the AFC Championship Game.