Today was the day I met with the Saddle fitter. I am excited and somewhat hesitant, mostly because I was so sure we wouldn't find a saddle that fit on Ashke that I felt comfortable in. We met Bev at 1 pm at the barn and Nicole, who only wanted a saddle check, went first.

Nicole is meeting with Bev again tomorrow night, because the Prestige saddle she bought four years ago absolutely won't fit Cali. Nicole was not happy, but she knows how important having a well-fit saddle is, especially if she ever decides to show. 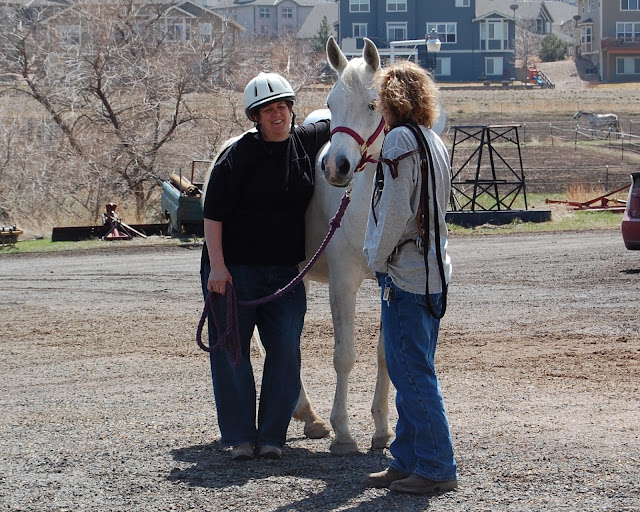 Ashke seemed pretty interested in what was going on. 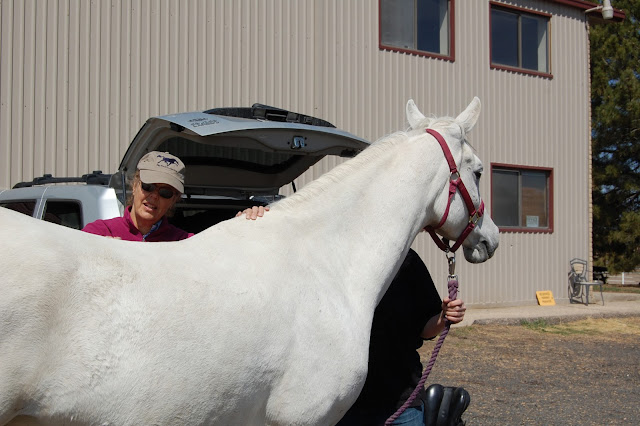 Bev, from The Tack Collection, making her introductions to Ashke, who was a little hesitant at first. 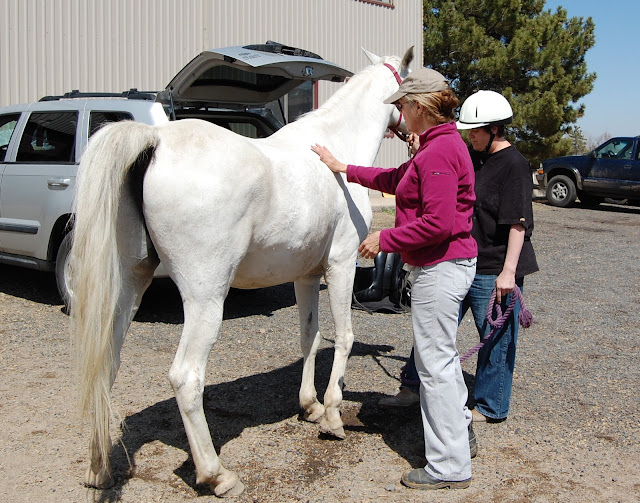 Bev checking the other side. She explained that there is a spot in his back where the muscle is atrophied, which I assume is the spot Diane wants him to strengthen and improve by using the balance training system. 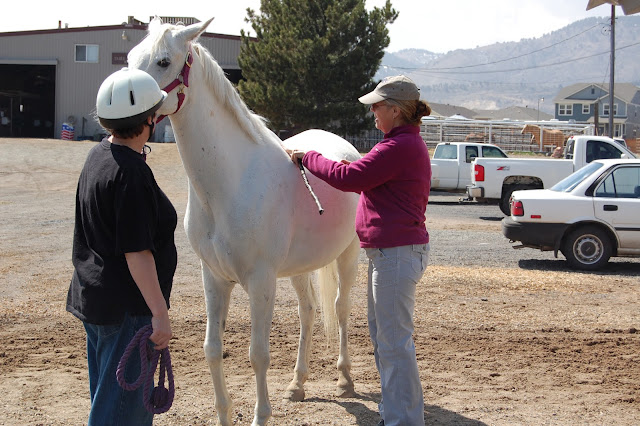 Bev used a flexible marked stick to measure his back from withers to croup. It had nifty marks in it that she marked on his back in blue chalk. 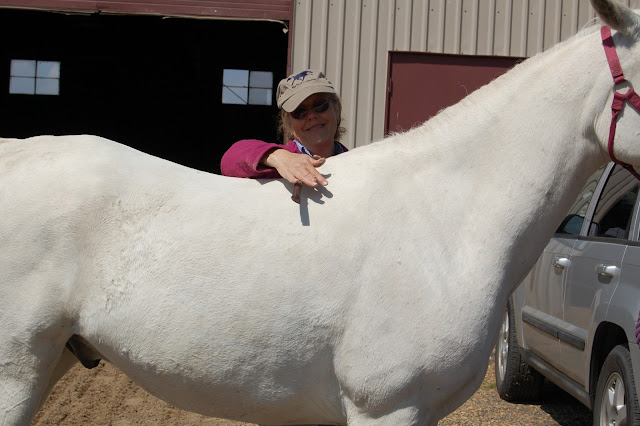 Bev then used the flexible stick to measure the shape of his back at each mark. 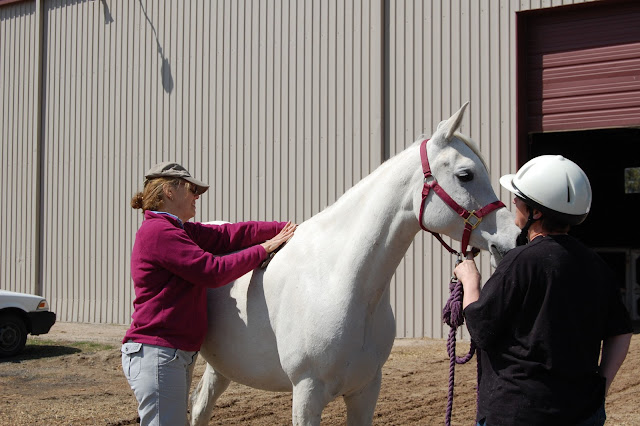 She made sure the stick completely identified the shape of his back on both sides, and then she traced them into her book. 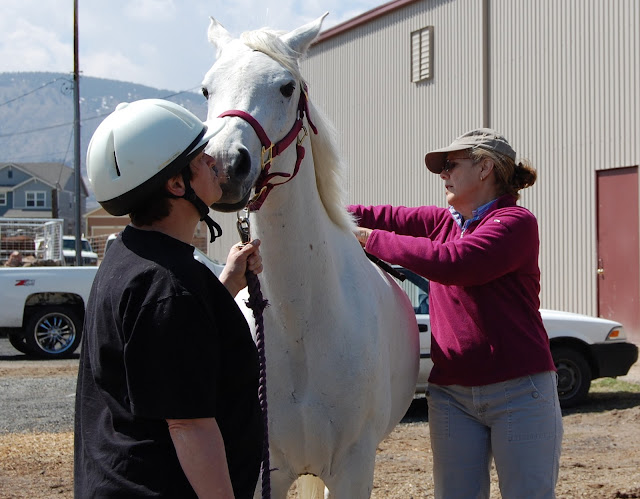 I know Ashke looks upset here, but really he was giving me kisses. He was very relaxed with Bev by this point. 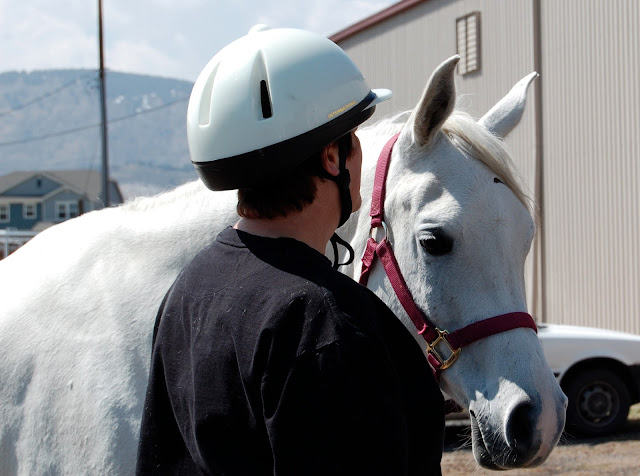 Ashke was pretty relaxed. He kept reaching out to Bev, like he had decided she was okay. 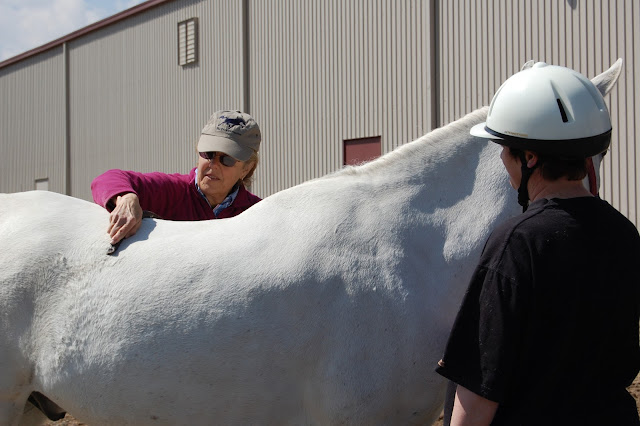 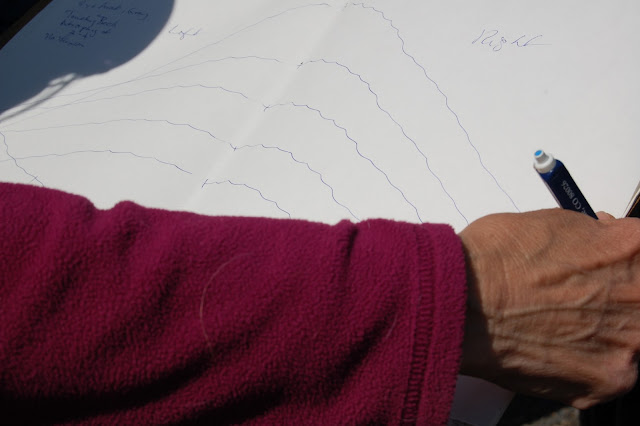 You can't really see it, but the left side of his withers really tails off. He is much more robust on the right wither and almost has a hole on the left. I told Bev I thought it was because he was using his right shoulder and left hip to compensate for the right hamstring. It was interesting to see the obvious effects in the measurements she took. It also gives us a record to compare to if we have issues in the future. 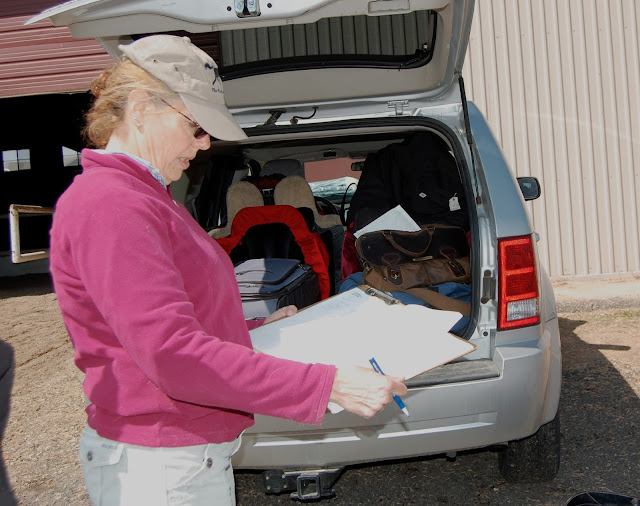 Bev explaining what she was seeing.

Time to try the saddles. 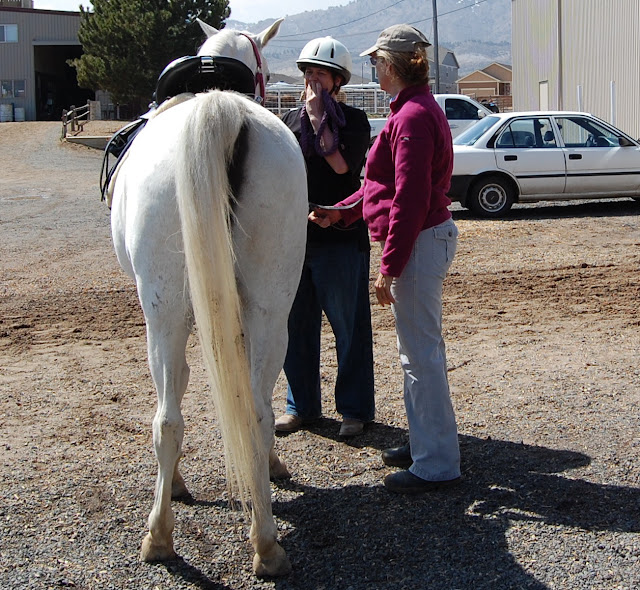 The first saddle we put on him was the Prestige Trekker Land saddle. It was used, but in great shape. It has a flex tree and fits better with a rider in it then it does without. I wasn't real sure about this saddle, because it looks really different from what I was expecting. 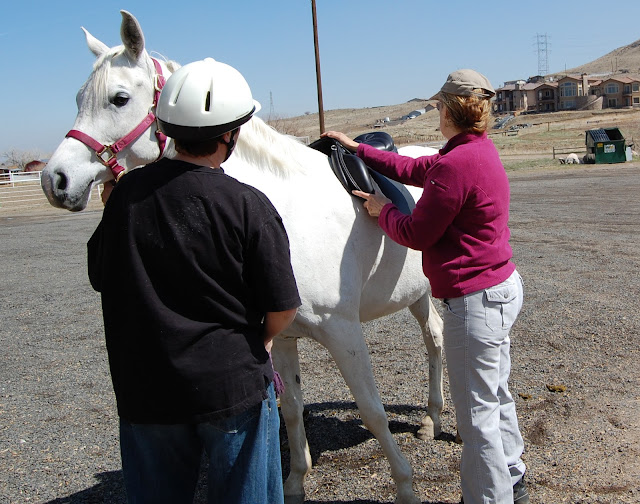 The second saddle was a Selleria Equipe Emporio Endurance saddle. It was very small with a very flat seat. I wasn't sure about that saddle at all. 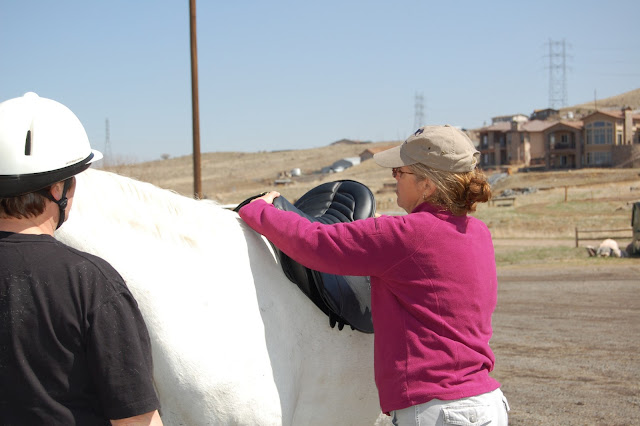 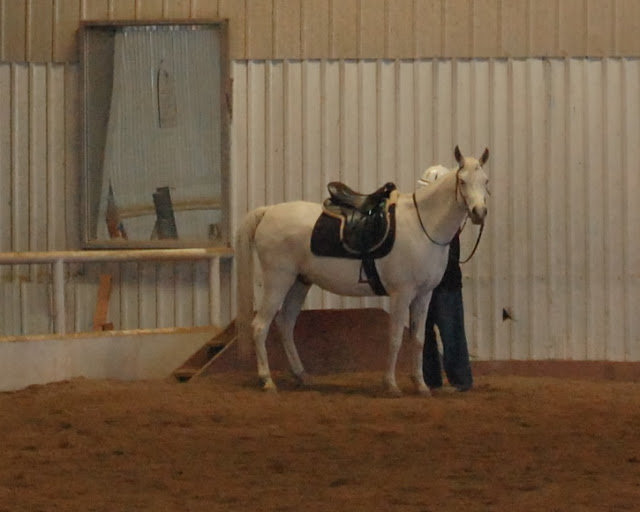 We started with the Trekker Land. It was cinched up with a dressage girth and when Bev was first tightening it Ashke was upset, but by the time I finished tightening it at the mounting block he was completely passive. That boded well, because it told me the saddle wasn't pinching. 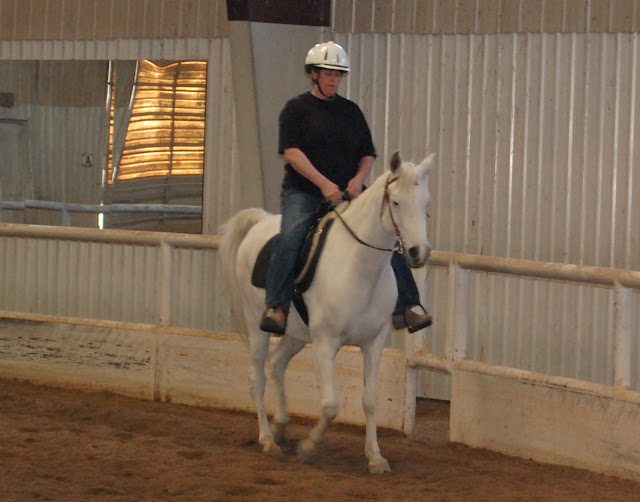 The saddle was very comfortable and I felt very stable in it. Ashke seemed to like how it felt. We walked, trotted and then he lifted into the smoothest canter he has ever had and it was like riding on air. The Trekker Land is built on a flex frame and the seat is suspended on webbing to help eliminate and disperse the energy in the seat. 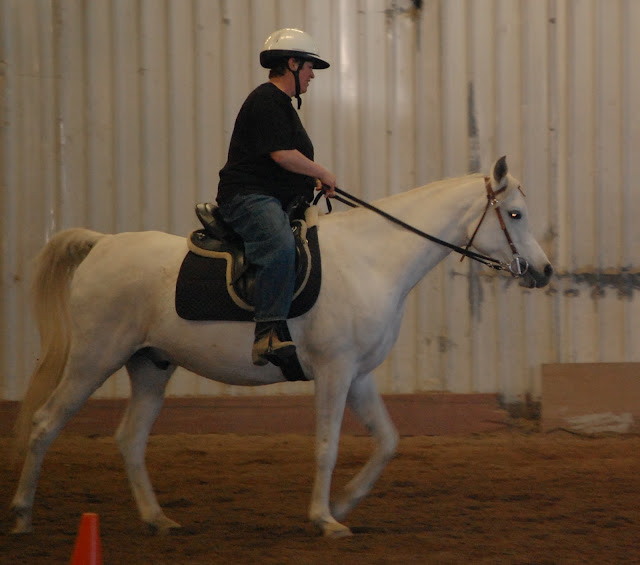 The saddle is modeled after an European Calvary saddle and it felt like it was holding me in place. I could see Lipizzan riders in a saddle like this one. Nicole said it held me much more upright, with a good angle to my leg. I tried posting and could do so without any issue. It's something I will need to work on, however. 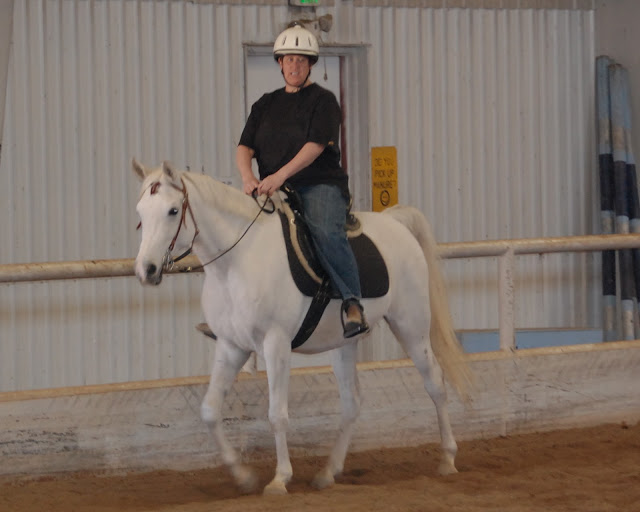 At the trot, Ashke lowered his head and flexed at the poll. He was reaching down and forward toward the bit. 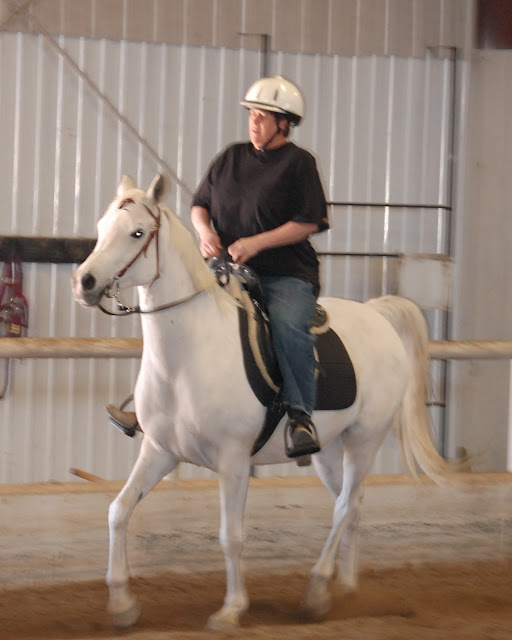 The canter to the left was so easy. He didn't pull at all and when I asked him to stop, he did so without me having to use the reins. He took my cue from my seat. 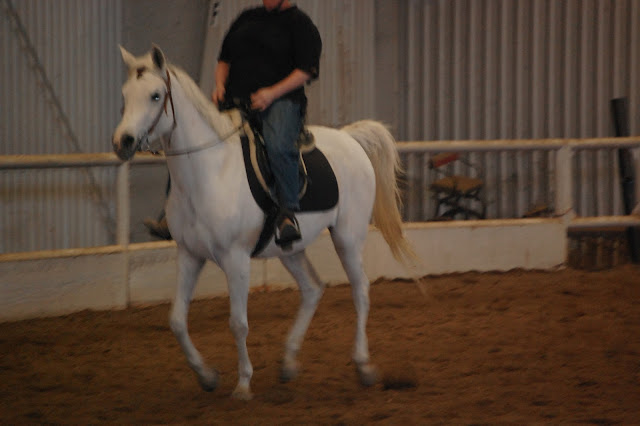 When we turned and went the other direction, to the right, he was hesitant to pick up the canter. It took a couple of tries to get him on the correct lead and the first full circuit was rough. The good news was I dropped a stirrup and was able to pick it up without looking or stopping. After about a circuit, something seemed to click and all of a sudden it was easy and smooth and he felt balanced and we both relaxed. It was the first time ever in that direction. J, Bev and Nicole all said they could see the ah-ha moment in his face when he realized it wasn't going to hurt him to canter. 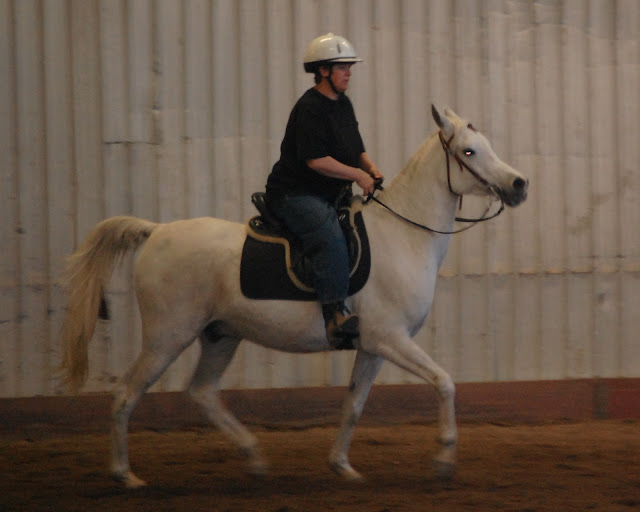 It had been ten days since the last time I was on his back. We did not have much warm up. There were zero issues. He did everything I asked him to and didn't so much as turn a hair. I had no idea how much of an impact a bad saddle could have. 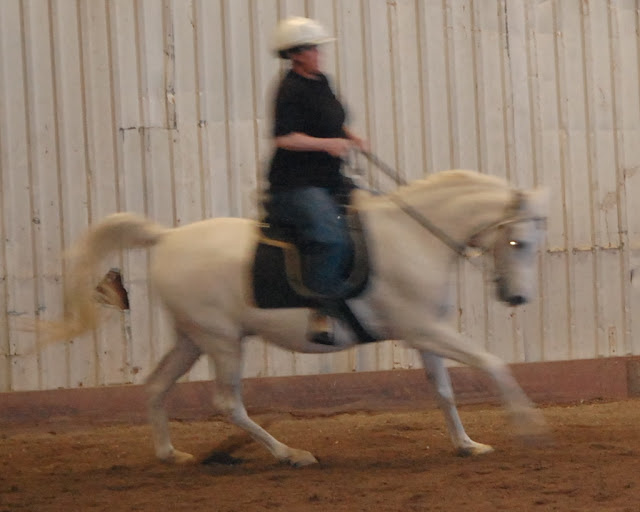 I know this picture is blurry, but he was so relaxed that I had to include it. He did awesome today and gave me everything I asked for. I felt so much more confident. And he felt so relaxed. 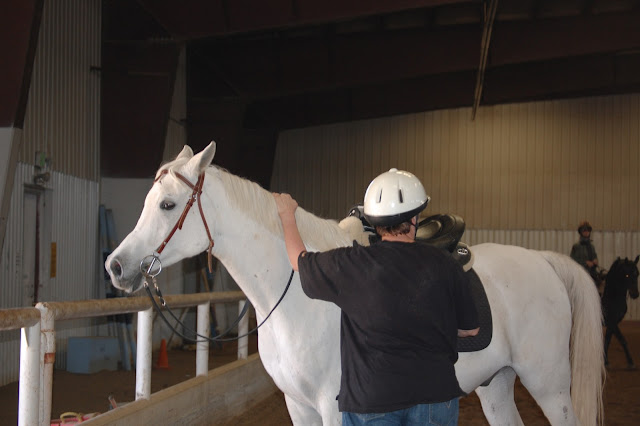 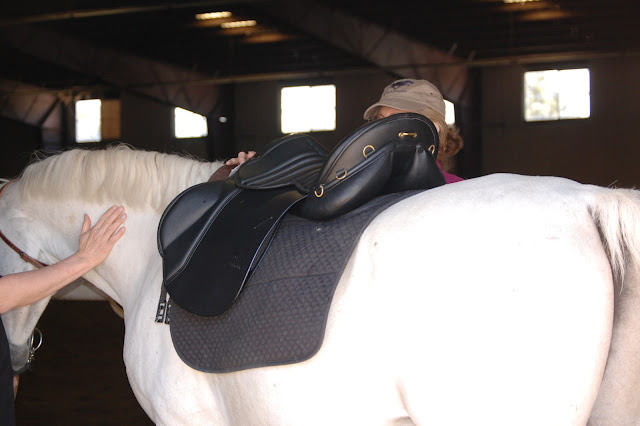 I opted not to try the Selleria. It was too flat and small. I really couldn't see myself staying on it or feeling comfortable. I did, however, want to try the Keith Bryan, since it was the one I was convinced I would be getting. It was also the one that I thought fit Ashke the best when we first put them on. 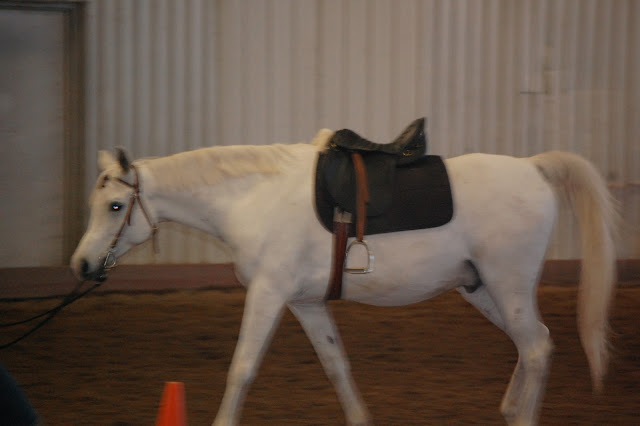 Ashke seemed okay with it, right up until I swung on. 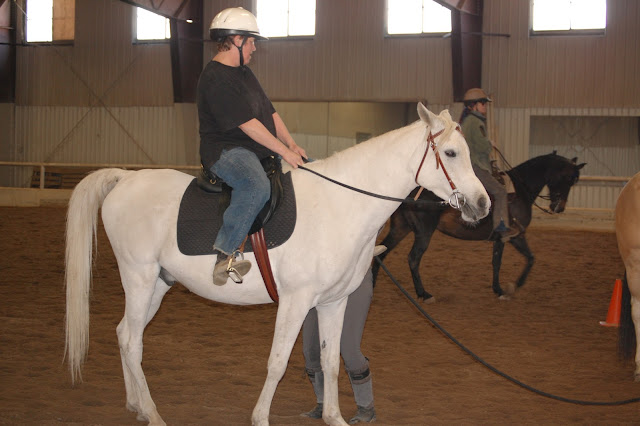 Neither of us liked it. I felt unstable and uncomfortable. It might have been the fact that I was riding in an English saddle for the first time, but I really think it just didn't really fit either of us. I asked Ashke to trot and could feel him stiffen up and brace against the saddle. We only did a half circuit of the arena and I stopped. It was so much different from the Trekker and I knew it wasn't going to be a good saddle for either of us. 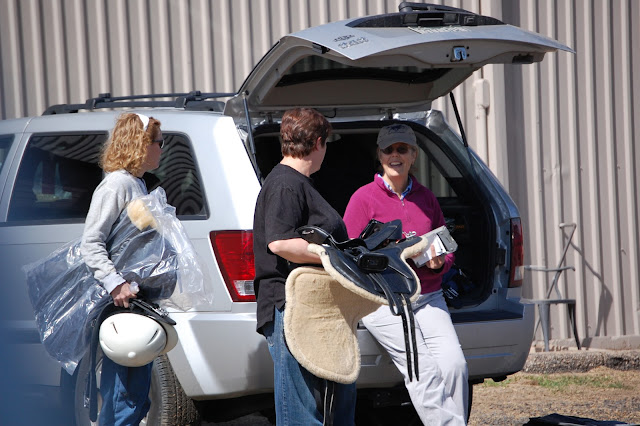 The good news is that I'm pretty sure I can hook the breastplate up on this saddle. The bad news (if you can call it that) is that I had to buy a new saddle pad, dressage girth and saddle. It was about half of what I was expecting to pay and I know that the saddle is going to be perfect for both of us.

Bev said to come by the shop and look at the accoutrements that go with it. I can get a saber and sheath. How cool would that be? Or a map roll (which I would never use.) Bev did say there were a ton of different things I could get to add to them.

I'm so happy that I have a saddle I know fits and that proved to me without a doubt that the thing that has been holding us back has been that damn Aussie saddle.