It came today. I am very happy, since I now have something to interchange with my riding, once I get a saddle. Bev, from the Tack Collection, comes out tomorrow. I can hardly handle it.

I groomed Ashke and then carefully set him up in the rig. On Diane's suggestion, I did not fit the breach strap until we were in the arena. The rig fits him pretty well, even completely stretched out. 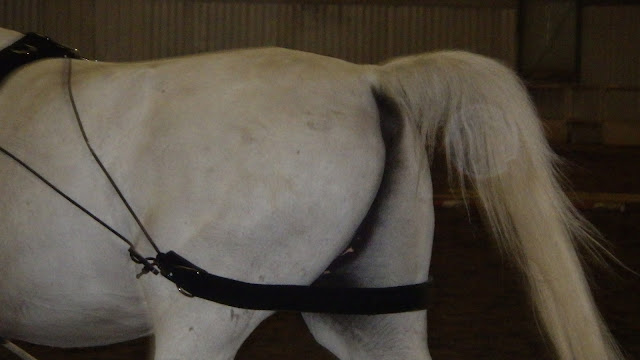 The niftiest thing about this system is that he can't kick it off, which he tried several times at the beginning. I may be able to tighten it a touch, as he becomes more accustomed to it. I was very happy with how well he did considering he hates having any thing around his rump. 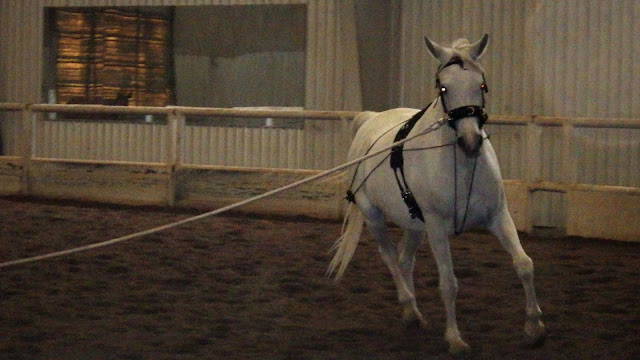 I started with the lunge line on the side, because he couldn't figure out what to do with it hanging off the front of the cavesson. I had to stop him and change it every time I wanted him to change direction. He had it figured out by the end of the session. 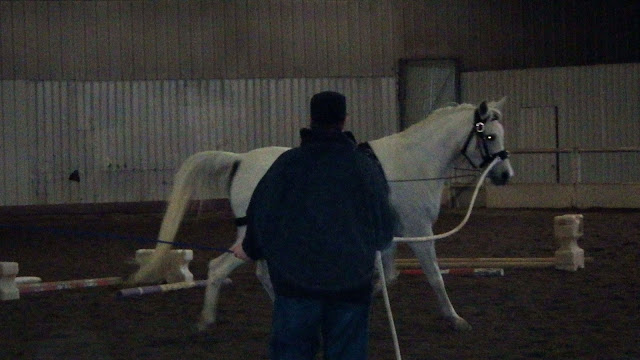 After his little kicking fit and cantering for the first five minutes, Ashke settled down and worked for me. Diane wants me to turn him loose in the round pen and let him fight and figure out the system on his own. Cinnamon thinks that's a bad idea. I'm torn, because I know what Diane is seeing is his coming to terms with what the training system wants him to do. 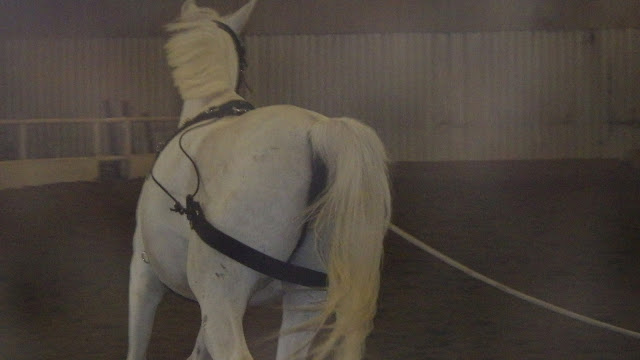 He spent a lot of time with his head up at the beginning. Or with his butt in the air. He did settle, finally, and gave to the pressure. 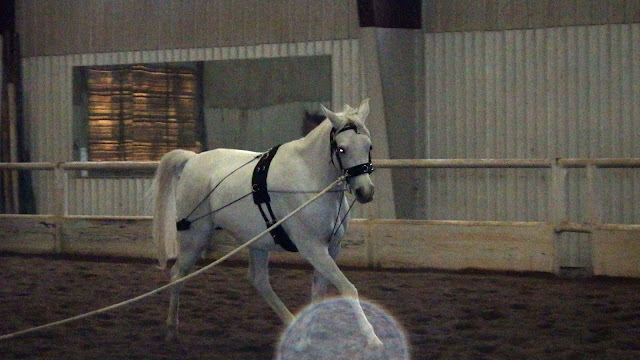 I don't think he was very happy with what was being asked of him, but I just told him he was in training and that this is what race horses are expected to do. 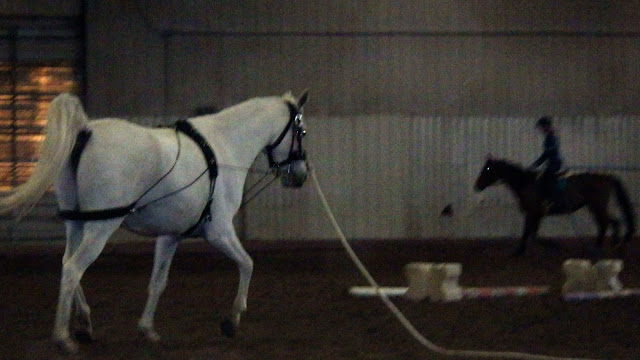 When his tail came up I knew he was beginning to relax. 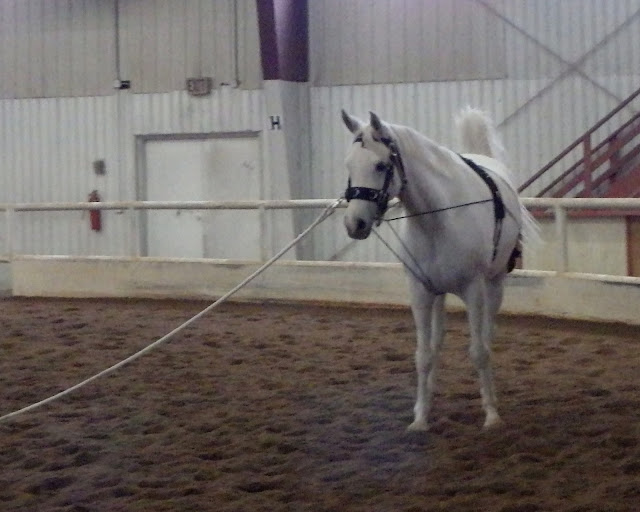 He still stops to take a dump. I don't think he knows how to trot and poo at the same time. 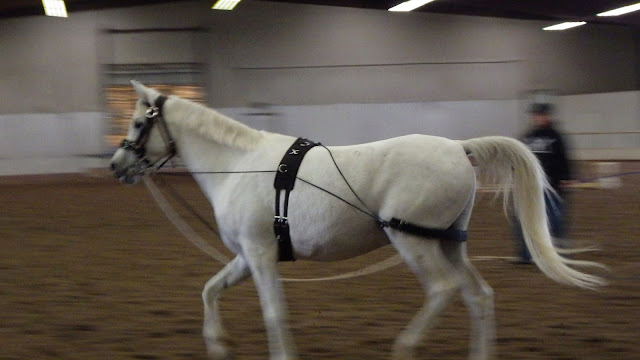 Once he is used to being in the rig, I can start tightening the cords to help him find his frame a bit more. 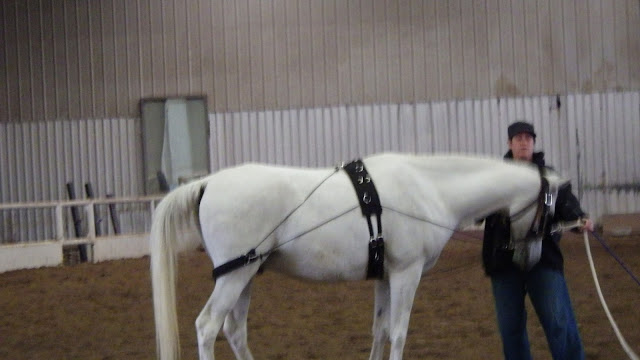 He wasn't so stressed about being in the straps as he was irritated about the breach strap. He did let me move the lunge rope to the buckle on the front of the cavasson. 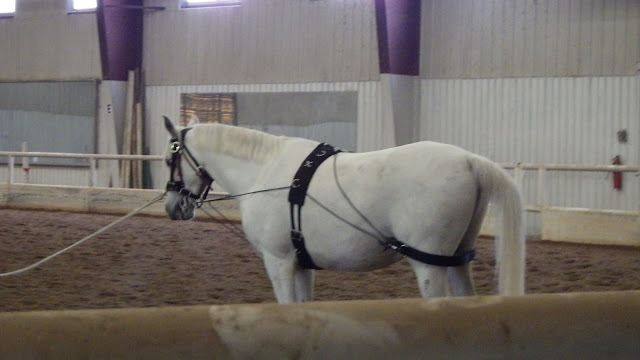 I said something to Ashke about how he needed to keep going because he was in serious training now, and that this is what serious horses do. Cinnamon asked me who had told me to get the system and I told her Diane recommended it, adding that Ashke was fat. Cinnamon said she disagreed, she thought he looked really good. I amended my comment and told her that what Diane said was that Ashke shouldn't be getting any supplements . Cinnamon laughed and agreed.

We worked for a solid fifteen minutes and then stopped. Ashke was sweating lightly and was happy to have the breach strap removed. I took him in and brushed him, then grabbed a couple of handfuls of strategy and walked over to the wash stall. 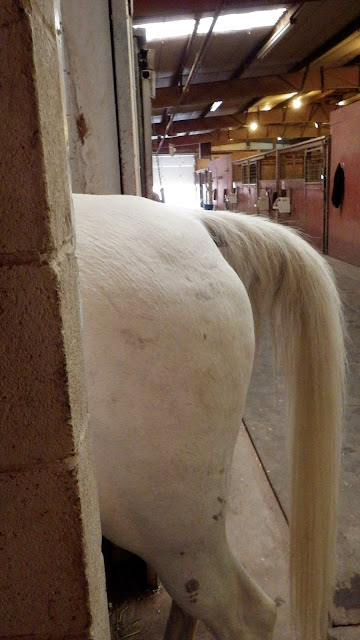 He was so close to being all the way into the stall. 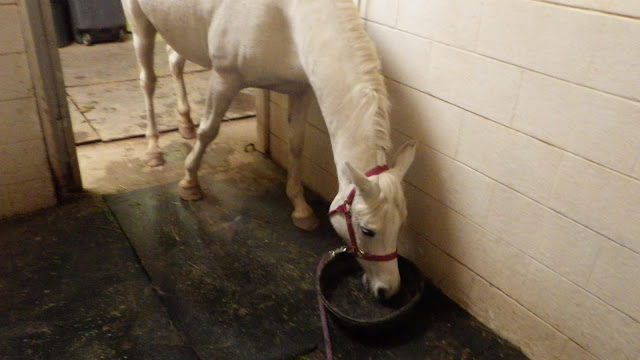 Last night he put only his front toes in the stall and he didn't finish his carrots. Tonight he was almost all the way in. A figure by the end of the week, this will be a non-issue.