. . . of training began with 25 minutes of trot and canter in the round pen. It went well. Ashke got a little puffy a couple of times, but never broke a sweat. He was completely sound and started our exercise session bucking and kicking and tossing his head.

He also spent the first ten minutes cross-cantering when he moved to the left. It wasn't until he settled to work that the cross-canter stopped. He wasn't doing it because he was favoring his right hip, he was doing it because he was turning half of his body toward me while he was running. He finally settled into a smooth, easy canter that seemed like it could go on forever.

I am very happy there was no residual pain from the adjustment. I am happy the Deluxe Balance Training System is on it's way and will be here tomorrow. It should be pretty fun to try it out tomorrow night. Nicole is going to be there and hopefully I can get him going without a lot of turmoil. It is supposed to rain here tomorrow, so using the outdoor round pen probably won't work. I'm a little worried about him fighting against the pressure against the back of his legs. It will be interesting to see if he kicks out against it like he does the come along.

After our round pen excursion, I hand walked him up and down the aisle, then went into the indoor arena for a few minutes. I said hi to Rachel and watched her class for five minutes or so, then went back out to put Ashke away. I decided to feed him his carrots in the wash stall, so spent twenty minutes or so standing in there with my phone in one hand, his lead rope in the other, waiting for him to decide if he wanted to step in to eat the carrots. 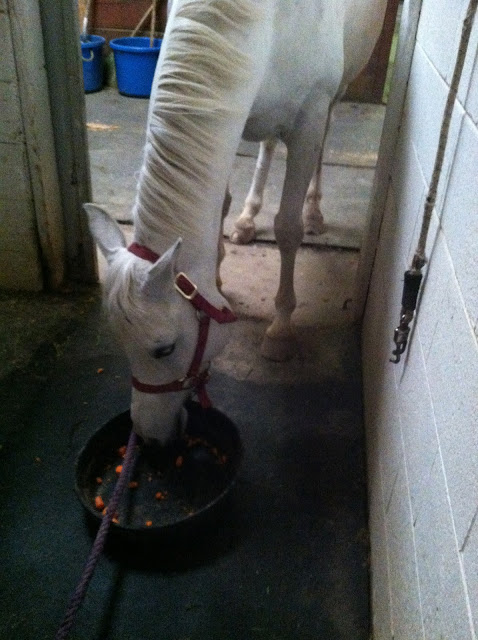 We have head, neck and shoulders, plus his front feet in the wash stall. He ate most of the carrots. I might throw a handful of strategy in with the carrots next time, to entice him even more. I figure I can use a little bit for training purposes, provided he's not getting a steady diet of it.