N and I met at the barn at 10 am. The plan was to work in the arena for a while and then maybe doing a short ride out. Jump lessons were happening in the arena, so we checked out the dressage ring to see if we could do what we needed there. It really wasn't big enough for both of us to ride in and Ashke looked at the little fence ringing the ring and was like - not for him. We'll work on it.

I did a little bit of riding around the outside, but honestly, Ashke wasn't interested. N said she was going to continue to work Cali and if we wanted to ride, we should. I agreed, so at about noon Ashke and I headed to the Mesa. 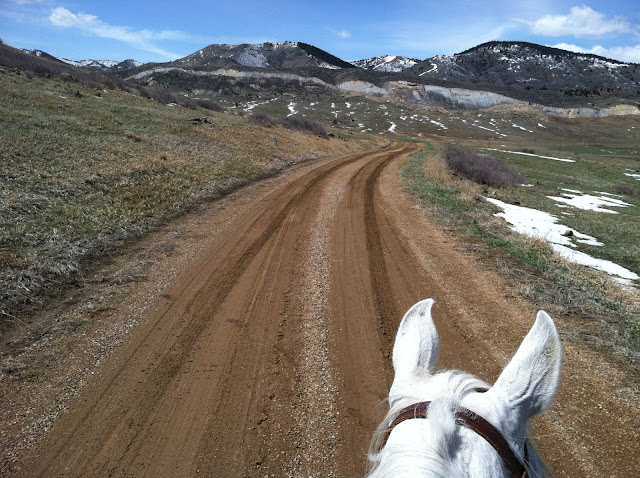 It was a gorgeous day. High just above 60 with little wind. 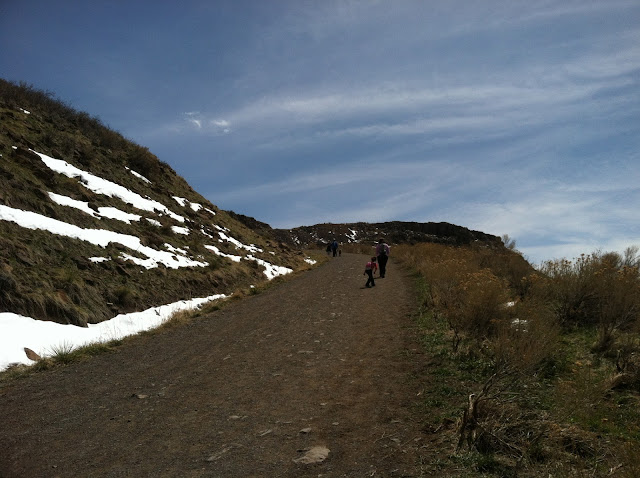 I forgot my Pentax camera and was half way around the hill when I remembered the iPhone. I rode from the barn around to the parking lot and decided to climb the hill. I got off and led Ashke. We beat the little girl in the photo to the top of the hill. But not many other people. We were slow. 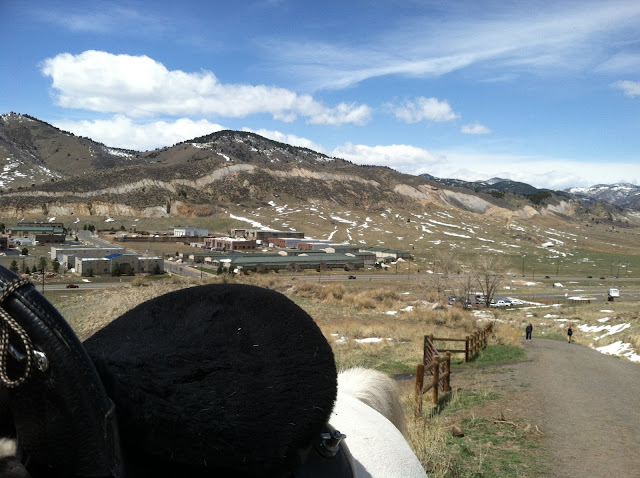 Starting to gain elevation. See the man in blue below us? He beat us to the top. 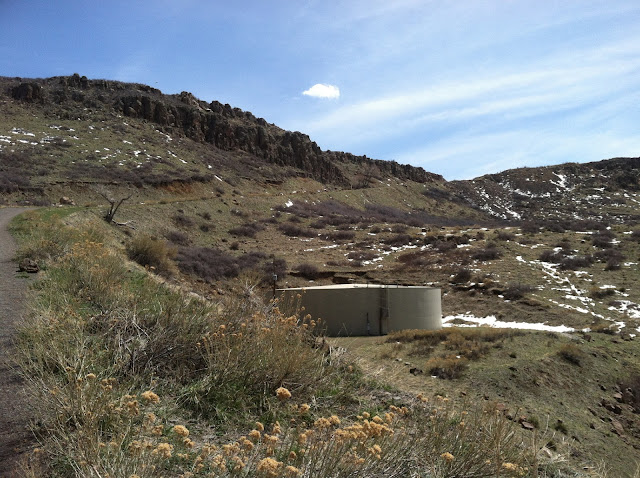 The rest of the hill we have to climb. Good news is that Ashke figured out how to eat grass with his bit on. 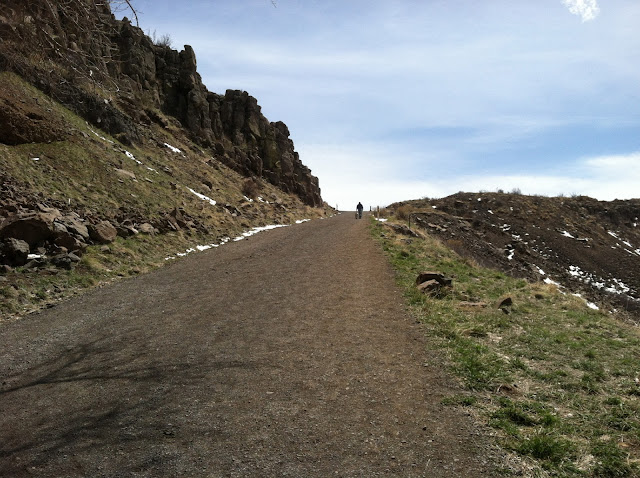 The last push before the top. Ashke stopped here and waited for quite a while. He was trying to figure out what was happening to the right of the road. They were skidding down a shale field. Ashke and I were both very confused. 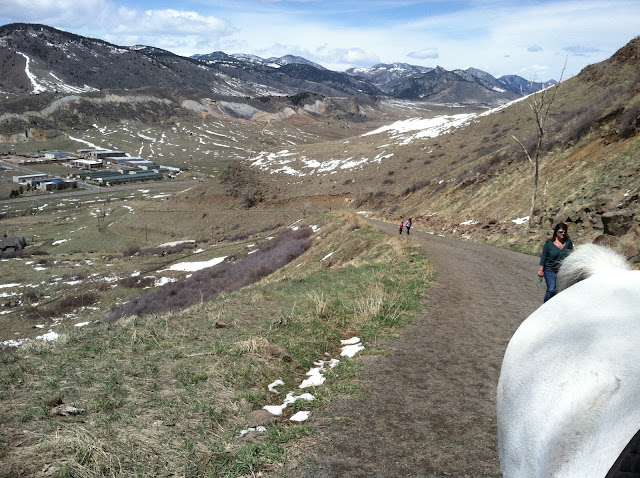 Higher above the ground. 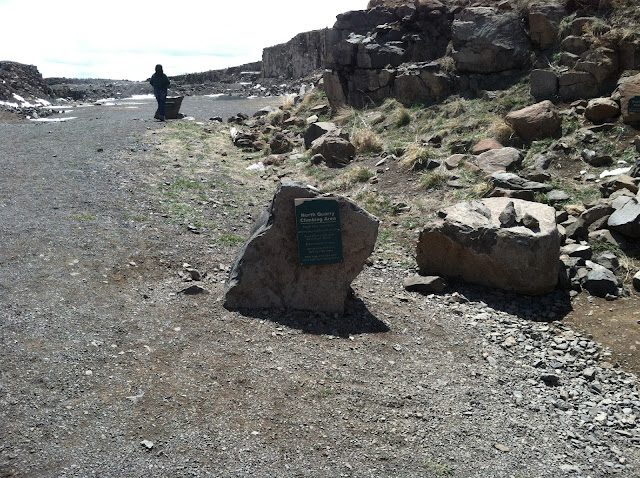 We made the top and took a couple of minutes to catch our breath. I'm so happy I have the new boots. I had loosened the cinch at the bottom of the hill and almost forgot to tighten it again before I got back on. 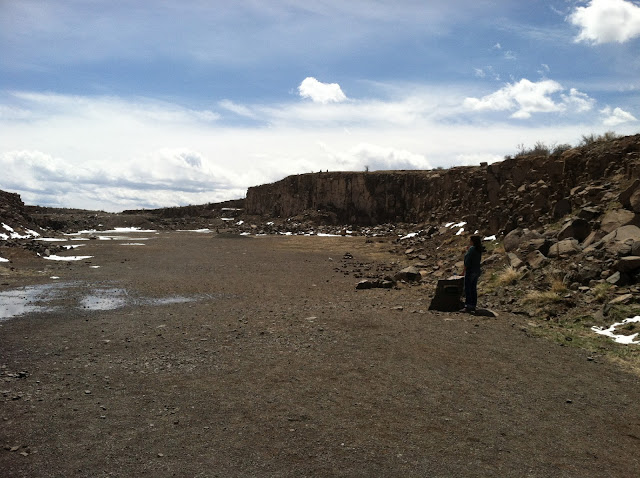 Shale cliffs that you can top rope. Ashke was not impressed. 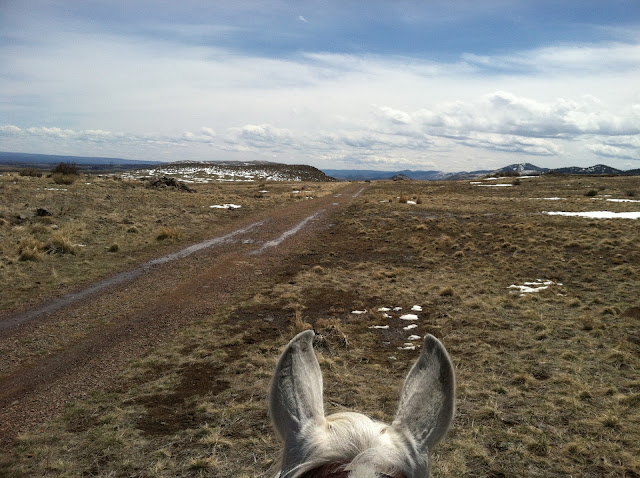 It was very wet and muddy. And rocky. Ashke wasn't impressed with the rocks at all. Thankfully, I am planning to get boots fitted on May 3rd. 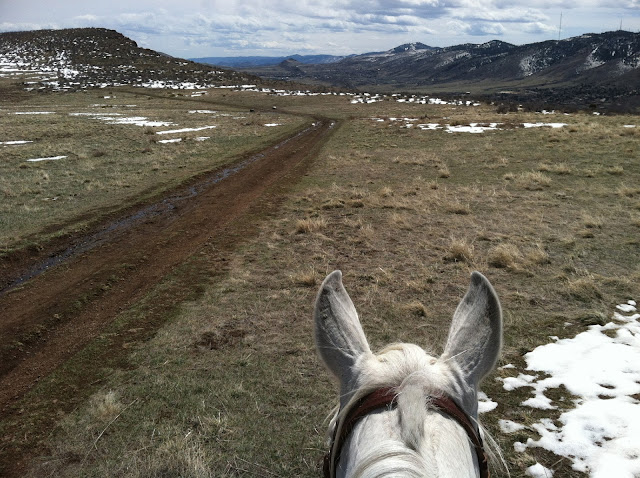 We rode North Table Loop. Ashke was forced to get past his dislike of water. 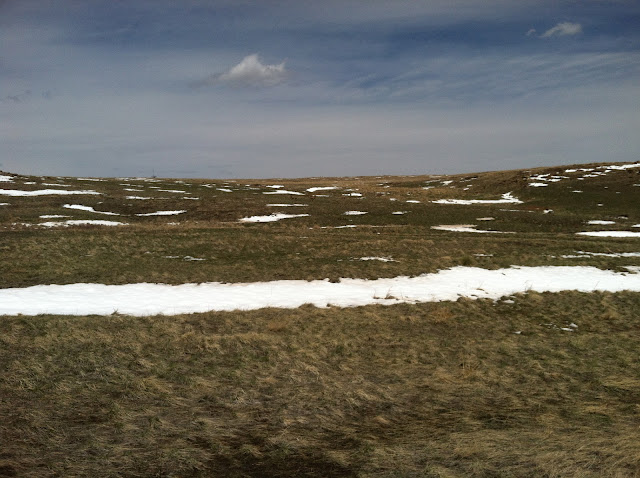 You can't see them, but just at the crease in the hills is a small herd of deer. When they saw Ashke, they started to come toward us to check him out. It was too muddy to continue riding that way. It would have been interesting to see what they were going to do. 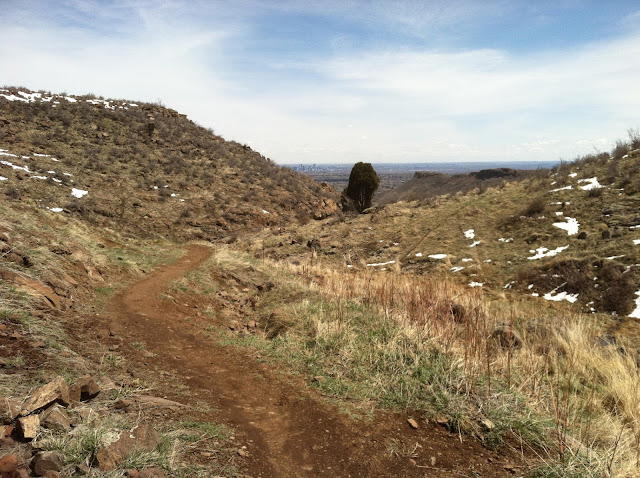 This is where we made our mistake. This is where I made my mistake, is what I meant to say. I should have turned around. 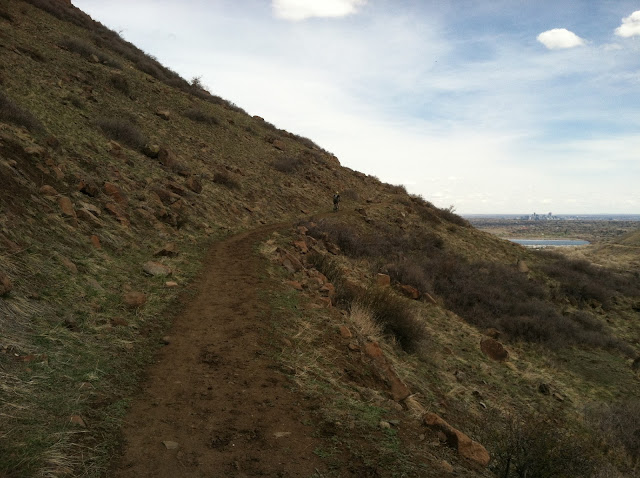 Can you see Denver in the far background? Wish I had had my Pentax. And my hydration pack. We were thirsty. At least I was. Ashke kept eating grass. 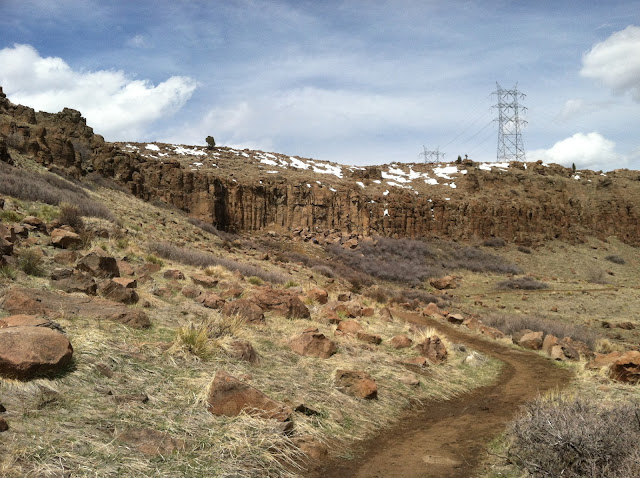 The trail was very pretty, but I walked the bottom to the top and then the top to the bottom. 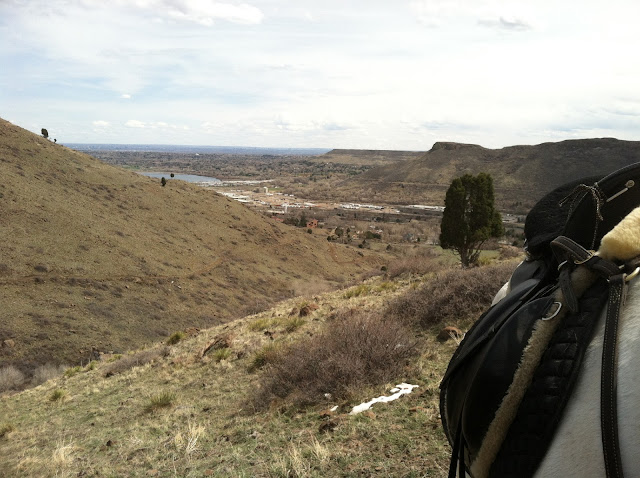 Looking back at the Coors brewery. As you can see, I am not in the saddle. 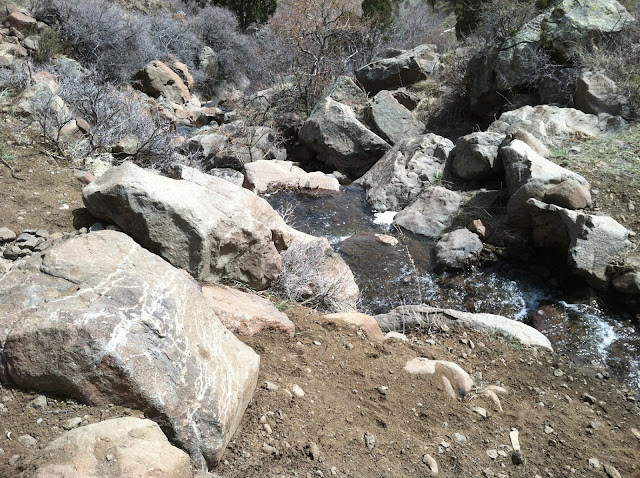 There was a pretty decent stream flowing down the mountain. It was from run off. Ashke was not thirsty enough to try and get down to the water. I had offered him some on the top of the mesa, but he wasn't interested in that either. 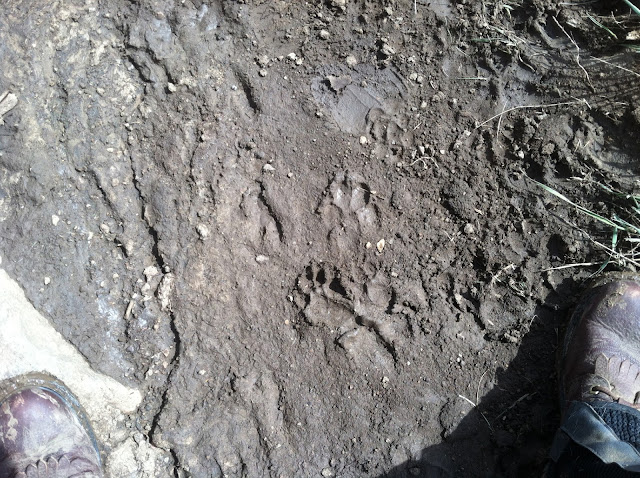 Look what I found, though. Pretty sure that is Felis Concolor. And mini felis concolor. You can see my boot toe on either side for size comparison. I was pretty impressed with my track spotting ability. She had to have come down just about dawn to leave such great impressions. That and I was on a track not many people had gone down today. I won't be riding this track at dusk or dawn. 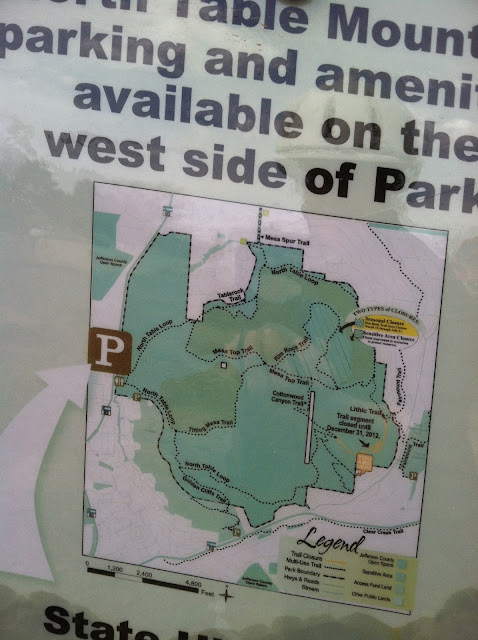 To give some perspective, I was where the P is. The barn is just about where the top of the L in legend is. 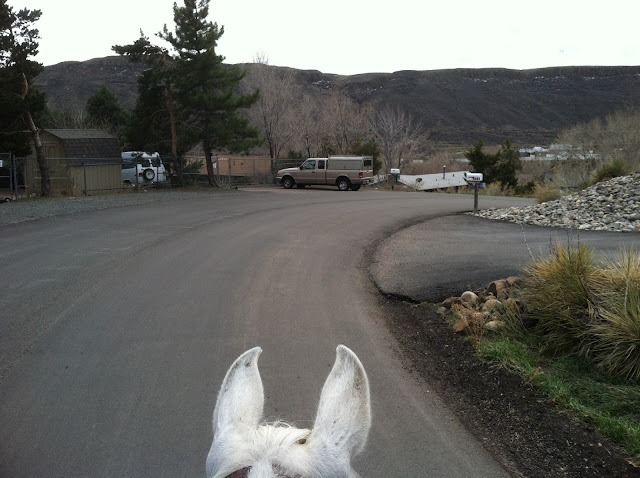 I got into a housing development and mounted back up. I could see the canal N and I had ridden down before, but couldn't find access to the canal from where we were. Everything is private land. 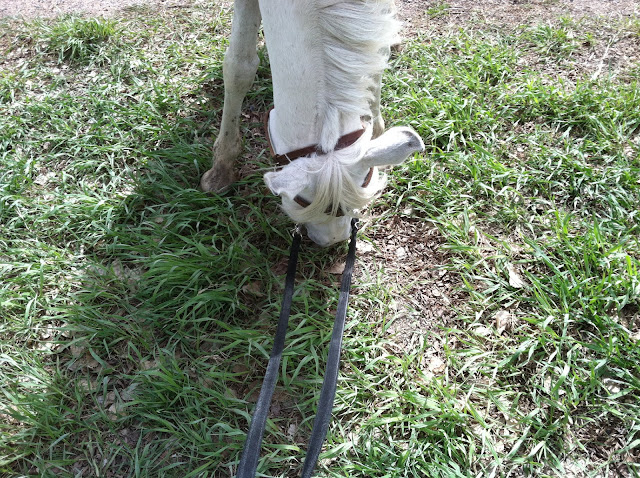 When we got back to the road and I knew where I was, I had to get off again and lead Ashke. We were on a busy road and there was little shoulder. I wasn't going to risk riding there. Ashke liked stopping to graze on the fresh greenery. 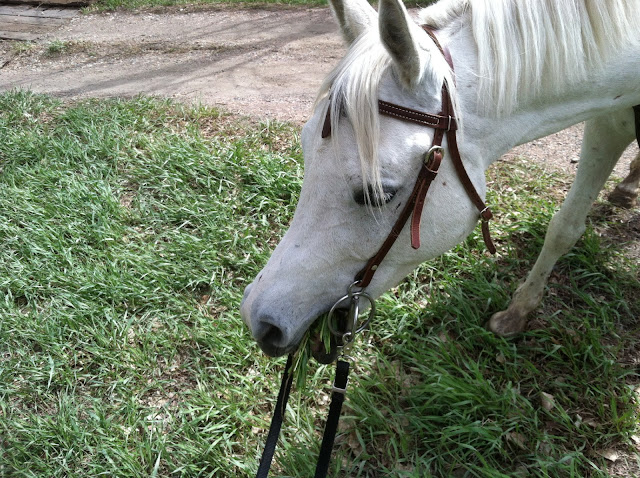 We were both pretty tuckered by this point. 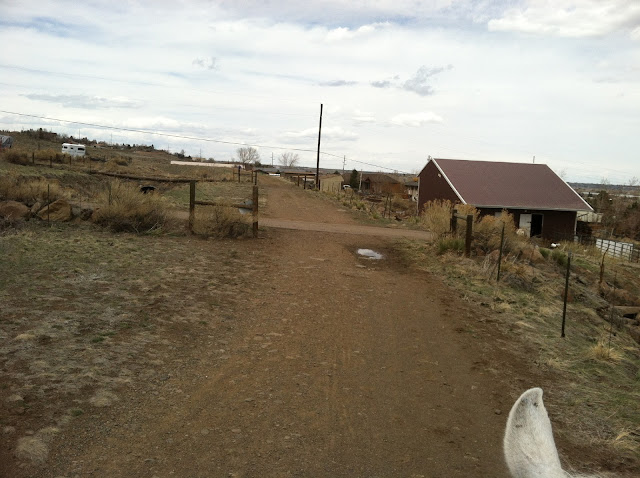 We walked down the road to the access point for the canal. There I mounted for the final time. I took my phone out and played some music from my playlist. Ashke turned his head sideways and cocked an ear back to listen. He liked George Strait, REO Speedwagon, and the Dixie Chicks. He hated Buy Me a Mercury, but also enjoyed Kiss You All Over. We bypassed the music from Red vs Blue, because I don't like it. How could I tell? He walked in time with the music. 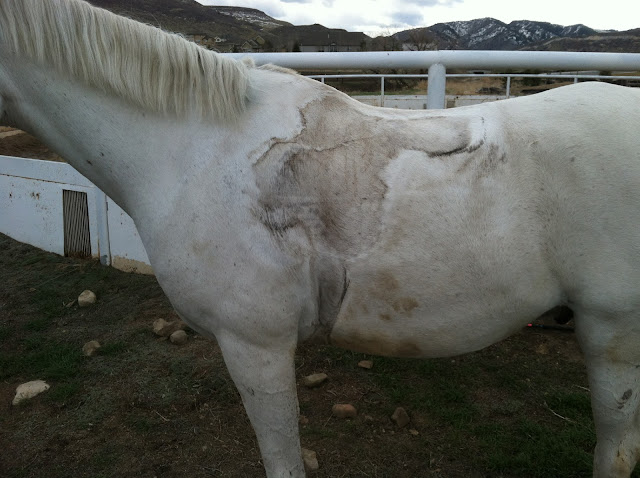 We finally made it back to the barn and I stripped off the saddle. The sweat pattern was pretty consistent and it looked like the majority of the weight is being carried in the front of the saddle. 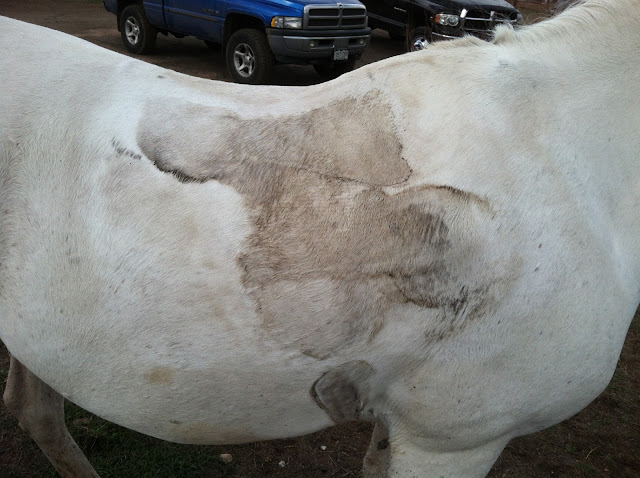 No back soreness. I will go out and check on him tomorrow to see how his legs held up. Today, there was no swelling and no heat. 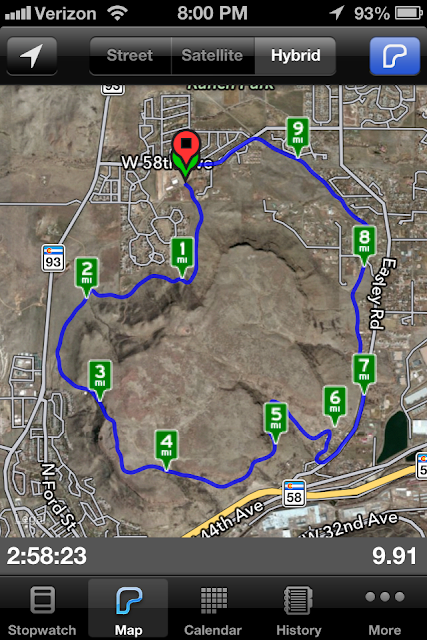 Right behind mile marker 5 is where I saw the Puma tracks. And baby Puma tracks. Almost 10 miles in just about 3 hours. Probably would have been faster if I had been riding instead of walking. Mile Marker 5 was also where I was when N called me worried about why I hadn't gotten back yet. 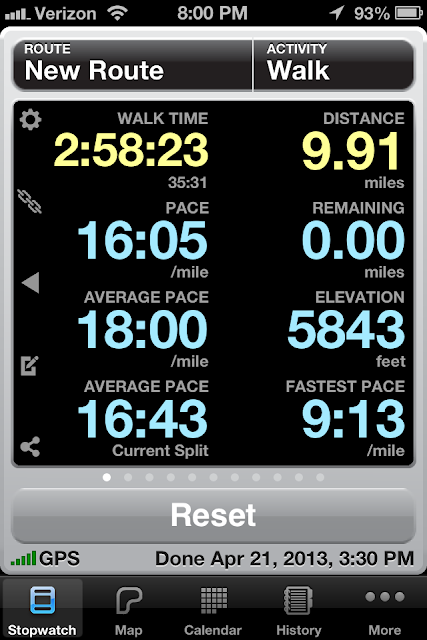 Not great time, but considering I figure I hiked almost 3 miles of the 10, it's not horrible. 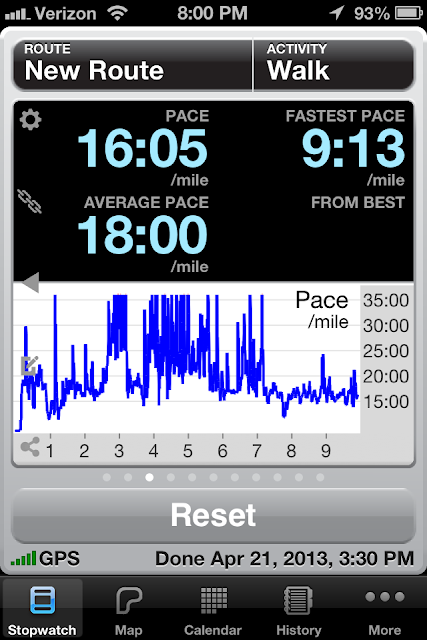 The pain part of this comes in the form of not being able to move anything other than my fingertips tonight. My lower back is enfuego. 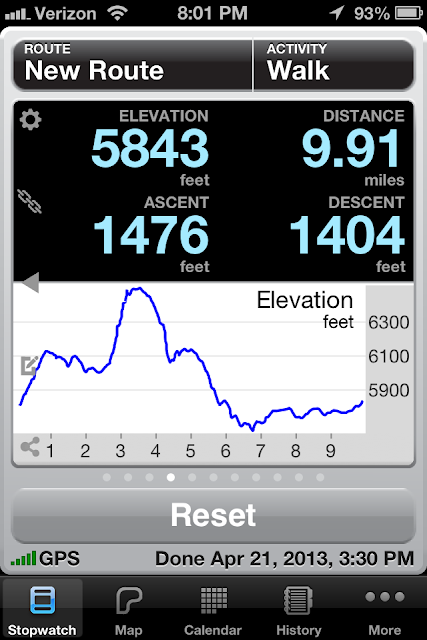 Pretty impressive, if you ask me. We did a lot of walking today. Ashke had plenty of food and fresh water waiting after I washed him down and took care of his legs. He didn't seem too out of sorts, he managed to shy at every manhole cover we passed. He did seem to be happy when we got home, however.