This is the A blog that I missed earlier in the month. (I only have C and D to do to catch up completely.)

I went out and hung some new hooks in the tack room tonight and helped Nicole move her stuff over next to mine. There is a new trainer moving in and she is going to use one wall in our tack room. Sherl had asked me to move from two saddle racks to one, which I was able to do pretty easily once I had installed the four rack hooks. 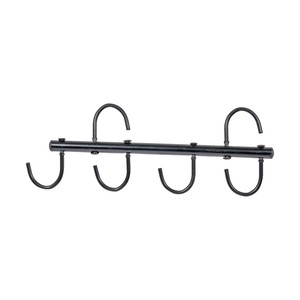 I used two screw in eye hooks and then slid the top open loops into the eye-hooks. Worked really nice.

Then I pulled Ashke out of his stall (he was going nuts - calling for Cali and calling for me) and brushed the mud off of him. I saddled him and then spent some time attaching the breastcollar and oh shit handle from my old saddle onto the Trekker. They worked really well and it gave me the opportunity to use the martingale. Since I am using the training system, I wanted to reinforce him directing his head downward and I'm just not talented enough to do it on my own. Once he was set up, we went to the arena.

He was amazing. I handwalked him for two rounds around the arena and then tightened the cinch and mounted. We walked a couple of rounds then moved to the trot. I felt really comfortable and felt like even though we had worked in the training system the day before, he was feeling stronger and more confident. Nicole noticed I had the martingale on and I told her I felt like I couldn't communicate what I wanted him to do without it. She said she understood and thought that maybe I could go without it once he had been working in the training system for a while. That is my hope, but for now it is a decent tool.

The new trainer was there. Her name is Cassandra and she was very friendly, and easy to talk to. She was working with a Friesan-Morgan cross who thinks an awful lot of himself. Cassandra thinks he was cut late and he acts like he's still got all of his equipment. I guess he scared his owner pretty badly and she now wants to sell him. He is gorgeous and a lot of horse. I don't think I would want him. I think Nicole might, if she didn't already have Cali. Anyway, when the trainer rode by Ashke she said he was an adorable horse (I think everyone thinks he is cute because he is so small and has such a refined head) and then said he would make an incredible dressage horse. Nicole laughed and told her the story of converting me to English riding style.

I hadn't thought of this prior to that moment in the arena, but the whole reason I bought Kiele back in 1992 was to do dressage. I wanted to learn to ride and show dressage. Of course, I bought an insane horse that was afraid of everything. Maybe if I had approached her with the same patient and care that I have used with Ashke, she would have found calm instead of trying to beat herself to death with a railroad tie. Maybe if I had had her in a barn with an indoor arena, had spent time building a bond with her instead of cowboy breaking her, things might have been different.

So, that brings us back to where I am now. I am thinking learning some dressage is a good thing (somewhere Nico is giggling maniacally and rubbing her hands). I think I might consider Cassandra for a trainer. I think I'm going to need to wait for a while before talking to J about it, since I need to really get going on paying down the credit cards so J doesn't freak out. I want to be able to ride better.

Ashke cantered in both directions easily and on the correct lead. J said he looks different. She thinks he might be trying to put himself in a frame (not her words, but the concept) and is still trying to figure it out. She said he looked more collected and his butt was being used differently. She hasn't seen him in a while, so it was good to get the feedback. Ashke was so not really excited about circling the arena, so I started him up and down the middle doing rollbacks. We cantered from the east end to the west end and stopped. I asked him to back and spin. He knew exactly what I wanted him to do and when we spun and I chirped at him to canter, he spun and jumped into the canter. I almost lost my seat - good thing I was riding in a calvary saddle. :) He was so eager and knew what I wanted. That exercise was fun.

The last time we cantered down the arena I turned him into the circle moving to the right and then realized he was on the wrong lead, so I asked him to slow down. He did and then walked up to Cinnamon and let her love on him. He really likes her a lot. I noticed there were two cones set up at the east end of the arena, on either side, so we started cantering between them, slowing to a trot to circle around them and then cantering to the next cone. He seemed to really enjoy that exercise too. Nicole was watching us with an amused look on her face when we stopped. I grinned and told her I was just keeping it fresh.

Ashke was amazing and very willing to work, even if we didn't get to ride outside. I think I can feel a difference in how he is moving, even after only two times in the training system. Maybe it's just me but I sure hope so. J thought she could tell he was moving differently, although she couldn't identify why. Nicole said he was looking very comfortable, although I needed to keep my hands lower and sit back a bit more. I can feel us making progress and it makes me so happy. And Ashke? He's just amazing!

(So, the reason I didn't ride outside is a fierce, gusting wind and oncoming storm. We are supposed to get 6 inches of snow tomorrow and it's supposed to snow through Wednesday. I really hope the weather clears, it's not windy and it's warm for the weekend. Nico and I need to ride out!)