Do you know what you get when you take a horse in high level training, being ridden four or five days a week, put them on stall rest for a week, have temps drop into the sub categories, and dump 8 “ of snow? Spookville central.
I wasn’t able to ride on Friday, because I took Tristan to Vail to ski. It was a great ski day and he really wanted to try his new helmet. He was working Saturday and Sunday, and Jenn couldn’t take Friday off, so I did. 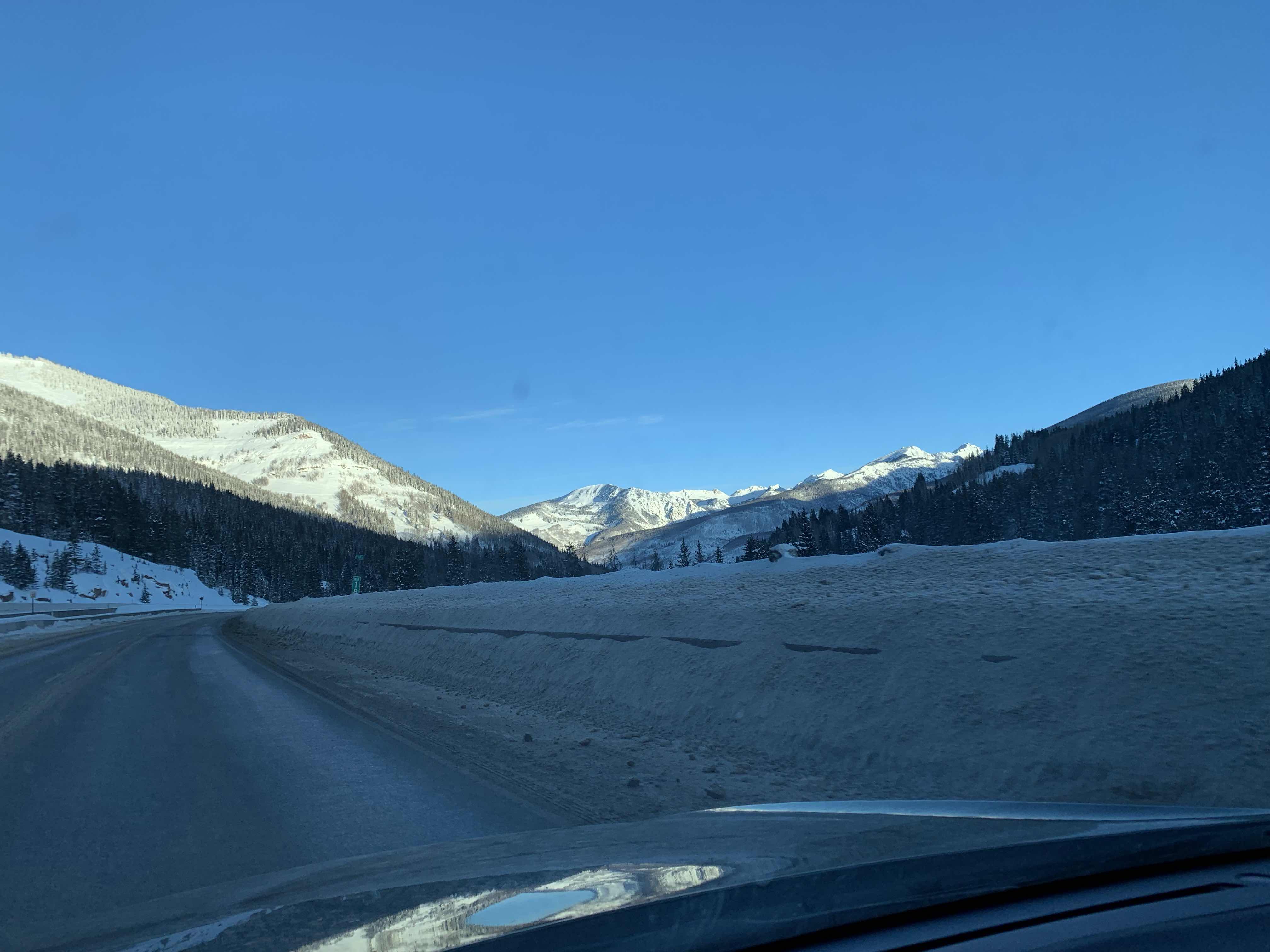 Mountains driving I-70 toward Vail, just as the sun comes up. 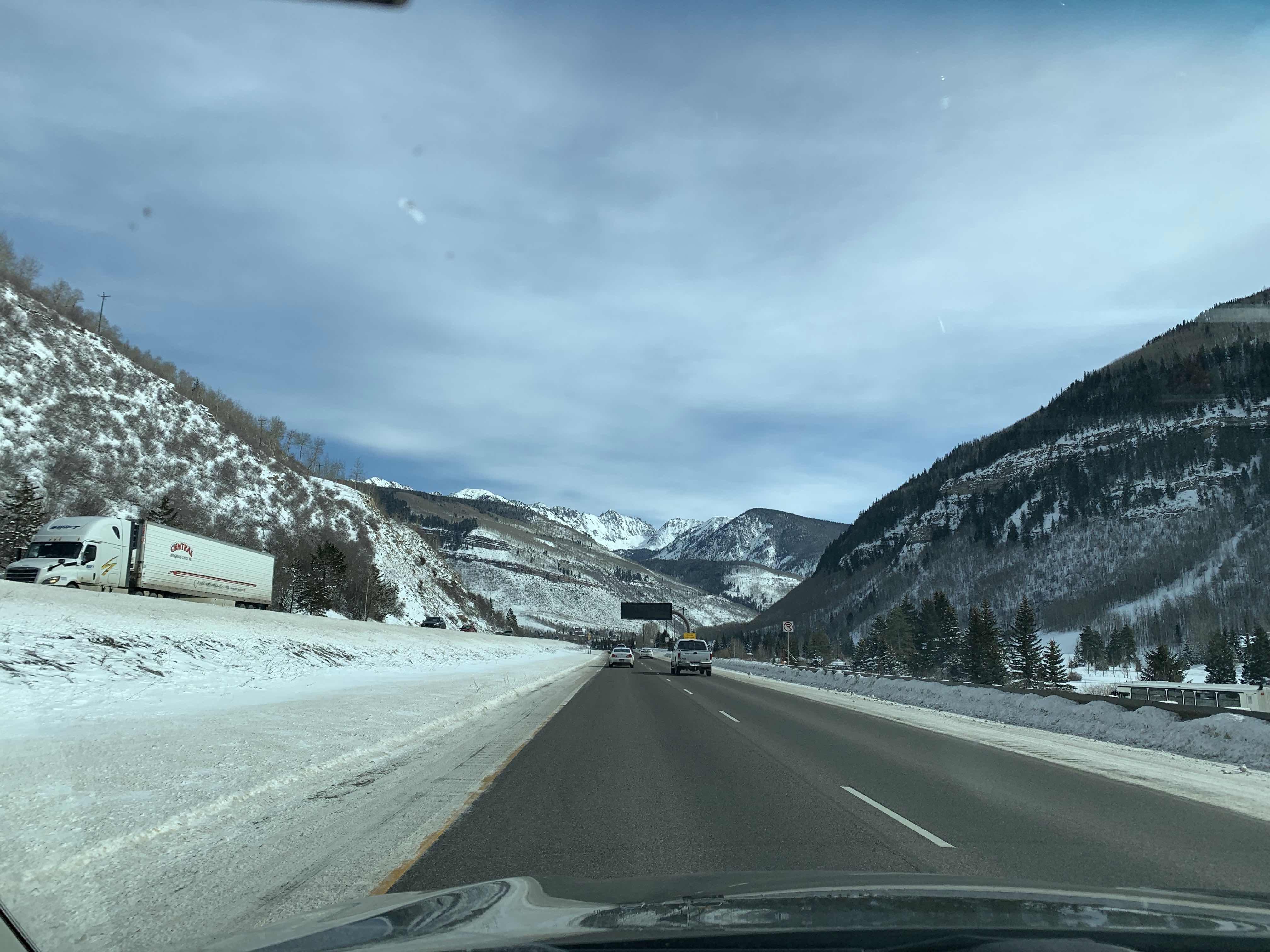 Mountains driving I-70 on our way home.
He was on the lift as they opened and got to the back bowls to ski. He was having a great time, but he had a horrible headache that he could only relieve by tipping his head forward and pushing his helmet back. We left early because it hurt so badly he had the equivalent of a migraine. When we got home, I took the liner out of the new one, swapped it for the liner in his chrome helmet, and when he tried it on he was so happy. The new liner made the helmet too tight but he will be able to ski in it now.

The blue things gave it just enough thickness that it made the helmet too small.

That was Friday. Today, when I got to the barn, it was 18 degrees and felt colder than that. Ashke’s water was frozen over and looked like it had been broken once already. Ashke may have had a small drink, but it didn’t look like he had drank very much. I decided that I would go grocery shopping first and headed out. I thought about the water issue. Ashke is in an end stall and his door doesn’t close tight, although I plan to address that tomorrow with a bungee, and the door at the end of the barn isn’t tight. I decided to get one big bucket and another slightly smaller bucket and sandwich them together with shavings between them. I figured that the air temp at that end of the barn is cold enough that the buckets are freezing from the walls in (I was correct.) 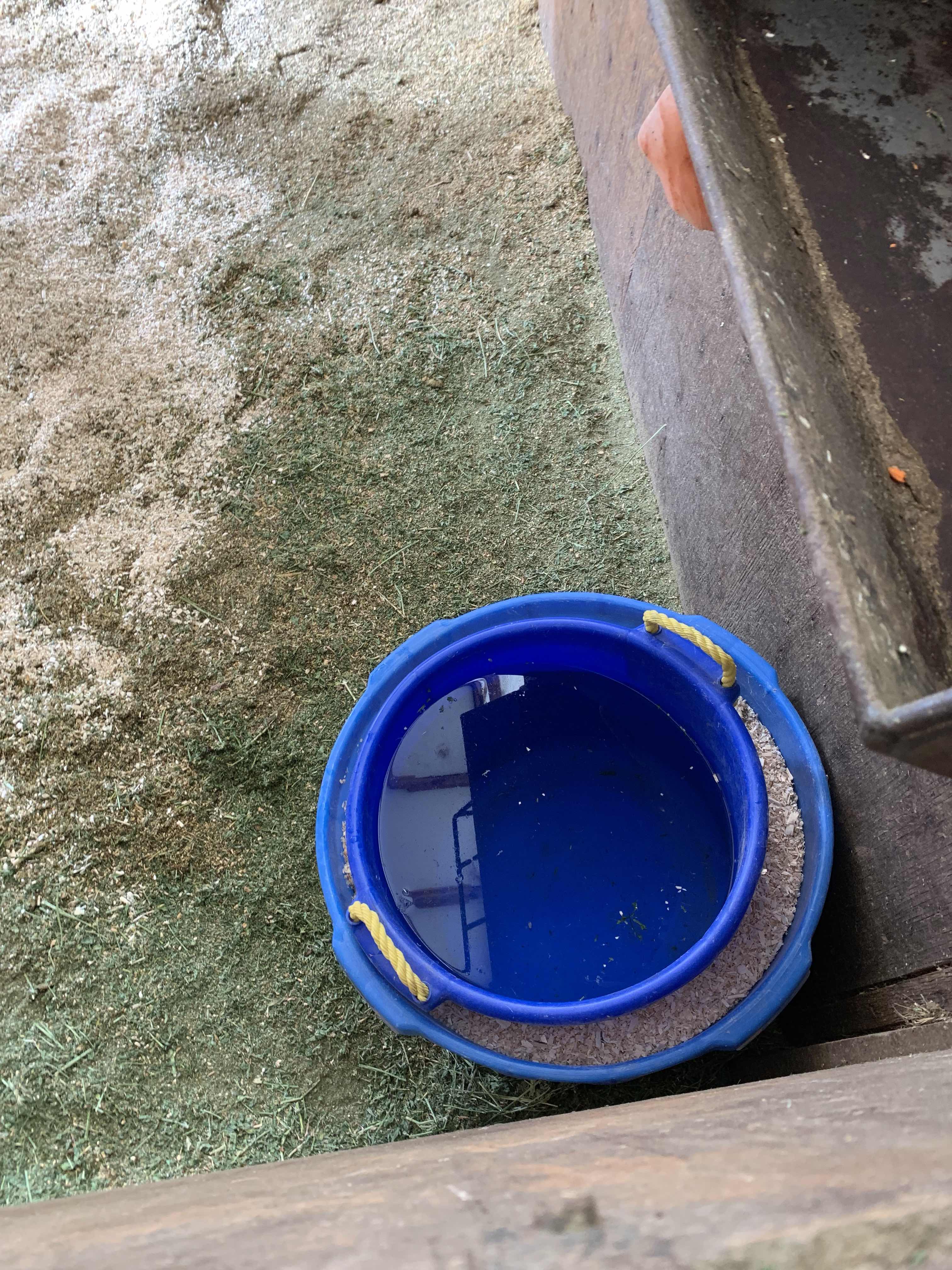 Three hours in his stall with zero ice. The other buckets left hanging had a skim of ice on them over the same time period.

Then it was time to ride. The temps had risen enough that I was able to ride without gloves. Rachel was out to ride Laz. Both Laz and Ashke were in the same boat. Ashke had hocks injected and Laz had his stifles. Because of the weather and my son’s need to ski, neither of the horses had been out in a week. The indoor was a cacophony of sliding ice, running water, dripping moisture and banging sounds. Both Laz and Ashke were a startle-spook-startle mess. 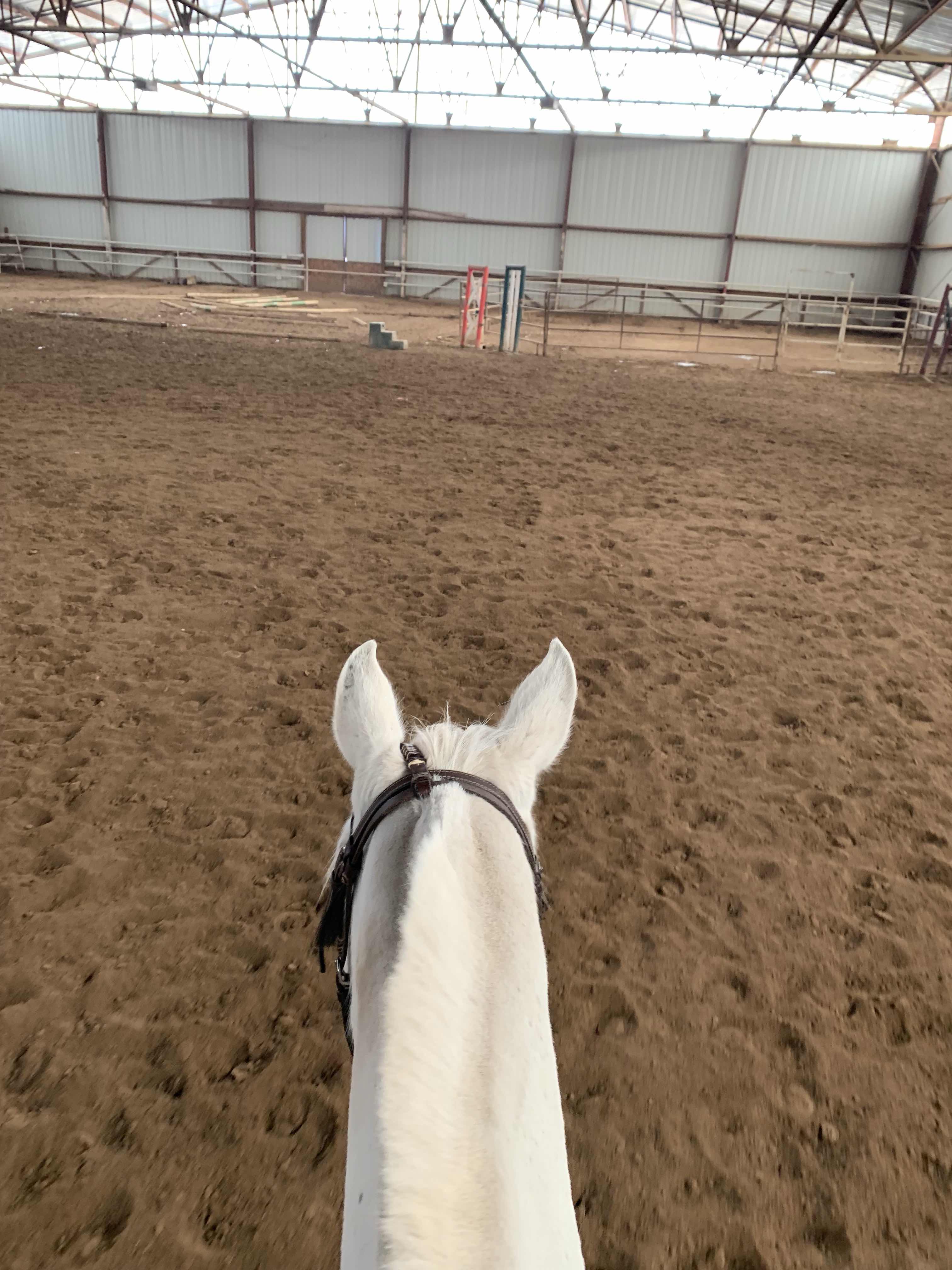 I got a bunch of good walking, some solid trot and a little bit of canter. We had four changes at the end of the ride, which were amazing. I was able to keep Ashke focused on me and I basically ignored the rest of his reactions, figuring it was great practice for a show and expected him to do his work even with the noise. At the end of our ride, Ashke drank down almost two inches of water out of what amounts to a small muck bucket. That made me really happy I got the water situated this way. 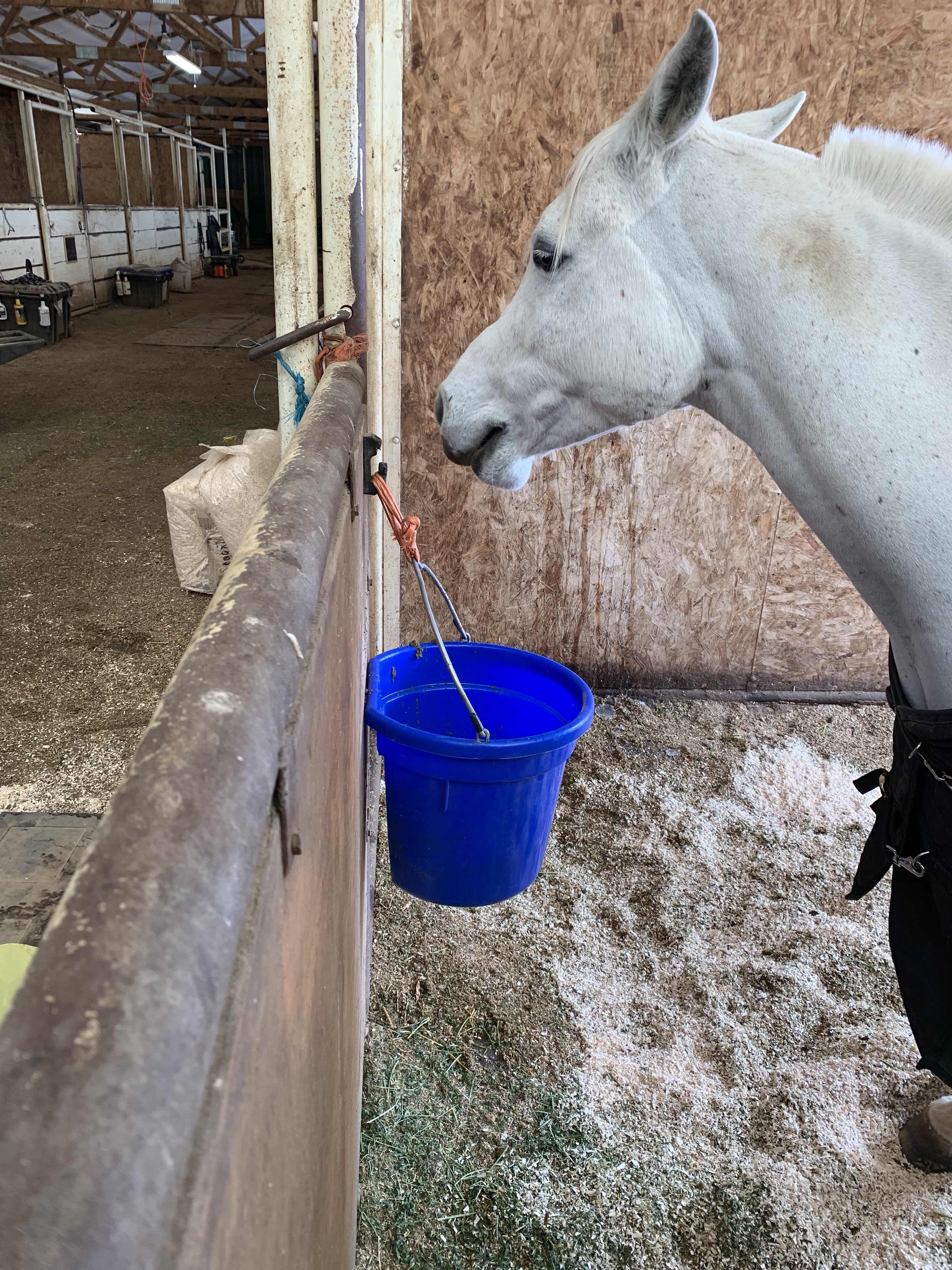 He got a hot mash and I helped Manuel lock the horses in before heading home. I’m meeting Flambe tomorrow at 11 to ride.
Posted by Cricket at 6:11 PM