The Ride that Wasn’t Bathroom Remodel

I went out to the barn and spent 45 fucking with my Pixem and finally figured out that at least part of the issue is that I have no idea how far 300 ft is on the diagonal. It’s certainly not as far as I thought. I was at about 200 ft on the diagonal to get the camera to track, which is still big enough, but I wish it was a little farther. Once I got the beacons set and ready to go, I went in to get Ashke. I had just tied him and stripped his blanket when the wind hit. Someone yelled, “Karen, the beacons are flying”. I asked Amanda’s mom to keep an eye on Ashke while I went out to collect my items. Thankfully, the robotic part did not hit the ground. One of the other women helped me collect them. I was almost back to the barn when F came running out of the barn to say that Ashke was not happy. Amanda’s mom had gotten him untied, but homeboy was doing Aires above the ground again. I dumped the camera stuff and took him into the indoor where the noise of the wind sounded ominous and homeboy was a kite. Flambe showed up and we both agreed, watching Ashke fly around at the end of the rope, that nope was happening.
I put him away, gathered up the camera parts, and went home.
However, here are wonderful pics of the bathroom: 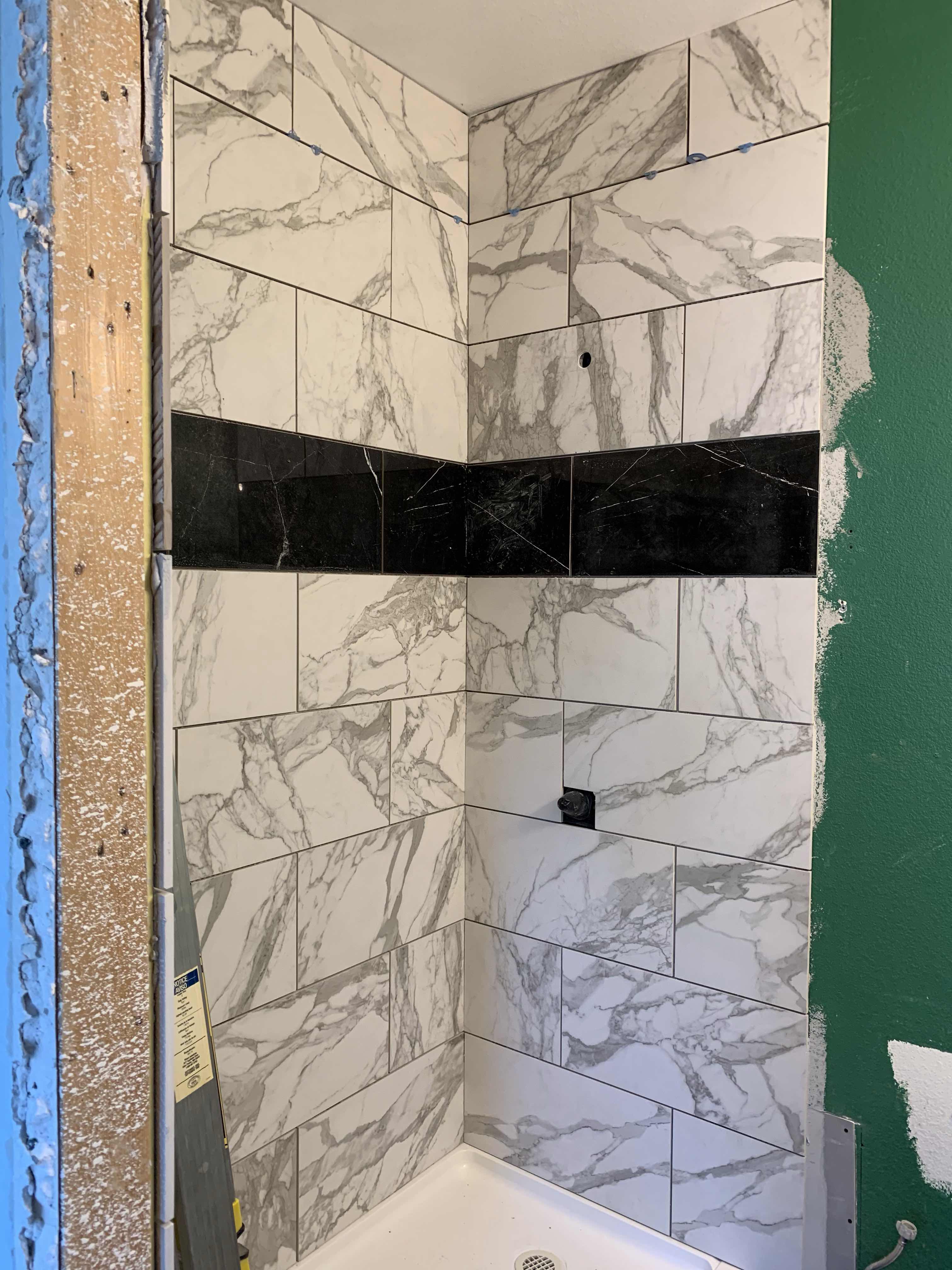 I think we did a great job in picking the tile.
T may never leave the bathroom. 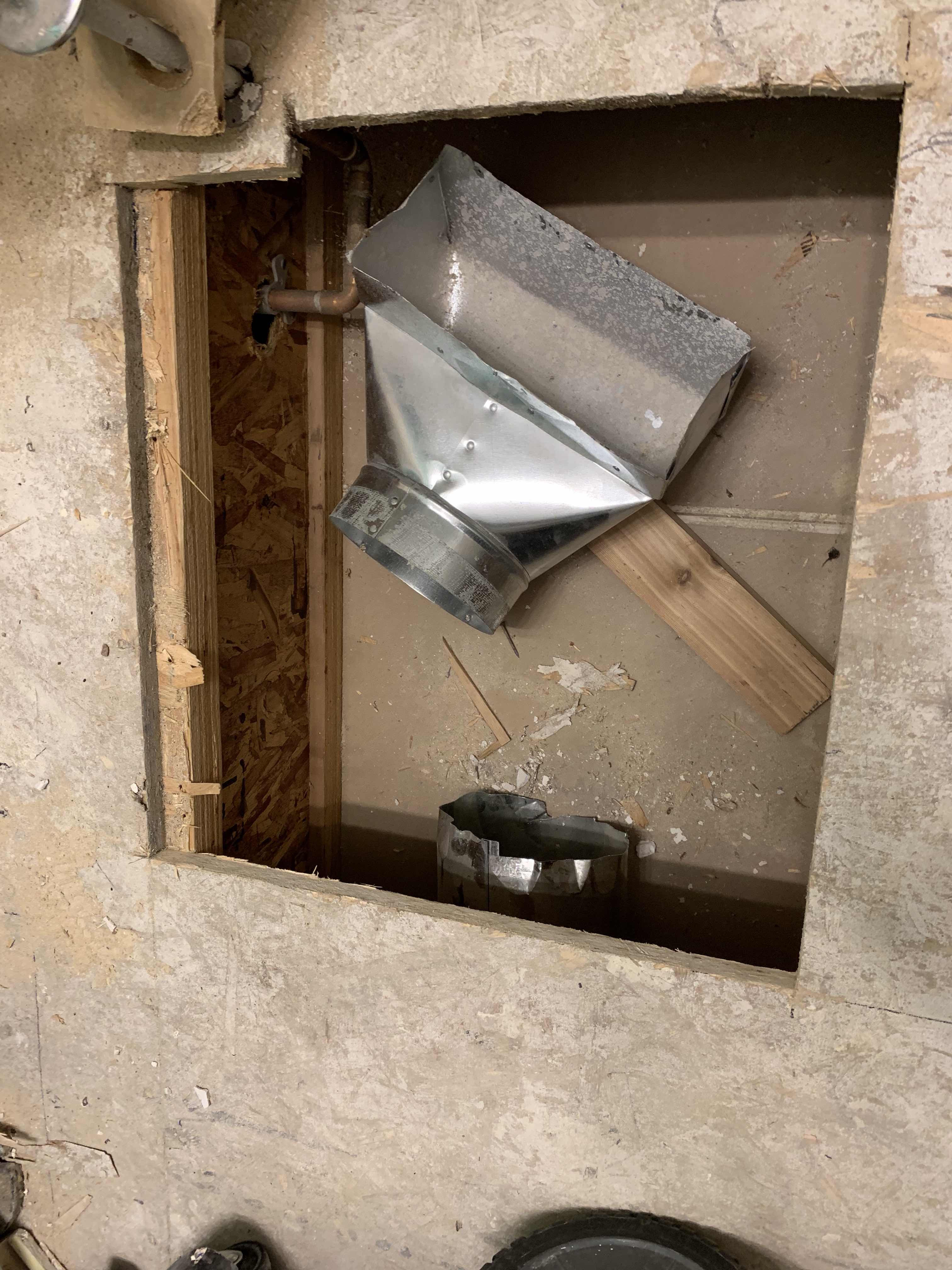 The fix for the heating vent. The only thing that could be done was shorten the pipe and move the radiator toward the middle of the room. 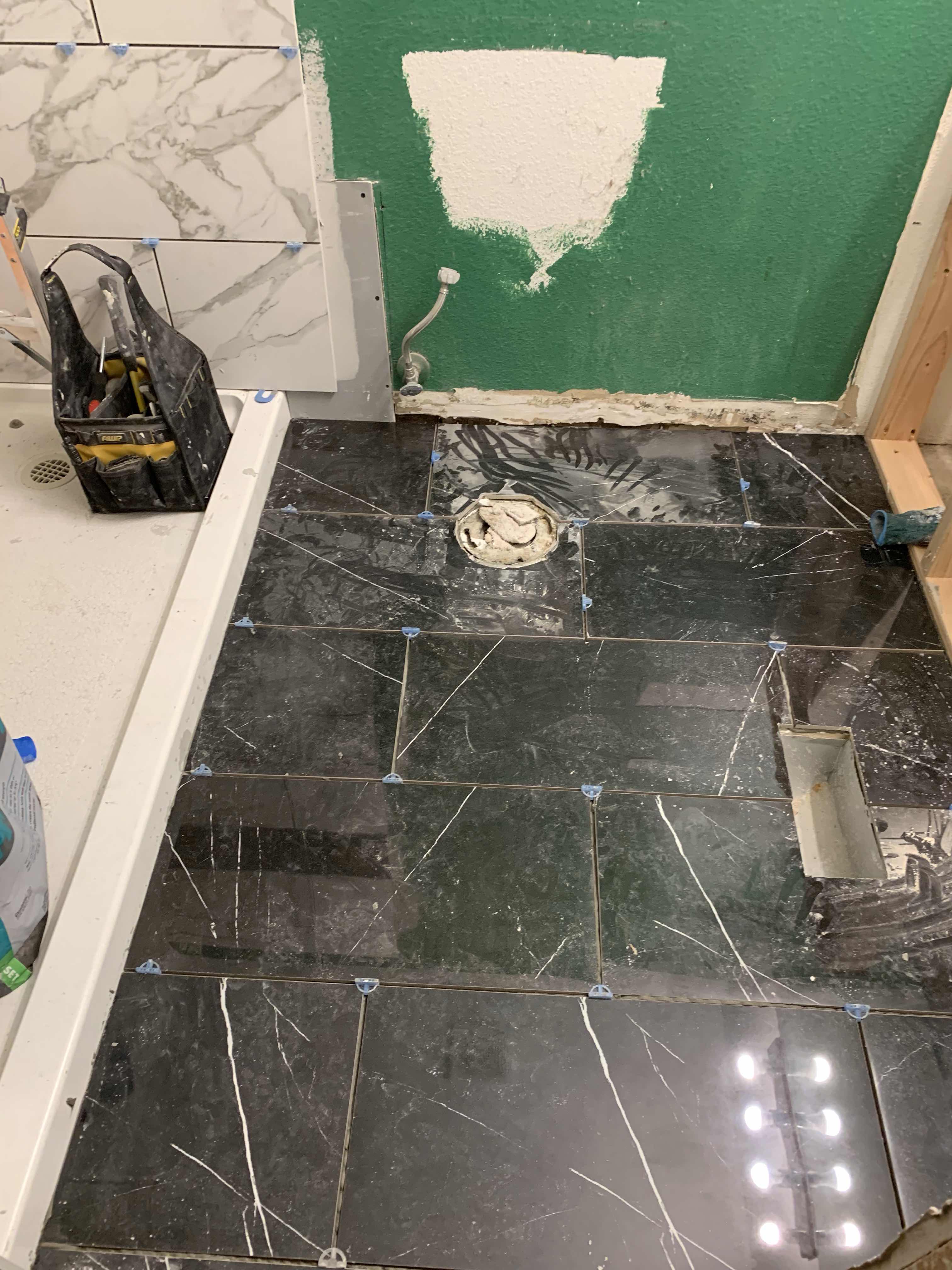 The heat vent surrounded by the tile. 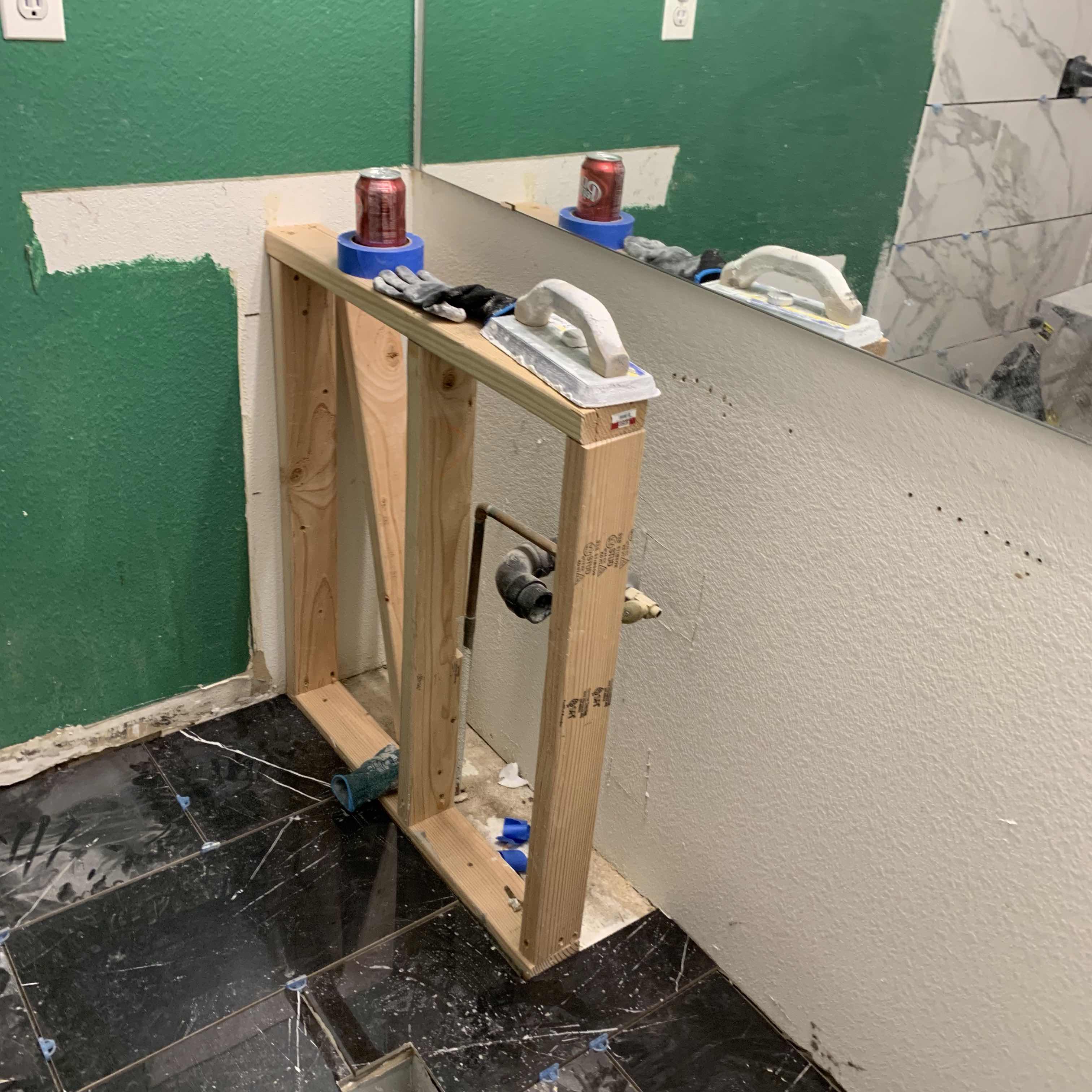 The pipe for the hot water is the copper pipe that comes all the way up, with the waste pipe in black below that and the cold water pipe is much lower and hidden behind the 2x4.
The pony wall is designed to be covered with dry wall so the pipes are hidden behind it, which means that the water shut off values need to be inside the cabinet for access in case of repair. If there is an issue with the pipes, we will have to take the drywall off, but I don’t expect that to happen. 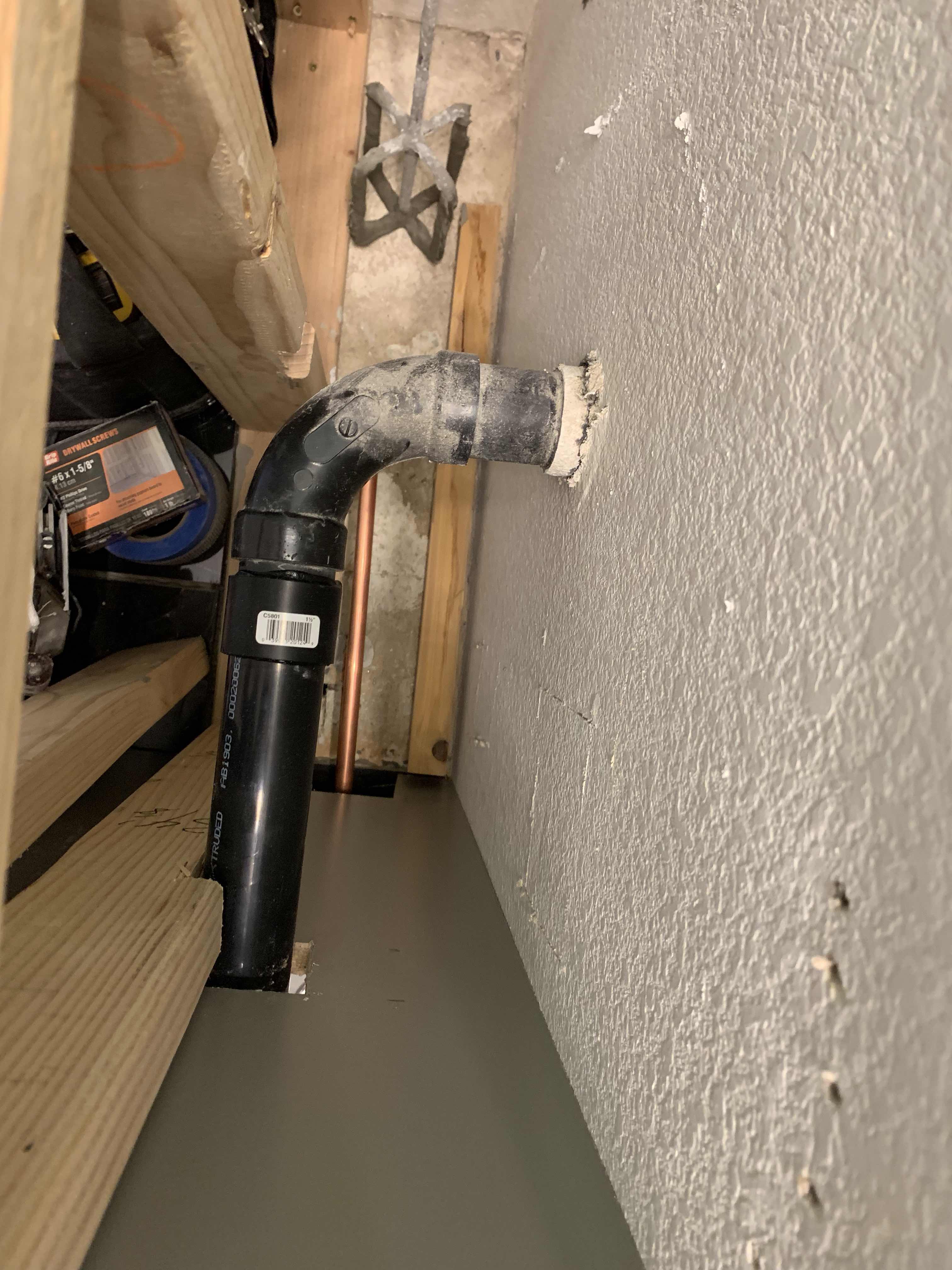 This is the piping with the vanity in. We cut off both pipes a couple of inches above the floor, with the hot pipe about an inch taller than the cold pipe and they enter the vanity from the bottom. The waste water pipe had to go into the middle of the vanity. 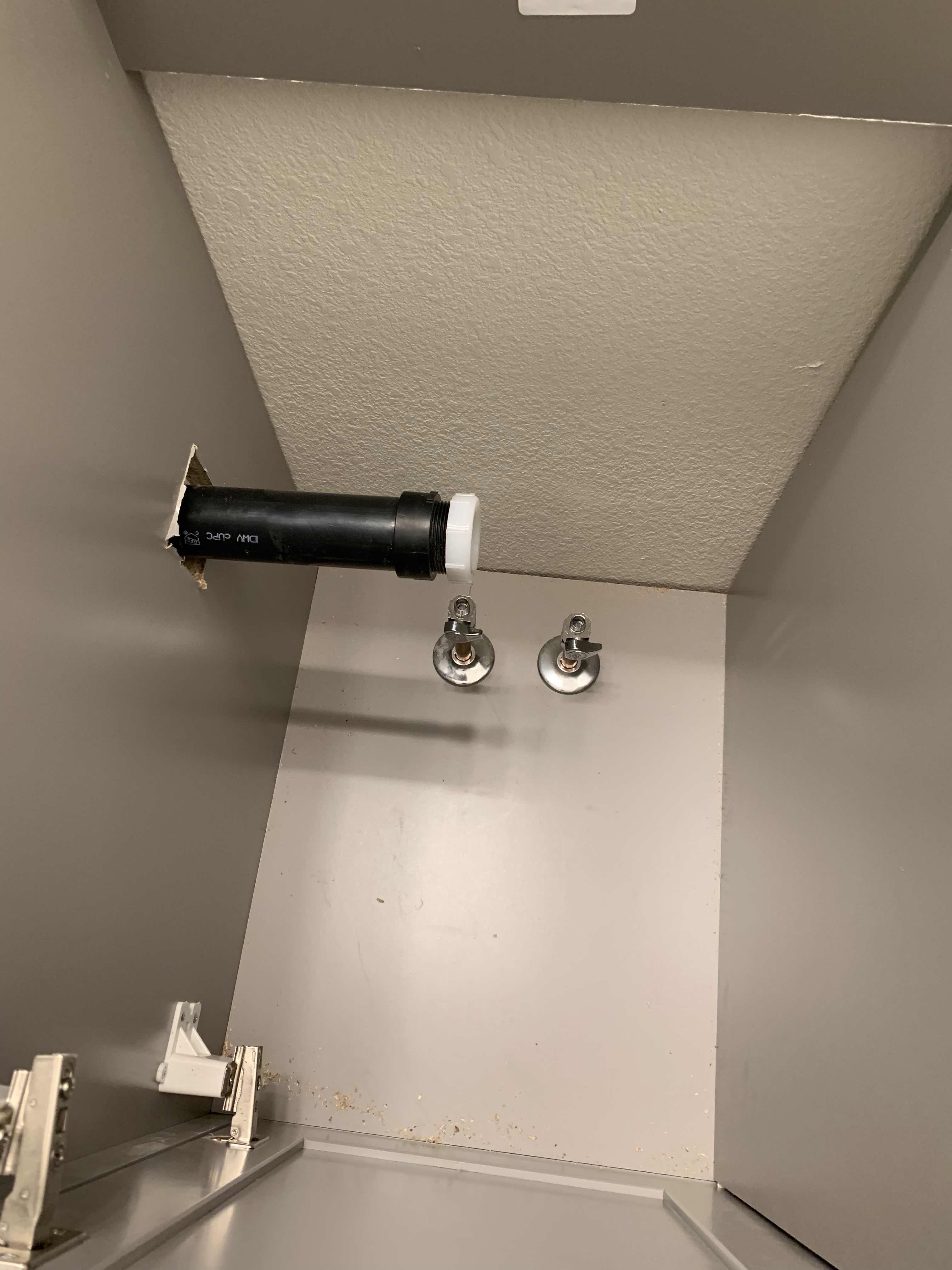 End product inside the vanity cabinet. The waste pipe is long, and not finished, so it can be cut to fit the sink. 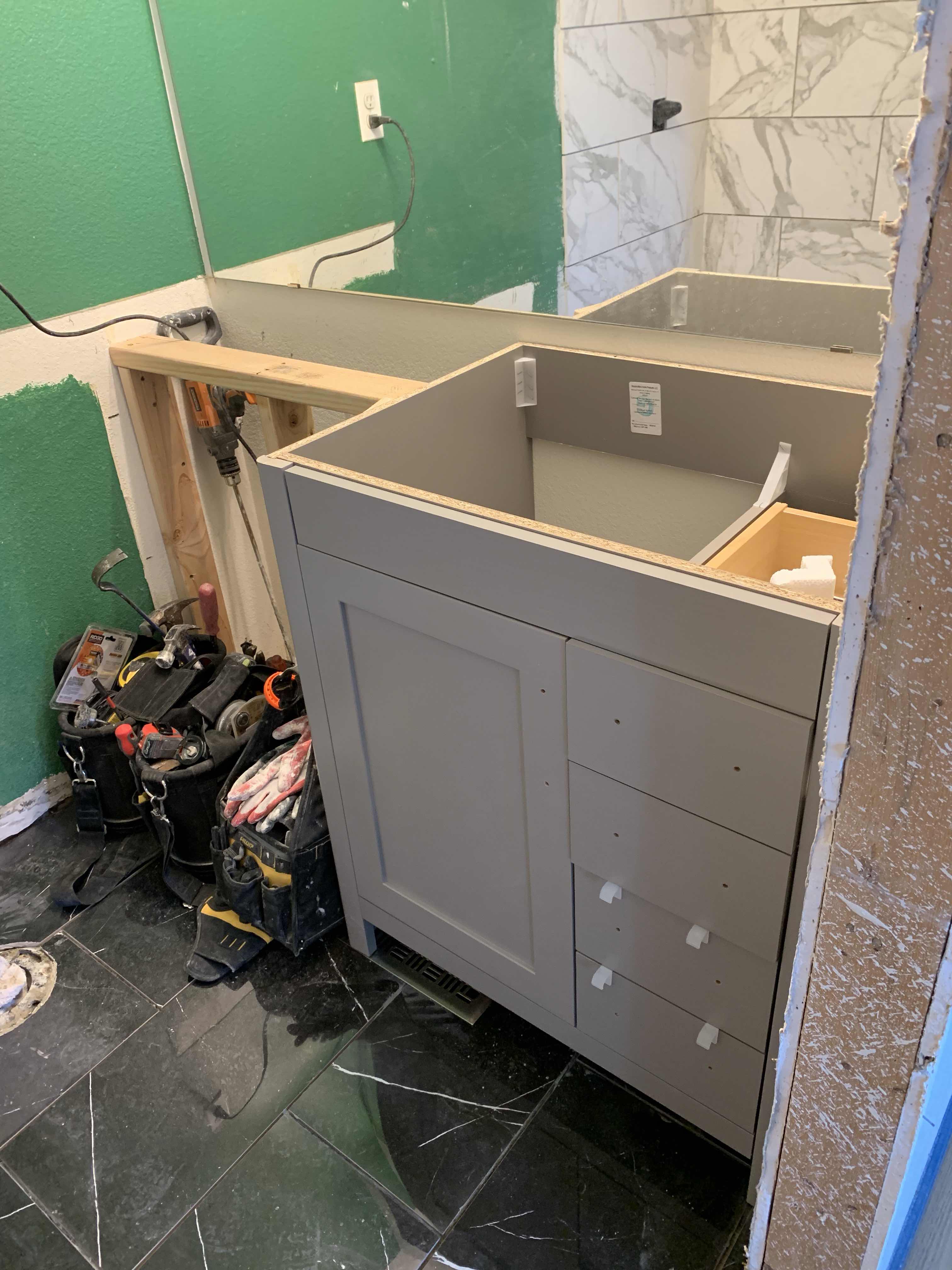 The vanity in place and you can see the heat vent cover at the front edge of the vanity.
The tile still needs to be grouted, the vanity anchored in place, the shower door and toilet installed, the walls and ceiling painted, the mirror trimmed out, the counter top picked out, measured, cut and installed with the sink, the door jamb installed, door trimmed, and baseboards installed.
It’s coming along though.