**I’m having a hard time putting into words what I am feeling in relation to Ashke. I’m trying to describe a unique and wonderful relationship that transcends almost every other relationship in my life, with mere English. I don’t have the right type of thesaurus.
I’ve been thinking a lot about my partnership with Ashke and where we are in our journey. I love the changes I see in his body from the work we are doing. He has a channel down his spine from the muscle built up on either side. That makes me giddy. But beyond the physical changes he is manifesting, I see things in his personality and work ethic that have grown and developed. Several years ago, I wrote a couple of blogs about co-being. http://theeashke.blogspot.com/2013/11/co-being.html?m=0 is one of them. I really loved the idea of co-being with a horse and the adaptations a horse’s goes through to match with their partner-rider. However, I really think Ashke is approaching the status of Companion.
For those of you who don’t know what that means, read any of the Herald series of books by Mercedes Lackey. My favorite of her books is the Last Herald Mage series, which is the set of books where I found Ashke’s name. A Companion is the soul of a human inside a white horse. They can communicate with their chosen, at least in the Last Herald Mage the main character could talk with his mare. That is the closest description of what I feel I have with Ashke that I have found. 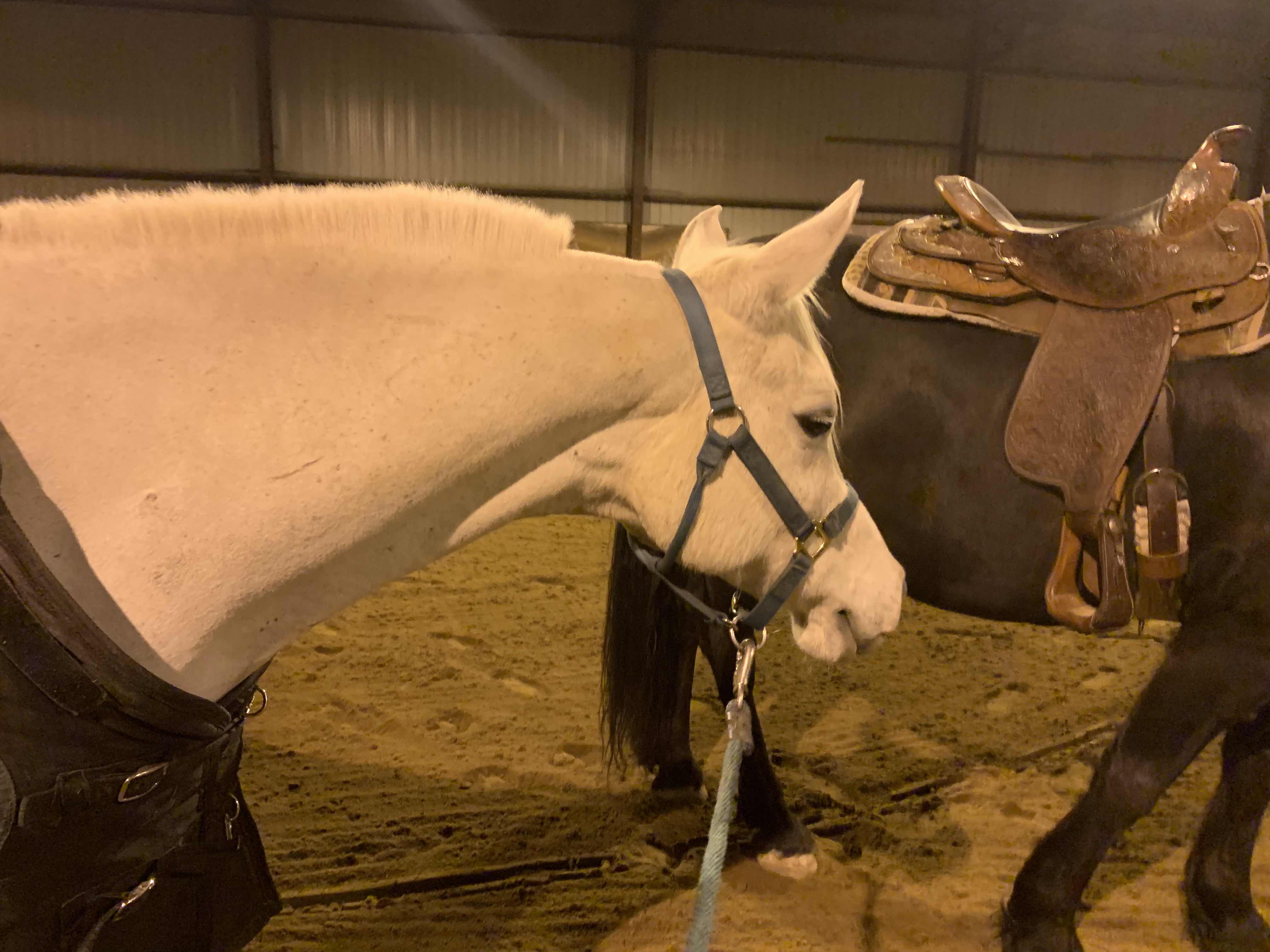 Flirting with Kat
Last night, he greeted me with a bellow when he saw me, which I guess is his standard greeting for anyone who walks through the door. He is in the perfect spot for him, since he is such a social animal. I apologized for having forgotten carrots and pulled him out of the stall. He looks fantastic and his left hock looks great, although his right one is still bothering him, a little swollen, but not hot. He pinned a little when Amanda checked it while I held him, but didn’t move beyond grumpy face. He was moving freely and wanting to explore all of the arena. We did one circle when he looked at me and told me he was cold. We went back in and I threw the blanket back on him. He didn’t need to be fighting the cold as well as the pain in his hock.
Handwalking is a chore for both of us and he is not really very happy right now. He likes feeling special and his partnership with me is really developing as we work on the flying changes. It feels to me as if he understands that we are working on harder stuff, and he likes the progression. He was a little upset that we weren’t riding tonight, and spent a lot of time shoving me around with his head. Not in a rude way, but more of a “mom, why am I in time out” way. He knows that he hurts, but he wants to try anyway. I had to be the adult and tell him we aren’t in a hurry.
I’ve heard that horses that progress in any sport develop self-esteem (at least those who are enjoying their work) from their advancement, and I think that is true of Ashke. He feels special and now he feels like he is working in conjunction with me, rather than in opposition. He just flat out feels happy. But he also feels super proud of himself. Proud of me. Proud of us together. 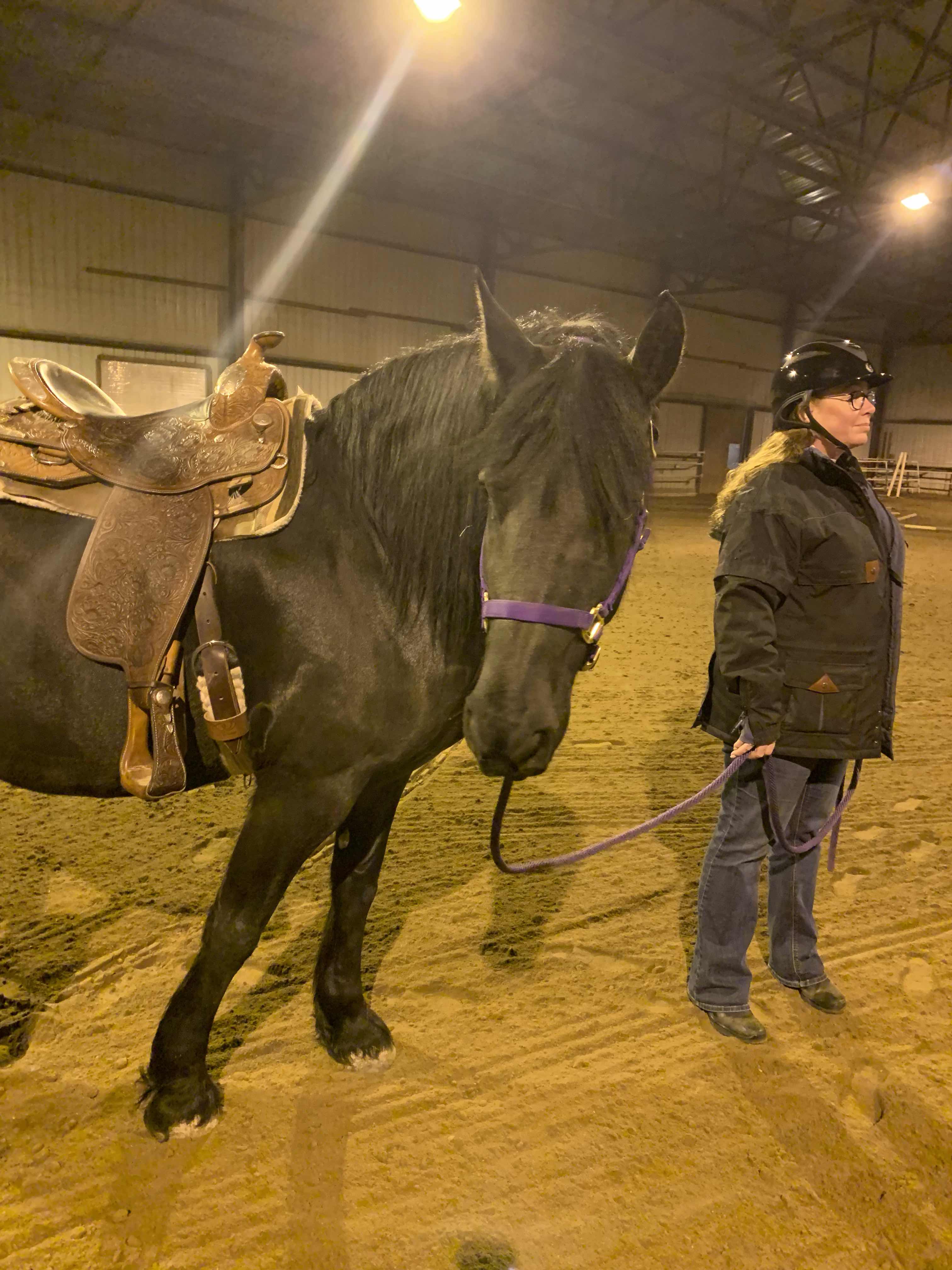 Flambé and Kat
It’s a different experience, feeling like we are pursuing our training together. We have moved beyond the “me showing/telling/expecting him to do something” to a more collaborative partnership. He is seeking the knowledge, and trying to figure out what we are doing next. He is even beginning to quiet his “offer” which I see as a trust in my request, that he won’t be punished for not getting the answer correct or quickly enough. And that I have a reason for waiting for the change in bend or the change in lead. We are beginning to figure out how to dance with each other, where the slightest shift in pressure in your partner’s hand indicates a change in direction/movement/steps. We are seeking the quiet and the subtle, which is awesome to experience. I have been really impressed with his thinking through what I am asking, figuring it out in his down time, and coming back the next ride to increased sensitivity or understanding of what I am asking. I do the same thing, laying in bed right before sleep, riding whatever we are doing in my mind, trying to quiet my body to just the shape of the aides. I feel like we are working toward the same goal. 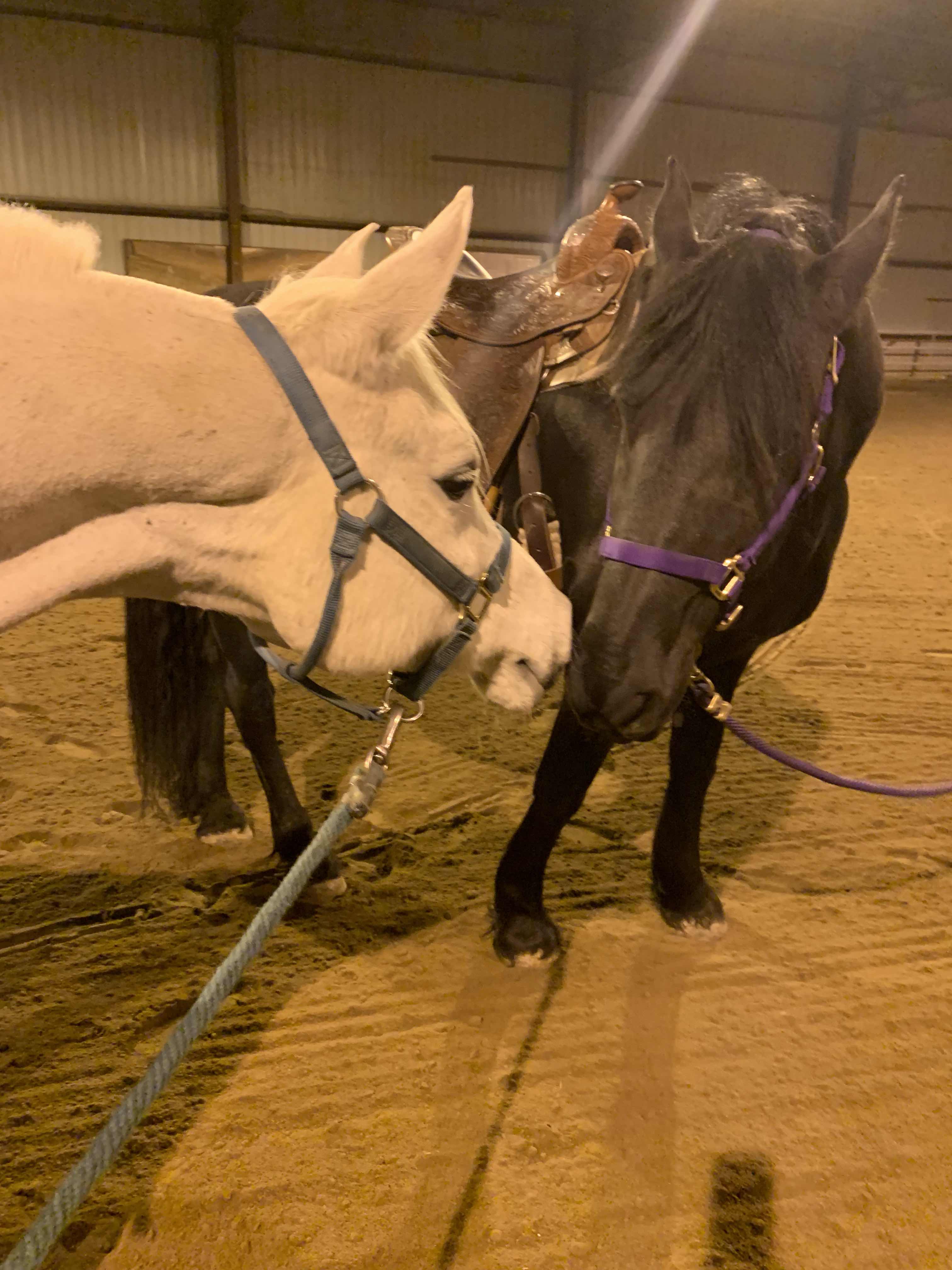 Pretty boy and slightly grumpy girl
So, two more nights and then we can start working on our stuff again. I think he was a bit sad and jelly of Rain tonight, since they usually lesson together and she was flying around showing off her changes left and right. We are going to put Rain in the run next to him this spring when the mares come in from pasture to have their babies in the big box stalls. I’m pretty sure Ashke will be beside himself to have littles in the barn. And he will enjoy having a horse in the run next to him.
Posted by Cricket at 10:25 PM